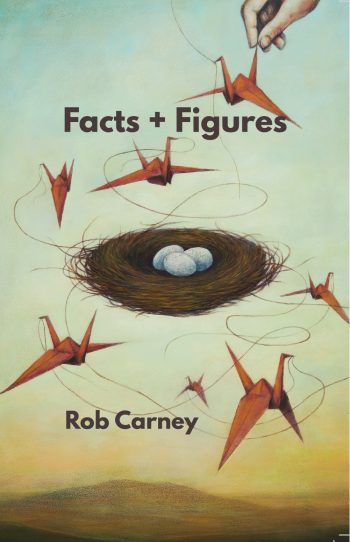 Rob Carney’s Book of Sharks (winner of the 2019 15 Bytes Book Award for Poetry) was a ferocious tour-de-force. The poems in Facts + Figures are more gentle, though not entirely toothless. Carney, whose poetry is grounded in the re-enchantment of the world, begins the collection with a sequence titled “Thirteen Facts,” but he falls off the fact-check wagon almost immediately. By the second poem, Oregon’s Crater Lake already has an anthropomorphic voice that ponders, “Was I warmer when I used to love the sun, or always cold like this?” It’s characteristic of Carney’s writing that his poetic inventions seem just as true as the facts that inspired them. In another poem from the sequence, a storm front moving over the Wasatch Front makes him think, “That clouds aren’t just one mass, for starters. And second, where bison come from.” In a classic Carney twist, the bison descend from the sky in order to graze on prairie grass fed by rain and snowmelt. But isn’t this also a fact? Without rainwater, prairie bison really could not exist. Taken as a whole, the “Thirteen Facts” sequence is about drought and wildfire, and so at a larger scope it is also about climate change affecting the ecology of the American West. Ever the teacher, Carney ends the poem by assigning homework. Suppose one morning a deconstruction crew arrived to dismantle the built environment and restore it to a wild state? Professor Carney prompts you to continue thoughts that arise in the poem: “This is your midterm, and yes it’s still due Monday. What weather is best for a morning like that, sunny, rainy or overcast? In 623 words, explain your reasons why.”

Carney’s poems are deceptively simple. The straightforward language draws you in with storytelling, humor and a kind of faux naiveté and then shifts direction. You think he’s played out an idea but it pops up again in another poem and another context, giving thematic coherence to the whole collection. The homework assignment reappears in the contents of a lost backpack “scattered like leaves across my yard” by an (imaginary?) third-grader named Jesús, whose poorly spelled report on space exploration explains, “Fact 1. Utah look so much lik Marz that Marshun Moovy’s make there moovy here. Lookit up.” To Carney’s delight, Jesús has focused his childish obsession with outer space on a heart-stopping comparison between a spaceship and an origami swan.  “If it weren’t for the swan, that anchor in their story,” Carney wonders, “would it stick? Would anyone hold still and listen?”  Now that Carney has drawn attention to the origami swan, it’s impossible to ignore. Can it really be true that scientists fold origami spaceships and send them to Mars? Carney’s mythmaking is such that the reader feels compelled to follow Jesús advice and look it up. Sure enough,  NASA scientists, inspired by the ancient Japanese art of paper folding, have built spacecraft designed to unfold like flower petals once they enter zero gravity.

Carney’s obsession, as always, is the intersection of nature, human beings and the built environment. His scientists use microphones to record the calls of Orcas, “then listen as they badmouth dolphins.” His engineers are inspired by the waterproof feathers of ducks to invent GORE-TEX, while the ducks themselves fret about the best color of yellow to use for a Duck Crossing sign. Even as human scientists are observing them, sentient animals are always watching back, often with an attitude of curiosity and perhaps unwarranted goodwill. In Carney’s eyes, the world is full of ecological wounds, but it nonetheless offers a possibility of kindness, as in the poem “Since Some Crows Used to be Angels,”

A woman standing at her mailbox, for instance …
not junk this time but an unexpected present.

A crow flies over, then circles back
to memorize her smile.