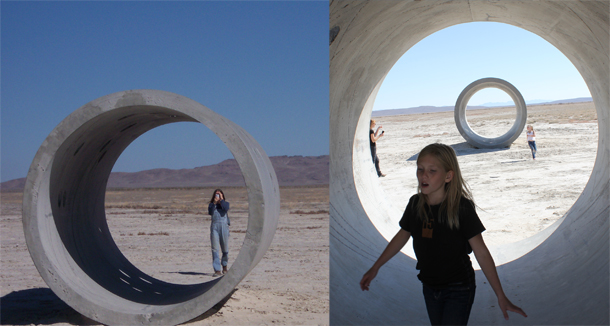 Last weekend I was with my family at the Sun Tunnels. Two weeks before the big Nancy Holt event, and on a Monday to boot, we thought we might have the place to ourselves (see below for tips getting there). Two other lovers of art and the desert had beat us there, however.

Actually, they were artists, and when they noticed the 15 Bytes t-shirts members of the family were wearing, they struck up a conversation. They were big fans it turned out (a fact I asked them to repeat loudly and with enthusiasm once the children were within earshot).

One had even decided to move here because of 15 Bytes (okay, there might have been additional reasons, but apparently our publication sealed the deal).

“I was trying to figure out if I should move to Salt Lake City and Utah when  I came across 15 Bytes,” Judith Dierkes was kind enough to email us afterwards (so we’d have it for the record). An interdisciplinary artist originally from Tennessee, she says, “After viewing the latest edition of 15 Bytes I was sold on moving to Utah. I’m not disappointed. The art scene here is vibrant. Now I look forward to my subscription each month.”

Do you look forward to your subscription?

Judith has sent us a donation to hire 15 Bytes for another six months. Will you? 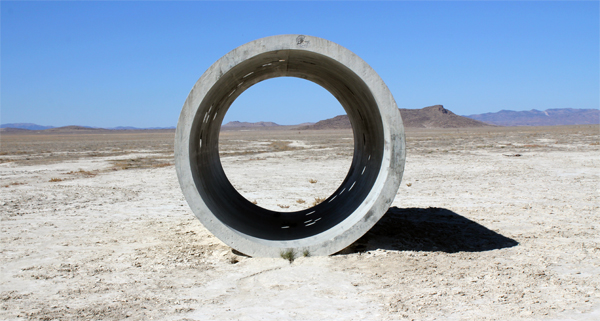 GETTING TO THE SUN TUNNELS:

There’s a dirt road that goes from the Salt Flats to the Sun Tunnels, but it’s apparently pretty rough and may not save you time in the long run.

We drove on I-80 about 30 miles into Nevada, took the Oasis/Montello exit (378) which takes you back into Utah. (Montello, NV, which is close to the border, is the only place for gas/food). Ten miles across the border there’s a sign for Lucin, to the south.

We followed this guy’s directions, which were good – http://users.wirelessbeehive.com/~paw/SUNTUNNELS.HTML

You’re only on a dirt road (improved) for about 5 miles so you can do the trip in any type of car.

Go over the fence at Lucin. It’s worth taking a peek at the little oasis there.

You can go back the way you came. Alternately, when you get back on the highway, take route 30 east. It’s a lonely road (i.e. no services), but will bring you up to I-84, which will drop you into Tremonton. Probably the shortest route for those in Weber County.