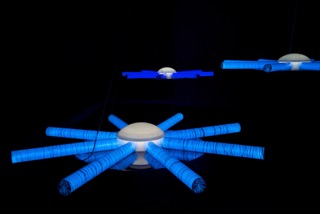 New York and London’s David Zwirner Gallery just closed a show by the West Coast video artist Diana Thater that The New York Times called “spectacular”. Salt Lake City artist Trent Alvey, who herself blends art and science in her work, says a news release from the gallery explains that scientists have learned that dung beetles navigate at night by the stars of the Milky Way. If the sky is blocked, say by street lights in urban areas, they wander aimlessly. Diana Thater, The Times says, “is obliquely addressing a global ecological problem.”

Alvey tells us: “I love this work because, first, I’m a sucker for floods of blue light (evident in what Thater has created) — I have done four blue neon installations. Second, I am usually inspired by the duality of science and intuitive knowledge. Plus, I watched many dung beetles in Namibia. They work very hard with their back legs to roll a little hunk of elephant dung somewhere. Also, I was riding in an open truck in Namibia and was hit in the forehead by a low flying dung beetle — almost knocked me out.”

Alvey is comparing her 2007/2013 work entitled Creator/Destroyer: Splitting the Plutonium Atom, with what Thater has done. It has Sanskrit lettering around the center dome quoting Robert Oppenheimer, who quoted the Bhagavad Gita upon seeing the first atomic bomb exploded in the White Sands Desert in 1947: “Now I have become Death, Destroyer of Worlds.” Alvey observes, “Atomic energy is the most awesome energy on the planet for both good and evil.”