What We’re Working On

The most exciting art event of the past month, the one that drew the largest, broadest, and most enthusiastic crowd of Utah art lovers—young and old, amateurs and pros, from those who can’t stop making art to those who just love to look—wasn’t the opening of an exhibition of sought-after paintings or sculptures or the rare transformation of a dry score into an exquisite performance. Yet for many of those who filled Kingsbury Hall last Tuesday night, the appearance of Christo, the surviving half of one of the best known art-making couples in history, going through his well-practiced patter while clicking through what amounted to his family slideshow, was like finally seeing Bob Dylan or the Beatles in person. If art is the accompaniment to ones life, the work of Christo and Jeanne-Claude might just be our anthem. If there was any note of sorrow or regret that Jeanne-Claude, who died of a ruptured brain aneurysm eighteen months ago, three years after the long-awaited staging of “The Gates” in New York’s Central Park, could not be there too, Christo dispelled it with his high energy, his humor, and the joie de vivre of a man who, sixty years after he began to make art, still wakes up each morning excited by the prospect of what the day’s work will bring.

Christo, after all, is one of the most recognized names in modern art. Yet like only a few of those names—Van Gogh comes to mind—and unlike so many others, his name reminds everyone, even non-specialists, of the look and accessible significance of his art, rather than just a specific work. Not just a soup can, or Mona Lisa with a mustache; Christo has associated himself world-side with the wrapping of unlikely objects, from the oldest bridge in Paris to the coast of Australia. He and Jeanne-Claude never repeated themselves, but some echo—for example, in the relation between a giant umbrella and an island surrounded by floating fabric—marks both as sharing the indefinable something that carries their names. The man behind the name is now 76, grey, gnarled, bespectacled, but far from showing signs of slowing down. He paced Kingsbury’s stage, gesturing so eloquently with his body that at times pantomime served him better than his still Bulgarian-accented English. Whether questioned by those in the audience or Doug Fabrezio, on his KUER program Radio West, Christo listened patiently for the question, then launched into an expansive answer, sometimes running for minutes through his art-making history, tossing off the names of those he’d had to persuade and the dates that give form to one of his art’s most visible dimensions: the years it takes to configure an idea, find a place for it, and shepherd it into being. Even the skilled professional interviewer failed to rein him in, and when time was called he paced off the stage like a tiger following a scent to the next encounter.

Watching this display of vigor from one of the seminal figures in present-day art, I couldn’t help wonder what if would be like to see Robert Smithson, if he were alive today, standing next to Christo while the two took turns pointing out the similarity and difference between two of the most charismatic approaches to art making of our time. Smithson lives forever in photographs, films, and memory as an intense young man: one whose departure from the scene almost four decades ago robbed us not only of an unknowable wealth of work, but of the experience of seeing him approach Christo’s weathered state. Yet who can doubt that Smithson, who would be 73 if still alive, would have made a fascinating counterweight to Christo? Smithson’s works bucked the dominant trend of art fifty years ago by beginning in the museum and moving into the world. He broke with almost the entire history of art by making works that existed in multiple media simultaneously: as artifact, as documentary records such as films, and as subjects for thoughtful presentation in, say, the words of an essay. Imagine how his creations, which came into being in intermittent, multiple forms, flashing into perceptible form only to disappear and then reappear, would complement those of Christo and Jeanne-Claude, which existed as slowly-evolving plans and proposals, bureaucratic procedures and manufacturing challenges for years before becoming fantastic events that flashed into palpably perceptible events for a comparative instant, only to disappear back into the representations that preceded and shepherded them into being. 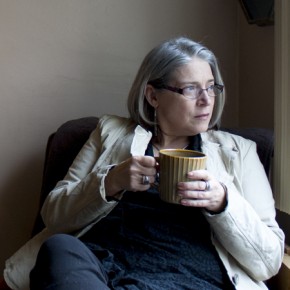 About as close as one can come in this world to that incredible encounter was the sequential appearances of Christo and Hikmet Loe on Doug Fabrezio’s “Radio West” on Tuesday, April 19. Listening to the two of them speak in turn allowed an understanding to emerge, possibly for the first and certainly for the clearest time, of the powerful impulses shared by these two artists. Like Newton and Leibnitz inventing calculus, or Leonardo and Michelangelo embodying Renaissance willfulness, the team of Christo and Jeanne-Claude and the solitary fountainhead of ideas that was Smithson, working independently and with apparently little interest in or knowledge of each other’s work, brought working methods and approaches together from the preceding century of art ideas and showed where they led. Both have been described as mysterious, but the truth is that few artists in history have been more candid or forthcoming in discussing their works. As is so often the case, it is only now, with two-thirds of their voices silent, that public interest in the details is catching up with the accomplishments. Fortunately, Christo can speak for himself, and never forgets to add Jeanne-Claude’s voice: “We have a love and tenderness for that which doesn’t last,” he lovingly, tenderly, and frequently quotes her saying. But we in Utah are fortunate to have more than one Smithson scholar in our midst, and most particularly to be able to call on Hikmet Loe, Westminster College’s popular adjunct professor of Art History, who may be the best-informed Smithson specialist ever. How she came to be that, and how she came to be here, are interconnected stories, but not in an obvious or simple way. Teasing apart the way they spiral together will occupy our May profile.