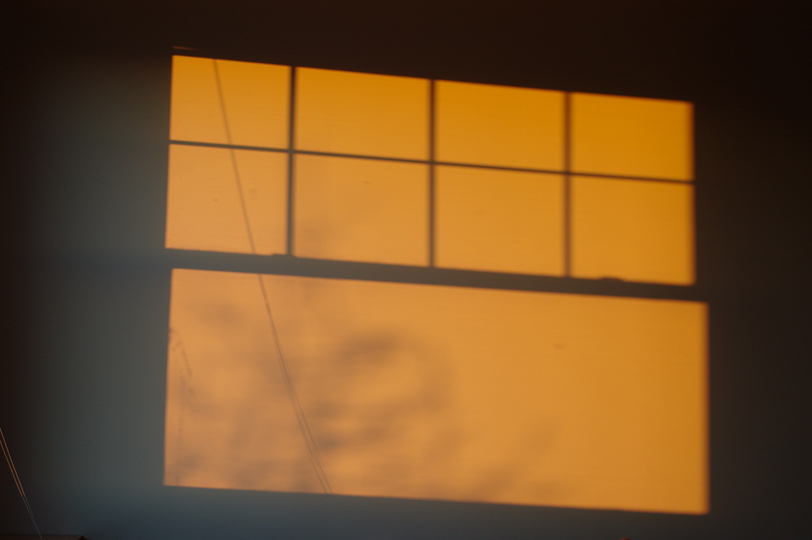 Of the eight artists showcased in the current Faculty Art Exhibit at Westminster College a majority are not permanent members of the faculty. Unlike some small schools who end up with a few teachers who have been there for a long time and don’t really function as artists outside of the school environment, the Westminster Art Department hires many different interesting artists to teach on a changing basis. This arrangement benefits the students by allowing them exposure with working artists who bring their involvement with what’s current in the world of art to the students. The result is an outstanding faculty show which is well worth seeing.

Anthony Siciliano’s series of lambda prints (in which color photographic paper is digitally exposed with a laser) seem more successful, despite their slickness, than his other more individually crafted work. The lambda prints are in vertical format with rounded tops which seem to refer to the shape of church windows. The images were created by a digital blending of Renaissance religious imagery and photographs of modern urban fragments and details. Overall, they form a pleasing texture, not unlike that of a stained glass window seen from afar.

David Baddley’s large photographs flatten space by combinations of near and far elements, shifting focus in unexpected ways. The most effective images, though perhaps less photographic in appearance, are the sequence of three titled “Winter Light at Sunset North Wall of Foster 415.” These record sunset light projected through a window onto the wall across the room. The glow shifts and blurs, presumably with time, becoming a field of color reminiscent of a Rothko painting. 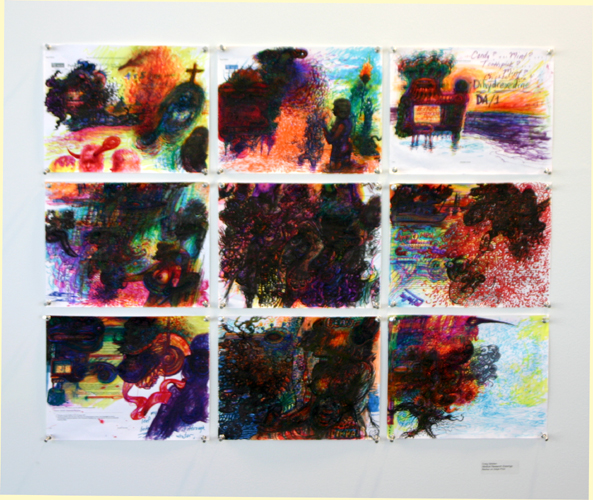 Craig Glidden displays a series of “Medical Research Drawings,” marker on printouts of web pages discussing the properties of psychotropic drugs. Although perhaps visually predictable – all the usual psychedelic imagery is there – they possess an immediacy that adds force to their presence.

Kristina Lenzi’s paintings “My Hell” and “RePainted” are tightly composed but preserve a feeling of spontaneity. In “My Hell,” tracing paper adhered to the canvas peels like skin coming off after a painful sunburn. “RePainted” shows what seems to be an aerial view of islands – or are they cells? Complex structures are invaded by fluffy globs of white paint. 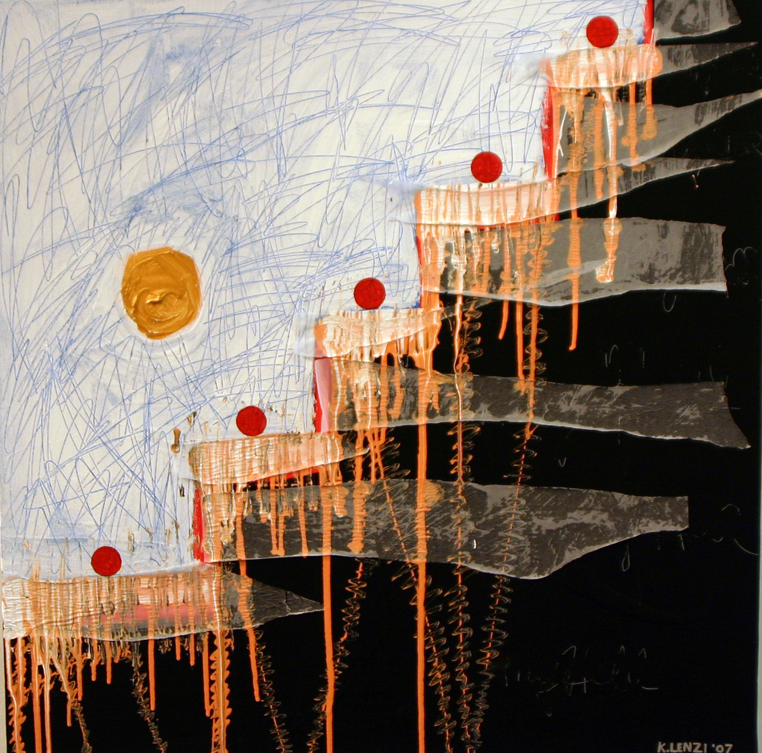 Jimmy Lucero’s three large canvasses featured his trademark wind-up toys. In the most interesting one, “Teetering on the Edge” the toys are transported to Gericault’s “The Raft of the Medusa.” One of their number has already fallen into the dark seas and the rest appear to be held on the raft more by threads of friction and inertia than gravity. 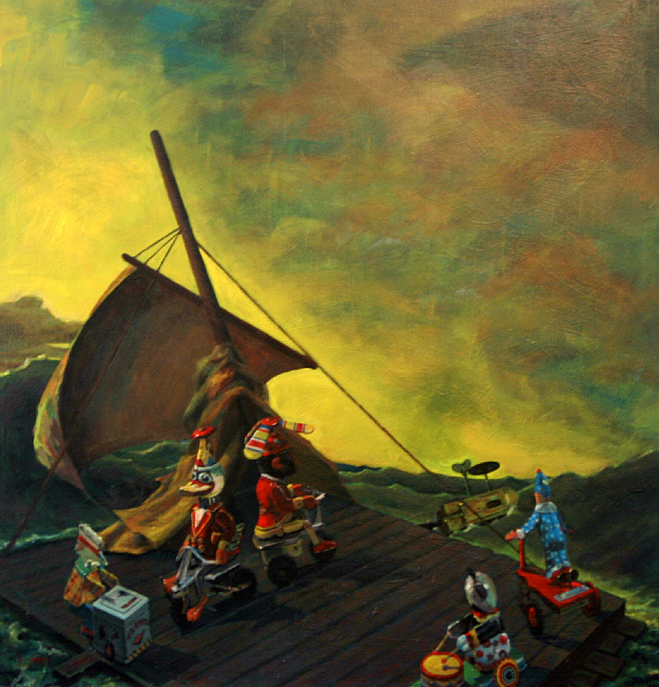 Jimmy Lucero, “Teetering on the Edge

Kay Kuzminski shows a series of ceramics decorated with whimsical cats and fish against a black background filled with meticulously placed white dots. The cats, some of which are dressed as superheroes, seem uninterested in the fish which float through and share their space. Her work has the assurance and level of finish which reflects her great experience with the medium.

Suzanne Simpson exhibitsa group of mixed media works. “In Pursuit” and “Fragile Beings” are exquisite collages in which the organic – birds’ eggs, dried flowers – play against the ordered – a grid structure and fragments of illuminated manuscripts. The feeling of delicacy is such that even the heavy rusted washers used as grommets to hang the work unframed seem characterized more by the delicacy of their surface texture than by their obvious weight. 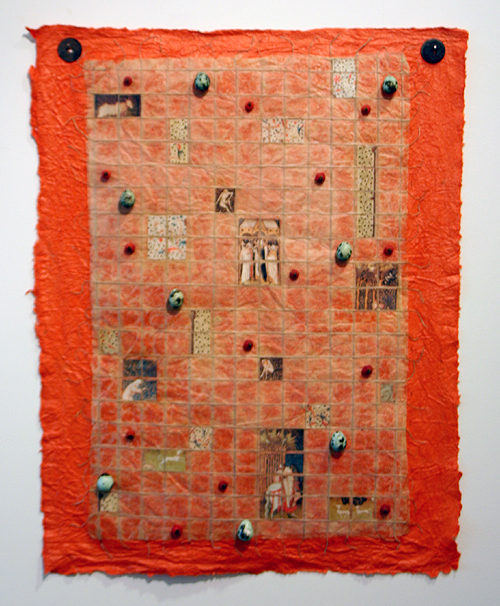 In William Emerich’s “The Other Room,” light seems to be literally blowing through a window as if propelled by wind. This piece was for me his most immediately arresting work. His quieter, monotone trio of paintings of deteriorating stone walkways requires and rewards a more attentive contemplation.

The exhibit would benefit by the inclusion of statements from the artists about their work. Artists’ statements, though occasionally banal and sometimes tending more to obfuscate than clarify, at least offer the audience an opportunity to have some comment from the artist about their work when we are not able to speak with them or make their acquaintance personally. 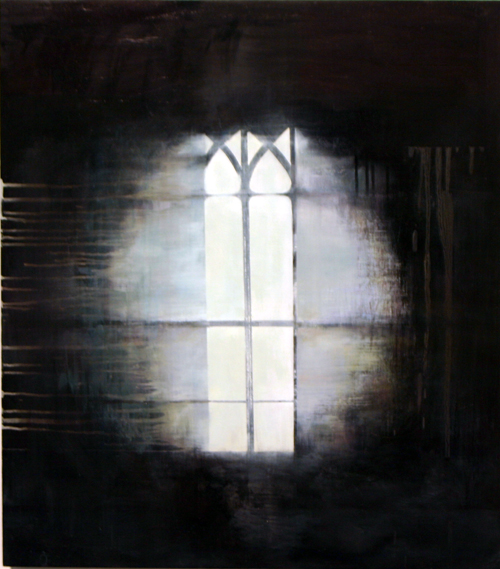 William Emerich’s “The Other Room”

The Westminster Faculty Art Exhibit remains on view through November 20 in the Tanner Atrium at the Jewett Center for Performing Arts at Westminster College, 1840 South 1300 East in Salt Lake City.