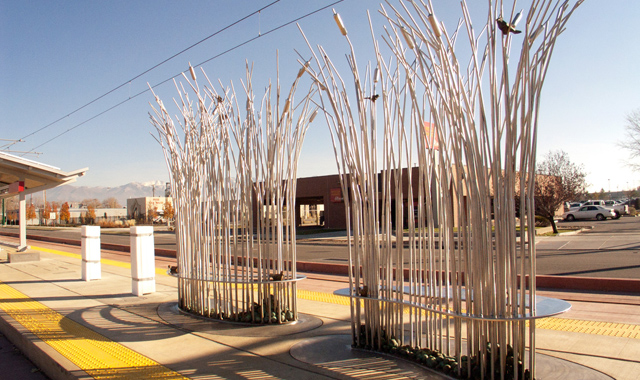 The decisions to place public art pieces at the six stations on the new TRAX line was far from an afterthought. In fact, it was just the latest iteration of a longstanding collaboration between Utah Transit Authority (UTA) and Salt Lake City’s Public Arts program, which is part of the Salt Lake City Arts Council (SLCAC). They have partnered on art installations at 20 stations since 1998. UTA includes funding for art in its budget for new lines and Salt Lake City matches it. Together they select the projects, which are then managed by the Public Arts program. UTA makes sure that art designs comply with transit safety regulations and are compatible with the operation of trains and the flow of people using them.

According to Brandon Bott at UTA, the transit agency “sees public art as an important way to build a sense of community ownership for TRAX and FrontRunner rail stations. It provides communities with an opportunity to express their identity — who they are, where they come from and what values they hold — through art. UTA and the Federal Transit Administration appreciate the role art can play in making rail stations into more attractive, vibrant spaces, which is important to building ridership.” UTA now has public art in 45 stations — almost three quarters of all UTA rail stations.

Roni Thomas, who heads the city’s public arts program, explained the process of soliciting and selecting public art for the airport line: Two of the six stations on the line (850 W. and 1950 W.) were opened to proposals by Utah artists. Artists for the remaining four stations were selected from a national call for qualified artists and interviews by a selection committee. It just so happens that one of those selected is also a Utah artist.

Though the selection committee was open to all sorts of ideas, “we wanted to capture the neighborhoods,” said Thomas. “We wanted each station to reflect its particular neighborhood – the natural environment and the built environment.”

The third Utah artist whose work is included on the new airport TRAX line is Shawn Porter. Reflecting on the 1950 West station, which serves the Utah State Library for the Blind and Disabled, as well as the state’s Department of Environmental Quality, Porter decided to reference the nearby wetlands of the Jordan River and the Great Salt Lake in his design. Thus, his sculpture uses stainless steel, copper, and bronze to suggest the wetlands of the Great Salt Lake.

Sections of pipe are welded together to represent reed grasses coming out of a surface of stainless steel polished to simulate a water surface. Copper spheres and hemispheres suggest river rock, while three bronze birds represent the wildlife of this special Utah habitat.

Perhaps the most intriguing aspect of the sculpture is the text in the surface of the stainless steel surrounding the reed grasses, which describes in poetic prose the Great Salt Lake. The text is in Braille to enable blind TRAX patrons to interpret the sculpture and also learn something about the Great Salt Lake. This part of the sculpture was also the most challenging and frustrating, says Porter. “When I had the stainless steel plate cut, I had rectangular plates cut out of the surface. “ He wrote the description, had it translated into Braille with help from staff at the University of Utah’s Marriott Library, and then had a machinist cut holes for each of the Braille characters. The holes were then filled with little pins that allow the blind person to read it.

Porter had never welded stainless steel, so he was challenged to weld the text plates into the rest of the stainless steel surface without contaminating the stainless with bits of other steel that could cause rust marks. He wanted the entire surface to be perfectly smooth and seamless, except for the Braille text, which offers sighted viewers an interesting textural contrast. “Visually it’s interesting because it’s essentially a language floating on the surface,” says Porter. “Also, it references the way our environment contains stories.”

As part of the creative process, Porter made some samples of the Braille text and asked Braille readers at the Marriott Library to try them out and tell him which hardware was the easiest to read.

The writing itself was also challenging. “I realized I was basing the description [of the Great Salt Lake] on visual reference, what it looks like,” says Porter. “But then I shifted my approach to bring in some of the tactile aspects of being on the Great Salt Lake.” He broke it down into geographical areas of the lake and included sounds (water slapping against a boat), smells (like ocean), and feel (tall grasses brushing against arms).

These three Utah artists with their firsthand knowledge of the area could be expected to share vibrant stories of the Westside neighborhoods. But even the out-of-state artists whose works are installed at the other three airport line stations did their homework and have stories to tell.

Catherine Widgery of Cambridge, MA, designed “Crystal Light” for the North Temple Bridge/Guadalupe Station. Her work attempts to capture the energy of the city and its people through light and reflections of color and movement in the surrounding environment.

Nancy Gutkin O’Neill of New Orleans, LA designed “Fairpark Convergence” for the Fairpark Station after researching the Fairpark neighborhood. Her work is a glass collage of maps, images, and fabric that evokes the ethnic diversity of the area, as well as of the geology and the area.

Gordon Heuther of Napa, CA was selected for the Airport Station. His design references Utah’s red rock canyons with it’s burnt orange steel plates cut in a mountain range silhouette that is part of the fencing separating the platform from the street. Spaces between the steel plates give motorists a feeling of a moving picture as they drive by.

Of course, the public art will be there for you to see anytime you zip to the airport on TRAX. But April 19 is your perfect opportunity to leisurely stroll the line on a free pass and to learn the stories, starting with the exhibition at Mestizo. Hope to see you there.

In conjunction with the Salt Lake Arts Council, Artists of Utah presents Art in Transit and West Side Stories Friday, April 19, 6-9 pm. Start at Mestizo Gallery, 641 West North Temple, Salt Lake City, UT for Erik Daenitz’s photographic history of the Westside along the TRAX line, and then travel the new airport TRAX line, stopping at each station to view public art. The first 200 patrons will receive free tickets courtesy of UTA.