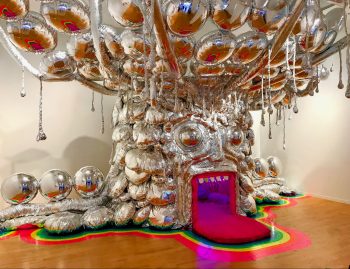 Ogden, UT (July 12, 2021): This August, Ogden Contemporary Arts presents Flaming Lips front man and mixed media artist Wayne Coyne and his “immersive head trip fantasy experience,” King’s Mouth at OCA Center in Ogden, Utah. Coyne’s audio-visual art installation is featured with 14 original art pieces that tell the fantastical narrative of the King’s Mouth through multi-media collage. This iteration of Coyne’s traveling art experience has been adapted specifically for OCA Center and will also include a new animation component in the digital gallery. The show opens with The King’s Stroll on August 6th, a ticketed event during Ogden’s First Friday Art Stroll. Visit ogdencontemporaryarts.com for tickets and additional programming including The King’s Party, which precedes The Flaming Lips’ Ogden Twilight performance on August 20th. Coyne will be in attendance for both events, where he’ll create spin art prints for attendees.

Coyne states: “The King’s Mouth immersive/child-like qualities are born from the same spark and womb as The Flaming Lips’ live performances. The King’s Mouth adventure was made for humans of all sizes, ages, cultures, and religions.” The Flaming Lips’ psychedelic rock shows are theatrical spectacles with elaborate props and incredible energy; Coyne’s creativity on stage translates directly into his artwork, which holds the same bizarre connotations and joyful curiosity as his music.

Coyne debuted King’s Mouth in 2015 for a group exhibition at the American Visionary Art Museum in Baltimore, after which the Baltimore Sun likened it to a cross between “a bean bag, the iconic Rolling Stones tongue, and an acid trip.” The installation is a monumental, tree-like head in glistening chrome, with an open mouth and extended tongue that beckons visitors inside for an all-encompassing sensory experience. LED light strands rain from above, pulsing with instrumental music created specifically for the experience. “You’re feeling it as much as you’re hearing it,” says Coyne in a making-of-the-mouth video series, which will also be on display for the show. “Once the sound and movement is connected it really is like this thing is telling you a story.”

The mythic story of the King’s Mouth is illustrated in Coyne’s accompanying art pieces, which inspired the lyrics of The Flaming Lips’ 2019 album of the same name. In line with the artist’s imaginative songwriting, the story of the King touches on themes of death and rebirth, the inexplicable wonders of the universe, and more surreal introspections. Coyne is adamant, however, for the experience of the King’s Mouth to be subjective; when lying inside and experiencing the King’s vision, viewers are encouraged to interpret it in their own way. And most importantly, says Coyne, “to have a good time.”

King’s Mouth at OCA Center will be its 11th iteration, having traveled to cities across the country including Oklahoma City, Santa Fe, Portland and Nashville. Coyne says the decision to bring the installation to Ogden has been in the works for some time, and he’s excited for it to align with The Flaming Lips’ recurring appearance at Ogden Twilight the same month. “This will be our third year (performing at Ogden Twilight) and now we’ve got this crazy art installation happening at the same time and for me it’s like, wow, in just a couple years Ogden has become this great sort of art-y progressive place,” says Coyne. “It’s really a phenomenal thing that’s going on,” he says of the city’s creative push, spurred by The Monarch and OCA Center, “and of all places – it’s happening in Ogden.”

Ogden Contemporary Arts is a 501(c)(3) non-profit organization that creates and shares globally influenced, culturally diverse, and technologically advanced arts programing in Ogden, Utah. OCA’s vision is to inspire local and regional artists through active involvement with the international contemporary art community. OCA strives to be viewed as a credible and internationally respected art establishment while empowering artists with the facilities, environment and experience to excel in their medium and enrich their lives.