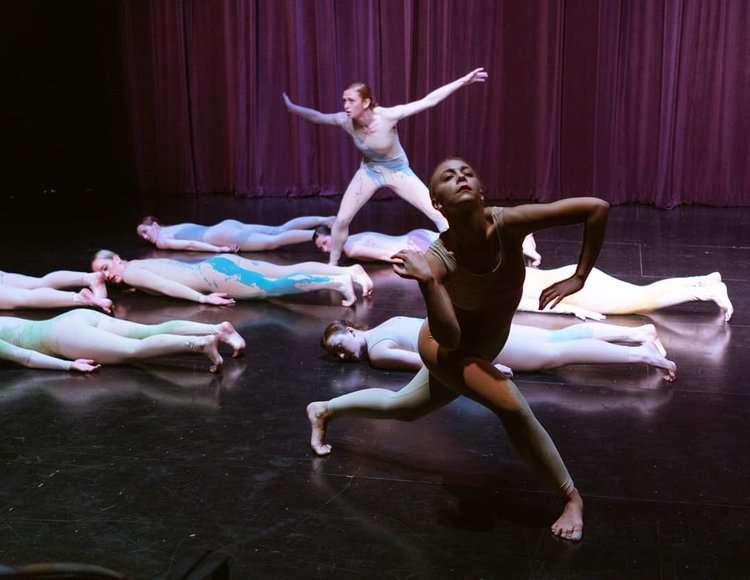 What is contemporary dance?

As a dancer, I have encountered this question more times than I can count; Wasatch Contemporary Dance Company (WCDC) attempted to answer it with Nerve and Sinew. The performance spanned multiple techniques and featured pieces by both established professionals and emerging artists. I appreciated the performance’s variety but, at seven pieces, it felt a bit long.

When I think of contemporary dance, I tend to think more along the lines of the pop — “So You Think You Can Dance” — sense of the term: a coupling of emotion, narrative, and both ballet and jazz techniques. Each of the pieces in Nerve and Sinew included these elements to varying degrees of success.

From a purely performance standpoint, the first act felt questionable: the dancers did not seem to be physically invested in the movement, which left the choreography feeling forced. I am familiar with Eric Handman’s work, so his piece, “Permanent Now,” was, to me, the biggest victim on the program for its lack of energy — it was missing the tension, vigor, and attention to detail that is most often present in his work. On the other end of the spectrum, Lyndi Coles presented a new piece, “Spill,” that was so full of energy that there was a lack of attention to technique in moments of suspension, and instead the focus seemed to be on presenting tricks (i.e., high lifts and the dancers throwing themselves to the floor).

The first act also included a piece by Angela Banchero-Kelleher that invoked emotions and sensations of Americana through its color palette and score. However, the political sentiment expressed in the program notes simply didn’t come through in the choreography. A lack of desperation and of authentic weight-sharing, as well as forced facial expressions, left the piece devoid of any real emotion. That being said, the piece’s ending trio of duets set to Johnny Cash was incredibly satisfying.

The first act concluded with a solo choreographed by Sarah Donohue, “Luz e Lorraine,” featuring Lyndi Coles. It is always a pleasure to watch Coles, and I was excited to see this piece again after first having seen it at Brine last fall. I was slightly disappointed, however, as the characterization of Coles comedically reacting to a spotlight felt completely different from that found throughout the rest of the piece. This stood out to me because Coles is such a controlled and fluid performer — but the moments of comedy looked unfamiliar to her body.

Going into the second act, I was prepared to continue to feel as ambivalent as I did in the first; instead, it felt like a completely different show, each piece more exciting than the last.

I had no idea that the Regent Street Black Box at the Eccles Theater housed floor-to-ceiling windows, but Jocelyn Smith opened the back curtain in her new piece, “Melodic Jargon,” to reveal complementary natural light. The dancers directed both the audience and themselves in rhythmic patterns that provided the score for the piece. The dancing didn’t always match the joy and energy of the rhythms, but the dancers did seem to experience joy.

WCDC also shared a work they’ve performed before, by Brooklyn Draper, entitled “unaccustomed acquaintances.” Out of the whole program, I would argue that this piece was the least “contemporary,” but it was very successful. Each of the four dancers was committed to the awkward movement material and, without necessarily trying to be humorous, the piece felt unexpected in its held shapes, unheard whispers, and embodied characters.

Jake Casey’s “pop.” concluded the program. The company’s performance and ongoing commitment, a strong duet by Coles and Smith, and the piece’s overall intensity made “pop.” the only piece that indicated to me that WCDC is, in fact, a professional company.

I went through a range of emotions during Nerve and Sinew. As a modern dancer, I often hear “contemporary” dance getting a bad rap. However, when it’s performed with commitment and gives a real experience of emotion, it too can be powerful, as demonstrated on this program.

In its 10th year, WCDC will, I hope, continue to define its voice as a company and to hone in on what makes it successful. I could have watched the last two pieces of Nerve and Sinew over and over and would have continued to find exciting new details because of the dancers’ commitment and relationship to the movement. Regardless of the genre of dance in question, it’s those two things that connect performers and audience.