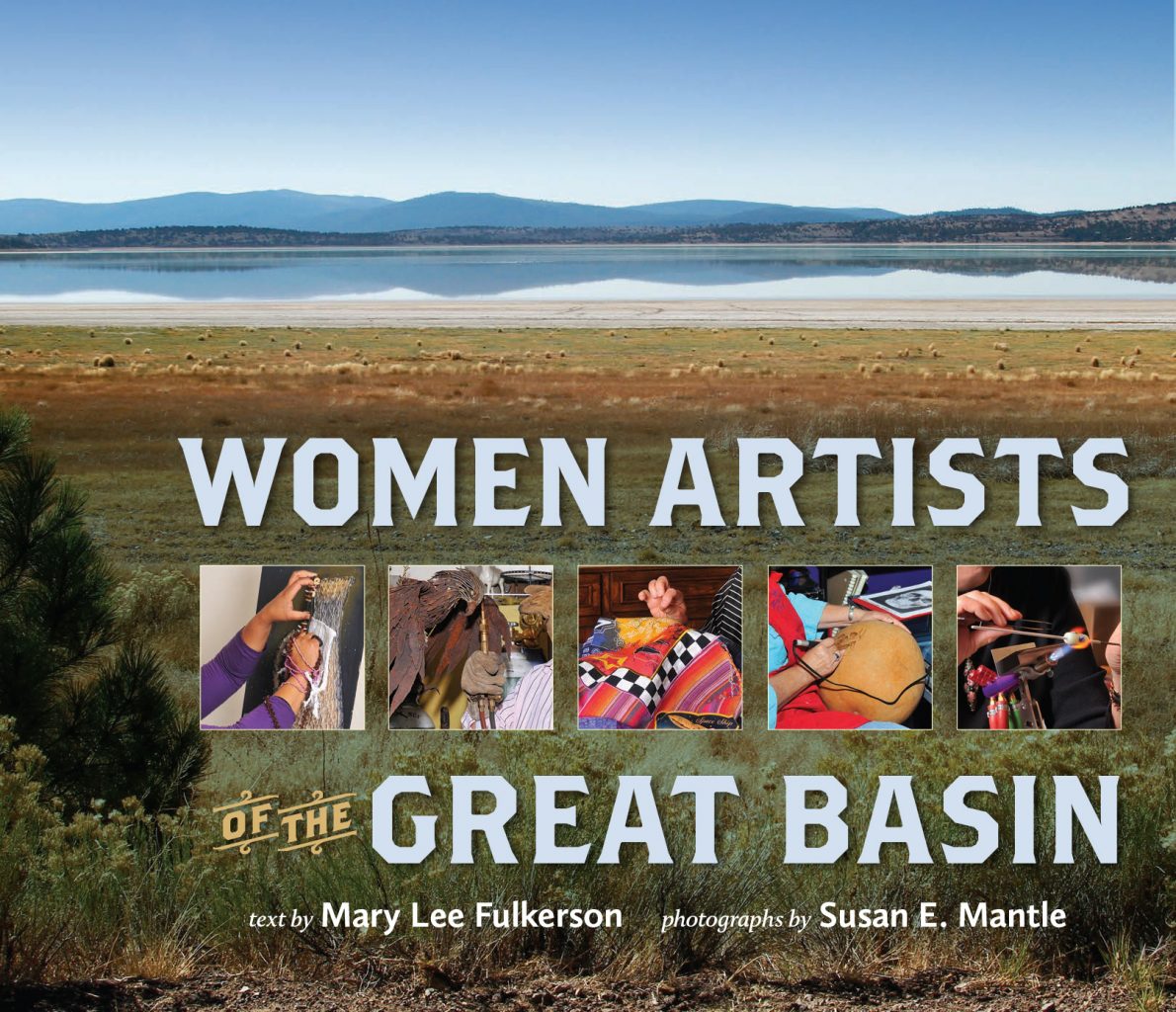 Many years ago, when my larger-than-life uncle drove from his home in Florida to Salt Lake City he arrived at my parents’ house and bellowed, “What a godforsaken place you live in!” Which was shocking to me since I had always considered my homeland one of the most beautiful places in the country. I mean, where else can you get this kind of space, color, light and piercingly blue skies in the autumn?

Women Artists of the Great Basin, text by Mary Lee Fulkerson and photographs by Susan E. Mantle, pays homage to 32 women artists who “prove there is much richness, life, and creativity in what has often been dismissed as a barren desert.” Ranging in age from 50 to 80, these women describe their journeys to art along roads often marked by painful twists and turns, with the added challenges of being largely responsible for holding their families together and raising children. In fact, many of the profiled artists employ techniques familiar to their history as women, like stitching, weaving, making do with less, and using materials at hand. As clay sculptor Gillian Hodge once said, “Artists who work in unnoble materials are opening the door to what art is, can be, and should be.”

All the featured artists work in three-dimensional materials, and their work varies widely from glass, fibers, wearable art, knotting, storytelling with dolls, natural and synthetic mixed media, welding metal to lava rock, and enshrining the Twinkie—which does not decay over time. Three of the artists call Utah their home: Jann Haworth, Pam Bowman, and Sue Cotter.

Jann Haworth has made her mark in the contemporary art world with soft sculptures, life-size figures, and—of course—the co-creation of the Beatles’ Sgt. Pepper’s Lonely Hearts Club Band album cover. She lived in England for 30 years, but moved to Sundance in the late ‘90s, where she created the Art Shack Studios, the Sundance Recycle Hot Glass Studio, and was co-founder of the Sundance Mountain School. Haworth credits her creative energy to living in Utah and says, “Dry air helps you to think clearly, and inventing things is part of the resourcefulness of the West. And when you’re surrounded by desert, it loosens your mind.”

Installation artist Pam Bowman bases much of her art on quotidian tasks, noting that there are “many endless loops in our lives—personal grooming, sleeping, cooking, doing dishes, going to a job day after day.” Her labor-intensive creations illustrate how time-worn small tasks can “help to build strength, build character, and over time result in the ‘becoming’ of a greater, even more holy person.” Unlike many artists, Bowman recycles her materials into other artworks or discards them altogether as her way of not contributing to the “overproduction and excess” of art derided by art critic Suzi Gablik. Perhaps this philosophy is reflected in her sentiment, “You can’t live here without being affected by it” [light and space.] Resources can be tight in the Great Basin, and one must make the most of what one has.

Fulkerson notes that Sue Cotter, the third Utah artist portrayed in the book, “experienced poverty, displacement, and feelings of failure, but, like a river, she eddied around the rocky obstructions to pursue a career in art.” Cotter’s first encounter with the Great Basin was less than pleasant, since she cites her family’s move to Las Vegas as akin to hell. Over time, however, she came to appreciate the land and became enthralled with the shapes of the contours as represented in topographic maps. She says, “The patterns of the land were beautiful. They seemed like a mystical calligraphy, a secret language. I began to incorporate topo-maps in my artwork.” She later embraced artists’ books as a way to tell the stories she wanted to tell, and still respect the land. She says, “I look west toward the desert that is so often overlooked, written off, considered a good place to dump toxic waste. The Basin makes you stop, be still, then move slow, explore carefully, sit down in silence, and absorb an indefinable presence.”

Fulkerson’s book is replete with good stories and quotes from various artists. For example, Kathleen Weymouth Durham, a storyteller who makes dolls, was told in high school that she had no talent. She quit making art until after she had her sons, and now says, “Every artist has a guy on her shoulder at one time or another who says you’re not good enough. You have to knock him off.”

Jill Atkins, an artist who makes unusual sculptural purses, had some personal life challenges that led her to embrace her favorite quote from Camus: “In the midst of winter, I found there was within me an invincible summer.” Atkins says, “The trick is to find summer. And we need to make sure our self-talk isn’t destructive. We get enough of that from the outside world.”

Reflecting on Atkins’ story, Fulkerson said, “I have written this book to highlight women like Atkins—women who have walked through adversity to create art that changes our perceptions of the world because they do it their way.” And indeed she has.