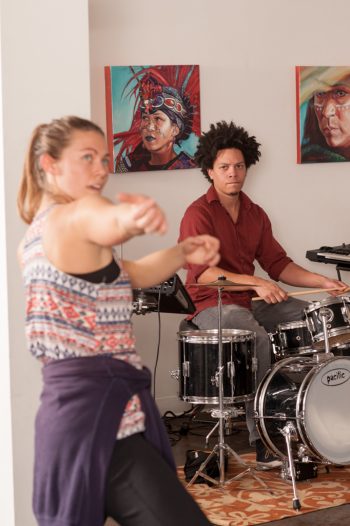 Music and dance have a long history of coexistence; students of dance history learn quickly of the relationship between Martha Graham and Louis Horst, identifying the way in which music is often the lens through which audiences find entry points for movement. And, while ballet companies often have a live orchestra, over the last several decades, choreographers have turned to recorded music for reasons including ease of use and artistic progression. Merce Cunningham playing Sigur Ros and Radiohead on individual audience iPods presented music as revolutionary in its embrace of non-live technologies. Mike Wall, a faculty member at the University of Utah straddles the line, working with choreographers in live performance and through soundFORMovement, an online platform that shares recorded music for dance.

Alongside these evolutions, local musician Wachira Waigwa-Stone has always been working in live performance. First, as a dancer at the Children’s Dance Theatre at the University of Utah, and later as a percussionist accompanying classes at Tanner Dance and Utah Valley University while playing in area bands SLAP, Big Blue Ox, Float the Boat, Sugartown Alley, the Will Baxter Trio and the Nathan Royal Trio.

While quick to say he’s a homebody, it’s clear that being in Utah hasn’t limited Waigwa-Stone’s work. On a long-term basis, he’s played with Porridge for Goldilocks, a multi-disciplinary improvisation group founded by Amy Freitas. In addition, he has created music for Courtney Norris at Sugar Space, Rhythm Migration at the Rose with Rosie Banchero & Fara Tolno, for Sarah Donohue at UVU and Miriam Curtis for the On-Site Mobile Dance Series.

His most recent project with Porridge is a structured improvisation for Dance at Memorial House. Freitas and a group of performers work together to develop a highly structured movement score which Waigwa-Stone follows on his drumkit. Freitas says he is “intuitive and focused when he plays; he can hop onto a dancer’s wavelength very quickly. He offers a direct translation of movement to music, letting the audience hear what they are seeing.”

Waigwa-Stone enjoys that aspect of collaboration with music but adds that, “it’s not always about translation…and that’s another thing I like. Sometimes the dance is saying something in a way that frees me up to not say as much. I find that when people are dancing, it adds another layer to the music, and therefore I don’t have to be as busy.”

He approaches collaborations of this kind differently than playing in a band, explaining that it’s a challenge that “dancers and musicians tend to speak different languages verbally, which means that when a choreographer is trying to explain what she/he wants out of the music, it’s often not with musical terms that I’m used to, so sometimes there is a bit of guesswork trying to figure out what they mean.”

Anyone who has watched him in progress, either playing for class or performance, would note that despite these difficult dialogues, Waigwa-Stone maintains constant sensitivity to the movement, creating music that’s deeply responsive to structure and qualitative shifts. It perhaps stems from his training as a dancer and ability to embody both sides of the issue, but also about the layered form of percussion itself.

With the mark of an enthusiastic creator, Waigwa-Stone posits that any “challenge always ends up being fulfilling in the end, though, because hearing new language used to describe something you already knew from one perspective gives you another layer of understanding.” And this is precisely what makes music and dance such a well-matched pair.

Although always keeping busy, Waigwa-Stone is still dreaming up ideas for future collaborations. He says he’s been wanting to do “a show where the instruments that are being played are also part of the dance. Some might be on wheels, some hanging from ropes, movement ensues, dancers might end up playing instruments here and there…” In addition to projects still in dream-phase, watch for Waigwa-Stone in the near future playing at the Capitol Theatre for the Children’s Dance Theatre show and this summer at the Utah Arts Festival with junk-drumming group SLAP (to name just a few).