Vision and Art: The Biology of Seeing 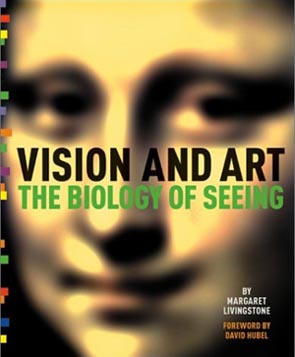 As artists it is often easy to forget how magical the things that we do really are. We are so deeply involved with the phenomenon of seeing that, to us, its complexity can become invisible and be taken for granted.

Human visual perception is the topic of Harvard Neurobiologist Margaret Livingstone’s book Vision and Art: The Biology of Seeing

. It is a science book that looks like an art book. Its format is large and is filled with lots of great reproductions of many of the big names, from Leonardo da Vinci to Chuck Close. (It should probably be mentioned that in the context of this book, all of the art examples that Livingstone uses come from the world of drawing and painting.) And it’s published by Harry N. Abrams – a name familiar to buyers of art books.

The book begins with an introduction to the physics of light. This could be a dry topic but Livingstone spices it up with historic quotes and current practical examples such as how day-glo paints work and how rainbows appear on CDs and in oil slicks. She writes in a way that I find very accessible. You can tell that she loves her topic and isn’t about to shortchange either the subject or the reader by over simplification. An abundance of illustrations (always a plus for those that are more visually oriented) makes for great learning.

From there she beings to look at the physiology of the eye and how it works in tandem with the brain. I thought I had a pretty good understanding of this but I found many surprises. For instance, did you know that we (and other primates) have two distinct vision systems consisting of separate light sensitive cells and brain processing? Rather than loading down the reader with technical jargon, Livingstone refers to these systems as the Where and the What System. The Where System is colorblind and is involved with motion, depth perception, spatial organization, and figure/ground segregation. It is similar to the entire visual system of non-primate mammals. The What System (a primate add-on) is a color system keyed into fine details and is used for recognizing faces and specific objects. Each of these systems has strengths and weaknesses but when combined they give us a rich visual experience.

With this foundation Livingston looks at how the brain processes visual information and how artists utilize that understanding. She uses the example of Claude Monet’s Impression Sunrise as an example of how one image can be processed differently by each of the two systems. In Monet’s painting a red glowing sun appears though a dense morning fog. To the Where System, the sun is invisible. She illustrates this with a black and white reproduction; and sure enough, the sun, which has a luminosity equal to the background, is nowhere to be seen. She argues that the visual disagreement between the Where System and the What System (which recognizes color) is what give the sun in Monet’s painting its vibrating, jumpy intensity. To further her case she shows an altered version of the painting with the sun changed to a more “naturalistic” lighter shade and how it loses its vibrancy.

She goes on to describe the phenomenon of center/surround (I’m not even going to attempt a brief description of this) and how it applies to edge detection and contrast. Both of these topics are crucial to artists in their depiction of both static detail and of motion. She explains how and why using examples by Degas, Renoir, and Ingres.

With examples from Michelangelo, Rembrandt, and Seurat, she shows how the eye (and brain, of course) deals with issues of contrast. An outdoor scene can have a contrast range that varies from black to white by a factor of a thousand. Yet artists can make a visual reproduction of this using paper and pigments with a contrast range of only twenty to one using techniques that are very similar to how the eye actually functions. That is no small miracle.

In short, Livingstone covers a huge amount of information spanning everything from how 3-D perception works to how we encode visual information not just with paint and pigment but for computers and TV. That she can do this in a way that is both relevant and interesting is a tribute to her writing and teaching skills.

Still, to an art audience, it is apparent that Livingstone is a scientist rather than an artist. She spends several pages delving into the mysteries of the Mona Lisa’s smile. This must be a grand mystery to many people and a sign of da Vinci’s genius but to most artists, I think this is a non-issue. Fortunately, she never quite steps into the trap that many scientists fall into when discussing art: looking at it as only a bag of perceptual tricks. The real interest lies in the fact that she can point to so much art (with gorgeous reproductions) as examples for how our vision systems work.

Artists are unlikely to pick up many new, practical tips – it’s not a how-to book. However for me, the greatest thing about Vision and Art: The Biology of Seeing is that it’s a reminder of the sophistication of our visual system and how artists are sensitively keyed into a subject that scientists are only just beginning to understand. And that, really, is nothing short of magic.

Vision and Art: The Biology of Seeing