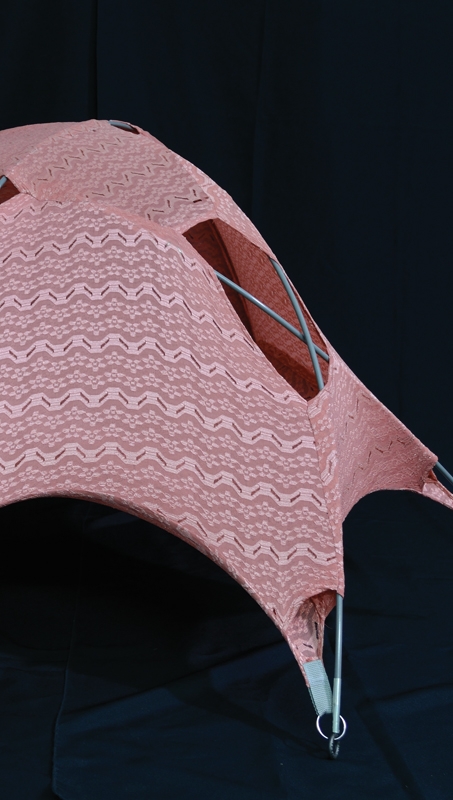 Venessa Gromek is fairly new to the Utah art scene, but is already making quite a splash. She has a piece in CUAC Contemporary’s inaugural show After the End, which opened on December 22nd; and other works are being installed this week in a solo show titled, The Sublime is Light and Easy to Assemble, in the Local’s Only gallery at the Utah Museum of Contemporary Art (UMOCA).

Gromek’s current body of work is a series of sculptures that, constructed out of lace and tent poles, resemble, but don’t function as, tents. While the materials explore a contrast between the masculine and feminine, the pieces reference the outdoors industry and their constant push toward lighter, more portable and aesthetically pleasing designs. “In the outdoor industry it’s more design than art,” she says, “but obviously design is type of art. I’m taking that design and translating it in to a contemporary art form.”

Gromek is heavily influenced by the outdoors. An avid skier, camper, and river rafter, she is trying to capture the sense of the sublime found in the wilderness and bring that to her artwork. “I grew up in the Midwest and I’m not a big fan of it. There isn’t much to do except get yourself into trouble,” she says. “I decided to go West and I just really fell in love with it. I think it helped make me the person I am today, and I want to make that connection between art and the outdoors.”

She first spent time in Colorado before moving to Utah, where she enrolled in the 3D Sculpture Program at Weber State University. Initially, Gromek was working toward a degree in graphic design but found that sculpture suited her better. In April 2012, she earned her BFA with numerous accomplishments under her belt, including participation in several group exhibitions and first place in the 2011 CUAC Utah Ties Juried Exhibition.

After finishing her degree, Gromek formed a studio space in Ogden called O-Town Arts, with co-founders Holly Jarvis, Carey Ann Francis, and Andy Perkins. Since opening they have held one show and they are currently holding a call for entries for a one-night group show. More information can be found through the group’s Facebook page.

Between O-Town arts and having her work on display in two galleries, Gromek is trying to make the transition to making a living as a full-time artist. She currently works in customer service for Amer Sports, but her heart is with her artwork. “I’m trying to involve myself in the arts as much as possible. Right now I feel like I have one foot in one world, and another in a different world,” she says. As she moves forward, she will continue to work on the tent series and explore other projects. “I’m just still experimenting with this series. I feel like I’m just getting a grasp on it, but I do see myself moving to something else.”