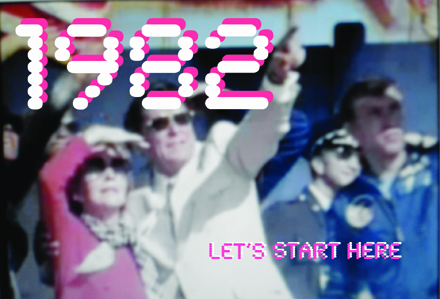 The Visual Art Institute’s new GARFO Gallery opens this weekend with an exhibition entitled 1982: let’s start here. The Gallery has been carved out of empty space in Sugarhouse’s Garfield School by VAI staff Kenny Riches and Cara Despain. The Visual Art Institute has been in the Garfield School since the building stopped operating as an elementary school in 1982, hence the title of the exhibition.

A group show, consisting of nine Salt Lake artists—Trent Call, Jan Andrews, Tessa Lindsey, Brian Patterson, Gentry Blackburn, Davina Pallone, Mary Toscano, Jim Williams, and Allison Baar—the exhibition looks back at the year 1982, through several different lenses; using a cross-section of ages and media. Installation, video, and paintings—both vintage 82’ and new—will reflect the peculiar collision of pop-culture, science, and politics in a year when the computer was named Time Magazine’s Man of the Year, and the artificial heart, the compact disc, and Michael Jackson’s Thriller were released to the public.

The opening reception is Friday, May 29, from 6 to 10 pm and the exhibit will continue through June 20. The gallery is open Tuesday through Saturday, 2 to 7 pm.