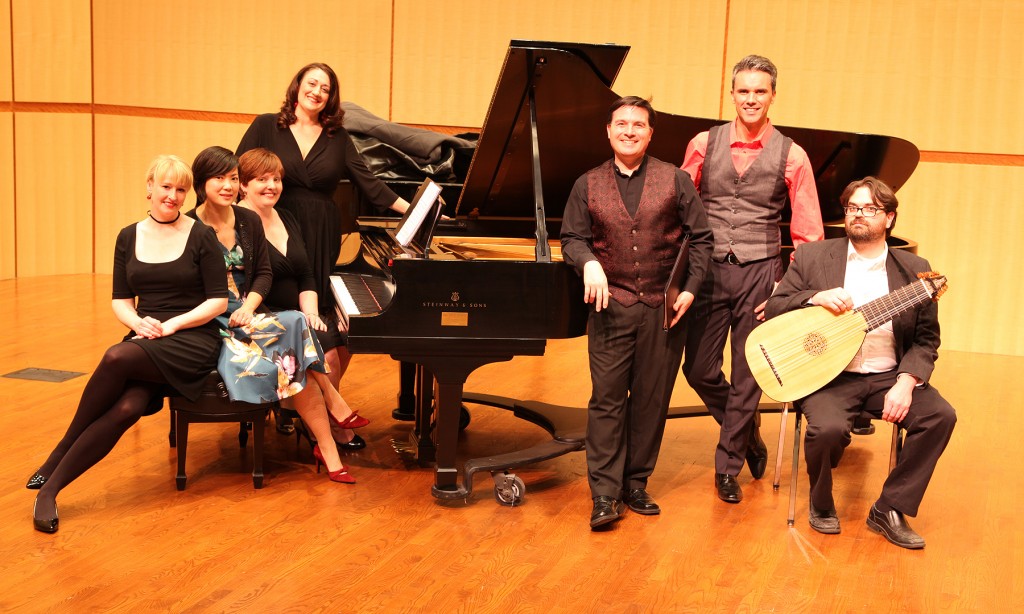 Six years ago Emily Nelson and Chris LeCluyse met for coffee. Nelson had heard about LeCluyse from a common friend and knew of his interest in early music. She emailed him and arranged a meeting to see if he might want to collaborate sometime. By the time they finished their coffee, Utopia Early Music was born.  “We chose the name Utopia to reflect our ideal of a musical world in which anything is possible,” the two founders explain. This year, the Salt Lake City ensemble is presenting its fifth concert series.

Nelson holds degrees in voice, music history, and early music performance. LeCluyse, whose love for early music began in the seventh grade, studied voice and has a Ph.D in English. Each possesses a wide range of professional performance experience and each has a particular interest in early music.  “Chris and I both have a passion for this kind of music, but there just aren’t as many opportunities to sing it since it just isn’t as widely established as Romantic music”, says Nelson.  “I think we started the group simply to have opportunities to sing the music and share something beautiful that wasn’t often heard.”  LeCluyse adds, “The bottom line is that this music really resonates with us—besides responding to Medieval, Renaissance, and Baroque music on an aesthetic and emotional level, we truly enjoy the creative challenge of bringing this music to life.”

The specifics of the term “early music” may or may not be familiar to audiences. It usually refers to music composed before 1750. Concert programs today, whether orchestra, chamber, or choral, usually consist of music composed subsequent to that. Today’s cultural centers offer a wide variety of sounds from the late Baroque, Classical, and Romantic music eras. This more familiar music is sandwiched between the often-neglected early music and “New Music”. Therein lies the well-known “canon” represented by Bach, Mozart, Haydn, Beethoven, Brahms, Tchaikovsky and even Stravinsky, whose Rite of Spring is now over 100 years old – still considered by many contemporary listeners as “modern.”

It is less often, in those same cultural centers, that audiences have the chance to supplement their musical diet with works by early composers such as Mauchaut, Dufay, Dowland, Legrenzzi, Rigatti, Hildegarde von Bingen, and Barbara Stozzi. Utopia has shared music by all of these composers and it’s important to note that many compositions from these early periods were written anonymously. Obscure, but enduring, they have lasted and offer us a rare look into the sensibilities of people who lived up to a thousand years ago. Baritone Michael Chipman points out that “Chris LeCluyse has often remarked in rehearsals that what we are doing when we come together to sing and play as a group of musicians is actually the only way people were able to hear or experience music at all for hundreds of years.”  Chipman has high praise for the two founders of the ensemble. “I have loved performing with Utopia. Chris and Emily have a very clear aesthetic of intimacy, nuance and transparency, and they bring together like-minded musicians to re-create music written hundreds of years ago with that same aesthetic…There is something special about one voice, one part, especially in the rich harmonic world of [the] Renaissance.”

In order to “bring this music to life,” as LeCluyse says, he and Nelson meet prior to each four-program concert series to create and shape their concerts. The music not only spans centuries, but the globe as well. They have performed music from the European continent, Ireland, Nova Scotia and during one concert they focused on music of Colonial America. Nelson says that as they put their heads together they “start with concepts for the shows [sometimes they have holiday themes, or it could be music from a specific part of the world, or a time period, or some combination of those things], and from there, we decide whom we want to hire.” She qualifies that by saying, “Sometimes our process goes the other way around; we wanted to do something with Aubrey and Alex Wood again [violinists], and so we devised our May concert based on what we wanted to hear them play.” LeCluyse puts it this way, “We follow a ’stone soup‘ approach to concert planning: everyone brings an ingredient, and the result is often greater than the sum of its parts.”

LeCluyse (tenor) and Nelson (soprano) perform in every concert. In addition to singers, the earliest music includes instruments such as the Gothic harp, vielle, lute, viola da gamba, recorder, theorbo and Baroque guitar. These and more are all featured in Utopia concerts. They collaborate with other local musicians and sometimes guests from out of state. Utopia focuses on Medieval and Renaissance music, but occasionally they enjoy juxtaposing music from later periods to draw comparisons and contrasts. Just this past season they presented “mash up” concerts in which music of Brahms and P.D.Q. Bach were added to the mix.

Local music critic Ed Reichel calls Utopia concerts “infectious and captivating.” He also points out that they have “found a way to make early music fun.” Perhaps this is because audiences might be treated to one concert focused on “Vlad the Impaler”, the 15th century Romanian prince (on whom Bram Stoker based his Dracula), or another entitled “My Bonny Lass She Smelleth.” There is plenty of fun to be had, but other concerts will offer gentle, poignant, and inspiring music created by people with nothing but a few instruments and their voices to express themselves. LeCluyse recalls special occasions when they’ve truly nailed a moving and expressing number. “The audience will just sit there in silence for a few seconds before clapping. Once I heard a muffled ‘Whoa.’”

Nelson and LeCluyse look forward to the future and are thrilled about their growing and diverse audiences. “Naturally, we attract folks who like to attend classical music events, but it seems like that demographic is branching out a little. Sometimes we draw listeners who are interested in hearing a specific musician or style of music, too,” Nelson explains. Besides presenting the concerts that compose their season, LeCluyse adds, “We also have increasingly offered additional performances, either around one of our main series concerts or during the summer.”  Moreover, at some time he hopes to take Utopia on the road and perform at early music festivals.

Utopia’s founders are proud of their efforts and wish to show lovers of music how “accessible this music is – perhaps even more than the traditional classical repertoire” and to introduce people to “dynamite musicians … who play beautifully on instruments that you just don’t get to hear anywhere else in the city.” They have faithful regular audience members – “hipsters alongside retirees,” but they are always eager to introduce themselves to new listeners. Chipman, having performed with Utopia on many occasions, would be the first to encourage people to attend a concert. “Utopia keeps the brilliant music of the Renaissance and Medieval periods alive and well, and I am grateful for their passion for their music and for letting me be a consistent part of their music-making.”

Audiences have one more opportunity to enjoy a Utopia concert this season. The final performance, “Poignant Pleasures: Music of the French Baroque,” features Alex and Aubrey Woods, violins; John Lenti, theorbo; and Eleanor Christman Cox, Baroque cello. In this program, Utopia and a skilled complement of strings will present music of Marais, Charpentier, Campra and other masters of the je ne sais quois. LeCluyse and Nelson, having given the programming their usual care and research, will focus on French Baroque composers’ “good fight” to resist Italian influence, only to later succumb after Lully, the leader of their charge, dies, having struck his own foot with a conducting staff resulting in gangrene and its subsequent complications.