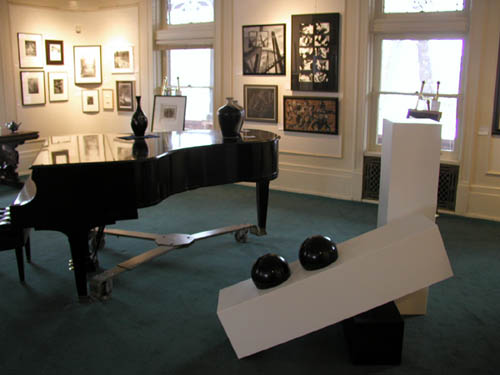 Utah’s inversion has turned everything along the Wasatch front a dull, depressing shade of gray. But don’t let a little haze and fog fool you about the color gray. In the right hands it can do marvels. The Eccles Community Art Center is practically reveling in grays, as well as in their parents — black and white.    As it does every other year, Ogden’s art center invited artists from around the state to enter works “done in black, white and shades of gray” for its juried competition.

This year marks the 8th Black & White exhibit at the art center, and the quality and number of pieces in the exhibit attest to the growing interest by artists of all media in this unique show. The exhibit is not merely a local art show. In fact, Ogden’s artists seem underrepresented this year, giving way to artists from Salt Lake and Sandy as well as smaller towns like Eden and Wellsville.


The format of the exhibit has elicited exciting responses from numerous artists. Robbed of the expressive possibilities of an expansive palette, many artists compensated with an inventive use of materials. There are of course graphic works in pencil, charcoal and ink. But joining these were pieces on scratch board, dye-painted silk, enamel on plexiglass, handmade papers, and ceramics. Some artists entered pieces done in more traditional media such as pastels, and oil and acrylic paintings, but even these works take on a different quality in their monochromatic form. Scott Knauer, the show’s juror, felt that the black & white      “In Remembrance” Larry Goldman format of the competition “placed limitations on the artists but at the same time it encouraged them to do things they might not normally have done.”

This year’s Black & White show fills the first two floors of the art center, with works often hung salon style. Consequently, the viewer has over 150 pieces to absorb. Overall, the quality of the works is good, and the variety is certainly intriguing. Well known artists in the state such as Bill Patterson, Darryl Erdmann, and George Mark England are represented but a number of new names with stimulating work are also introduced. 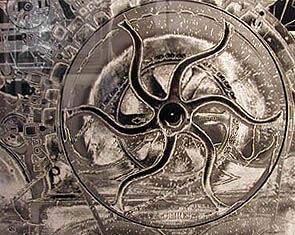 Juror Scott Knauer, who arrived from New York last June to direct the gallery at Weber State University, laid out his selection process as follows: “those pieces that expressed an individual vision, a strong sense of self-expression, originality and creativity, became most evident as I proceeded to review the works. Awards went to those artists that went beyond this concept, and may have ‘risked’ a little more in developing their final work of art.” The result is a wonderfully varied exhibit which demonstrates the powerful visions of artists working throughout the state.

Over 160 artists from as far south as Blanding and Cedar City and as far north as Tremonton and Logan entered 256 pieces for the competition. 150 were selected for the exhibit of which three will receive monetary awards and four honorable mentions. The awards will be made at a reception Friday January 11, 7 to 9 p.m. Eccles Community Art Center, 2580 Jefferson Avenue Ogden, Utah 84401.