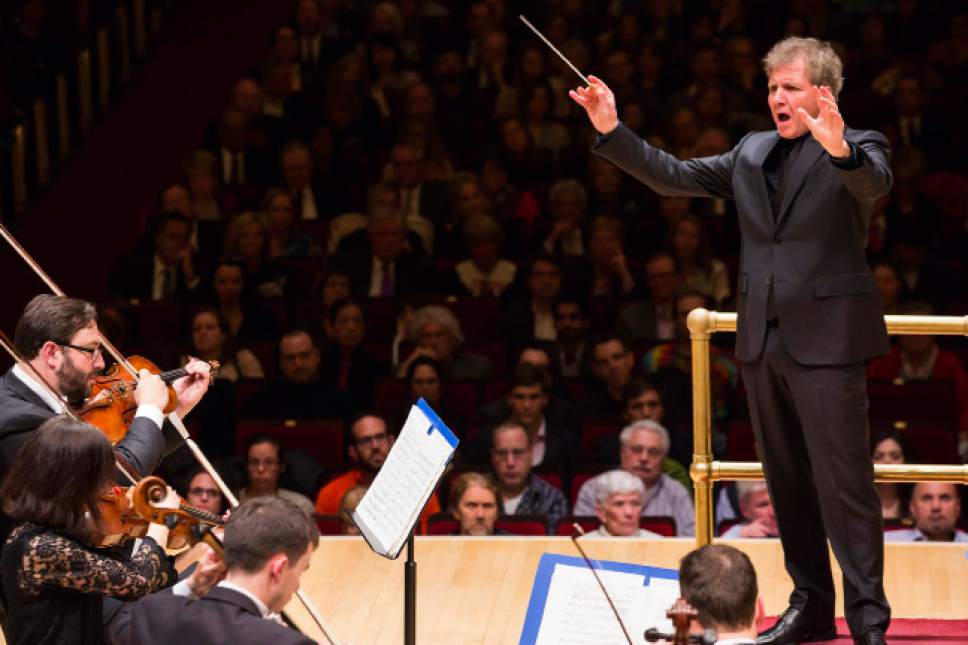 The Utah Symphony’s return, after 50 years, to New York City’s famed Carnegie Hall on April 29 was one of the high points of the performing arts institution’s exceptional 75th anniversary season. They were last there in 1966, under the baton of Maurice Abravanel, to open Carnegie Hall’s own 75th anniversary season, so it was a fitting and well-deserved return by the orchestra, which has developed the will, intensity, and concentration to play with smooth precision, colors in all sections, and character at all dynamic levels. Music director Thierry Fischer has been one of the keys to this success since assuming his position in 2009, but the musicians have had the talent and passion latent within themselves, waiting to be harnessed toward a more unified and consistent pursuit of artistic excellence.

The world’s most storied orchestras perform at Carnegie Hall. However, an absence of half a century is an interesting point of departure for some brief but deeper musings about what this means for the Utah Symphony in the community of North American orchestral music.

National and international touring is a luxury few North American orchestras can routinely afford, and while a welcome challenge and change of pace for the musicians, music director, staff, management, and supporters, it is potentially less enduring in some ways than the legacy of exceptional performances provided in their own halls. The Utah Symphony is no exception to this. Nevertheless, their concert in April certainly has elevated the national profile of the orchestra, as has its most recent commercial recording released earlier this month, the second during this 2015-2016 Season. Featuring compelling performances of works by American composers— Augusta Read Thomas’s Eos, Nico Muhly’s Control: Five Landscapes for Orchestra, and Andrew Norman’s percussion concerto Switch— the album has been reviewed quite positively by some national and local critics of orchestral music.

Their anniversary performance at Carnegie Hall garnered similar praise from The New York Times. The program for this concert was a well-selected and prepared one, with Franz Joseph Haydn’s Symphony No. 96 “The Miracle,” the New York City premiere of the young American composer Andrew Norman’s percussion concerto Switch (a Utah Symphony commission), five selections from Sergei Prokofiev’s ballet Romeo and Juliet, and the Suite from Bela Bartok’s ballet The Miraculous Mandarin. The symphony previously had played all four pieces four times in concert this symphony season, and all within the last six months; and they first performed all four pieces in one program on April 27 at University of Illinois’s Krannert Center. Four performances for all four pieces turned out to be just the right degree of necessary preparation before the performance in New York City.

The concert at Carnegie Hall was an unalloyed triumph, with a deeply probing yet lithe and witty Haydn Symphony No. 96, a raucous, rugged, densely textured, colored and propelled Switch, stunning in its evocations of cityscape verve; an intensely controlled yet exuberantly emotional set of five selections from Romeo and Juliet, and a dexterous yet fundamentally menacing and truly redemptive Suite from “The Miraculous Mandarin.”

Although there are always those in an audience who will never warm to new music, the full house was wonderfully receptive to the commitment and quality of the orchestral playing and conducting on display, including that in Switch, where percussionist Colin Currie reprised the convincingly limber and dynamically modulated performance he gave for the world premiere in Abravanel Hall last November.
After the evening’s final piece, the Bartok, most of the audience gave a standing ovation that lasted for several minutes.

At this point, to continue its trajectory of heightened excellence, the orchestra should continue to record enough compositions each season to produce one commercially-released album per year on the Reference Recordings label, sustain its expanded chamber orchestra series during the summer at St. Mary’s Church in Park City during the Deer Valley Music Festival (the chamber orchestra series just expanded from three to five concerts), and continue to partner with the Red Butte Concert Series just after the conclusion of the summer concert season. And, of course, continue to provide superb performances and interpretations during the regular symphony season under music director Thierry Fischer and the roster of mostly superb guest conductors and soloists. A European tour, especially to Germany, Switzerland, and Austria, should remain under serious consideration, but in my view is far less important than what already has been achieved. The emphasis should be on maintaining and sustaining something like what is already underway.

In many ways, almost every concert on the Utah Symphony’s Masterworks Series during the 2015-2016 Season has been a high point, with superlative playing and interpretations of the highest order. The Utah Symphony and Opera, under its present leadership (with a new CEO set to come onboard in the summer) has many vistas open to it for the foreseeable future. One hopes that with due diligence a new era at least reminiscent of the Maurice Abravanel years (1947-1979), is just over the horizon.