Utah Presents and LAJAMARTIN team up

LAJAMARTIN is a physical theatre company currently based in Salt Lake City, with roots in New York and abroad. On August 6, UtahPresents partnered with Laja Field and Martin Durov, the company’s founders, for a virtual fundraiser. Under the guidelines of our “new normal,” LAJAMARTIN’s new work, Pandemia, was performed on the stage of Kingsbury Hall to an empty house, but live-streamed onto UtahPresents’ Youtube account. Donations received during this virtual fundraiser support the company’s scholarship for BIPOC artists, as well as new film equipment for UtahPresents as they will inevitably be presenting much of their upcoming season virtually.

Film equipment is actually how I want to enter into dialogue with/about Pandemia. Multiple cameras captured the dancers from several angles. One was set up in the house of the theatre, catching what you’d presumably see if you were seated front and center. A second camera seemed to be on the stage, or at least in the wings, capturing the dancers from the side. I don’t know much about camera technology, but the quality of the footage was different from one camera to the next. The front and center camera transmitted a clear and crisp view, while the side camera was a little grainier, sometimes a little less focused, and the coloring was a bit duller. Whether or not this was intentional, it added an interesting and personal layer to the performance. The differing image qualities made me feel as though I was watching a documentary, sometimes seeing what was intended for me and sometimes catching behind-the-scenes footage (in one moment, UtahPresent’s executive director Brooke Horejsi was spotted in the wings).

Pandemia was a series of movement solos featuring monologues, voiceovers, lip-synching and props galore. As the name suggests, it was a reflection on our current state of affairs and was stuffed with imagery and dialogue that highlighted the vocabulary, hashtags, protocols, misinformation, arguments, and feelings that have infiltrated our lives over the past several months … not just because of COVID-19, but also because of the uprising around the country in the face of continued social injustice. A party girl walked into a bar, drank a Corona beer, then downed a hydroxychloroquine pill. A doctor wheeled out an IV, lathered on hand sanitizer, and flipped through medical files. A janitor mused on her role as an essential worker while swiffering the floor. After each performer established their characters, they tumbled into movement essential to the LAJAMARTIN brand — thrashing, whirling, acrobatic.

The company did not shy away from their feelings about Trump … which aren’t positive, by the way. There was no tip-toeing around the discomfort and discouragement that his rhetoric has left many of us feeling, and I was really grateful for such honesty. The solo that really emphasized their commitment to calling out Trump’s bullshit was performed by a man who flailed around a mock-living room after hearing 45’s asinine proclamations while channel surfing. The way he threw his body over the La-Z-Boy chair and around the floor looked how I’ve felt most days this summer: restless, hopeless, helpless. He eventually yelled at the TV, “I wish I could have a one-on-one with you, but you’d probably call the cops on me. Do I really even matter to you?” A pertinent proclamation from this performer, a man of color, who learned this monologue only two hours before the performance.

The original cast member, who I happen to know is not a person of color, suffered a neck injury the day before. Curious how and if the scene shifted with the change in cast, I asked Laja and Martin for the scoop. “The beginning actually was exactly the same … when we had the original cast member, we thought he would maybe be perceived as a Trump supporter, or how someone would stereotype a White man. Our interest was to look at him as a stereotype and then watch him flip it … obviously that changed with the new performer because he couldn’t pull off the same image. But we thought, why don’t we let him run with this, with his totally different energy? The important part is to understand that we wanted to leave a message…”

I can’t imagine that anyone didn’t receive it. 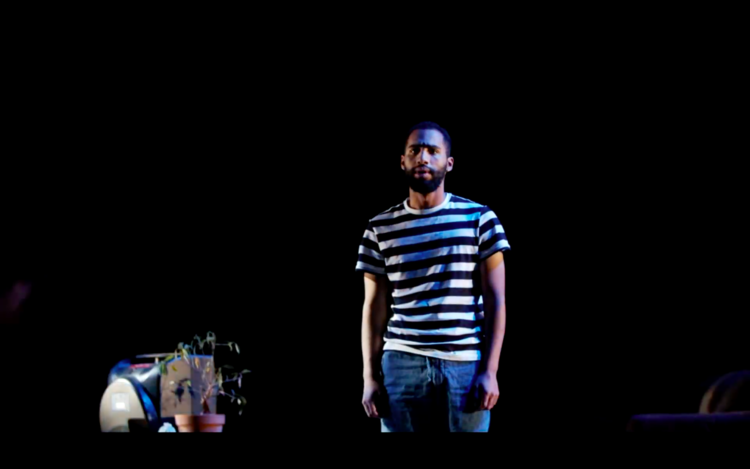 Mase Sangster in a passage that critiques the Trump administration