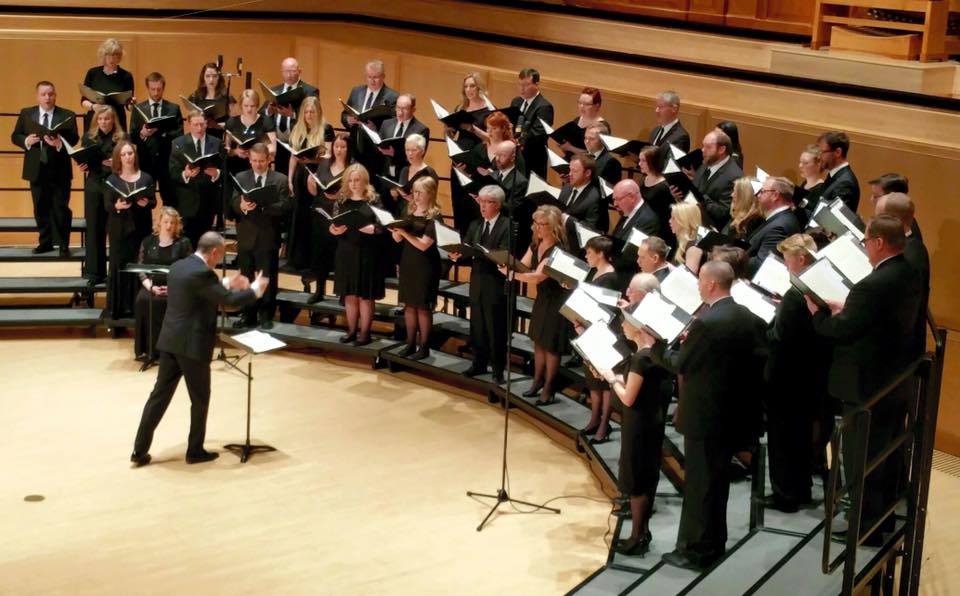 Swiss composer Frank Martin (1890-1974) is one of the most enigmatic composers in that nation’s musical pantheon. The integrity, rigor, and honesty of his music, in multiple genres, are perhaps unmatched, even in comparison to other exceptional 20th-century composers. Martin’s “Mass for Unaccompanied Double Choir” fits this template especially well. It was completed in1926, but only premiered in 1963 because it was, in the composer’s words, an “affair between God and me.”

Utah Chamber Artists (UCA) performed Martin’s “Mass” on Feb. 29 in Libby Gardner Concert Hall at the University of Utah. The title of the evening’s proceedings was “Music of the Masses,” and indeed, this concert should have been heard by even more than the several hundred of those who found their way to it on a winter Monday that was ending with more than a breeze of the advancing seasons to it. Music director Barlow Bradford and the choir are to be vociferously commended for selecting and pursuing Martin’s “Mass” for the centerpiece of one of their concerts. It is a challenging piece, not far from a half hour in length.

The choir presented a performance that met the demands the “Mass” places on the singers and conductor, and the choir excelled with an unabashed honesty, especially in the interior movements. The Kyrie’s textures were lithe and dense. The Gloria was clear in its enunciation and thoroughly invigorating. There was ethereal fervor at “Rex coelestis,” “Domine Deus” had superbly sustained basses, and the choir emoted a gently powerful solidity at “Amen.” The Credo gained in color and texture as it proceeded, with a burst of beauty at “secula,” “genitum” wrapped itself in velvet vibrancy, and then the last few lines danced with their textures. The Sanctus veered off just shy of lushly colored and lively, with a seeping urgency at “gloria tua.” In the Benedictus, the play of high and low lines and then harmonies was pointed with budding wonder. With the Agnus Dei, the lean textures were engaged and conquered. There was a sense of searching for and finding a formal yet exquisitely engaged precision, and this contributed decisively to the meaning of the text. “Agnus Dei, qui tollis peccate mundi” was earnest and gently so, and “passem,” the last word, was superbly surrendered into its colors. The Sanctus and Benedictus were indeed a locus around which the other movements rotated.

This was a meticulously committed performance, one that confronted and embraced the composer’s deep faith in no uncertain terms, yet at times enabled and even embroidered the text with a loving ardor the composer surely believed possible and even desired. In a performance and interpretation that was both ethereal and rugged, often simultaneously, the choir sought unity in this division and frequently achieved it with some poignancy that resounded in unrepentant fashion.

The second half of the program presented a unique perspective on the Mass as a choral genre, with well-chosen excerpts from four popular Masses that the choir has presented previously in its 25 years. The excerpts were arranged in a progression which, more or less, created its own hybrid Mass.

Maurice Duruflé’s (1902-86) Requiem is his most performed composition, and its comfortingly rich lyricism is exceedingly accessible. The choir performed the first two sections, “Introit” and “Kyrie.” The “Introit” was sumptuous and refined, notably in the sopranos and altos, and the “Kyrie” saw suave textures enhance the lyricism. Organist Gabriele Terrone established and maintained attentive balances with the choir and small orchestra, along with the UCA’s music director, Barlow Bradford, as conductor.

“Dies Irae” and “Lacrymosa,” the third and sixth movements from Mozart’s “Requiem Mass” followed the Duruflé’s excerpts. “Requiem Mass” was Mozart’s final work, and is notably more continually infused with pulsating dynamic extremes than the other Masses on the program.  In the “Dies Irae,” vehement highlighting of colors and fiercely refined tempos unerringly matched the passion of the score. The “Lacrymosa” exhibited elegant phrasing, pulsing with life, joined with a more deliberate Larghetto tempo and even more lucid textures.

With its heavy tinge of lullaby-like consolation, Gabrile Fauré’s (1845-1924) “Requiem” is also his most popular work. The “Sanctus” and “Agnus Dei” in the version for choir, orchestra, and organ, were presented.  The “Sanctus” featured colors vibrant with cherished desire, piquant organ, fine-grained strings, and then shifted into an “Agnus Dei” that was firmly phrased.

Soprano Melinda Kirigin-Voss was the forthright soloist in the excerpted “Lux aeterna” from John Rutter’s “Requiem.”  This is the seventh and final movement of that composition, the most elaborately direct of the five Masses performed. With its almost unrelenting mixture of colors and textures, this movement found the choir emerging into an even more heartfelt ardor. The lullaby-like freedom in phrasing at the end dovetailed with glinting timbres in the violins, and the orchestra, composed of many members of the Utah Symphony and other superb local musicians, played with vigor and ineluctable passion.

This “Lux aeterna,” along with Duruflé’s “Introit” and “Kyrie,” enchanted most in the second half. They suited the choir’s tonal blend with almost intuitive abundance. The interpretation of the Mozart was elegantly dynamic, and emphasized the limber lyricism with precision. The performance of the Fauré “Sanctus” and “Agnus Dei” embraced their warm-hearted gentleness and never let them unfurl into any blunt edges. In both parts of the concert, Barlow Bradford conducted with his customary smoothly invigorating, direct, and gracefully-deliberate style, and the choir sung with tempered elation, the details an omnipresent part of the whole.

Yet the performance and interpretation of Frank Martin’s “Mass” lingered in the memory. Utah Chamber Artists delved into it with more than mere hints of elan. It is far more of an interior world than those found in the Duruflé, Mozart, Fauré, and Rutter Masses. It is never an impenetrable and shattering fortress, and in the end the choir was undeniably triumphant both in and through it. In this tumbling unfurling of Masses, Martin’s floated just above, tethered as it is to a profound humility towards life’s vicissitudes. Its sheer directness of utterance is difficult to deflect, and can be irresistibly embraced. Its spiritual grace derives from its arc of forthright and intimate majesty in belief. Powerfully poignant, yet never truly sentimental, it enlivens the soul with fixed and tender traceries of love.