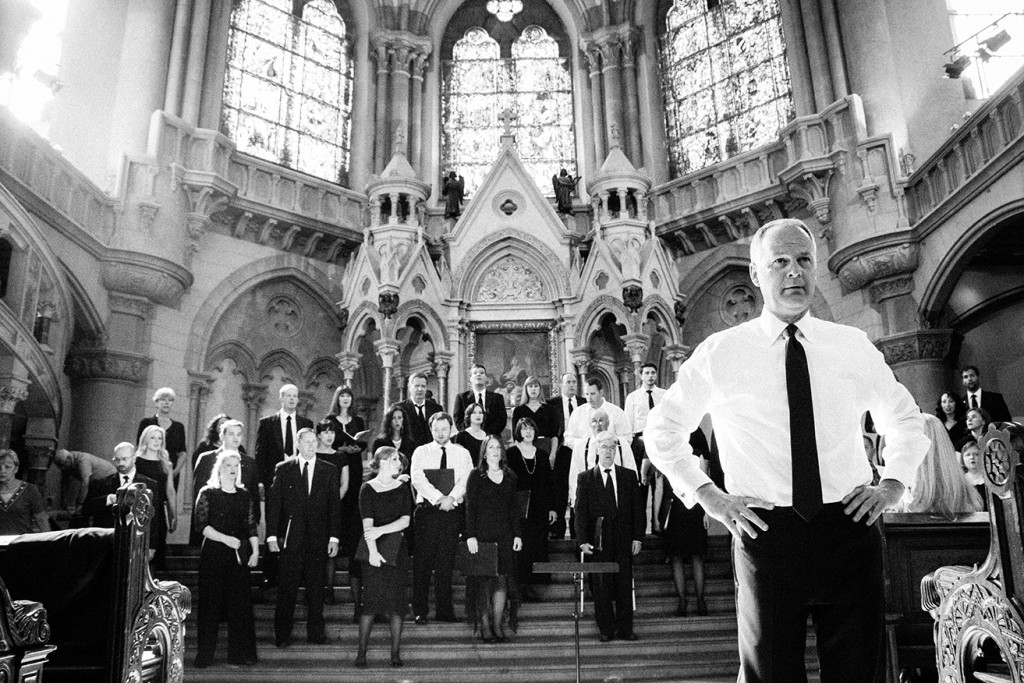 Barlow Bradford’s Utah Chamber Artists wait to perform in Mondsee Abbey while on tour in Austria this past June. Photo by Dallas Graham.

Their “Collage Concert” has become an annual event not only for the 45 voice choir and their instrumentalists, but for Salt Lake City as well. Over a thousand people make their annual pilgrimage to the cathedral to hear the choir in this unique event as it has become one of the most anticipated cultural events along the Wasatch Front. Salt Lake City resident Steve Soelberg says, “I love the Cathedral college concert. The Cathedral of the Madeline itself is amazing but to hear Utah Chamber Artists sing and play in such a grand building makes for an incredible experience. I try never to miss this concert and will often attend both nights.”

This year’s concert is entitled “Crossings.” The music will explore the idea of both literal and figurative crossings that we encounter. The unique thing about this year’s program is the second half. “Typically our collage concert is made up of many, smaller pieces that almost overlap as the choir and the instrumentalists move around the cathedral from piece to piece,” says Executive Director Becky Durham, “but this year, the second half is dedicated to one compositional work by Latvian composer Ēriks Ešenvalds. His mass is a beautiful work that tells a story and thanks to the lighting design by Christopher Dance, the artwork and architectural elements of the cathedral will assist the musicians in telling a story.”

“The ‘Passion and Resurrection’ is an oratorio for mixed choir (SSAATTBB), quartet (SATB), soloists, and string orchestra, and is composed in four large sections, combining texts from the Gospels and Isaiah, sung in Latin and in English. Each section is introduced by a quotation setting the scene for that part. Part I features the story of the woman who bathed Jesus’ feet with her tears, ending with the pronouncement, ‘Thy sins are forgiven thee, thy faith has saved thee, go in peace!’ — a metaphor for the sins of all mankind. Part II begins the episode in the Garden of Gethsemane where Judas betrays the Lord with a kiss. This leads to a powerful representation of the crucifixion, and a lovely reflection upon the Savior’s great love for mankind. Part III recalls the prophecy of Isaiah, ‘Surely, he hath borne our griefs . . . .’ and is followed by a series of words expressing the sufferings of Jesus upon the cross. Part IV concerns the events of the Resurrection. Our feelings are embodied in the women at the tomb, particularly when Jesus reveals himself to Mary.”

The first half of the program will consist of several, shorter works sung by the choir, interspersed with pieces performed by guest violinist Hasse Borup, Cathedral of the Madeleine organist Gabriele Terrone and pianist Jared Pierce. Also on the program is a mesmerizing Ave Maria by Giuseppe Verdi and a piece by Ola Gjeilo entitled “The Spheres” from his Sunrise Mass, an a cappella version of the opening Kyrie of that work. As Gjeilo explains, the use of an English title for the traditional Kyrie “has to do with the initial idea behind the Sunrise Mass”:

“I wanted the musical evolution of the Mass to go from the most transparent and spacey, to something completely earthy and grounded, from heaven to earth, so to speak. So in The Spheres, I used a kind of overlapping fade-in/fade-out effect, to give a sense of floating in space, in darkness and relative silence, surrounded by stars and planets light-years away. However, I don’t follow this idea throughout the entire movement, since it eventually gathers into a big crescendo and ends with a clear, chorale version of the theme presented very slowly and muddled in the first part. So, in a way this movement is also a microcosm of the entire Mass, which also ends with a longer chorale, in The Ground (Sanctus & Agnus Dei).” Because of the nature of the piece, the choir becomes, in a sense, two choirs and will sing it as two choirs, separating themselves on opposite ends of the cathedral.

Because of the popularity of these concerts, Utah Chamber Artists will perform two consecutive nights: Monday, September 22 and Tuesday, September 23. As always, the Cathedral Collage is free to the public and no tickets are required. For more information, please visit their website: utahchamberartists.org