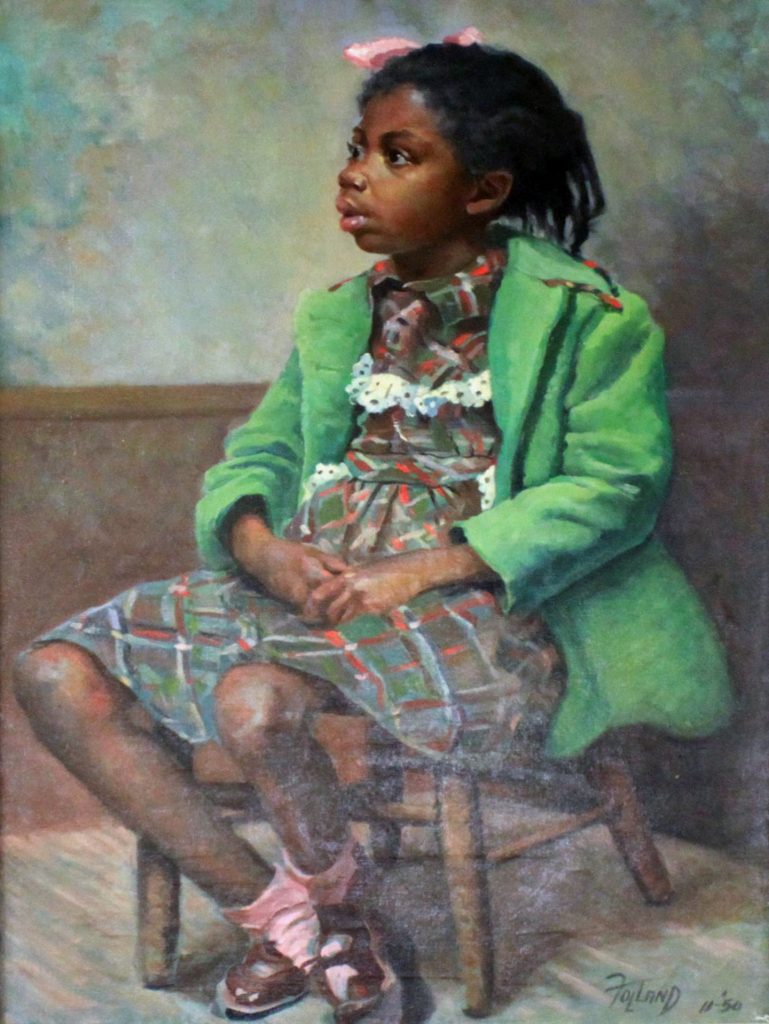 This portrait, from the collection of the Canyons School District, dated Nov. 1950, is representative of the portrait work Lorin G. Folland was making at the time of his Sept. 1950 exhibition at Wallen House of Design.

Mrs. Wallen could not understand why more Americans did not own fine art. “In Sweden,” she said, “a family of modest means will save for years to purchase a good painting or an exquisite piece of furniture.” (Salt Lake Telegram, 15 May, 1950, p. 16)

Vera (if we’re being 21st-century informal) might have had a slight bias, however. Her husband, Eric, was launching a design business, dedicated to furniture and fine art. Their home at 444 E. South Temple in Salt Lake City served as an initial showroom: the art came from their own collection of Swedish artists, while the furniture was a mix of contemporary Swedish furniture (like the blond coffee table the Telegram remarked on that would transform into a dinette to seat eight people) blended with antiques.

In the summer of 1950, the couple, who had immigrated from Stockholm, found a commercial spot at 180 E. South Temple, and opened Wallen House of Design. The space featured their furniture collection and artwork by local painters. The young artists in town had no gallery of their own and were showing where they could: earlier that year, the lobby of Cinema Arts, in downtown Salt Lake City, became one venue, while a redesign of the lobby at the Newhouse Hotel, in Exchange Place, was celebrated with the work of young artists like Arnold Mesches and V. Douglas Snow. Wallen embraced this generation — his own — at his new commercial venture. His curatorial choices for art remained as eclectic as the mix of furniture he displayed: he mingled the modern with the traditional, the representational and naturalistic with the surreal and nonobjective.

For the initial group show, Wallen hung five young artists working in modern veins: Anthony H. Ivins, a BYU graduate studying at the University of Utah, had recently spent more than a year in Europe, where he met his Norwegian wife, was influenced by French moderns like Matisse, Dufy, and — a member of a younger generation — Lucien Fontanarosa, and encountered the modern revival in ceramics (which would become his primary medium); Frank Bacher, a nonobjective artist who had spent several years in New York City, was then experimenting with a lyrical, calligraphic style that owed a great deal to the recently deceased Arshile Gorky. Dick Sears, an Eastern artist who had studied in California, was teaching at Salt Lake City’s Art Barn and creating representational and abstract works in a loose, expressionist style; Barbara Swensen Gogins worked with the figure and was compared in a future exhibit at Wallen’s to Edvard Munch; her inventor/painter husband Laird Gogins, of Minnesota, created extremely stylized circus figures.

Following the initial group show, Wallen staged solo exhibitions for several of the city’s emerging artists. Before the war, Lorin G. Folland had studied with A.B. Wright, LeConte Stewart and Lee Greene Richards, though he chose to finish his bachelor degree in social sciences. After a stint in the Philippines during the war, he had returned to the U and was pursuing a masters degree under Alvin Gittins while also teaching classes. His September 1950 exhibit at Wallen’s featured watercolors, landscapes and portraits. Several of the latter were of young Black models, part of a trend at mid-century (and the subject of a future article).

Folland was followed by one of his students and another G.I., Francis Zimbeaux.  After a couple of years of study at the Art Barn, Zimbeaux was continuing with classes at the University of Utah. James Fitzpatrick, of the Salt Lake Tribune, compared his work to the pre-Raphaelites, for its sense of nostalgia, and the French Impressionists for the artist’s interest in the quality of light. “Mr. Zimbeaux is a combination of both of these concerns. He paints with an impressionist’s strokes, and with disregard of details, and he also seeks to evoke a mood (a melancholy one, usually) in the viewer … He is less concerned with the beings in his pictures than in the quiet, dreamlike surroundings.” Zimbeaux’s exhibit featured several landscapes based on his wartime experience in the Azores. Fitzpatrick said the exhibit “gives [the Salt Lake City public] a chance to see art which has not had much of a following in the west.” (Salt Lake Tribune, 05 Nov. 1950, p.71) 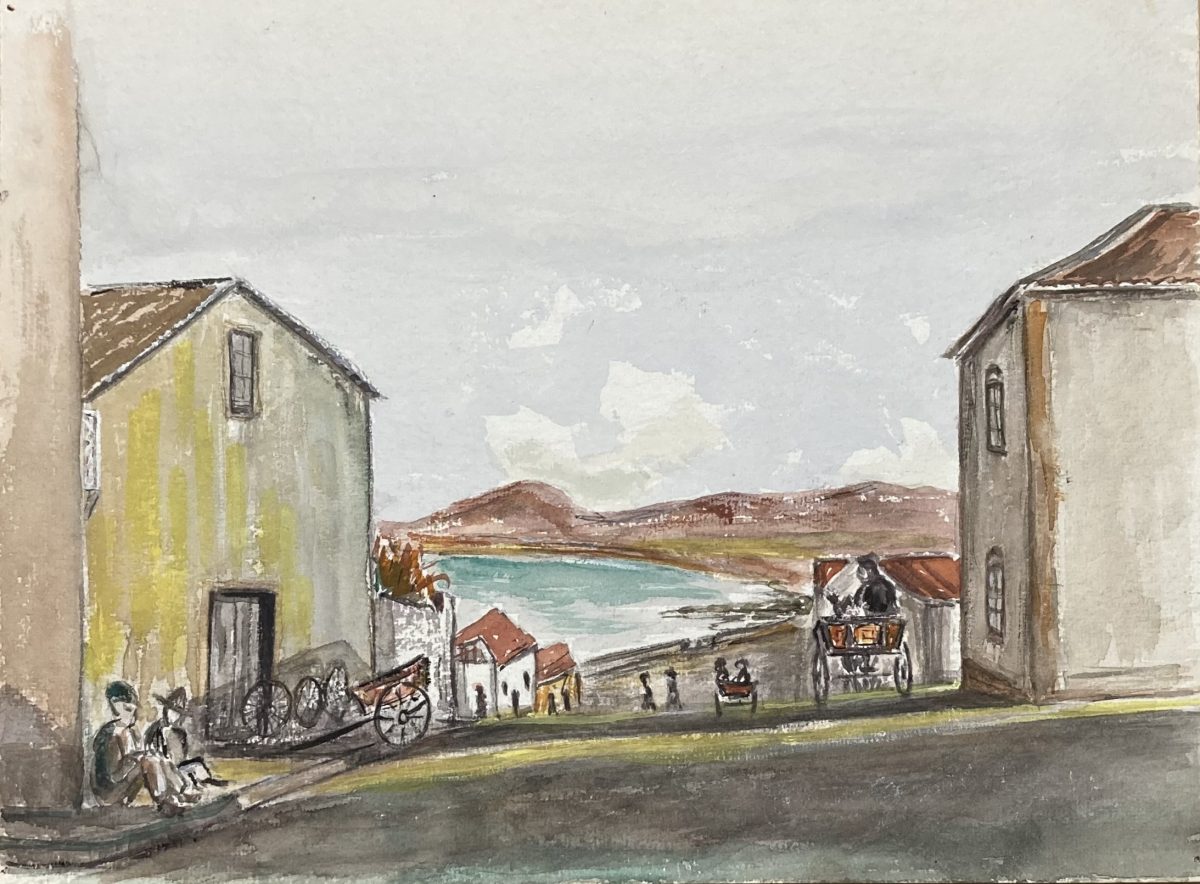 This watercolor, from the collection of Artists of Utah, was painted in the mid 1940s while Francis Zimbeaux was stationed in the Azores. 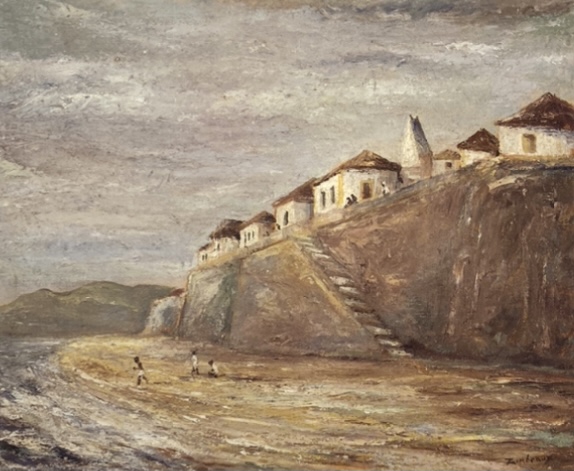 With an increased focus on texture and the effects of light, Zimbeaux transformed his wartime experience into dreamlike works full of melancholy.

Mary and Lee Dusell were a pair of Midwest artists who had studied at Cranbrook Academy in Michigan and came to Utah in 1950 to teach at the Art Barn. As well as being a painter, Mary was a textile artist and jewelry maker and for the Wallen exhibit created fabric designs suitable for hanging or upholstery. Lee’s expertise was printmaking, and his works at Wallen’s included oil paintings, simple line drawings and a dramatic lithograph depicting striking Mexican peasants. “The exhibition is particularly interesting,” James Fitzpatrick wrote, “because it shows what can be done with modern works of art in an atmosphere of daily life.”  (Salt Lake Tribune, 11 Mar. 1951, p. 62)

In late 1951, a posthumous exhibit for Jean W. Jenkins, a Wisconsin artist who had spent several years in Salt Lake City, was followed by one by Harry Jonsson, a Swedish naif who spent only a short time in Utah. The Wallens didn’t stick around for long, either. Within two years the Wallen House of Design and its owners disappeared from the Utah scene. They had established an important precedent, however, and future Salt Lake City venues would incorporate home furnishings and design with works fresh from artists’ easels. 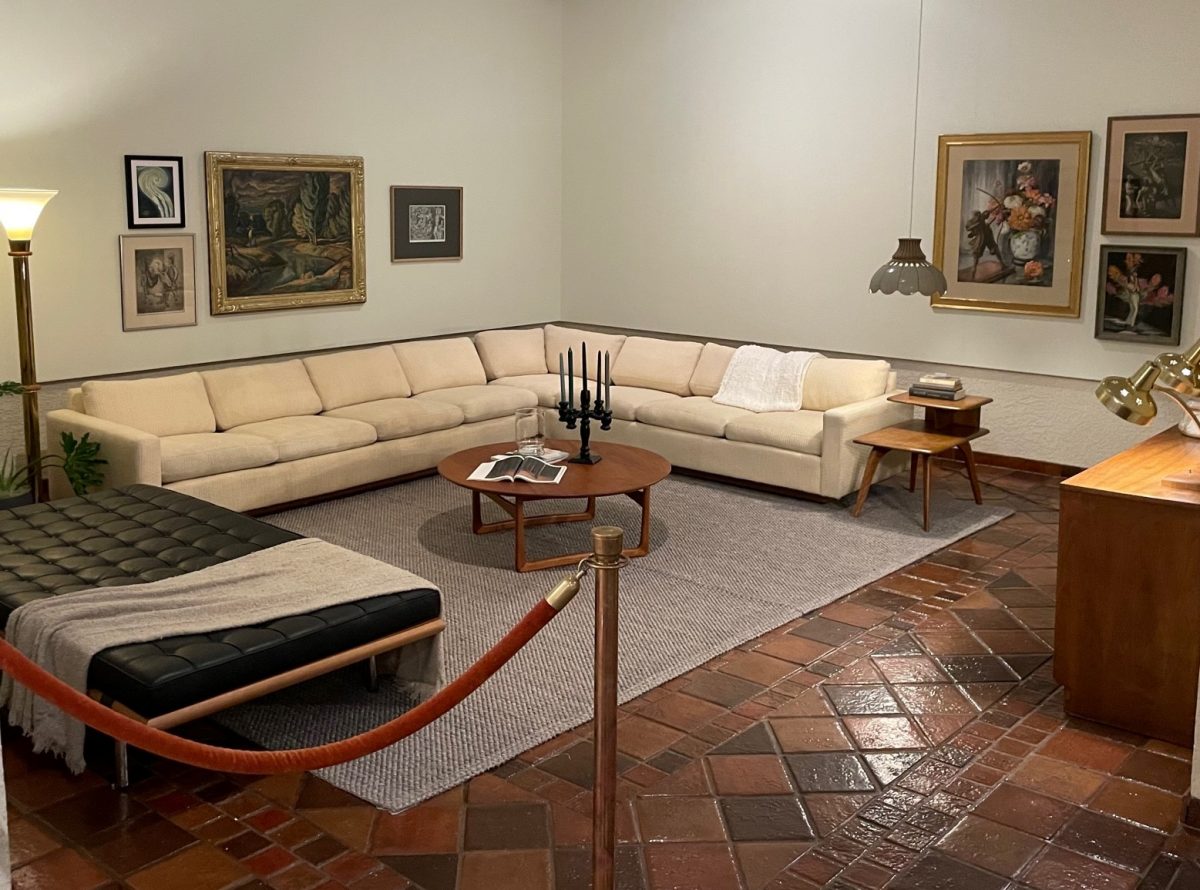 This article is part of Before Now, Artists of Utah’s program to explore the history of Utah’s art world, and written in conjunction with the Springville Museum of Art’s Mixed Reviews: Utah Art at Mid-Century (on view Aug. 24, 2022 – May 13, 2023). At the exhibit, cityhomeCOLLECTIVE founder and designer Cody Derrick and residential realtor and art curator Kelly Carper curated two rooms with furnishings from the era and pieces from the museum’s collection. Read an interview about the project here.

If you would like to support our Before Now program, please make a contribution to Artists of Utah.