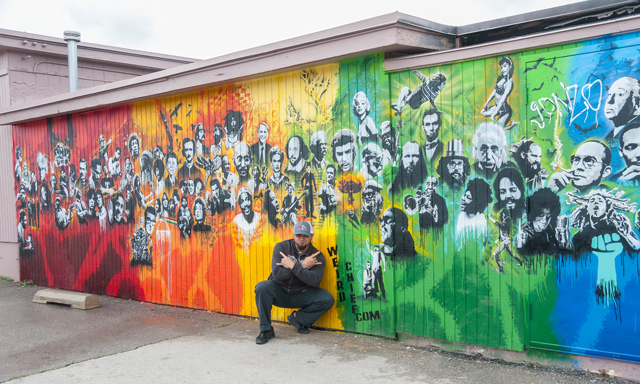 Wierd Chief outside his wall at the SLC Arts Hub

Though graffiti artists are almost always outdoors when they work, we usually don’t think of paint cans when we think plein air.  Which may explain why when we mentioned a list of plein air events in last week’s blog post we failed to mention the Urban Arts Festival, which takes over the SLC Arts Hub this Saturday, June 9.

Rather than representing their local landscape with paint, street artists hope to transform it. They’ll be demonstrating how they do it during the second annual festival that celebrates a variety of art forms springing out of the city. Over 100 artists will be displaying everything from paintings, photography, and prints to jewelry, clothing, and sculpture. During the nine-hour event you’ll be able to catch 30 different musical acts as well as dance performances and skateboard demonstrations.

Last year’s event was on Pierpont. This year they’ve moved over to the 33,000 square foot SLC Arts Hub, the new headquarters of the Utah Arts Alliance. In addition to its 24 artist studios, the space will house arts non-profits, 4 dance studios, an events center, and the Gray Wall Gallery. Cat and Blake Palmer, featured in this month’s edition, were one of the building’s first tenants. Get a peek at their studio on page 7 of the June 2012 edition (learn more about the space here). Cat Palmer and Utah Arts Alliance director Derek Dyer stopped in at the KCPW studios last week to talk about the event. Listen to the interview here.

And be sure to check it out this Saturday, June 9, from 11 am to 8 pm, for the second annual Urban Arts Festival.