Under the Radar: Six Promising Artists

Layered in the strata of Salt Lake artists, below the hot local art stars and somewhere in between the old favorites, students, and nationally showing Utah artists are those who work just under the radar– up and coming people producing work that is deserving of attention, and who are just breaking into the Salt Lake art scene. In this particular case, they are six prolific women with very different approaches to technique, execution, femininity, and art production in general. But they share a common thread in their commitment to their work and its role both in their lives and in the peculiar art market that Salt Lake can be. They employ grit, print, paint, carnival, frescoes, and sterling silver nipples to bring viewers something fresh, exciting, and yet to be discussed. They are (respectively) Brenda Wattleworth, Claire Taylor, Wynter Jones, (this month) and Gentry Blackburn, Tessa Lindsey, and Laura Besterfeldt (in the June edition).

Brenda Wattleworth
Perched in her narrow, second floor studio in the infamous Guthrie Bicycle building, Brenda Wattleworth is busy re-imagining history. Amid her collection of odd and hilarious reference books, she creates her paintings—at present, multi-figure narratives on 2’x 2’ panels. The work, however, is not what you’d expect from a vague and perhaps tired description such as ‘figurative’. It is much more exciting and simplified. It is the result of years worth of metabolizing, aborting, re-directing and re-examining her experiences and artistic ideas to arrive at an intriguing and prolific point in her career as an artist. It is not only the presence of figures in the pieces that creates the narratives, but as Brenda describes, the “self-referential surfaces.” They are rubbed with grime, coated with wax and paint, and abraded with steel wool. Using a high, washed out palette, and a worn, milky atmosphere, the surfaces appear and disappear, emerge and dissolve around the figures, luring the viewing into a sort of whimsical and nightmarish space. A completed painting is what her process yields: a reduced, condensed, basic, but very potent version of the initial components. Her characters are often animalistic, partially due to being part of a generation she feels is drawn to animism and the totemic. 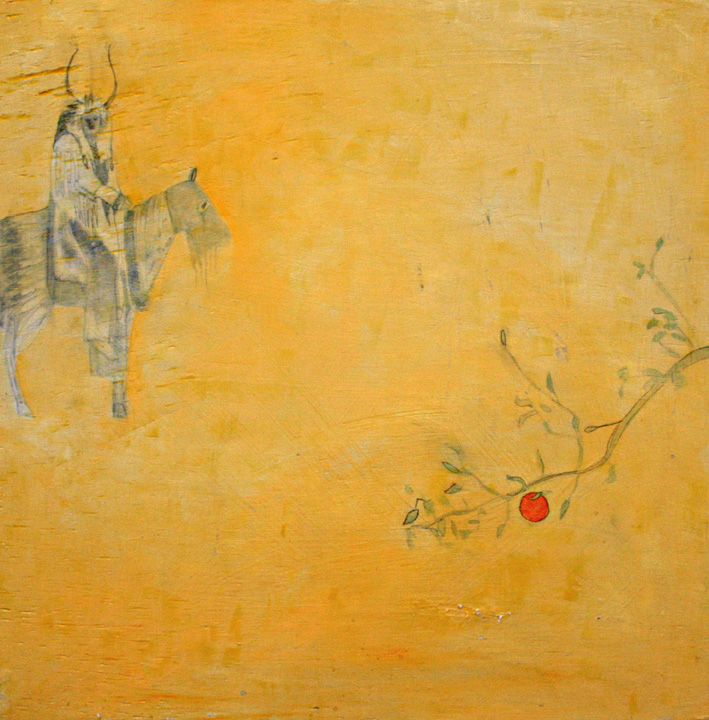 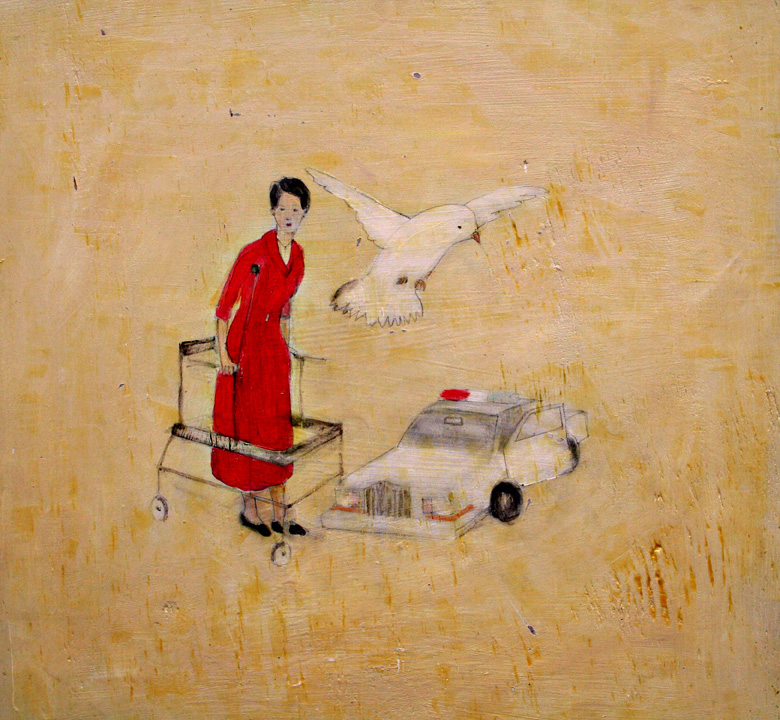 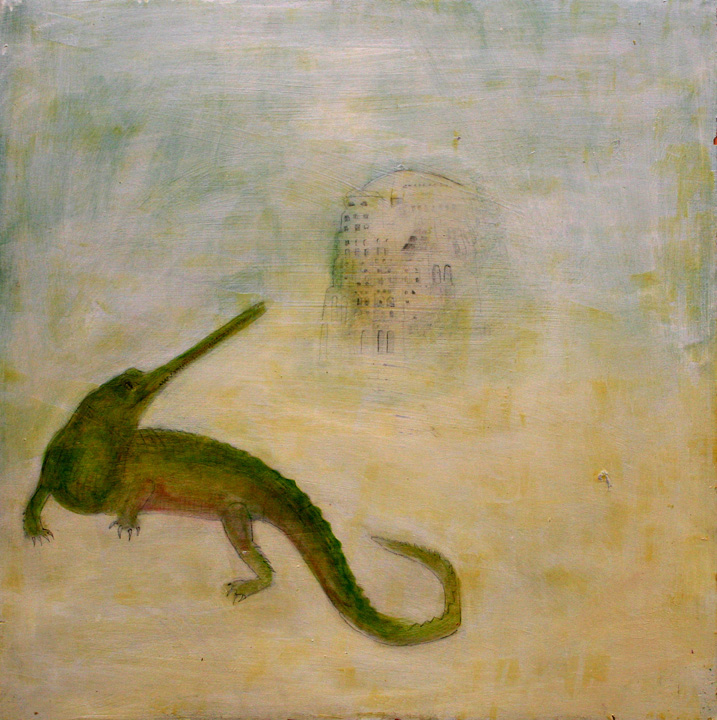 These narratives reference myth and the peculiar phenomenon of storytelling via Brenda as a medium. She borrows, melds, and re-configures stories both from her own rich personal history, and that of society to create a mood. Much of her source material comes from DI, a place she enjoys spending a day off to rummage through obscure artifacts, mostly books, from decades and eras past. It familiarizes her with culture, she says, and places cultural relevancy in a strange yet very revealing way. The resulting images are a kind of mix-tape of generations of myth, lost histories, and the lack of history…yet they are executed with fairly simple treatment of the figures and compositions—which in many ways can be more challenging. They appear used and exposed, like the tales they reference, and do not attempt to deceive or elude the viewer— she depicts images of terror and wilderness that are playful, uneasy, and hint at unruly, uncouth human behavior– and she willingly admits they are her own interpretation of events past.

:: Upcoming shows: Nobrow with Jenevieve Hubbard in May, Artisan Frameworks in June, open studio at Guthrie in June.

Claire Taylor
Moxy Mosos Day is a holiday that occurs four times a year; a jumping holiday. Captain F and Stunt Double are two political penguins who live in Mathmatica, and speak in trigonometric equations. And Solomon, a very special whippit, is the star of the show around which everything has been fabricated. This is all according to Claire Taylor, a printmaker who uses ink and pressure to create a realm of animals with quirky humanlike behaviors. Formerly a painting major, Claire switched to printmaking because it seemed more conducive to the absurdity her characters and stories require. But there is more to her work than the simple, clean-lined animals and the lighthearted nature of their experiences. Although usually based on animals she knows, many of the characters vaguely imply people—two foxes represent her and her boyfriend, and Solomon, her late dog and the object of adoration in her work, is loosely a self reference; after all, she says, “we are all narcissists.” And animals, are likely less narcissistic than humans. The purity that they exist in compared to that of people is why they are Claire’s chosen metaphor. They are human complexity manifested in the simplicity of pure animal—thus eliminating human desires, vices, and turbulence and making them more idealized. These pure, simplified, and clean traits are conveyed in the way the prints look—rudimentary, minimal backgrounds allow the characters to seem more real and detailed, even though they too employ fairly direct line work. Because she works primarily in letterpress, and often relief cut from cintra or lino, the edges are clean and distinct, and achieve a certain standard of quality for the work that instills legitimacy into the tales of the creatures. This sophistication enables them to just escape being illustrative, yet they are still fantastical enough to be somewhat childlike. Despite the involvement of text in the prints, they form only a loose narrative. The words are mere snippets of the story, the rest is implied. The aspect of multiples and propagation that is intrinsic in printmaking allows for the prints to serve as almost political banners for the characters, to promote them and disseminate their story—just to hint at what transpires in Mathmatica. 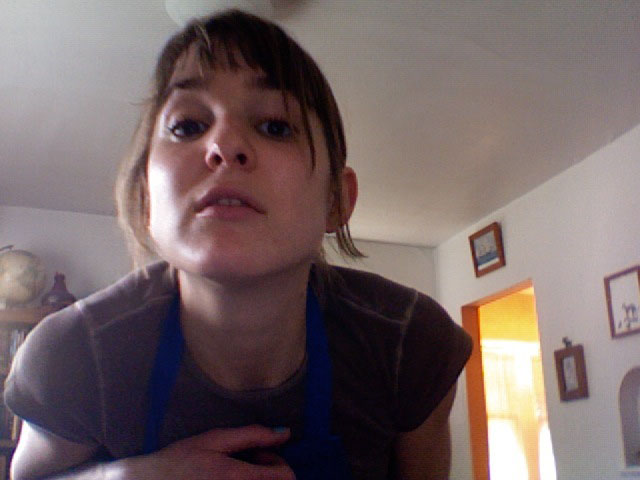 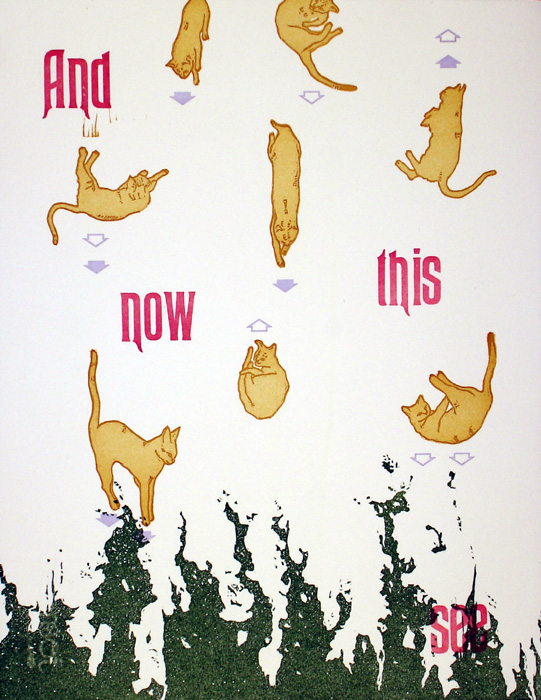 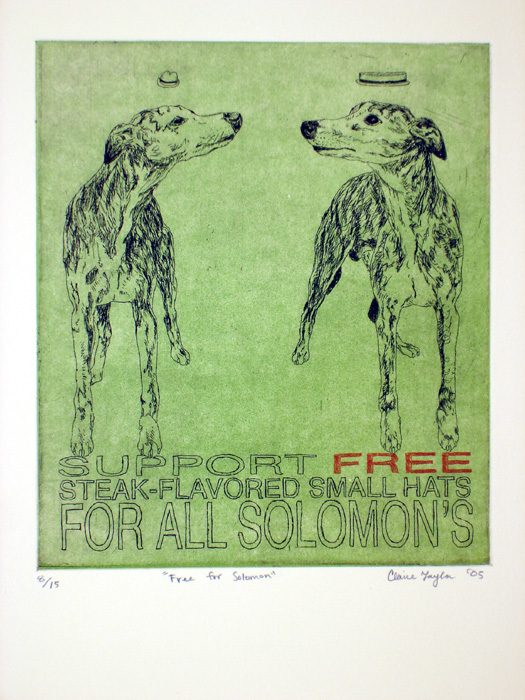 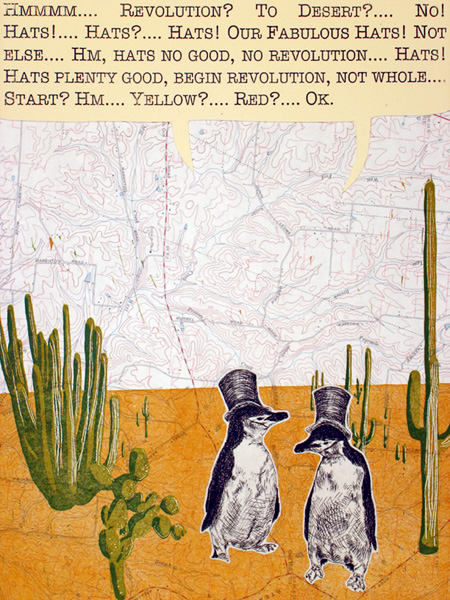 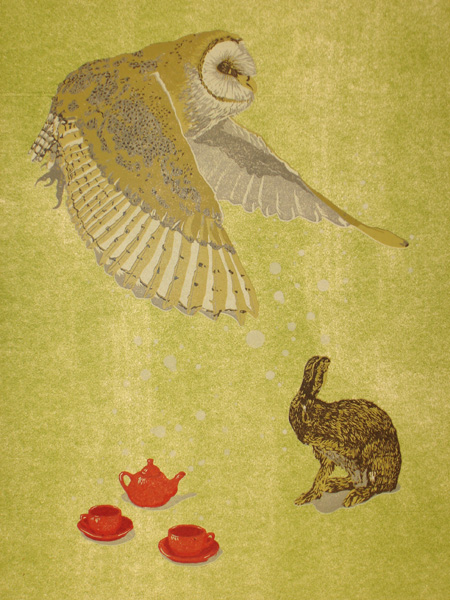 :: Current shows: Student Show at Alvin Gittins Gallery in U of U Fine Art Building,. University of Utah BFA show at Contemporary Design and Art Gallery at 127 South Main St. in May.

Wynter Jones
“I find my living experiences to be either similar or foreign to any other person, but never the same.” This speaks not only about Wynter Jones herself but also her paintings. And her paintings, in turn, are intended to relay their own explanations so she doesn’t have to. This is evident in the intrinsic nervousness and overt articulation that battle each other in the work. The paintings display a grotesque handling of the female figure, but evade the overwhelming imagery that is often exemplified in work dealing with this subject matter. The figures waiver between discreet forms hidden among exquisite contrasts and webbings of line, and more obvious and aggressively painted representations. The work is derivative of insecurities and inadequacies, and serves as a visual reaction to feelings of torment and frustration that Wynter feels is often expressed in a silent, docile, and neutral way by women. They are echoes of her experiences, those she has observed, and largely, of the strange standards and expectations implanted into the minds of women in this particular locale. But it’s not this dialogue that she wishes to actually have—she aims to have the work stand on its own, and incite a response. The approach is successful; the beautiful dismemberment and distortion, and the elegant play with proportion makes the initially grotesque mutilation somehow lovely and intriguing. The underlying statements become visible beneath the impressive technical execution of the paintings. This attests to her motivation as an artist—it is imperative that she paints, she says, regardless of the reaction. 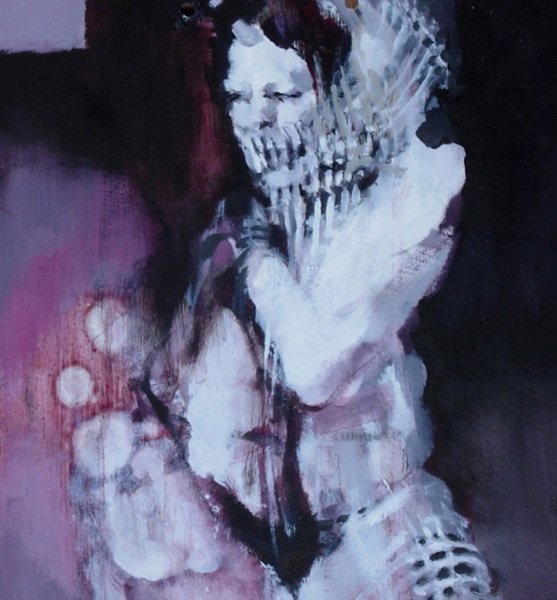 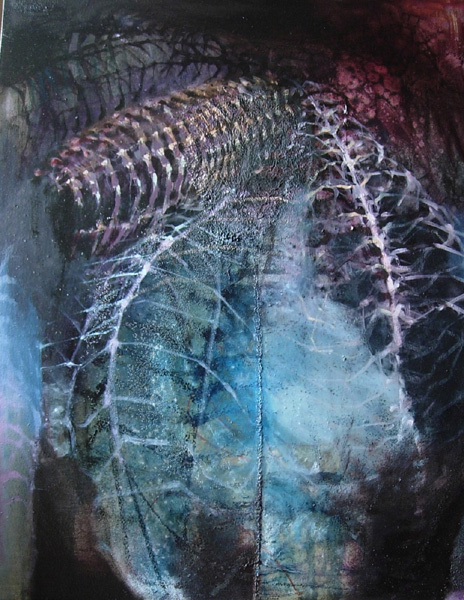 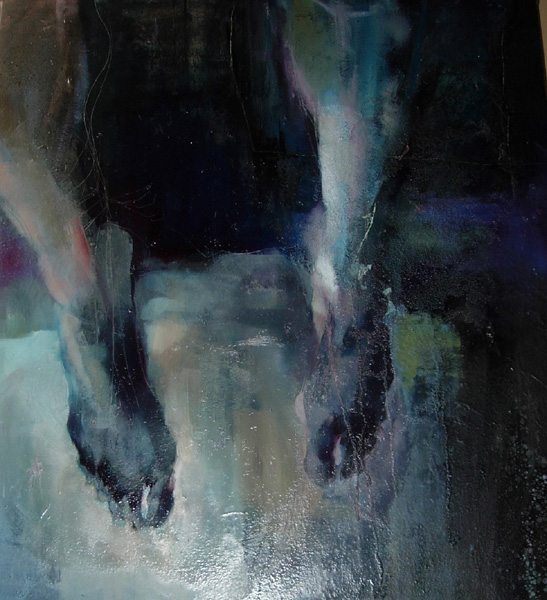