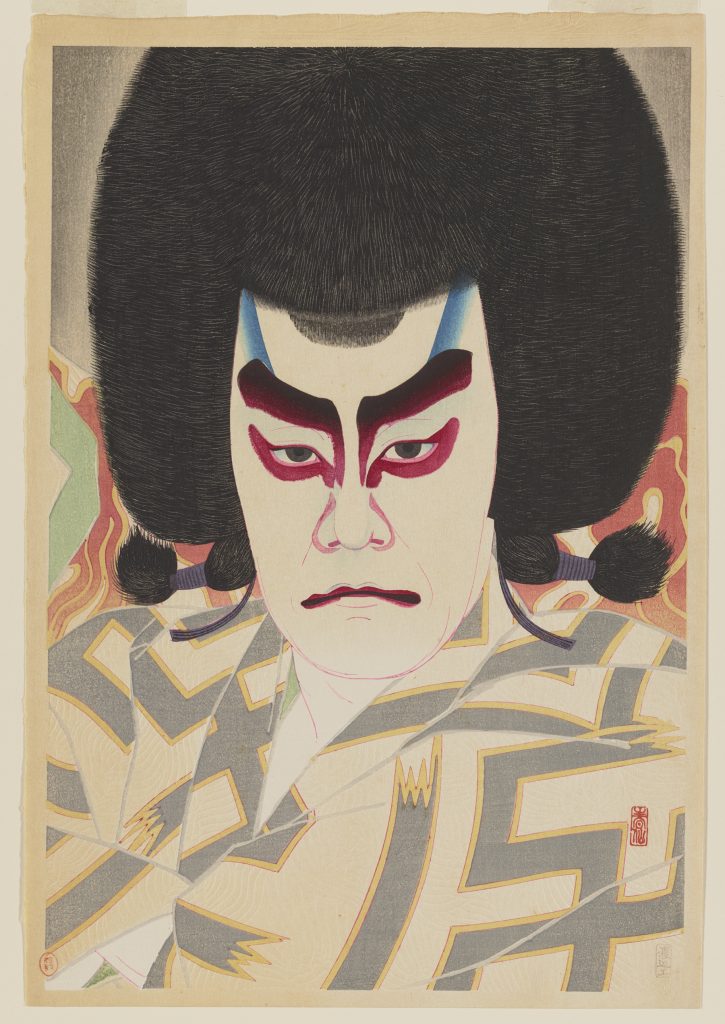 Minneapolis Institute of Art shares with Utah Museum of Fine Arts the advantages that come with not being located in Paris, London, New York, or other locales requiring a presence on the international art scene. Instead of always keeping one eye on their competitors, MIA and UMFA can focus on their local audiences, seeking to bring them intimate pleasures in place of blockbuster exhibitions. In 2017, Andreas Marks, head of MIA’s Japanese and Korean Department, assembled probably the world’s first major show of Shin Hanga, a kind of art that Utahns should be able to really appreciate. After that show closed, and the decision was made to tour what had taken too much effort in gathering for it to be limited to Minneapolis, UMFA was first in line to carry the work forward. True to the commitments these museums have worked to fulfill, from now until April 26, instead of being rushed through crowds, past barely-glimpsed masterpieces already familiar from books, movies, TV, and on mugs and key chains, it will be possible in Salt Lake City to spend as long as one likes close up, often alone, with superb examples of fine art one would likely otherwise never have seen, and come away enriched by the close encounter with very high levels of craft and aspiration.

Shin Hanga, or the New Print, may not be a familiar name, but almost everyone, lovers of art or the indifferent, would recognize its ancestors: images of Old Japan made by a virtual industry that had expired by 1905, only to give rise in turn to half a century of “new prints.” The old print wasn’t called that, of course: it was known as Ukiyo-e, from Ukiyo, the Floating World, and the suffix “e,” meaning pictures. While virtually all the Japanese print art from 1700 until 1900 came from its extraordinarily fertile production system, Ukiyo-e is one of those foreign terms that, like Demimonde and Weltschmerz, once translated requires pages of further explication. After all “Floating World” means nothing in English: it’s a Japanese concept without Western equivalent. At least one native Japanese speaker has argued that a more useful, if less literal, translation would be “Fleeting World.” 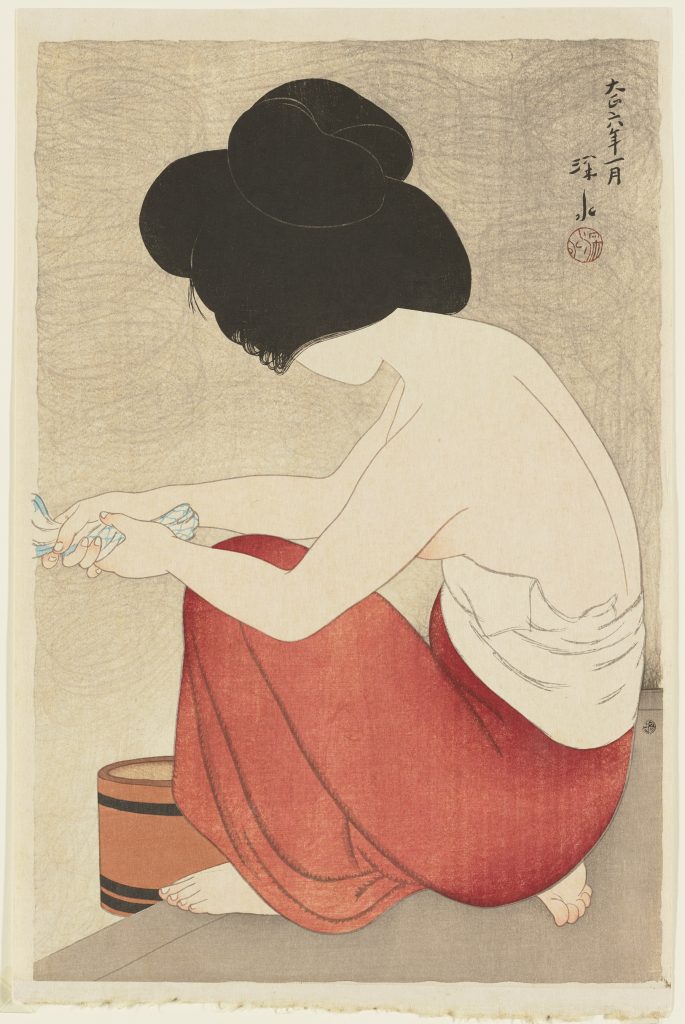 As it happens, Japan came rather late to printmaking. In Europe, late medieval and early renaissance advances in paper making, metal engraving, and wood relief carving led to an explosion of remarkably sophisticated, seemingly fully-developed printmaking around 1500. In Japan, however, the woodblock print emerged almost two centuries later, an event generally dated to 1680; and while prints gained power and versatility for the next two centuries, they never challenged the aesthetic hegemony of calligraphic scrolls. Ukiyo-e was always regarded as a commercial product, cheap and disposable, not unlike today’s Manga (a term that was also used, with about the same connotation, by some of the most popular and successful print artists). As Andreas Marks explains, it was art for the common people, with a print costing about as much as a bowl of soup. “You could skip a lunch and invest in art,” Dr. Marks says. He adds that today those same prints might sell for as much as a million dollars, but the example of Japan’s art is one that could be beneficial for today’s artists and collectors. 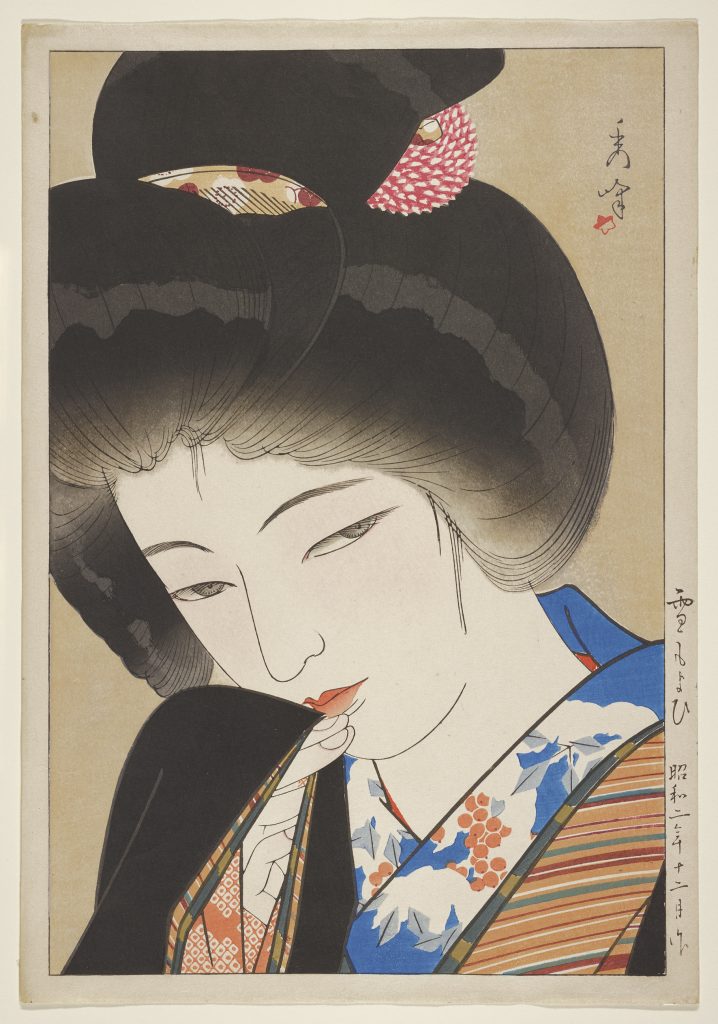 Also unlike Western art prints, Ukiyo-e took on a relatively narrow set of subjects. As in the early days of photography, when celebrities handed out small photos of themselves as “calling cards,” early Japanese prints tended to promote Kabuki actors and attractive women. In time, other ephemeral phenomena, those comparable to shooting stars or fireworks, were added to the mix. Most of these were natural events, such as the half-dozen or more informal seasons, each associated with the viewing of specific flowers, that occurred at regular times throughout the year. While the output of Ukiyo-e printmakers may seem to include everything, in fact all of it can be traced back to as few as three canonical subjects.

It’s not capricious to reflect on the Ukiyo-e system and its output when approaching the New Prints movement. Artists don’t like thinking of their successes and failures as market phenomena, but there can be few clearer proofs that they are than the collapse of Ukiyo-e around 1905, when the desire to collect images of the Floating World suddenly evaporated, virtually overnight. Very few records exist of the strategies and tactics of the print publishers, a fact that has kept collectors and curators like Dr. Marks busy speculating and researching about just what went on over two hundred and fifty years, but it’s not hard to imagine that the designers — mostly painters — the woodblock carvers and printers — who never employed mechanical means or presses in bringing the designs to fruition — and those secretive publishers were all eager to find a new way to carry on with their livelihoods. As it turned out, Shin Hanga, with its emphasis on collecting, never really caught on in Japan, but in the West, where Japanese prints had caused a sensation after 1850, and in fact played a significant part in the revolutionary rise of Modern Art, the disappearance of a genuinely desirable art medium just as it was beginning to be collected in earnest was a huge loss. This was true especially in the United States, where New Prints were, and still are, acquired into collections, some of which found their way in time to Minneapolis. 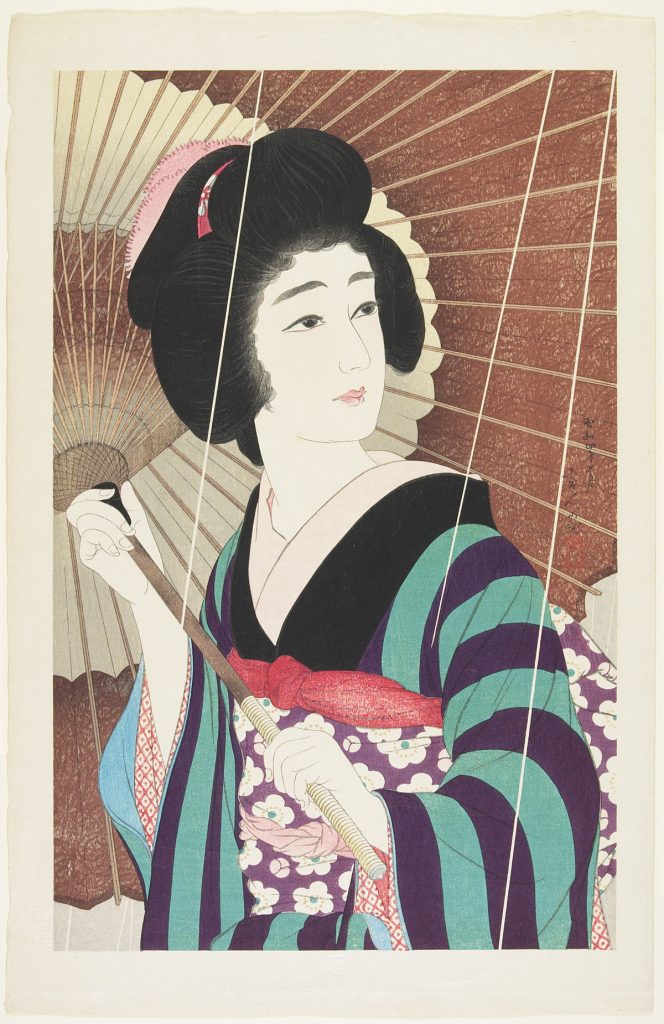 To a casual eye, Shin Hanga are all-but indistinguishable from Ukiyo-e examples. But the differences do exist, and are worth noting. Scholars such as Dr. Marks tend to focus on factual questions, such as who made what, when did they make it, and which artist influenced another. They can answer questions from the curious, such as why Japanese printers used only cherry wood to carve their matrices, or printed only on mulberry paper. But the qualities that really stand out in Shin Hanga, and place the art among the greater achievements in printmaking, are more subtle and aesthetic, and suggest that the transition from one era to the next involved an essential liberation of the artist. These are still realistic images, an anachronism in the years between 1915 and 1960, and still, like Hollywood movies, the product of a craft system not unlike a factory. For Utah art lovers, the familiar dilemma of how much to admire the landscape, how much to admire the artist’s copy of it, sometimes still applies. But where the Ukiyo-e print was relatively small, quickly made, and crowded with as much nature or as much urban life as possible, these are large images that allow their subjects, typically individual persons or close-up views of extraordinary buildings, to be wrapped in tranquil, even meditative moods and to reveal themselves in still, quiet reverie. Criticized at times for nostalgia or sentimentality, they would more usefully be set aside another popular form of Japanese culture: the garden. A Japanese garden is many things, but it is never comprehensive. The plants, stones, and accessories are each deliberately chosen and precisely placed. It’s like a picture of nature in which the vast, visible world is represented by things one can touch. Whatever doesn’t contribute to the effect is (quite literally) weeded out. This is, of course, the reverse of the printmaking artist’s process, which is to put in only what serves his purpose.

Saying “his” is not carelessness. Sadly, like in Kabuki, where even the women are played by men, Shin Hanga was a male enterprise. There was, of course, and happily still is, a parallel Japanese response to the end of Ukiyo-e that took the Western model to heart. Those artists learned to do all the steps in making a print, and worked in their own studios, like painters and sculptors, but also like potters and weavers. Every year, Saltgrass Printmakers brings a few of them to Salt Lake. 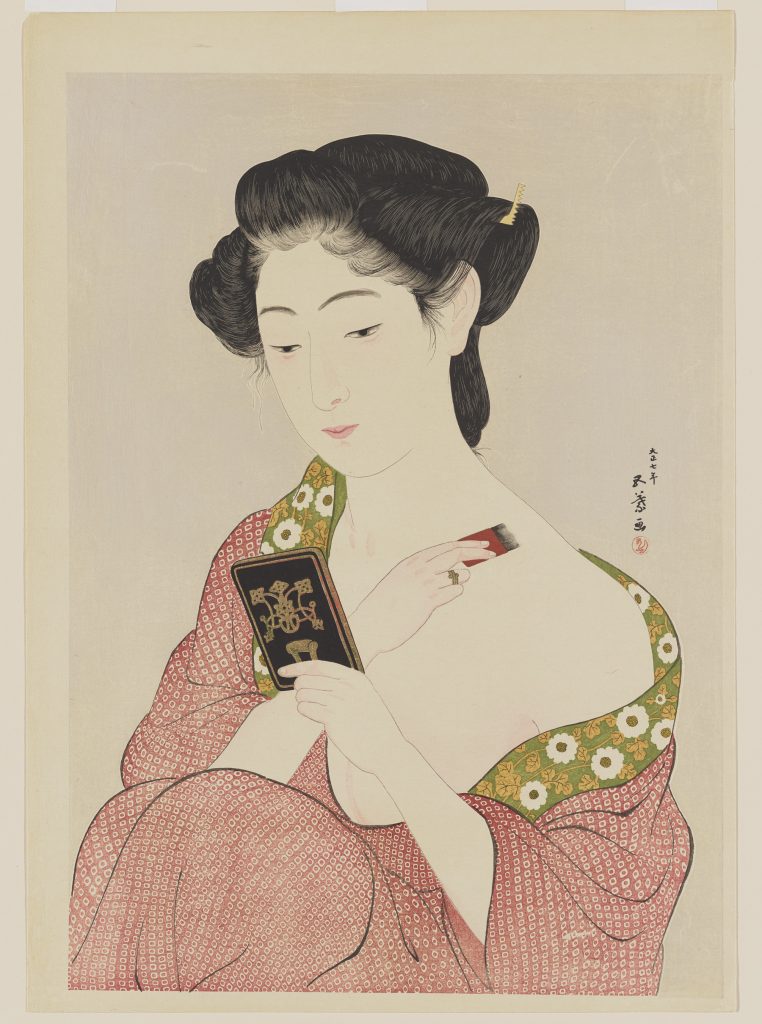 There’s plenty that is debatable in this universe of artistic choices, but it won’t be the eye that might be offended. When Vincent van Gogh, James Abbott McNeill Whistler, and other artists too numerous to mention succumbed in the 19th century to the appeal of Japanese prints, a big part of what they fell for was the flatness: the absence of depth in the representations. It was like one step back from the Western mastery of optical reality that had been achieved a few years earlier, only to become a kind of visual straitjacket that reined in creative freedom. A few years later, Shin Hanga artists, counteractively influenced by Western art, offered a contrasting way of rendering depth. In the brilliant landscapes of Kawase Hasui (1883-1957), perhaps the climactic figure in both Shin Hanga and the current show, brilliant natural colors and the bravura use of the woodblock, which equates one block with a single color, create compositions not only in the two dimensions of the image, but in implied depth as well. This was happening at the same time as filmmakers were using the motion of the camera to achieve similar marvels of composition-in-depth, but the prints do it without moving. Just as avant-garde art was repudiating the illusory space inside the work, Shin Hanga was giving it new life. If there is no other reason to view art in the original, it is this. Not since the visual theater that was Baroque painting had artists transported the willing viewer into an alternate space as real, and often more expressive, as the one they actually occupy. 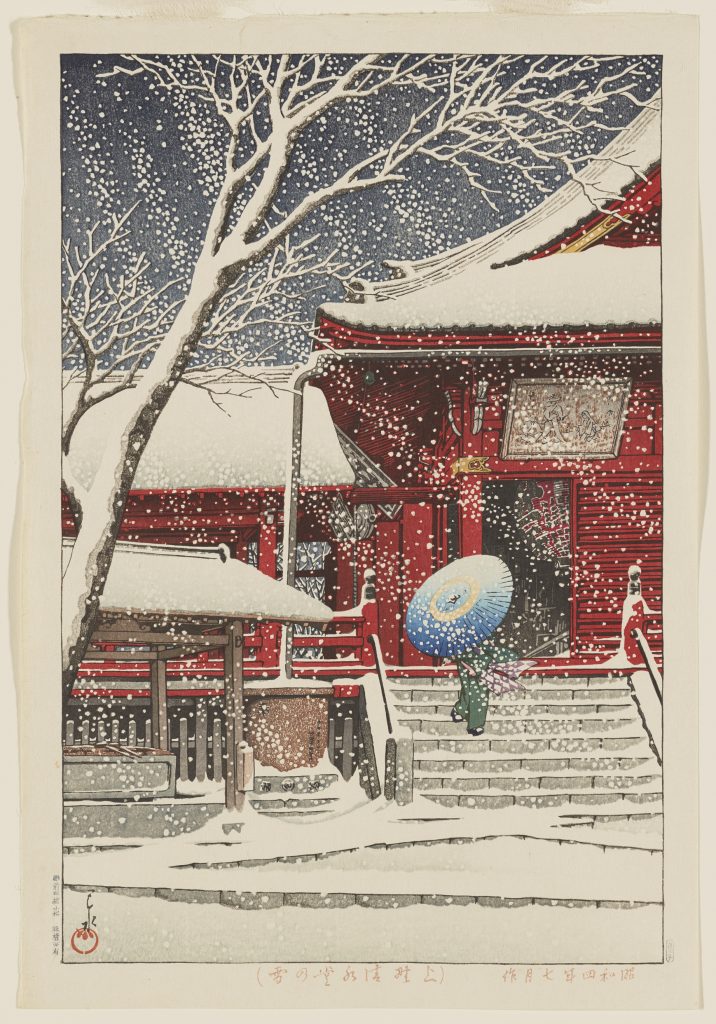