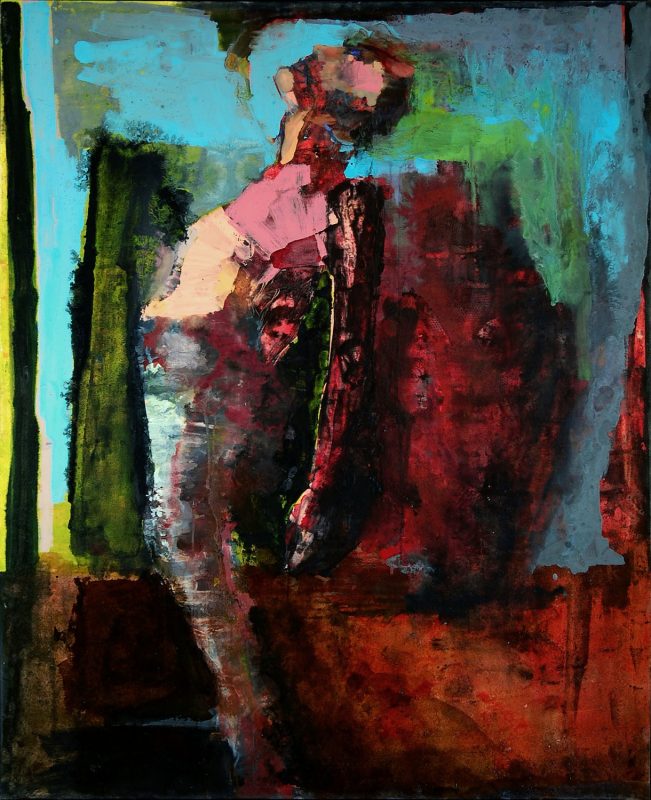 In Deficient, his current exhibit at Nox Contemporary, Tyler Spurgeon presents a series of semi-abstract paintings that probes the question of “who or what determines an individual’s value” in relation to a “societally imposed sense of inadequacy,” and does so in a frank and compelling way that challenges the viewer to find the answer. The paintings are not easily digestible. Executed in heavy, dark skeins of color, with slabs of meat or the skeletal and flesh forms of the human body as subject, they are not even easy to look at, and in order to engage with Deficient the audience must be prepared to grapple with work that is definitely not pretty, arguably garish, grotesque even — a caustic commentary on the harsher aspects of existing in contemporary society. These paintings come across like a secularized and modernized Seven Deadly Sins, but less portentous and more nihilistic.

Spurgeon comes to Salt Lake City from Chicago, where he studied at the Art Institute. He recently completed his MFA at the University of Utah and in this, his first solo exhibit in Utah, he reacts to what he calls the “soft violence” society wages upon individuals, where they are reduced to “their most basic component of value.” A series of smaller paintings showing hanging meat are an obvious symbol of a consumptive, reductive society, but in Spurgeon’s larger works, where the human form is abstracted and blurred, lost at times in the violent paint application, Deficient comments on more than just physical conditions.

For his commentary, Spurgeon does not point the finger at “the man,” but instead looks closely at the individual, beneath the skin, at a visceral scale of flesh and bone, to penetrate to the core of the subject. At this level it becomes apparent just who or what is determining value and the answer is surprising. “Newton,” a distinguishing piece in the exhibition, seems to reveal the “societally imposed” psychological loss of control and manipulation. It is a frightening image: the figure seems suspended in space, as if he has lost the mobility of his limbs and ultimately his fragmented mind. 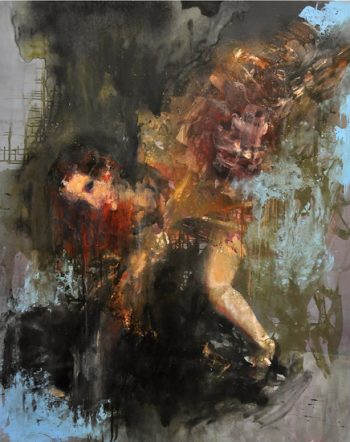 “Barye” is an image that seems to gauge how the individual exists in a reality where one is never alone, even from the self. In it we see two figures in violent conflict with each other. They have been stripped to their skeletal structure, as happens frequently in these works, so that one gets a sense of the devouring conditions of an aggressive society based on the dynamics of difference. This is not a subtle conflict: the figure to the left seems to be coughing up blood and might seem extreme, yet it is often to an extreme that the individual is conditioned from such dynamics of difference.

An image that might seem even more grotesque and more caustic is “Mite,” painted very abstractly in reds, blacks and yellows, and altogether a compositionally unbalanced picture. Balance and consistency are not its intended representation, though, but rather gluttony and greed, lustful appetites, laziness and complacency. In the painting we see a shadowy figure defecating, and as one asks, “who or what determines the individual’s value,” one can only think of the missing denominator as “societally imposed” appetites and indulgences that cause one to debase themselves with such candor. It is an ugly picture we see and it is an ugly aspect of living in today’s world that causes many to fall prey to overindulging themselves in gluttonous living.

“Doite” is not the sort of painting with a content that is pleasant to deal with and is an open door to a cacophony of Freudian analysis. Again, the picture is not balanced, with much heavy black to the side and a field of light blue to the upper right with a heavy blurred figure obscured in the blackness.The figure is groping its nakedness in the dark, hidden from the truth, just as we are unsure of how to address this painting. If one asks the question “who or what determines the individual’s value” and considers all things “societally imposed,” there is no limit to the commentary that Spurgeon is aiming towards; it is not pleasant and something we would like to avoid, but telling of today’s world. 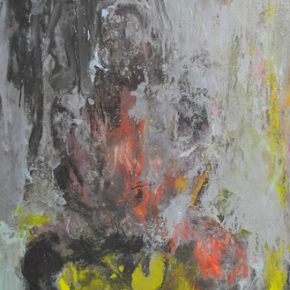 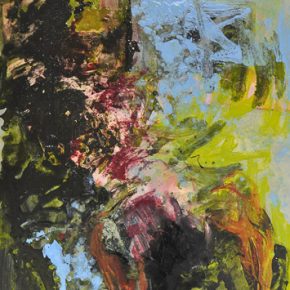 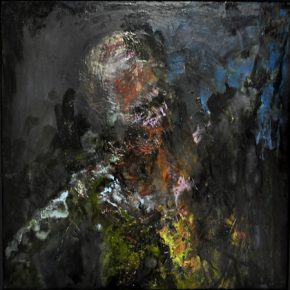 One last image, more frightening than the rest, is “Bar,” a portrait of sorts, ugly and morbid, a skeletal figure in abstracted bright pastel colors loosely and freely rendered that seems to laugh sardonically at the face of any who look into the blackness of the space which encompasses it. Asking myself these questions, what is it that Spurgeon is trying to allude to with “Bar,” the answer is only too apparent. I see fear. It is hard to miss. Even if I don’t always share the vision, it is something that I can appreciate in Spurgeon’s work as good art, as an authentic, frank, honest reaction to the angst of the modern individual in a society at odds with individual worth.

Tyler Spurgeon’s Deficient is at Nox Contemporary in Salt Lake City through Nov. 5.