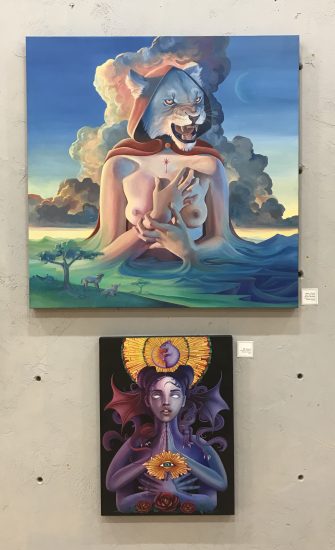 Upon entering the Urban Arts Gallery at Salt Lake City’s Gateway Mall, one sees what appears to be a boutique selling T-shirts, knickknacks, art prints, etc. It doesn’t feel like one has arrived at Seeing the Sacred, the gallery’s current show. Even moving farther back into the cavernous space it can be difficult to tell what are simply works on permanent display (or from previous exhibitions, as in the case of one or more of the alcoves on the gallery’s north wall) and what is part of the show. Featuring work by more than 20 artists, from geodes in resin, to marble sculpture, to paintings and photography, the exhibit explores individual ideas of the sacred, but its successes can sometimes be hard to see.

The female figure is a recurring motif throughout the exhibit, with some artists so closely related in subject and style, however, it is necessary to look at exhibition tags to differentiate their work. There seems to be a lack of discussion about the female divine in patriarchal religions, which may be a reason why these artists have chosen the female figure as their interpretation of spirituality, whether it is the surreal figures in exotic settings in Scott Tuckfield’s paintings, the hybrid animal-human figures in Halley Bruno’s works, or Birdie Hess’ “Goddess” images, digital images of women wearing headdresses and bandanas, their faces decoratively painted, with images like eagles and celestial bodies woven into a cosmic background. 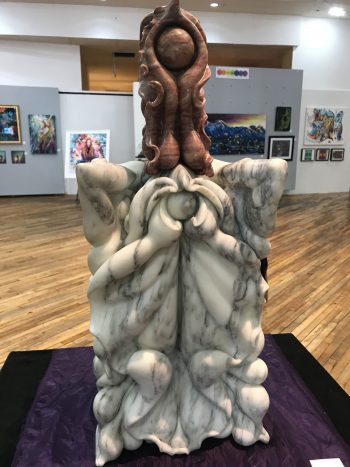 In the middle of the exhibition space, Mykael David Lazzeri’s sculptures look for the sacred in less anthropomorphic forms. Only one of his sculptures shows the human form, while the rest depict fossil-like forms made from marble, alabaster, honeycomb calcite, and the like. These are quite mesmerizing in that they feel organic and look as though they were made of a less static material. Because we are currently living in an environment that is changing rapidly, a focus on forms inspired by nature and Earth feels appropriate as a metaphor for the spiritual.

The human form is also absent in the eye-catching, lighted paintings by Peter Nielsen. These are made with flatly painted acrylic in RGB colors depicting subjects such as mandalas, skulls, and geometric shapes. Inside the frames, LED lights flash and shift transforming the painting. In “Sacred Flower,” the effect from the lights makes the image appear to be spinning so that one feels pulled into the image itself. Nielsen’s work seems to be heavily about visual cognition and how the mind perceives something in a different way when the colors and values change.

Steve Rasmussen’s images, which appear next to Nielsen’s display as well as on a central pillar, also show how presentation or context can change an image. Rasmussen uses photographic elements, manipulates them digitally, and then displays them in frames using two layers of clear Mylar. The effect is quite nice and adds a three-dimensional feel to the images. “Blue Tanks (Frogs)” is particularly appealing in that, as the title implies, it looks like a tank, but also subtly like a mechanical frog.

Whether it be a clearing in a grove of trees or a building on top of a hill, most cultures delineate the space between the sacred and the profane. It’s a strategy that would also work well with exhibitions. Few of the works in Seeing the Sacred are given enough room to be appreciated and risk blending into the entire space. When one manages to see it, the exhibit offers some successful works of psychedelia and the fantastic, as well as works that suggest spirituality can be expressed as much by a change in perception as by any visual objects. However, much of the work is too similar so that the exhibit does not offer a wide variety of interpretations as to what is considered spiritual or sacred.

Kylie Millward is a teaching assistant and M.F.A. candidate at the University of Utah.