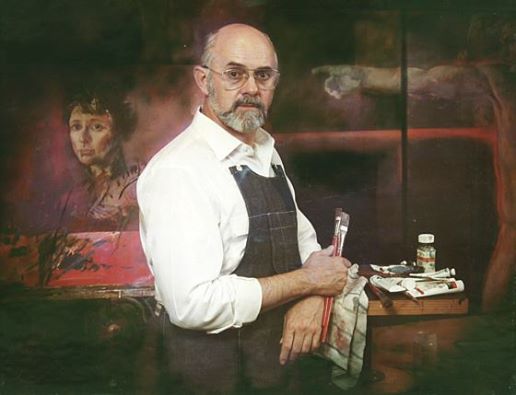 Within almost exactly a week, Utah has lost two fabled artists. Each, coincidentally, had a controversial work installed at the Salt Lake City International Airport: Anna Campbell Bliss was able to revise hers to satisfy what she called “the Breast Patrol;” Trevor Southey, a gifted and influential artist who died Tuesday at the age of 75, had his exquisite painting, “Flight Aspiration,” of a nude man and woman flying across a dark, sunset sky, removed from that facility. (The work included a bird and airplane that also were nude, as someone once gleefully pointed out.)

The painting was purchased from the artist by architect M. Ray Kingston, who ultimately gifted it to the Utah Museum of Fine Arts. “After it was dumped by the airport due to Joy Beech, director of the American Family Association, Utah chapter, headquartered in Tupelo, Mississippi, I put it in my house and stored it for four or five years,” he says, “because [UMFA founding director] Frank Sanguinetti didn’t want it in the museum.” 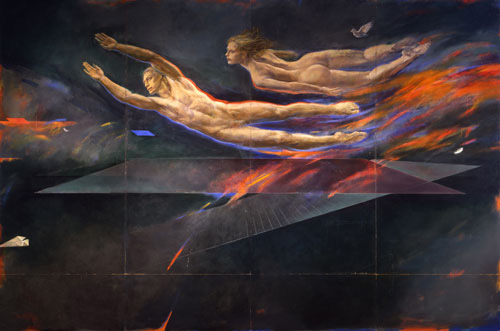 Ruth Draper, former executive director of the Utah Arts Council, says, however, that Sanguinetti earlier had helped pick out the Southey artwork for the airport. “Little did he know that Joy was hiding in the woodwork.” Southey’s painting was a fiasco there, she says. Draper recalls being rousted out of bed at 7:30 a.m. to go to airport board meetings (where Beech often had put herself on the agenda) to refute the conservative activist’s notion “that anyone who wasn’t quite normal would see that picture and go out and commit murder and rape.” Eventually, Draper says, “Beech stopped coming and had basically given up. The painting was displayed for a year or a year and a half. Then I got a note that it was in the way for remodeling and that they needed the wall space for passenger information. I half believed them.” That’s when Kingston stepped in.

Draper believes Southey is “one of the finest artists we’ve ever had in Utah. He was honest, forthright, brilliant – just gifted. It was a shame his art was mostly being shown in other places.”

Five years ago, the UMFA held an exhibition of the artist’s works that drew more than a thousand people just to the opening. In the November 2010 edition of 15 Bytes, critic Geoff Wichert wrote:

The 1,100 Utahans who pressed into the UMFA for the opening certainly made it feel like a blockbuster. Even more striking was the way they moved almost reverently through the galleries, talking quietly to friends, but then were suddenly moved so strongly that they spoke to complete strangers with confidence, the way one does in church. This artist was so popular with these people that it was difficult to imagine how his pious and skilled images could actually ever have caused offense in person. Accepting uncritically for a moment the restrained, academic character of the paintings, prints, and sculptures that met the eye, it was possible to say that there is, at present, no artist in Utah—and few beyond—who brings to the work the sheer plastic power that Southey has reveled in for decades. The human figure, in which he excels, is thought a truer test of ability than landscape or nature studies, but because Southey’s figures so often display outward signs of inner suffering, his uncanny talent often shows itself more clearly in subjects that are less open to empathy: dogs, plants, even canned fruit.

Southey, who converted to Mormonism in his native Rhodesia (now Zimbabwe), moved to England where he attended school at the Brighton College of Art in Sussex, then came to Utah where he obtained two degrees from BYU, and taught at that campus through 1977. He painted the figure, but was not allowed to have his students paint from nudes – BYU requires models to wear leotards. 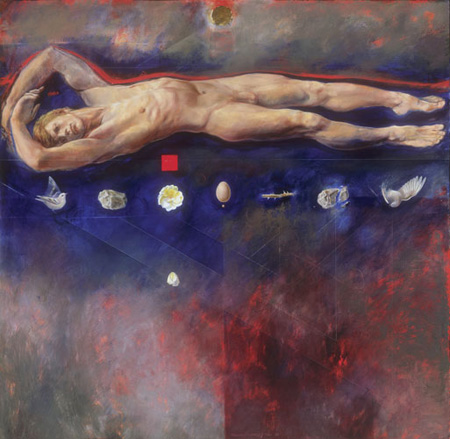 In 1967, he married Elaine Fish. They would later divorce. The couple has four children.

His work is included in private collections throughout the world and includes drawings, prints, stained glass, paintings and sculpture. Reconciliation, a lavishly illustrated volume he wrote about his life and work (with K. Mitchell Snow) was published in 1998.

He lived in the Bay Area for some time, after challenging the LDS Church with his avowed homosexuality, returning to Utah a couple of years ago for health reasons: prostate cancer and Parkinson’s. Earlier this month, Southey invited friends to a gathering and sale of his artwork at a daughter’s home. He died in a Salt Lake City hospice where he had lived for about a year.

A memorial service for the well-respected and beloved artist will be held at 3 p.m. Sunday, Nov. 8, in the Dumke Auditorium, UMFA, 410 Campus Center Drive, University of Utah, Salt Lake City.