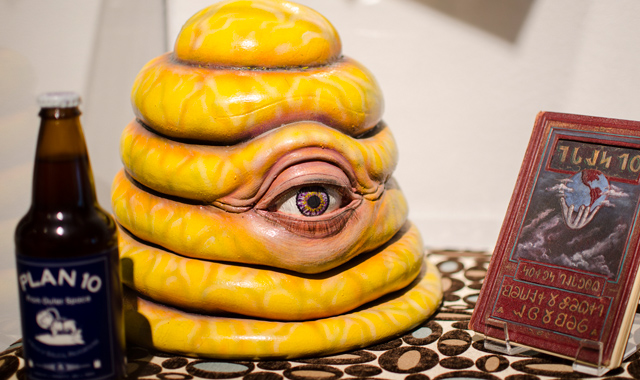 Not many filmmakers receive solo exhibitions in art museums. Trent Harris, however, is unlike most filmmakers. The Utah native is best known outside of his home state, where he maintains a cult following around the globe. As opposed to more traditional filmmakers, his work is highly experimental, allowing for elaboration in a variety of artistic mediums. Echo Cave,  Harris’ solo show at the Utah Museum of Contemporary Art (UMOCA), stems from a desire to interact with his works outside the standard film festival format—uncovering film’s role in engendering multiple creative expressions and perspectives.

As the creator of over 100 films, Trent Harris has a legion of loyal fans keenly aware of his contribution to avant-garde cinema. UMOCA views Harris as a legitimate, albeit marginalized, voice in the local art scene. Aaron Moulton, UMOCA’s former Senior Curator, developed an interest in Harris quickly after arriving in the state, “I became friends with Trent upon moving to Utah. I collaborated with [him] when we had the artist Constant Dullaart organize a performance night. From then on it was a natural dialogue.”

UMOCA’s first Utah Biennial (2013) continued this collaboration and made a concerted effort to introduce Harris’s work to Utah audiences. The Biennial took its title from Harris’s book Mondo Utah and constituted, according to Moulton, of “a structural appropriation of Trent’s book and a way to think about regionalism and the folkloric in an exhibition form.” After the biennial, an ensuing exhibition devoted to Harris’s work seemed fitting, as Moulton states, “The biennial became about setting a stage and stoking a context for digging deeper into a practice like Trent’s.”

Echo Cave delivers on its premise. It is a fitting portrait and a genuine attempt to bolster Harris’s reputation in his home state. Not only has Harris’s work long been misunderstood in Utah, but as Moulton puts it, “it’s important for cultural institutions to remind us who we are and to sensitively unearth the parts of us that we’ve forgotten. Sometimes it’s about varying degrees of visual literacy and whether it’s something or someone’s time to be understood.”

Echo Cave makes spirited selections from Harris’s long and diverse career, bringing to our attention the many recycled characters, motifs and symbols that accumulate in his body of work.

Harris’s biography is inherently woven into his work. An entire wall of the exhibition is dedicated to mapping Harris’s development as a filmmaker-starting at age 11, when he snapped a photograph at his sister’s wedding. The photograph, a seemingly candid shot of individuals standing beneath a roof with a large sculpture of an octopus set atop, sets the stage for Harris’s longstanding curiosity for the odd and uncanny. The octopus image is paired with other photographs taken throughout Harris’s career. Text and arrows are added to create a visual navigation from image to image. Arrows are in fact a common symbol throughout the exhibition, used to both guide and distract the viewer from points of significance. Although symbols such as arrows appear didactic, they in fact reject such easy associations.

After the infamous octopus photograph, Harris began working for local station KUTV, where he was responsible for producing a series of investigative segments cumulatively titled “Atomic Television.”  Bordering on kitsch, these segments are often laced with comical undertones. Adjacent to the wall of photographs, the exhibition recreates a 1970’s style living room, complete with vintage furniture, a bookshelf, wall decoration and a television playing selections from “Atomic Television.”

Connected to the photographic wall and faux-living area is the exhibition’s primary spectacle—a room containing evidence of a lively film career. Visitors entering this space are greeted by a large screen displaying excerpts from various documentaries which Harris narrates in a discombobulated and personal manner. The sights and sounds emanating from this enormous screen are impossible to ignore—as if Harris is personally accompanying viewers throughout the exhibition. Surrounding the screen are various artifacts from Harris’s career, including enlarged film stills, posters, props and a large photographic work entitled, “My Brain.” In this photographic collage, we see repeated images that appear elsewhere in the exhibition, mixed with portraits of individuals from around the world. Intermixed throughout the collage are arrows, yet again included to ambiguously alter or guide our vision.

Whereas the first room of the exhibition highlights Harris’s work, the second room is decidedly autobiographical. The room is littered with screens displaying scenes from his most recent film Luna Mesa (2011) and digitized excerpts from his journal.
These video instillations illuminate the dark room with bright colors and abstract shapes. Screens enlarge selected pages from the journal, that is also presented in physical form in a display box. Harris toys with our traditional notion of an artistic journal as informative and didactic. Instead, the journal—in its various forms—is a work of art itself, rather than a prerequisite to a completed project.

The exhibition seems to play upon Harris’s interest in documentation. That is to say, his preoccupation with cataloging certain autobiographical episodes as works of art themselves.

Consistent with this interesting propensity for channeling creativity through the banal, the exterior wall of the exhibition (lining UMOCA’s hallway), contains a work entitled, “Bruce and Me.” This work details the correspondence between Trent Harris and fellow artist Bruce Connor. Harris includes letters and a written statement combined with Pop collages of wild and incoherent images that are overtly comical but also endearing.
Like Harris’s work as a whole, the correspondence relishes in the absurd—using repetition as a vehicle for lunacy.

The exhibition culminates in the new media gallery, where Harris’s Echo Cave title comes full circle. The gallery’s dark enclosed space mimics a real cave, a space where viewers are visually assaulted by multiple clips from Harris’s film career on one giant screen. To Harris, this selection is a natural conclusion, a finale for those patient enough to sit in the room long enough. Perhaps then, the echo cave, with its silent and contemplative aura, is the best possible venue for taking in the enormity of Harris’s strange artistic vision.