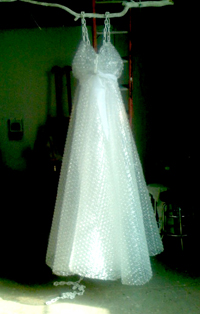 Someone has decided that the Trustees of Westminster College shouldn’t be looking up Trent Alvey’s dress.

That seems like a self-evident, uncontroversial proposition. But the dress is actually a work of art Alvey created in 2007, and has been hanging in the Giovale Library as part of the Westminster alumni exhibit. 9-foot tall bride’s dress, made of bubble wrap, crenelin, stick and plastic chain, has been hanging in the southeast corner of the library’s tower. It was removed this week prior to a Board of Trustees meeting to be held in the libarary today and tomorrow.

It is unclear whether the decision to remove the work of art was made by someone in authority (say the College’s President), or whether that decision was taken on by an underling in facilities management. It was suggested that the piece, which was hanging from the ceiling, could be hoisted up if it was causing a disturbance to one of the tables at the event. But since that might put the Trustees in an indelicate position, the work was removed from the room.

The incident brings to mind both Doug Snow’s mural in the Utah Supreme Court — seen as unfit for that august body — and Jedediah Caesar’s public art piece removed by a cleaning crew in Culver City earlier this year (and a similar incident in Germany a few years ago).

It also highlights a problem that has been on our minds lately — how artists and art institutions interact and the best way to avoid misunderstandings (like, will a piece be hanging during the entire exhibition or only when the people using the facility don’t mind it). That’s why during 2010 the Artists of Utah board will be drafting a “Best Practices” document to address some of the concerns that arise between artists and the galleries and institutions that show their artwork.

The Westminster alumni exhibit is not the only place Alvey has shown her 9-foot tall bride’s dress. It debuted at an exhibit at Nobrow Coffee in 2007, and has also been shown at the Springville Museum of Art’s Spring Salon, where it received an award. We won’t go so far as to say that Westminster’s decision to remove the dress is a form of censorship, but in an odd twist of circumstance it makes Utah County look more liberal than Westminster College.