The Conscious Awakening of Dreams: In Memoriam, Tom Mulder 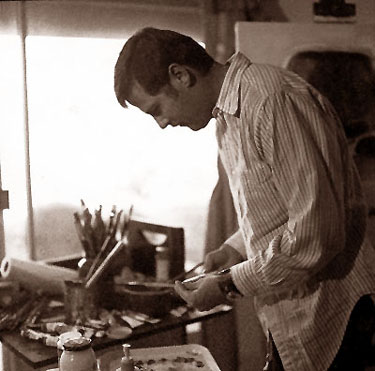 Losing someone is never easy, and cleaning up what they left behind can be a daunting and melancholy task. In the fall of 2008 a group of local artists at Captain Captain Studios began to talk of putting on an exhibition for one of their colleagues, who was dying of colon cancer; they wanted to do something to show their respect for their studio mate, Tom Mulder and hoped to display his works. Mulder died before the idea could come to fruition, and what they hoped to do with his help and assistance they are now doing on their own. Going through a packed artist studio and two storage units, with over 500 paintings, they are selecting works to be exhibited at the Rio Gallery this month.

J. Thomas Mulder was born in Salt Lake City on March 14, 1939 to Dr. William and Gweneth Gates Mulder and spent most of his life in the city. He grew up playing in the family barn, picking cherries with his twin brother Dick (Richard) and sister Barbara. His father was a Dutch immigrant who came to the U.S. with his parents in 1920. Six years later they moved to Salt Lake City. At his death earlier this year at the age of 92, Dr. Mulder was described as “a gentleman scholar, mentor, bibliophile, Mormon historian, English and American studies professor and advocate of Indo-American scholarship.” When Tom was still a young boy the family moved to Boston where his father earned his Ph.D. in American Civilization at Harvard. They returned to Salt Lake where Dr. Mulder taught at the University of Utah’s English department.

Tom graduated from East high school in 1957. When he was 18, his father took a leave of absence to teach at Osmania University in Hyderabad, India. Tom joined the family and studied for a year at Nizam College. His father continued to return to India as he developed the American Studies Research Center and library in Hyderabad. It was there that Tom learned to love the sun-belt cultures, and throughout the years enjoyed traveling to places like Italy, Greece and Mexico. 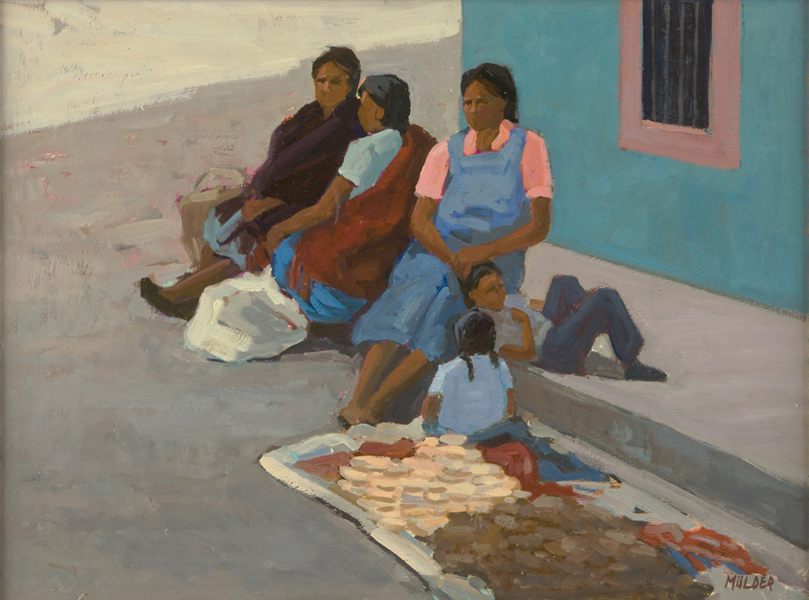 When he returned home, Tom studied at the University of Utah where he graduated with a BA in 1962. Upon graduation, he joined the US Air Force. He never intended the military to be his career but the Vietnam conflict offered him the choice of being drafted upon graduation or volunteering to serve as an officer. He spent a total of 10 years in the air force serving at Chanute AFB, Illinois; Fresno California, and Salt Lake City; Peshawar Pakistan, Mclellan Air Force base in Sacramento. He studied at the University of Illinois when he was at Chanute, and took art classes at the University of California in Fresno. During his early years in the air force, he entered an all air force art contest and won first place. The picture was of an Indian Bazaar scene — the first of many.

He traveled to Italy and Greece several times, often taking students with him. He also returned to India and visited friends in Mexico.

It was more than a decade later that he continued his education at the University of Alabama to pursue an MFA. At the time, the Abstract Expressionists heavily influenced the school, and Mulder, who loved to move oil paint across the surface of a canvas, did his fair share of abstract paintings. Although at school, he was already looking toward his true desire … to return to the West and paint landscapes. “The Tuscan countryside is what whetted the appetite for landscapes,” he wrote in September of ’08, “plus the western landscape in this area of the country.” 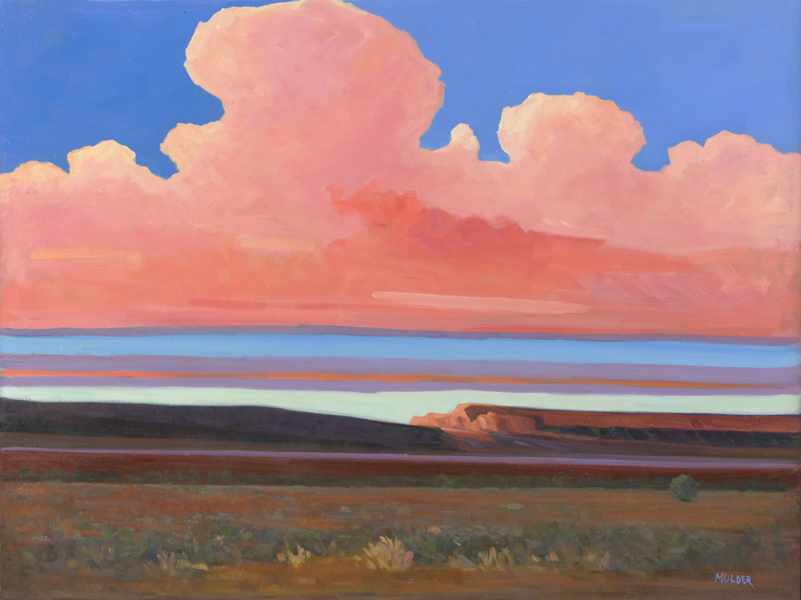 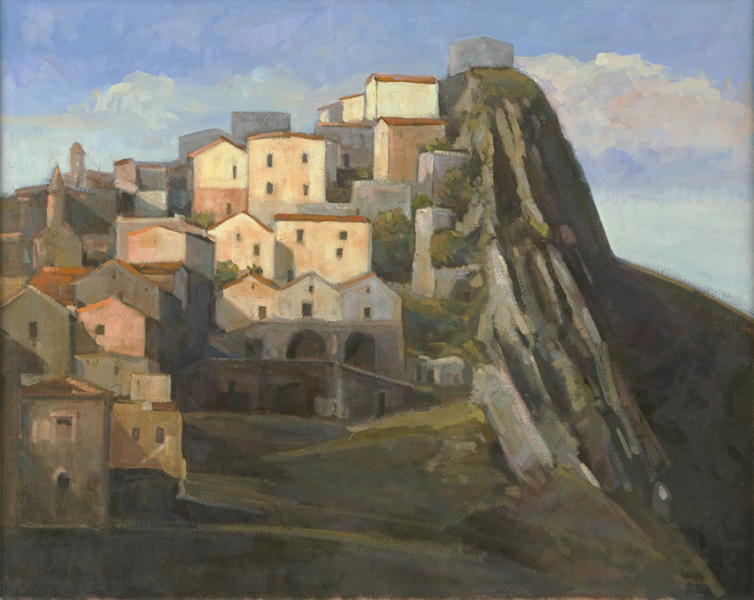 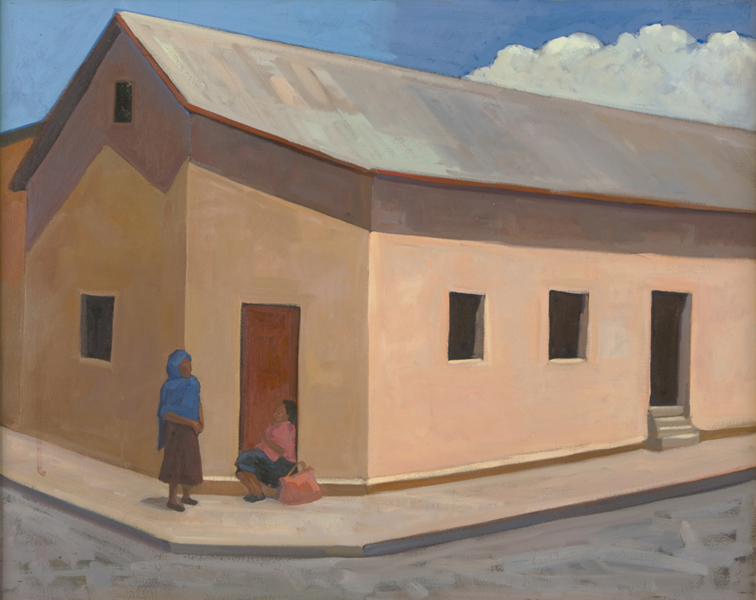 At school he was always in the studio — he didn’t have time for the poses of being an artist, preferring to spend that energy painting. “He got along with everyone and everyone envied his work ethic,” recalls Rhonda Roebuck, who studied with Mulder at Alabama. “He was never wasting time, time was meant for painting.”

In his last years that work ethic continued. “Tom was always friendly and approachable,” Captain Captain artist Tessa Lindsey says, “but there remained an inviolable privacy shrouding his studio that we never breached. In fact, it wasn’t until his passing that we learned about his extensive travels or realized the breadth and scope of his work, and it’s a small tragedy not to have fully expressed our esteem and delight to one of our great peers.”

After Mulder passed away on November 24, 2008, his colleagues were determined to show their esteem. After the memorial service, Chase Leslie got to work organizing his studio, making it presentable, even for his family. “It was a pleasure and it helped me to understand Tom’s artist spirit,” Chase recalls, “it could only be done by another artist, sorting the best paintings from the not-so-great or unfinished work, weeding out the unsigned and damaged pieces.” All of the artists in the building sorted through brushes, paint, and supplies that each could use. When Chase and Trent Alvey started looking through the more personal stuff, they instinctively understood that Tom’s memory had to be patched together with paintings, stories, personal belongings and things that Tom had written, to preserve the memory, as certainly as if they were painting a portrait.” 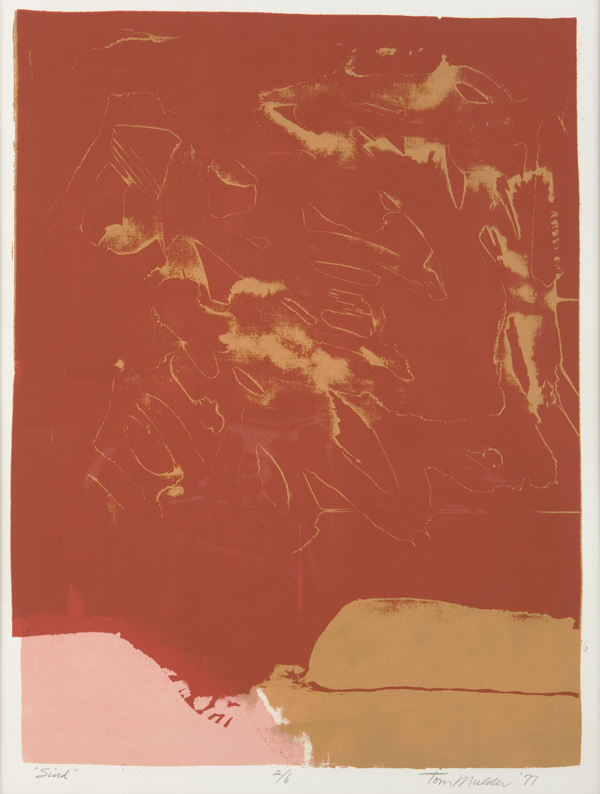 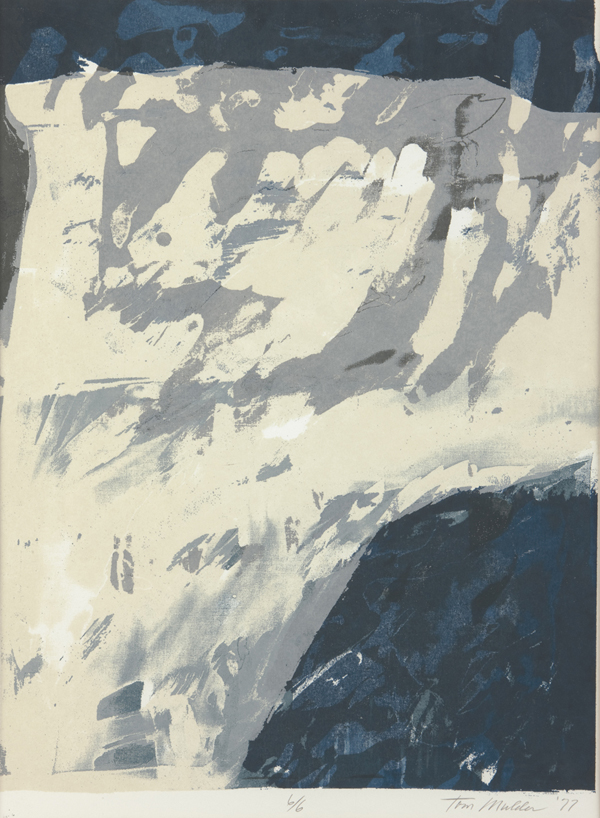 They ended up putting the work into sections: university work, abstract, transitioning into figurative, exotic travel, and most recently his work that had resolved into a minimalist style of brightly colored western landscapes. These paintings were well known at the Utah Arts Festival, where Mulder exhibited for many years. Mulder attended many other prestigious festivals across the country, always finding a generous host among his friends and patrons. Tom began to earn awards at an early age with a first place prize in the Utah State Fair in 1962. He continued winning awards including 1st place in the 2003 San Luis Obispo Plein Air Festival in California. He also enjoyed sharing his joy of the landscape and painting by teaching at workshops, like the one he led at the LaRomita School of Art in Italy.

Laura Boardman remembers Mulder as a pack rat. “Tom was a collector of many things; his house was stacked to the ceiling with all kinds of stuff. We asked what he wanted to do for his birthday one year and he said, ‘please help me clean my house.’ It was stacked with hundreds of painting — mostly half complete. We spent a whole day organizing as he sat on the porch smoking to stay calm as we cleaned. At the end of the day, we drank wine and laughed, as he struggled with getting rid of anything.” 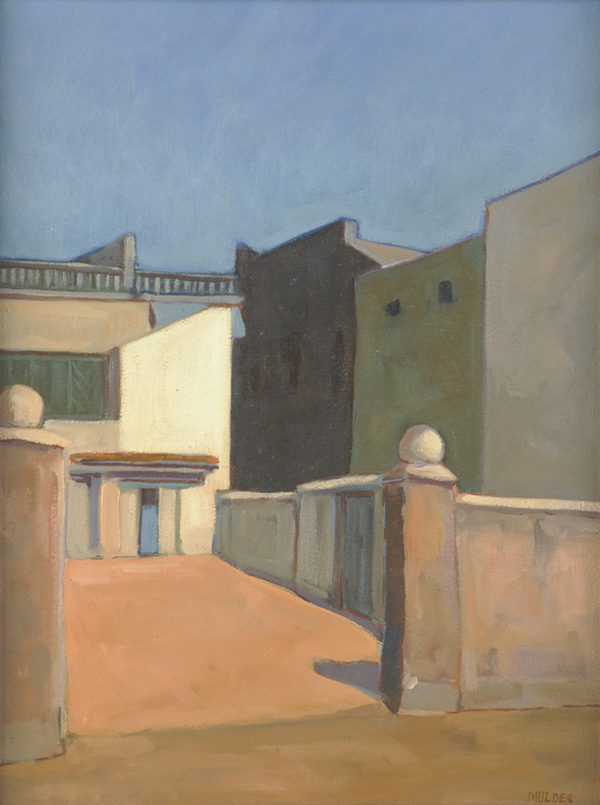 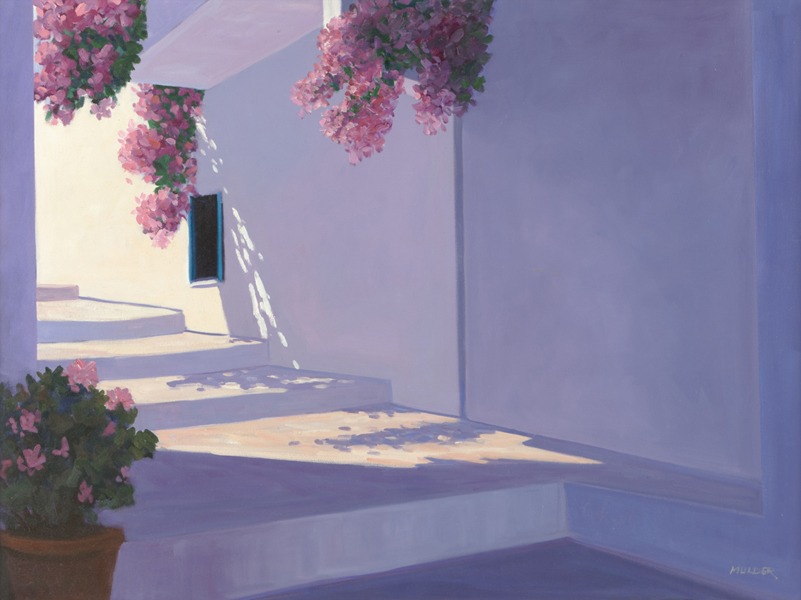 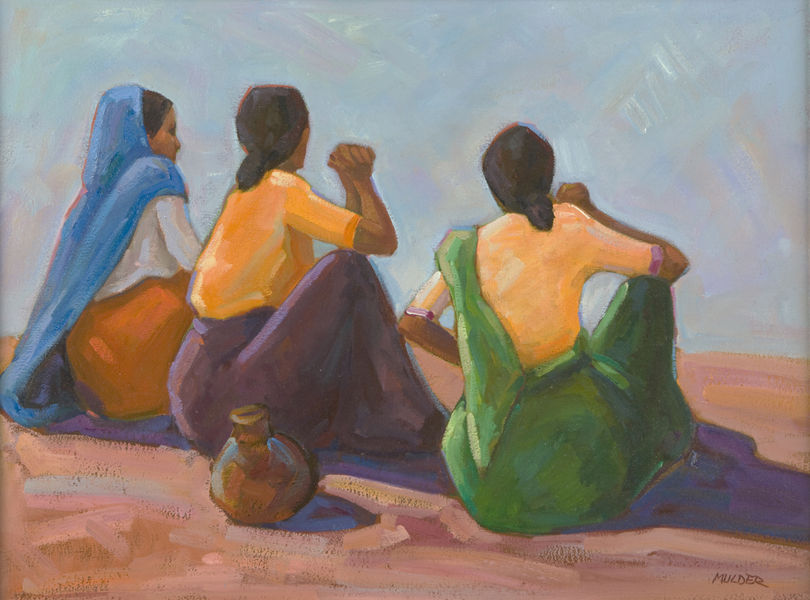 As we go to press, the artists of Captain Captain Studios are busy preparing their tribute. Sri Whipple, Steve Larsen, James Randall, Patrick Munger and others began to pitch in to help prepare his work: Tessa Lindsey and Trent Call will clean and repair frames. Skylar Nelson, photographer and Mulder fan extraordinaire, will photograph the show for the Rio Gallery. Alvey says that after this all of us will go back to our own work, with a new understanding of the whole; a whole life and body of work.

“That is the story of the artist,” as The Utah Arts Council’s Lila Abersold observes, “Tom worked because he had to.”

As Mulder said in the credo, he penned upon receiving his MFA:

Painting is for me the development of myself: my world of inner desire.
It is the conscious awakening of my dreams.
A magical rite:
An act of love.
A secret language of
Black, blue, purple, white.
Red stone, orange grass, ancient earths.
Mystery.
… I think to paint, or to be involved in painting is to affirm one’s existence. Within the realms of one’s canvas, I believe that the individual can sense the total essence of his being. 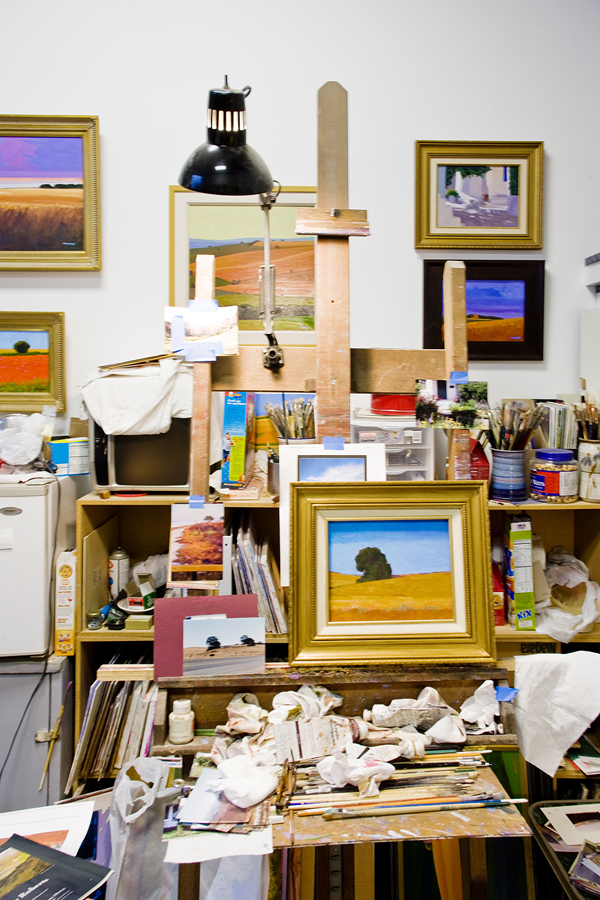 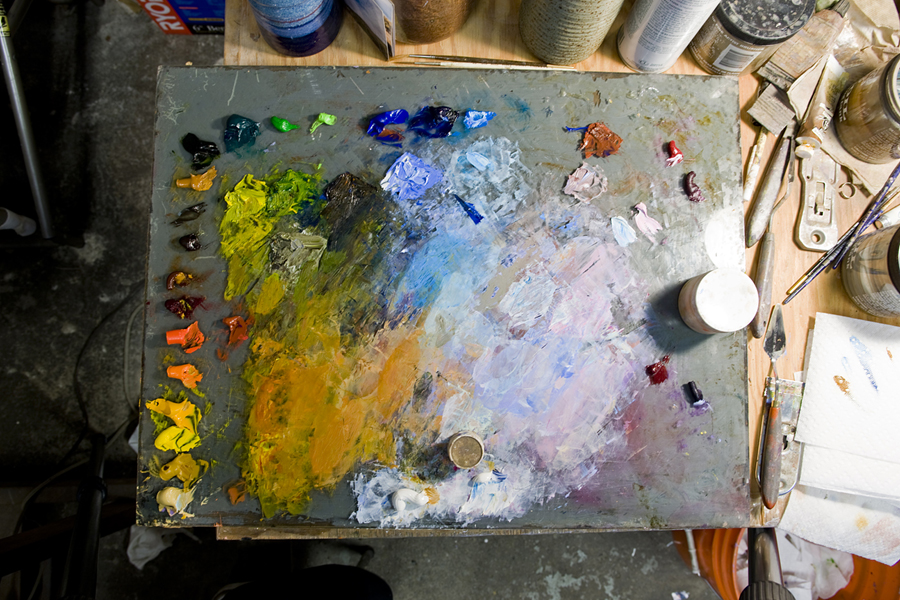 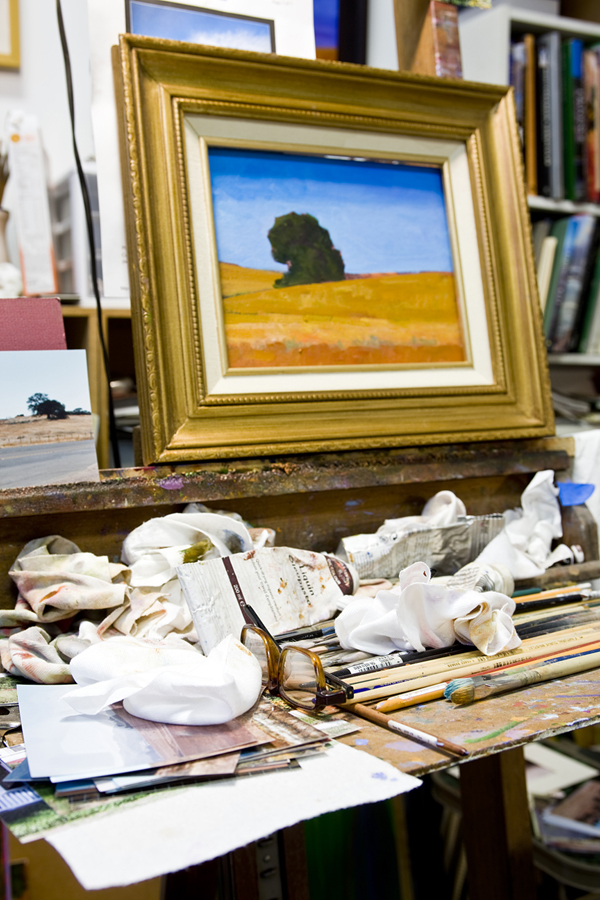 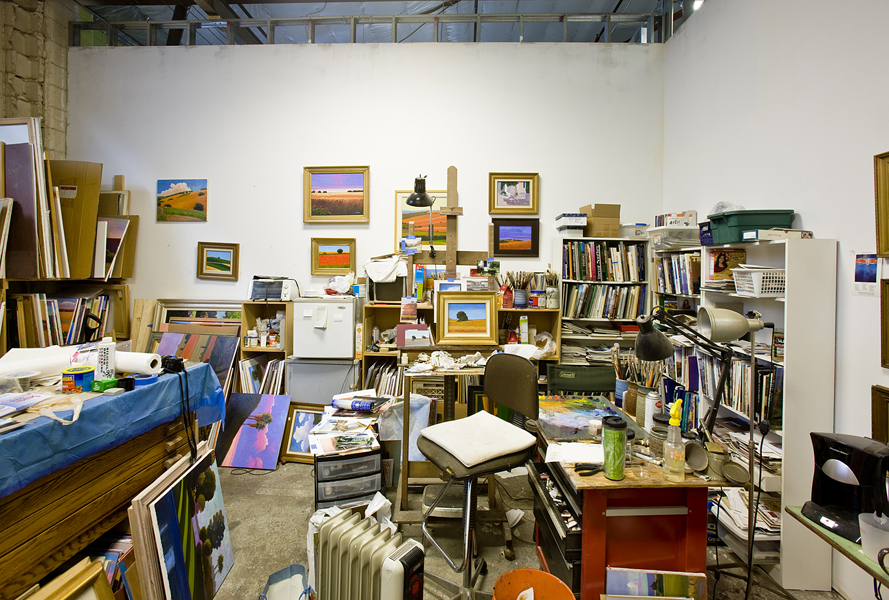 The Conscious Awakening of My Dreams: A Tom Mulder Retrospective will be on display at the Rio Gallery, January 16 through March 5, 2009 with an opening reception on Friday, January 16 from 6-9 PM