Tom Aaron: Pathways to the Land 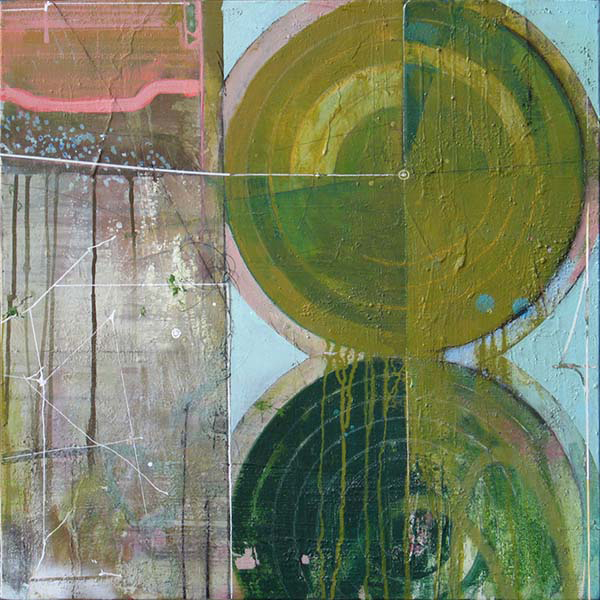 The work’s title — “UT T1S R19W” — seems like a random list of numbers and letters. But locals, who immediately clasp onto that familiar first pair of letters, may look for more clues, other patterns and meaning. T, R. S, W. Top, right, south, west? Coordinates for a map? The work itself seems to play along. A series of lines appear to be highways and roads going at random and a cloistered small town appears to the left side. Though this portion of the canvas seems to speak the language of maps, the rest is a tower of Babel: on the top left is a spray-can graffiti mark; on the bottom right turquoise paint that looks as if it has been hurled at the canvas drips freely down; the entire upper left section is black. Tom Aaron’s painting appears to be both literal and completely abstract. This sense of duality is woven throughout his work, which is driven by two loves, the language of abstract expressionism and the grandeur of the land. In Aaron’s new paintings, on view this month at Nox Contemporary, the map of the land and the artistic languages fleshed out by mid-century artists, combine to form paintings that are austere yet playful, serene yet expressive, all the while exploring the land, and our presence in it, as concept and actuality.

To the uninitiated, even a piece like “UT T12N R11W,” one of Aaron’s more conventional canvases, may cause some confusion as to what exactly is being viewed. It is landscape in every sense of the word, as it presents a mass of land and designates its features through composition and common signifiers. In this sense it is familiar, but also, with an infusion of Aaron’s expressive painterly response to the land in vibrant color and liberal gesture, alien. 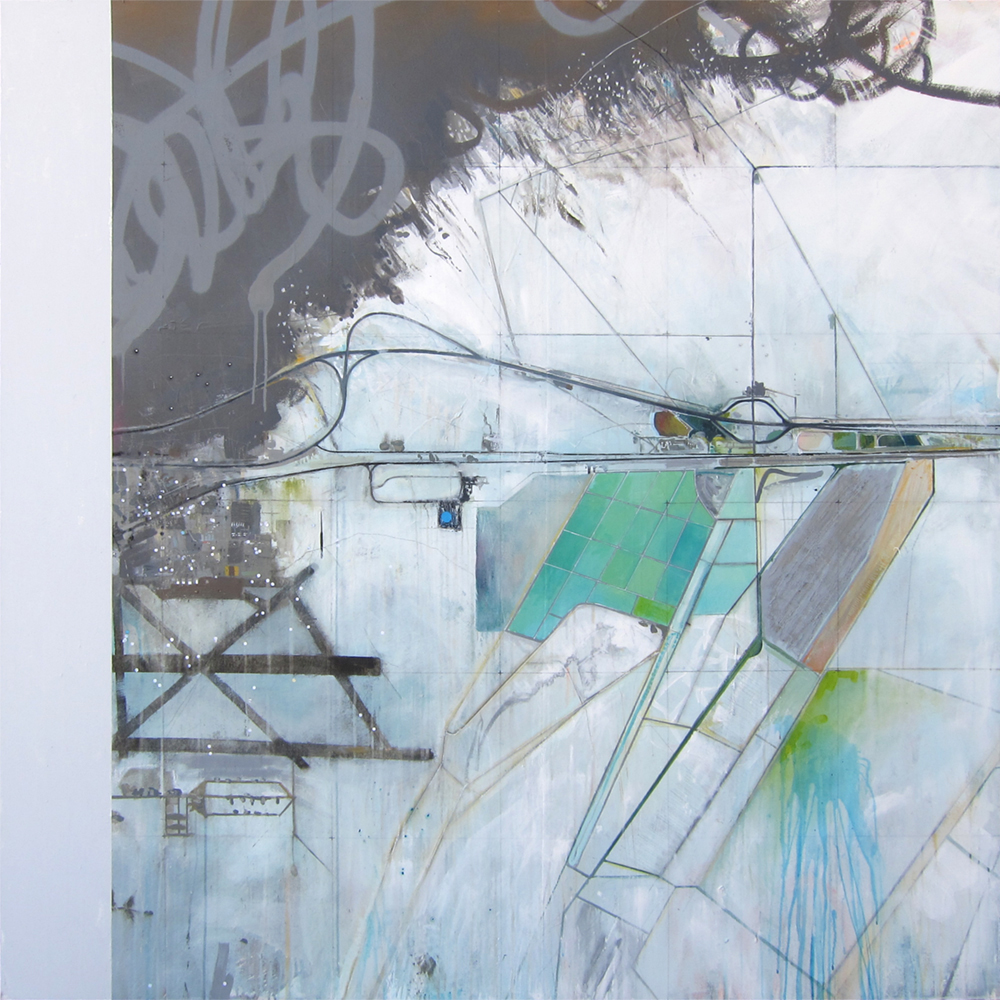 Tilted up, seen from the air, the landscape looks very much like the language of abstract expressionism: a series of marks across a flat surface. It may be just a coincidence that at a time when more and more people were able to look at the land from the air, and see it as a flattened surface with any number of arbitrary marks (seeing from an airplane the actuality of what cartographers had imagined for so many years) that painters began treating their canvases in a similar manner. That artistic language has now been with us for more than a half century. During that time technological advances have pushed our image of the land so that now satellites and computer programs combine to capture actual herds of elephants running across the savanna, or what your neighbor’s roof and yard look like on a hot summer day. Landscape is no longer regarded as simply a view, but as information.

For Aaron, whose day job is with an architectural firm, a typical horizon view simply lacks the quantity of information allowable by an aerial view. The horizontal view is too constraining. In such a view, there is a limit to which one can render information onto the canvas, even in the most abstract of landscapes. An aerial view like “UT T12N R11W” allows for a fuller mass of physical and conceptual expression. It alters both our vision of the land and our concept of it. It allows Aaron to explore questions like permanence and the human imprint upon the landscape — the juxtaposition of the old with the new. A road built a century ago but no longer used may be traversed by a principal highway that crosses the canvas. Regardless of age or size, both leave a traceable imprint that leaves a permanent fabric on the land with myriad other linear and structural elements – but only if seen from above. 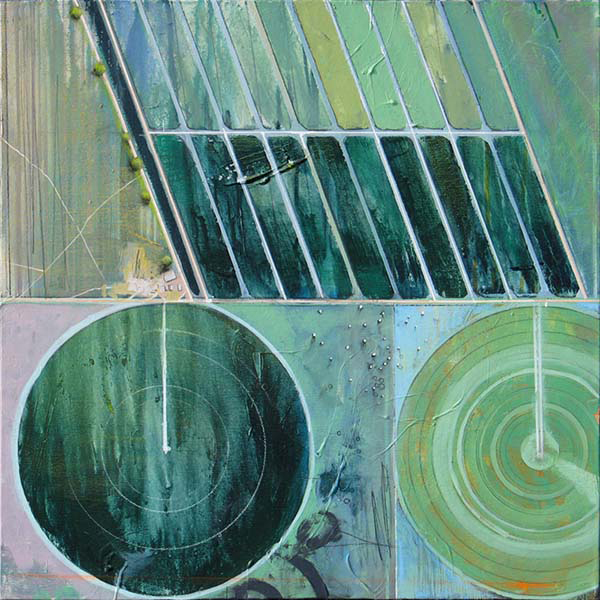 Portions of the canvas might be ascribed to what one would see out of an airplane window. Crop fields and irrigation rotation systems are visible. The form itself is taken from a literal source, with “UT T12N R11W” identifying specific coordinates on a map. However, much of the canvas, like the actual linear coordinates, are definitely not familiar from a window seat. Even in the “representational” aspects, Aaron blends the real with the artificial, the map with the territory, and the natural with the painterly.

“NV T30N R43E” is a freely rendered landscape that seems to take Aaron further down the path of abstraction. Some recognizable aspects of a mining facility are discernable, roads traversing the land in haphazard intervals. Also boldly rendered in the image are large areas of white –accumulated areas of salt. However, with a landscape that is only just recognizable as such, blurring the literal and the figurative in a region that can go either way, for both the mining area and the broad area of salt, Aaron has taken great license with abstraction and has taken color and gesture to the extreme. The blues of the tailings pond are articulated with a range of varied tones from the deepest indigo blue to rich purple, to gold and even rose pink. The entire area is expressively rendered as if to make the most aesthetically and intensely vigorous reading of the land with deep color together with airy playful strokes. Around this tailings pond the viewer finds very fine lines of roads, and further still a stark contrast between a seemingly regimented “in-between-the-lines” approach of the highways and byways and the explosion of color of the mine and the gestural strokes. The salt, which seems to have its own organic sense of being, grows amorphously along the land as it blends with other colors: blue, gold yellow, purple and green in its vast bulbous presence that dominates the canvas and threatens to engulf it! Its whiteness stands out boldly yet its varying tonalities and nebulous shape makes it something between a traditional landscape and an entirely progressive method. 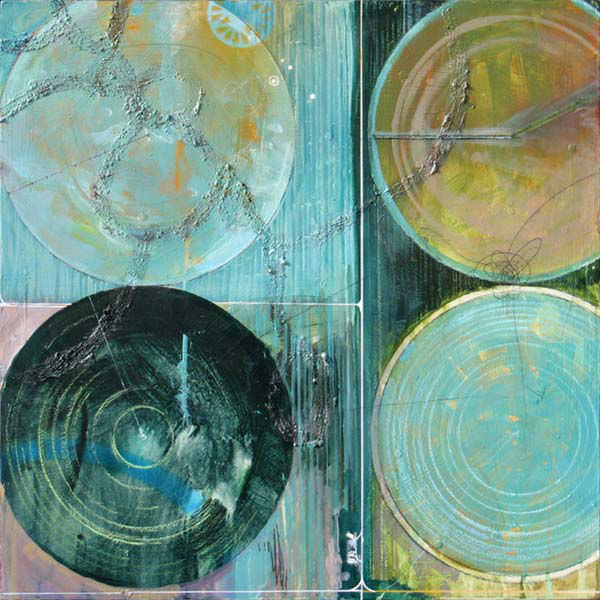 In these canvases full of manufactured landscape markings — roads, highways, towns — that have no semblance of order, contrasted with painterly expression that also lacks purpose, where is the reality of the landscape? It certainly does not lie with the highway or the old dirt roads in their ever-changing and chaotic states; it is not the town that may not be there several years from now; and it certainly is not to be found from the mania created by Aaron’s spray can or dripping turquoise paint. This is another aesthetic question Aaron likes to contemplate when he paints these landscapes . . . what is essentially real about them? One might think that it would be the land itself. But that too is ever changing and ever shifting and evolving. The only reality to be found when considering these canvases, it seems, is what is happening in the mind of the viewer, who is caught in a masterful play between abstraction and representation. 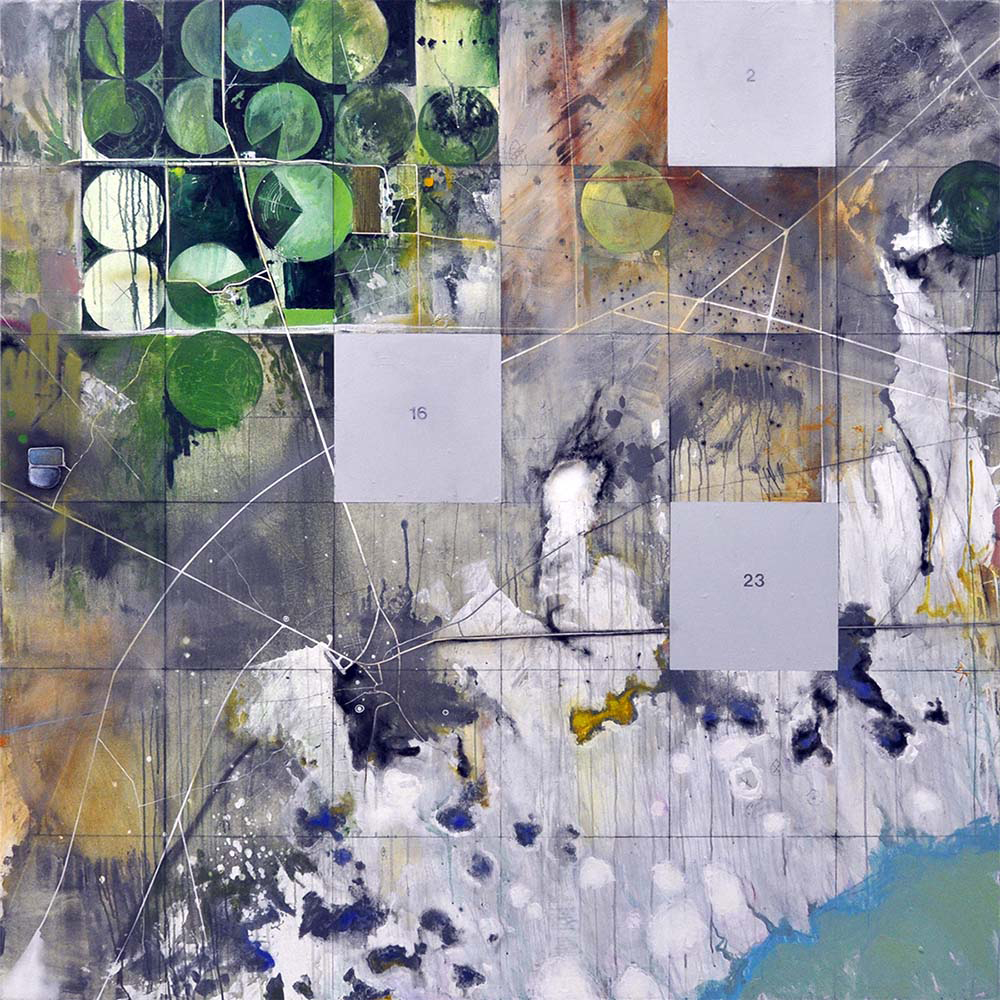 Thomas Aaron’s new works exploring abstraction and the landscape are at Nox Contemporary September 21 through November 2.