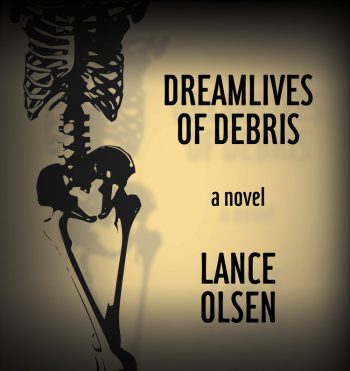 Lance Olsen’s previous novel, Theories of Forgetting ( Reviewed in 15 Bytes 4/3/2014), relates how when Robert Smithson’s earthwork Spiral Jetty is above water it is typically experienced as a simple labyrinth: visitors can’t resist walking the spiral to the center and out again. In his new book Dreamlives of Debris, Olsen takes up the theme of the labyrinth/maze once again, this time with the mythological tale of the Minotaur, the half-bull half-human child of Queen Pasiphaë, imprisoned by King Minos in a labyrinth built by the diabolical inventor Daedalus, feeding on human tributes sent by conquered Athens. An earlier version of the novel appeared in the literary journal Conjunctions as part of an issue on the theme “Exile.”

Olsen, who teaches at the University of Utah, is known as an experimental writer and this novel is not written as a linear narrative.  However, the labyrinth/maze has become such a common metaphor for postmodern fiction that Olsen risks being, dare I say, conventional by making it a theme of his writing.  He handles it cleverly, though, not only by giving the story the literal form of a maze with side passages and dead ends, but by letting the maze itself come unstuck in time.

The Minotaur in Dreamlives of Debris is female and she calls herself “Debris.” She narrates the story from a first person perspective with all the weird, horrific twists and turns of the original intact. The story emerges in fragments of monologue, each speaker introduced by a quadruple colon :::: which looks to my New-Math trained eye like a perpetual analogy with the empty set. Olsen, who thinks there are too few punctuation marks, says it represents, “what cannot be accurately articulated.” He also punctuates using double brackets [[ ]] to express “what must be removed from the chronic to be experienced.” An introduction by writer Lidia Yuknavitch describes Debris as a “beautiful disfigured girl,” but in the text Debris seems only partly human, or perhaps a better word would be post-human considering how the novel develops. She describes herself in animal terms as when she says, “My tiny ears poke up attentive as a Cretan hound’s. This is why I can hear the past and future as well as the present.” Like a wild animal, she scurries and hisses and eats people, but she is domestic enough that she likes to be petted, owns a doll named Catastrophe and talks about “Mommy” and “Daddy.” Her voice is not childlike, though. It is knowing rather than innocent.

For the first 20 or so pages, Debris is the only speaker, but she hears “screamings” and all of a sudden science fiction writer J. G. Ballard shows up and sings, “Because all clocks are labyrinths.”  The real-life source of this declaration comes from a letter Ballard wrote to artist Tacita Dean who tried and failed to find Spiral Jetty in 1998 while it was underwater. Ballard wrote, “In their way, all clocks are labyrinths and can be risky to enter.” Ballard’s short story, The Voices of Time (1960), is thought to be a major inspiration for Spiral Jetty, and Ballard believed that Smithson might have interred a clock in his earthwork while it was under construction. The next visitor from the future is Jorge Luis Borges, then Sir Arthur Evans, followed by a number of others.  There are no notes, citations or explanations to help identify these out-of-time characters, though they clearly relate to the story through the theme of the labyrinth/maze.  It’s up to the intrepid reader to make connections.

Evans, as it turns out, may be the perfect postmodern hero. In real life he was a Victorian archeologist who excavated the ruins at Knossos on the island of Crete. Inspired by Heinrich Schliemann, who linked the ancient ruins of Troy to events described in Homer’s Iliad, Evans was convinced that King Minos of myth was an actual person and that Crete had been his kingdom. He badly wanted to find evidence relating the ruins to mythology and he interpreted his archeological finds accordingly. When his discoveries didn’t quite match the story, Evans invented evidence, reconstructing the ruins of a maze-like palace out of reinforced concrete and brightly colored paint. Contemporary archaeologists are dismayed by Evans’ unscientific approach, but his faux ruins are evocative and beautiful, and they remain a major tourist attraction to this day. So in a way, Evans is the father of Minoan civilization.

With Sir Arthur Evans as a muse, the themes of the novel fall into place. On the first page, Debris has introduced herself saying, “I have my doll and the screamings behind my eyes. The screamings look like fluttery lights. They believe they live inside me.  I live inside them too.” It is a particularly apt introduction for what follows. The Minotaur, exiled in the maze and stuck in a particular narrative thread (think Ariadne), heads toward inevitable destruction at the hand of Theseus. We all know the story.  But even as she approaches her own end, the Minotaur leaves behind a trail of debris, sherds of mythology and archeological ruins that can be rediscovered and reconstituted into new stories. With each new interpretation, the ever-shifting Minotaur lives again, and his/her maze branches into newly confounding passages to baffle those who enter.