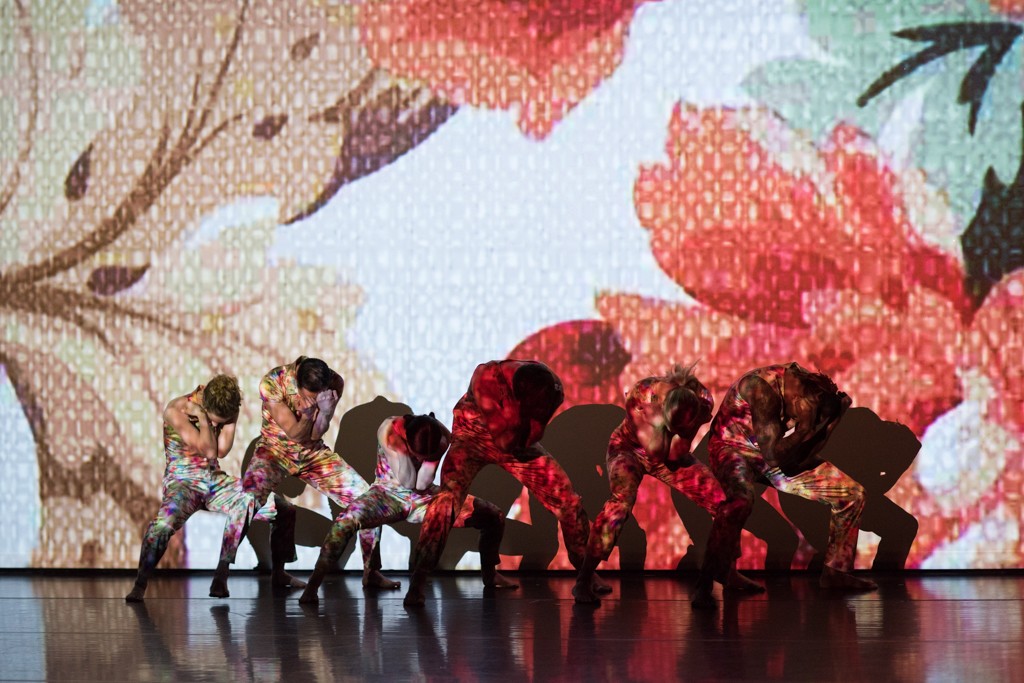 The Ririe-Woodbury cast in Joanna Kotze’s “Star Mark.” Photo by Will Thompson.

In the intimate space of the LeonaWagner Black Box Theater, Ririe Woodbury opened Spring Season with two premieres and one reconstructed work, concluding the company’s annual season with a show that is as virtuosic as it is contemplative.

Joanna Kotze’s commission, “Star Mark,” begins with increasingly rapid projections of floral prints. With dancers clad in matching floral costumes by Eugene Tacchini, “Star Mark” calls to mind a work by John Jasperse, another fairly recent contributor to the company’s repertory. Although the two dances are different in a host of ways, both use the idea of matching prints to, at once, disguise and highlight the moving body. After performing inside the projection, the black traveler rolls in, clearing the space of colorful imagery. The audience is left to reckon with the dancers themselves, interrogating their movement without a shroud of external ideas.

A program note suggests that the dance highlights performance as a multifaceted role using a daily process which includes “investigating a person.” At times the thoroughness of this choreographic investigation pays off: Bashaun Williams making an exacting diagonal pass, performers trading momentary comic pas de deux, Melissa Younker ending the piece with a slice of her arms before disappearing into black. But at the end, the audience still sees only slivers of this wholeness, as they do in any other dance.

A reconstruction of Ann Carlson’s “50 Years” gets at how these small slivers of knowing change over time. The dance is a chorus of base instincts. Wearing dirty, wet, dusty red rompers, the ensemble repeats an imagined chant while rolling through various states: fear, ecstasy and hesitance, among others. 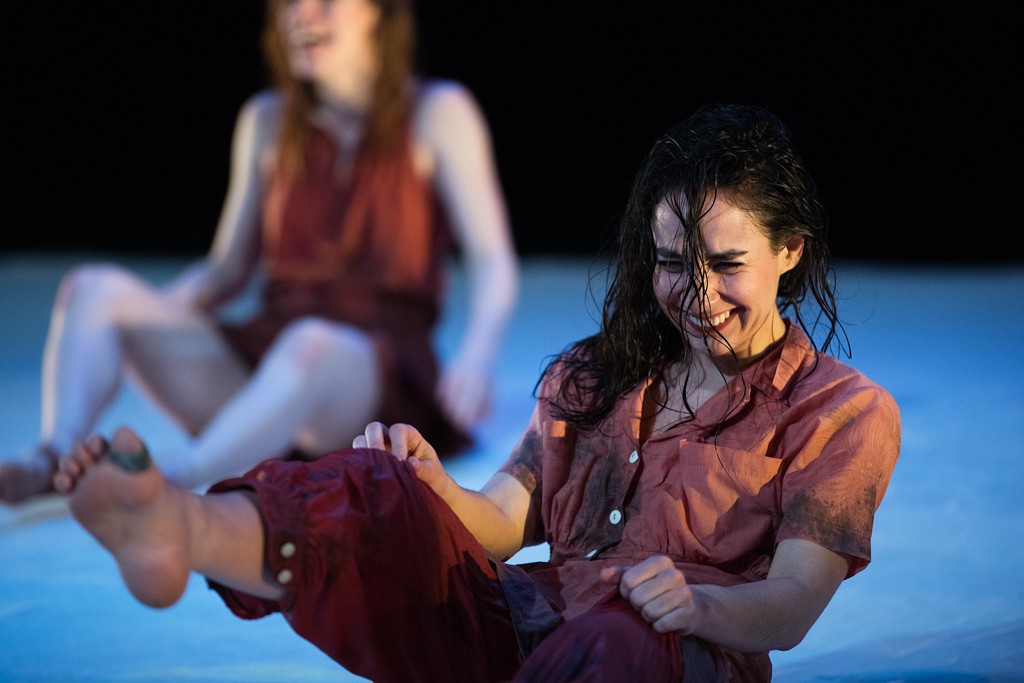 It was my third viewing of “50 Years,” which was made as a celebration of Utah’s Bicentennial in 1996. Last night, Amy Falls and I sat together debating: Who was in the cast we saw several years ago? Was that magnificent tree from Shirley Ririe’s yard always downstage left? Wasn’t it a set of light bulbs instead?

Our miniature debate speaks to how “50 Years” functions not just as a series of shifting choreographic choices but also as a reflection on the possibilities within the embodiment of social histories. In this iteration, dancers appeared frightful and adoring of the aforementioned tree. In past iterations those same impressions floated more ethereally. Both choices reflect ancient ideologies of hope and consternation in different ways.

The concert concluded with “Enter,” a world premiere by Artistic Director Daniel Charon and the second installment of his developing trilogy “Together Alone.” While the first portion of the trilogy presented a didactic representation of digital life, “Enter” is largely absent of such an approach, opting instead to explore the concept of dancers continuing to move through the idea of a “metaverse,” a collective virtual space. While the idea of “metaverse” is relatively new, dance has always lived between the real and the representational.

In front of geometric projections created by Charon (cycling lines, a minimalist clock, a grid) the cast performs alongside an evolving sound score mixed live by Michael Wall. There is something engaging about the stark repetition of the imagery and the unpredictable nature of how dancers can find momentum in space. The music augments this sensation by adding information to both what is actual (a human voice) and what requires envisioning (unidentified ambient soundscapes).

The work ends with sounds emerging more and more clearly, like waves rolling on a beach, while Bradley Beakes (who is leaving the company at the conclusion of Spring Season) dances with Yebel Gallegos. They are genuinely there but the beach is not. They are genuinely moving together but are also only a sketch or an illusion of who they, in fact, are. Their togetherness is a physical fact, but the success of the piece also relies on our hope that it might be so. 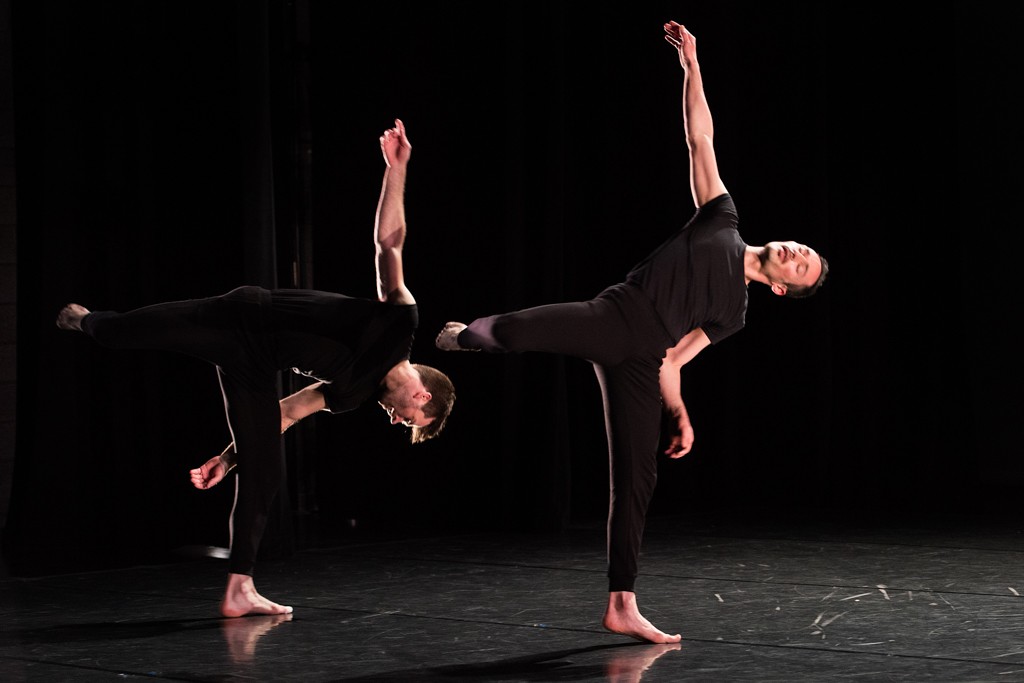 This article published in collaboration with loveDANCEmore.org.