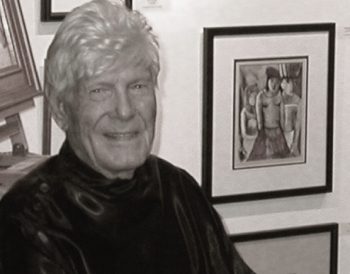 “I have lived to bridge the two worlds of the horse and buggy and the automobile,” Ted told me during an interview for The Salt Lake Tribune in March, 1994. “I drove a buggy as a young boy until my dad bought a car in 1916. He continued to drive until his mid-8os.”

It is not only buggies and cars that Ted has driven. “All my life,” he said, “there has been a drive to experiment, a drive to express, a drive to work out frustrations, or some concept that I have to get out.”

He also was driven to work — as a husband, artist, collector, and for 17 years, “sitting behind a desk doing accounting so I could afford the luxury of being a painter.” 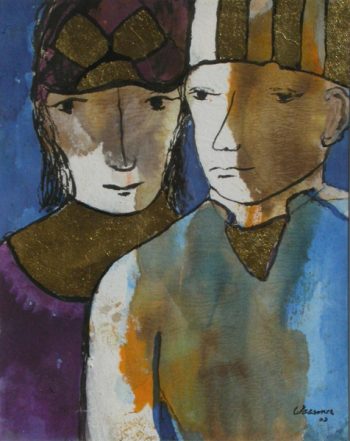 Ted said he first wanted to become an artist when he observed Frank Zimbeaux, father of Francis, selling his paintings in front of the old Salt Lake Theatre. Seeing Duchamp’s “Nude Descending a Staircase” on a visit to the 1934 Chicago World’s Fair cemented that aspiration. Ted returned to Salt Lake City and began holding a series of “soirees” at his “bachelor digs” — a small apartment on the Avenues dominated by his grand piano.

Even more important than his art, being a husband was “an enormous factor in making Ted what he was,” according to his friend, Ann Poore. His wife, Judy Farnsworth Lund (1911-1996), was “amazing in her own right.” And, if you wanted to stay on Ted’s good side, you needed to acknowledge Judy’s legacy.

Judy was a distinguished executive and community leader, as well as an accomplished painter. She was the first student to receive a Master’s Degree in art from the University of Utah. She promoted artists’ work and Utah’s cultural development in many capacities, including serving as the executive secretary of what is now the Utah Arts Council. As the director of the Federal Emergency Relief Administration (FERA), and later as the director of the Utah artist’s project for the Works Progress Administration (WPA), she “kept artists and their families from starving during the Great Depression of the 1930s,” according to Ted’s obituary. One of her many accomplishments as the FERA director was completion of the murals in the State Capitol Rotunda in 1935, now under restoration with the rest of the building. 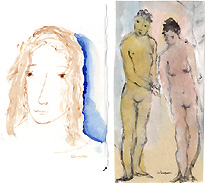 Again, Ted’s obituary reveals how Judy was an influence and formidable companion for Ted. They married in New York City and “studied four years at the Art Students’ League…They spent long days together in city museums copying the work of master painters to develop their expertise and also painted portraits in their Carnegie Hall studio for two years before moving to the art community of Woodstock, N.Y., where they not only painted and exhibited, but purchased and traded art for the next 33 years…”

Ted and Judy funded most of their extensive travels through sales of their paintings. Their most fertile commercial opportunities were in Salt Lake City, especially through exhibits in the ZCMI Tiffin Room, where Ted had his first showings as a budding talent in the Alice Merrill Horne Gallery. Ted would later say that he “started with Alice and ended with Karen.” Karen is Alice’s great-granddaughter, a painter and proprietor of Horne Fine Art, the gallery where Ted directed most of his work in his final years. Alice, elected in 1898 as the second female member of the Utah House of Representatives, was the driving force in the formation of what is now called the Utah Arts Council, the first legislatively mandated state arts agency in the country. 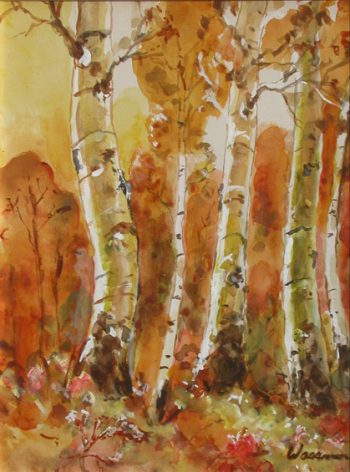 In 1985, the Wassmers returned to Utah for good. They gradually donated their collection of over 1,500 works of art and sculpture to seven major Utah art museums, along with 1,700 volumes of art and literature.

Wassmer often stressed the importance of good health, swimming “every day” and keeping “active in the arts.” Until the last few months of his life, he painted nearly every day. Collectors visited his studio regularly. “They think this old man is going to die and they should get my work for cheap while I’m still making it.” He said such visits gave him, “a good feeling knowing people want my work.”

Wassmer didn’t use models for his figurative paintings of dancers, mimes, actors, and street festival characters. “Before I start,” he said, “I just throw some paint at the thing and what evolves, evolves. I can’t explain how it works. I get rid of something in me that has to be expressed.” He also used this process for his abstract paintings and watercolors.

His work revealed itself as the colors began to flow.

“Hell’s fire!” he exclaimed, “You can’t explain art anyway. With me, it just evolves. My pieces are not all good and many are worthless. But some succeed; some come out with a semblance of art, a sense of mystery.”

At the end of our interview, Wassmer bragged that he had outlived five Salt Lake Tribune art critics. That meeting in his condominium near the University of Utah was the beginning of a twelve-year friendship. Our time together was spent with occasional lunches at close-by restaurants, previews of his new paintings, and howdy-dos at art openings where he sported his silver toupee and very short white shorts. 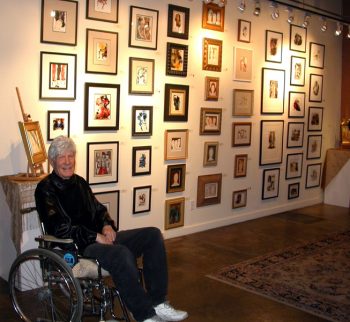 Wassmer’s 70-year art career, generous philanthropy, and prolific letter writing (he sent me a letter about every month or so for the past dozen years, several included drawings and watercolors) came to an end a week after Thanksgiving on November 26, 2006. He was 96.