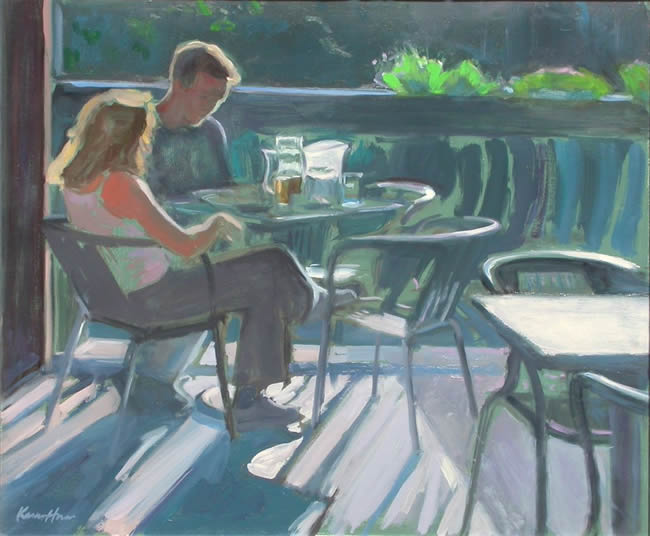 The Rio Gallery at the Rio Grande Depot exists within a huge cavernous space. One might wonder how it could possibly be used as a successful gallery. However, the staff of the Utah Arts Council Visual Arts Program somehow manages to hang very successful fine art exhibits in the space. Glen Richards and Laura Durham have it down to a combination of science and aesthetics. “It’s a little overwhelming, but the challenge is fun. I like that we can move the walls around and make each show look different. It keeps things fresh. I’m warming up to the grandeur of the space after being used to the intimate and more controlled environment we had last year”, reveals Laura Durham, Visual Arts Program Assistant.

The current exhibit, Utah Arts Council 2004-2005 Fellowship Recipient Exhibit, is no exception. It is indeed a very handsome exhibit, and has a sense of intimacy, regardless of the high ceiling.

One enters the exhibit space through vestibules with normal ceiling heights.
Then, WHAM, the lid flies off the box, and you enter the grand hall with its expansive volume and ornate, turn-of-the-century decoration.

The exhibit is hung on moveable walls, which are actually four sided rectangles on casters. The walls are positioned over electrical outlets in the floor, which provide power for the lights mounted to the top of the walls. This provides for a neat solution to a natty problem. “It’s real tricky lifting the lids on the walls, reaching for the lamps, reaching to plug them in inside the top of the wall and adjusting them – all the while balancing on a not real stable ladder”, Laura Durham.

The four artists exhibited are the 2004 and 2005 Fellowship award recipients. Two artists are selected each year. “This is the first time we decided to make it a biannual show’, said Durham. “Instead of just featuring the 2005 winners, we featured the winners from 2004 as well, in order to better fill up the large exhibit space. Two artists would have been too few. The next Fellowship show will be in 2007”.

The UAC Fellowship award is one of the most prestigious and coveted awards an artist living and working in Utah can achieve. The Visual Arts Fellowship Program Mission Statement reads, “The purpose of this program is to provide support for professional artists of exceptional talent and demonstrated ability in their process of aesthetic investigation and creation of original works of art.”

It is clear from the first glimpse of the exhibit that the artists selected fit the qualifications of the mission statement. They are all first rate.

There is something wonderful about a fine art painting. It exudes a magnetic presence and has a certain quality of exceptional fineness. An exhibit of fine art becomes larger than the individual pieces and takes on a life and aesthetic of its own. This exhibit is one the viewer can become easily immersed in. It is difficult to quickly view the show and leave. One is seemingly compelled by the works to take time and study them individually and come to a personal understanding of their intent and message. Then the exhibit itself impels the viewer to enjoy the ambiance of the collected works and perceive how they are intended to relate to each other and the gallery setting. 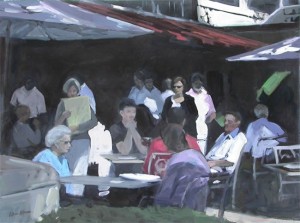 Karen Horne’s paintings reflect her attraction to the colors and action of outdoor dining scenes. “These works reflect my ongoing fascination with restaurants, a theme I’ve been painting since 1984,” explains Horne. “As a painter, I found the interplay between diners and setting very intriguing. I still think of restaurants as a theatre set, with constantly shifting visual drama.”

Juror Mario Naves says of Horne’s paintings, “Horne takes inspiration from observed phenomenon, fixing in oil paint the moments of solace that only leisure can afford. She is in the thrall of oil paint, employing it with gusto.”

Indeed, it is very evident that Horne loves paint and the act of painting. There is nothing else quite like a well-controlled, thick impasto of paint. This is juicy paint, saturated with color, rapidly applied with a very practiced surety, and capturing the fleeting actions of the moment. 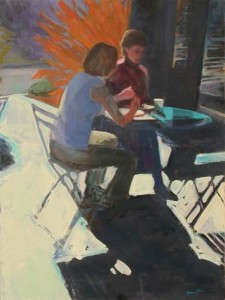 Somehow Horne manages to take these familiar, everyday settings and impart a greater sense of importance and purpose. The figures animate the scenes even as they are at ease. The texture the paint provides to the surface of the canvases enlivens the paintings and imparts a sense of action. Another important aspect is the accuracy of the draftsmanship and her practiced ability to draw human anatomy. “Many years of sketching – on NYC subways, in café’s and in formal life drawing sessions – have helped me to observe and record gesture. My goal is to distill the moment with a few decisive marks,” says Horne.

Horne’s major achievement with these works is, as she states, “to recapture the vivid parade of life”.

Steven Larson’s paintings fit well with Horne’s, as well as the other fellowship recipients. He also has a painterly approach and technique. His subject matter, while metropolitan, does not contain any human figures. Instead, the action is created through the suggestion of the passage of time and ever changing light levels. The city scenes rendered by Larson appear to be in a state of constant flux. There is a strong sense of the emotional attachment the artist has for these urban scenes and man made environments and objects.

“In the event of painting, layers are built up and torn down. Exploring the many ways paint can be applied to a surface sustains my motivation to make art. Often I paint without the use of reference material. Working from imagination allows a certain freedom yet presents a unique challenge,” Larson stated regarding his work. 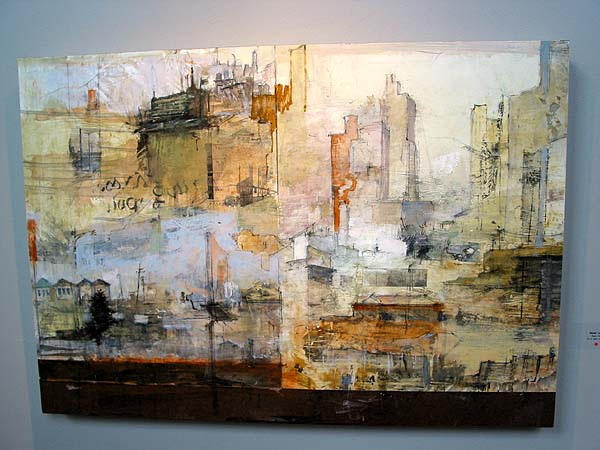 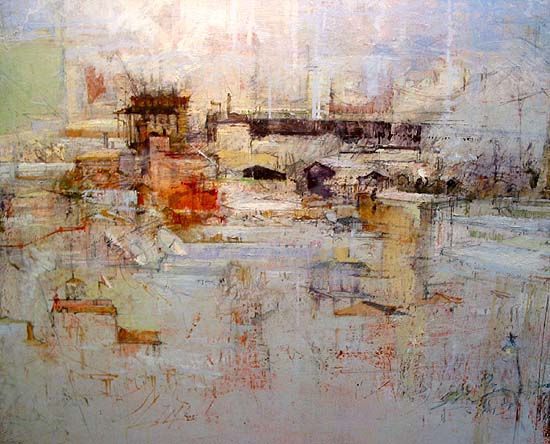 These paintings also have that certain something that says “fine art,” and exude intrinsic value and desirability. The paintings would be easy to live with, even though there is a hint of melancholy, and an expression of the impermanent aspects of mortality. The colors used are soothing and gentle, which provides a sense of the protection habitable structures provide from the natural elements. The sketchy quality of the paintings is also very attractive and offers a feeling of distant familiarity. 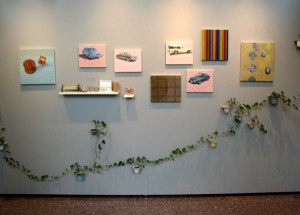 Madison N. Smith is displaying 31 pieces, including an installation alcove complete with three-dimensional models of the objects in the paintings and little containers with ivy. The ivy forms a thread that visually connects the pieces together and also forms a time line representing growth and change. This reinforces the aspect of memory and the past events portrayed in the works.

The paintings render the familiar and often mundane objects and events of normal everyday life. Automobiles, furniture, fabric swatches and people are depicted with a very tight and controlled technique. There is a sense of nostalgia associated with these works. Smith says of the paintings, “Certain objects, colors and patterns trigger feelings and memories that have changed over time and when placed together, become threads in a larger personal tapestry.” 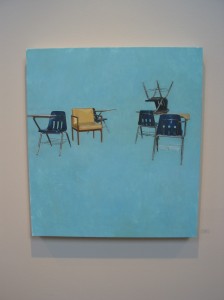 Smith uses thin and very smoothly applied paint, which contributes to the clarity of the photo-journalistic approach. It is the juxtaposition of forms, rearranged in non-ordinary configurations, which gives the paintings their sense of being composed from memories. |7| There is a hint of dream state as well. Dreams often provide images that change and morph over time, much like memory provides selective images. “In a way, I am constructing something new out of old parts,” stated Smith.

Paul Stout is a sculptor, and object maker. Sculpture professor Richard Johnston once said, “Sculptors can make anything.” Stout seems to be a proponent of that belief. He invents new objects from familiar parts, and like Smith, constructs new out of old. 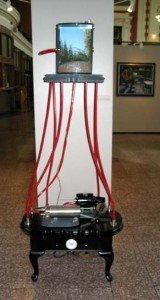 In “The Breath of Life Stripped of its Breadth,” Stout has constructed a machine out of found parts to pump air through a series of tubes to a case with a nature scene and blades of grass which are blown by the puffs of compressed air. The “natural” environment is, in essence, being manipulated by man’s inventions.

“The focus of my work in the past several years has been and remains concerned with this lineage, the interaction of technology, nature and culture, and how we as a society use tangible technological explanations to describe the natural world.”

Three other “machines” are included in the exhibit. “Second Nature” is a machine that raises and lowers a black metal “mast”. Like “Breath of Life”, this machine sits upon a black lacquer table, providing a juxtaposition of the antique with the modern. The antique represents a time before the advance of technology became so dominant and controlling of culture and the environment.

“Reconceived Nature” is a machine that raises and lowers bird wings, and turns a paper cylinder that has hand drawn nature scenes, seen by looking through little glass view ports. |10| Again, this is a representation of man’s ever widening control over nature. In “Untitled, From the New American Landscape Series”, Stout again uses a machine to manipulate a dead butterfly’s wings. The butterfly is contained, like “Reconceived Nature” in a glass bell jar.

The other two Stout works deviate from the machine-manipulated format, and instead rely on a more cerebral than mechanized approach. “Squirrel Death Masks” consists of three plastic squirrel head castings placed in an antique wood and glass specimen display case. Presumably, this is what people could experience of squirrels in the not too distant future.

Two separate rows of colored plaques comprise “The 20 States of Desire, The Postures of Deer, Antelope and Goat Nostrils from Ennui to Ecstasy.” These are plastic castings of animal snouts mounted like trophies on machine carved wooden plaques. This clever piece seems to deviate from Stout’s usual nature controlled or manipulated by man, theme and instead references perhaps man’s baser animalistic nature. 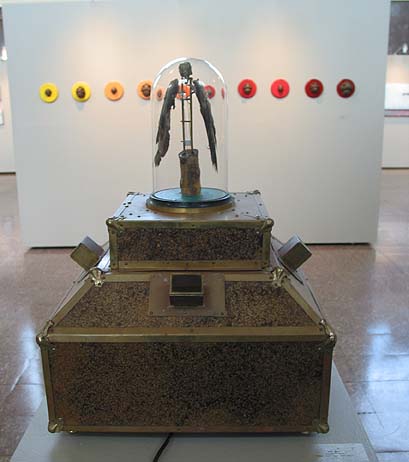 In all, the Fellowship Recipient Exhibition is engaging, inspiring and entertaining, while providing a strong sense of aesthetic cohesiveness. Kudos to the Utah Arts Council for another very successful exhibit and program. Congratulations to the Fellowship recipients.

The Utah Arts Council Fellowship Recipients Exhibitions continues through the end of October. The Utah Arts Council’s Board has approved an increase in the Fellowship award money. Beginning 2006, the UAC Visual Arts Program will award two $10,000 Fellowships annually. Guidelines for the next Fellowsihp award will be available in May 2006.