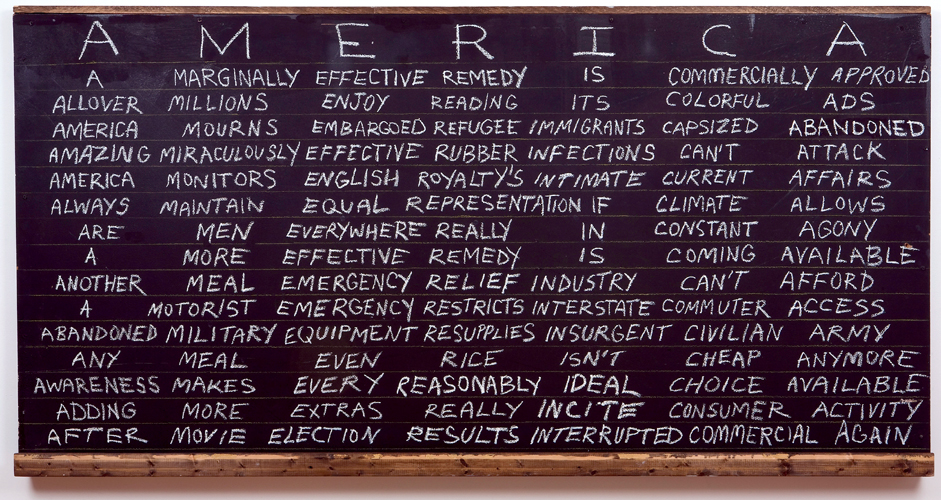 Willie Cole, How Do You Spell America? #8, 1993, oilstick, chalk and latex on masonite and wood, purchased with funds from the UMFA Young Benefactors, 2007.19.1

While organizations that choose for titles expressing youth or contemporaneity benefit from the energy evoked by their name, time has a way of catching up to them and complicating their brand. When the Museum of Modern Art in New York was dubbed, its founders surely thought the title would call to mind the cutting-edge work they intended to show. But just go down to BYU Museum of Art’s exhibit Turning Point and you’ll find that Modernism is not, well, modern; it’s old-fashioned. And give it a decade or so and pretty soon Contemporary will mean ancient history. And when twelve relatively young Utah art enthusiasts started a new organization in 2004 and called it the Young Benefactors, they probably didn’t realize it would soon swell to over 100 members, some of whom are more youthful than young.

“The Young Benefactors is a group dedicated to building the contemporary art collection at the Utah Museum of Fine Arts,” explains the organization’s chair, Jonathan Freeman. Generally the members, who come from a variety of backgrounds including working professionals, artists, and academics, are younger individuals or couples interested in beginning their own art collection. But as the organization has grown, some gray hair has made its appearance, leading one to understand that more than a matter of age, the “young” in the group’s title is a state of mind.

The group’s specific age demographic is not as important to its success as is the camaraderie enjoyed by its members. The group enjoys learning from artists, museum staff, established collectors and each other as they attend their regularly scheduled events and tours. “I feel fortunate to be a part of a group that shares the same passion I do in moving the contemporary concerns of art forward into the culture in Utah, where I think it’s much needed,” says Young Benefactors member and local artist Emily Plewe.

Members pay annual dues of $100, for participating members, or $250, for voting members, and use the sum to acquire a new piece of art for the UMFA. Members of the Young Benefactors Council work directly with Jill Dawsey, UMFA Curator of Modern and Contemporary Art, to recommend and select artworks for this annual acquisition process. Young Benefactors Council members cast their vote for the work that will be acquired at the annual acquisition dinner, a black-tie event.

This year’s annual acquisition dinner will take place on Friday, November 7. Willie Cole, whose work, “How Do You Spell America, #8,” was purchased this year, will attend as the guest of honor, and the Benefactors will vote on their next purchase. Artists under consideration for the 2008 acquisition include: Edgar Arceneaux, Trevor Paglen and Amy Sillman. To date, the Young Benefactors have added works by Suling Wang, John O’Connell and Wolf Kahn, and Willie Cole to the UMFA’s permanent collection.

Jill Dawsey notes that “How Do You Spell America, #8,” a chalkboard where the artist writes a series of evocative sentences using the letters A-M-E-R-I-C-A as each word’s initial letter, is exemplary of Cole’s best work — “which frequently incorporates found objects and commonplace materials, transforming them in innovative and evocative ways.” The choice of Cole came about last year because the Young Benefactors were working with the theme of “landscape” and felt Cole’s work offered a unique vision of the American landscape. “It does not depict the American landscape literally, but instead conjures it up through word play and associations,” comments Dawsey. The work was made in the early 1990s, in the wake of the first Gulf War. Plewe says “[Cole’s] work exemplifies how good contemporary art can be — it is deeply thought out, it hits on something universal about humanity, society, or the individual, it raises questions, it provokes thought and dialogue, and it is visually well-executed.”

The UMFA will host Willie Cole for his first visit to Utah on November 6 and 7. Cole will participate in a private unveiling of “How Do You Spell America? #8″ for the Young Benefactors in the UMFA lobby on November 6, followed by a free public lecture in the Dumke Auditorium at 6:30 p.m. During his visit Mr. Cole will also teach a special workshop for graduate students in the U of U’s Art and Art History Department.”

All fellow contemporary art lovers interested in becoming part of the next generation of UMFA supporters are welcome to join. Contact Jessica Peterson at jessica.peterson@umfa.utah.edu