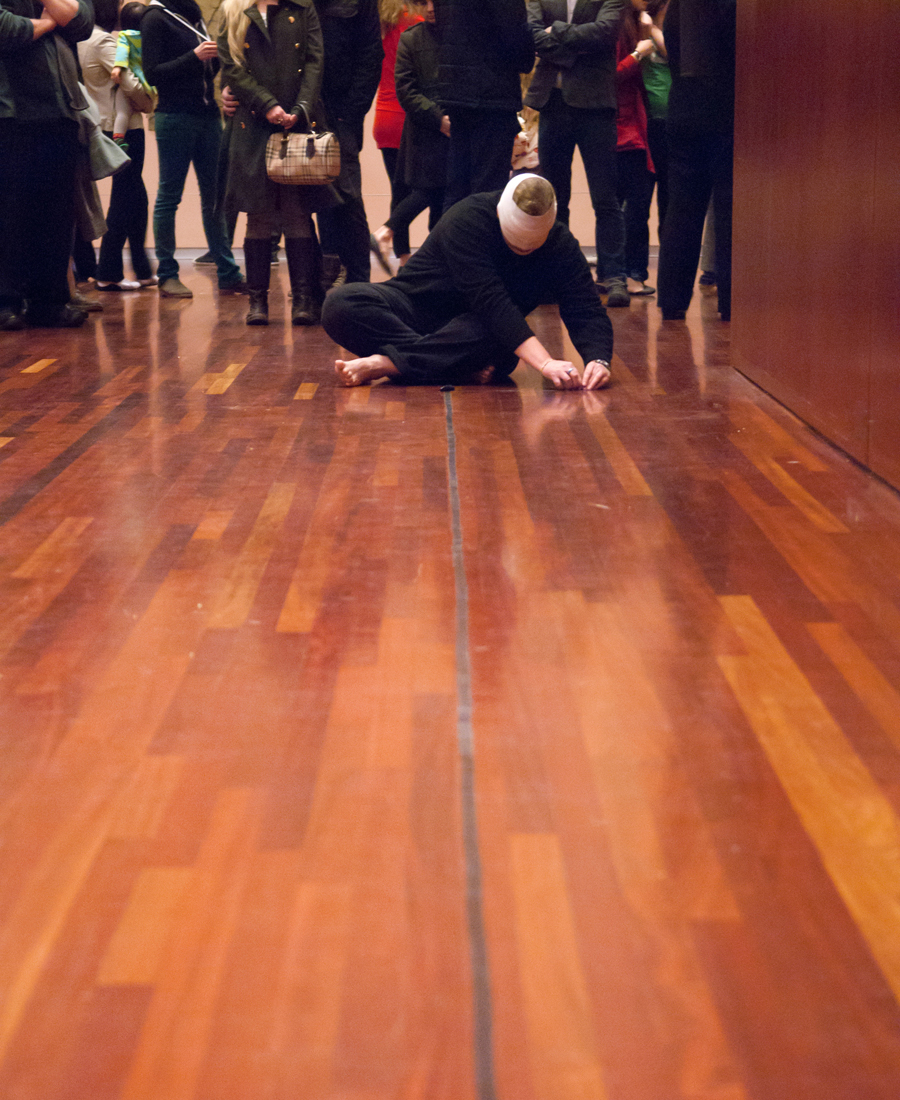 If an art exhibition is any indication of the state of things then much can be learned from the UMFA Faculty Show. T.S. Eliot once predicted that decline would be signaled ‘not with a bang but a whimper.’ Certainly there are works in this show that speak to that sentiment. Overly moralizing, programmatic or simply unresolved, some employ such a comprehensive symbology they are impossible to decipher. Yet most of the works on view display a higher caliber of work, and do so not with a whimper but a bang.

Kristina Lenzi’s performance “Expel” did just that. Donning a blindfold, the artist laboriously scraped a line of museum tape from the floor, rolling it up into a wad of black rubber, which became a black balloon. Lenzi has a knack for using simple, playful props in zen-like ways, and “Expel “ was no exception. The more she blew, the more distracted I became by the crowd, schmoozing loudly and noshing on their crudités. Lenzi’s action however drew them in, as they became ensnared by the battle between her lungs and the balloon’s elasticity. 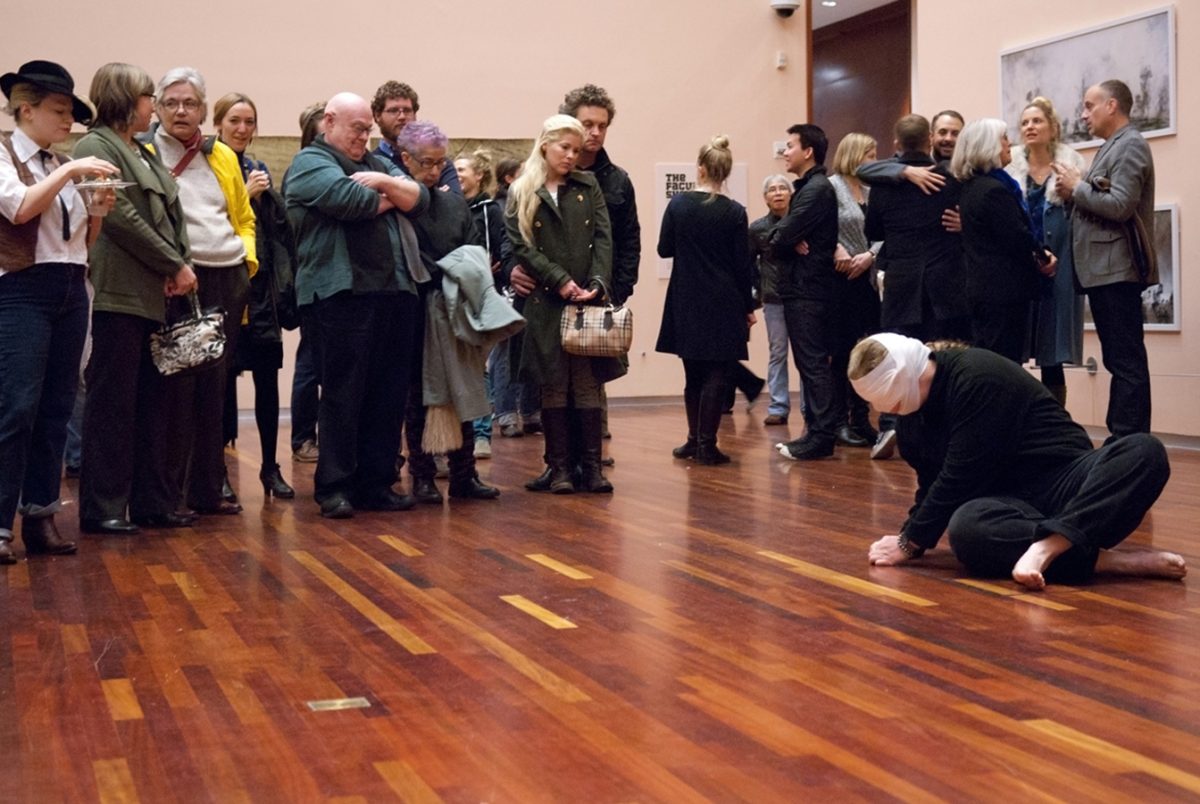 I have often wondered how to overcome the grandiose space of the UMFA’s Great Hall. Hang one of Claes Oldenburg’s Shuttlecocks over the balcony? Fill the room with Alexander Calder mobiles? Lenzi met this challenge head on, and not spatially but audibly. Swollen beyond capacity, the balloon blast released and shot through the Great Hall like no other. The Faculty Show had opened: not with a whimper, but a !Bang!

Today, works in sculpture, photography and paint continue to inspire conversation and reflection. Tom Hoffman’s Autobiography features twelve life-sized portraits hung horizontally and framed tightly to the face. Of varying ages and races, the faces smile faintly or remain neutral. Some are recognizable as members of the faculty, others are unknown. Nestled among them is the back of the artist’s head. This posture suggests his refusal to participate or to play by the rules. It also gives a nod to Gerhard Richter’s iconic 1988 painting “Betty.” We are left to define the painter not by his face, but by the people in his circle. Most remarkable is his verisimilitude; I suspect even van Eyck would approve. 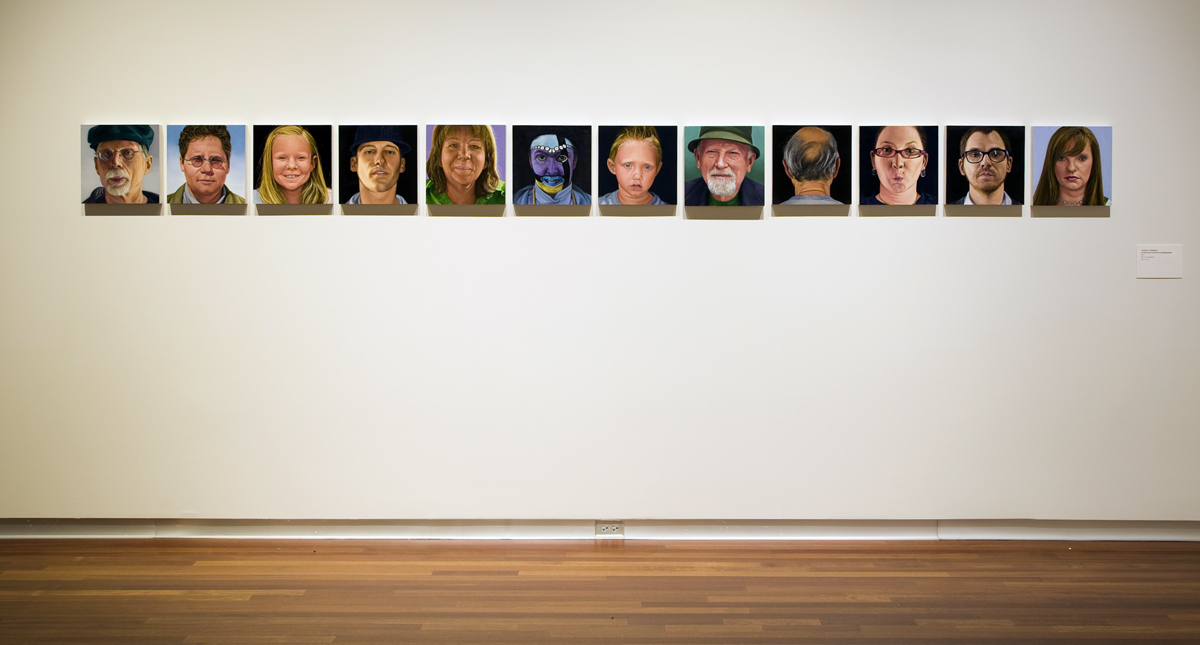 Thomas S. Hoffman, A Face in the Crowd; An Autobiography, 2011, Oil on canvas/panel, photo Courtesy the UMFA, University of Utah

Hoffman’s realism is contrasted with a number of artists employing more apocalyptic vocabularies. Paintings by Lenka Konopasek explore the moment of impact when industrial equipment is obliterated by disaster, as was the case in the Gulf oil spill. Details of the event are enveloped by dusty debris, mushrooming smoke and violent firestorms, resulting in a confluence of obfuscations. In this way, the work is not unlike works by William Turner, where the horizon is swallowed up by the effects of light. Indeed, glimmers of any natural light are rendered in a sulfuric palette, which in turn is refracted into shards of luminosity. 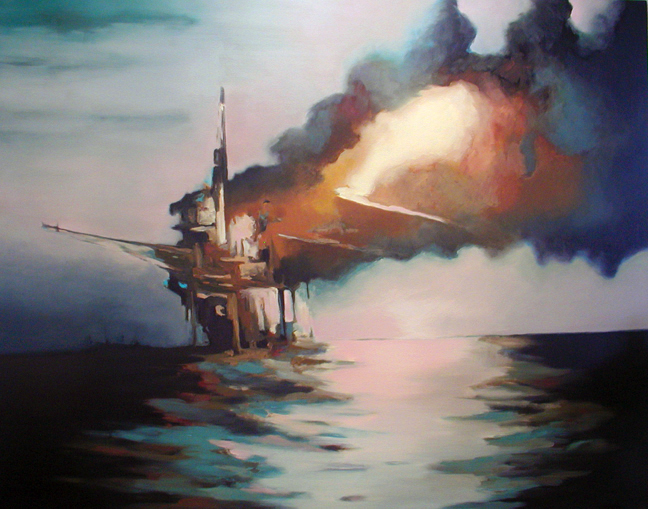 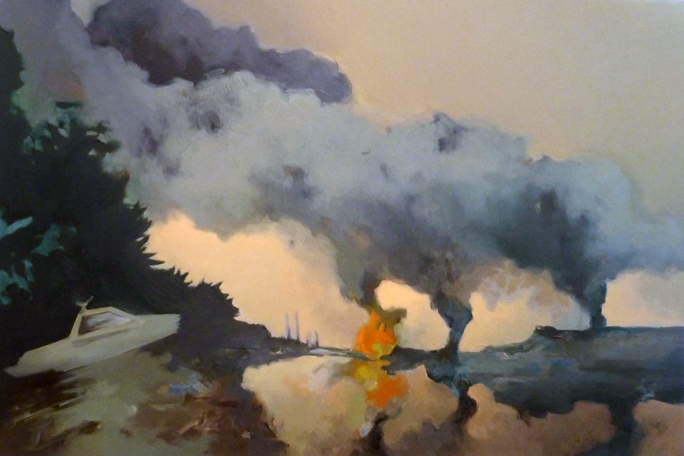 The panels of Maureen O’Hare Ure contain a similar ochre sky. Below, surface sludge is depicted with drippy watermarks and washes, fine graphite traces, sanded planes and perhaps even encaustic. The subject matter is an antediluvian world, infused with medieval references: “Deluge” features ancient sea creatures similar to those in Jan Brueghel’s “Jonah Leaving the Whale;” “Beast” references the medieval manticore. The largest of the works, “Smoke” shows an uninhabited landscape dotted with tiny volcanoes. Fires flare up, rocks sizzle and mud gurgles forming geological layers. So hostile is this environment, we could very well be looking at Tolkien’s Mordor. Yet an abundance of curlicues and arabesques wind their way through the chthon, creating further layers of reality. 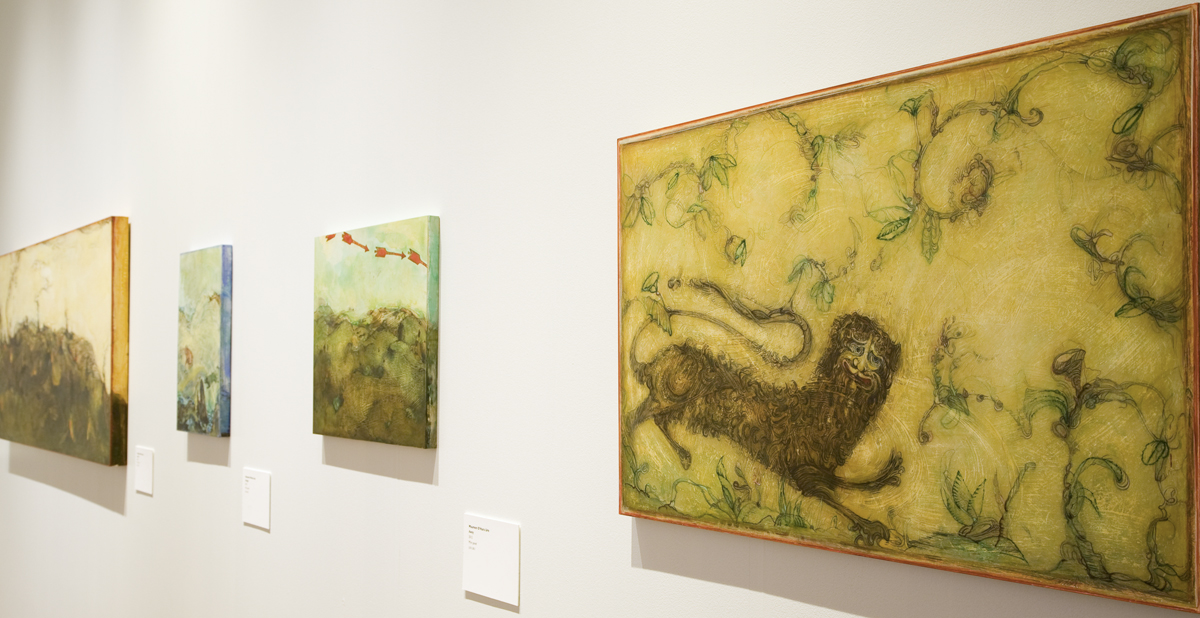 The work could easily be paired with Van Chu’s photographic landscapes, which are more abstract in their ornamentality. Suggesting drops of ink dissolving into water, or curls of smoke rising into the air, Chu’s works achieve light and shadow effects of an unprecedented nature. In the upper register, atmospheric effects are tempestuous while, below, winding clusters of pigment form blots reminiscent of Rorshach tests. The results are lyrical and otherworldly. Certainly landscapes of an infinitesimal scale are evoked, like those of the Bonsai tradition and other miniature worlds. Yet the ink’s flow is not entirely fluid. Occasionally, tiny dots of an inkjet printer betray the work’s medium, introducing a surprisingly technological (and 2D) element, where irreconcilable worlds collide. 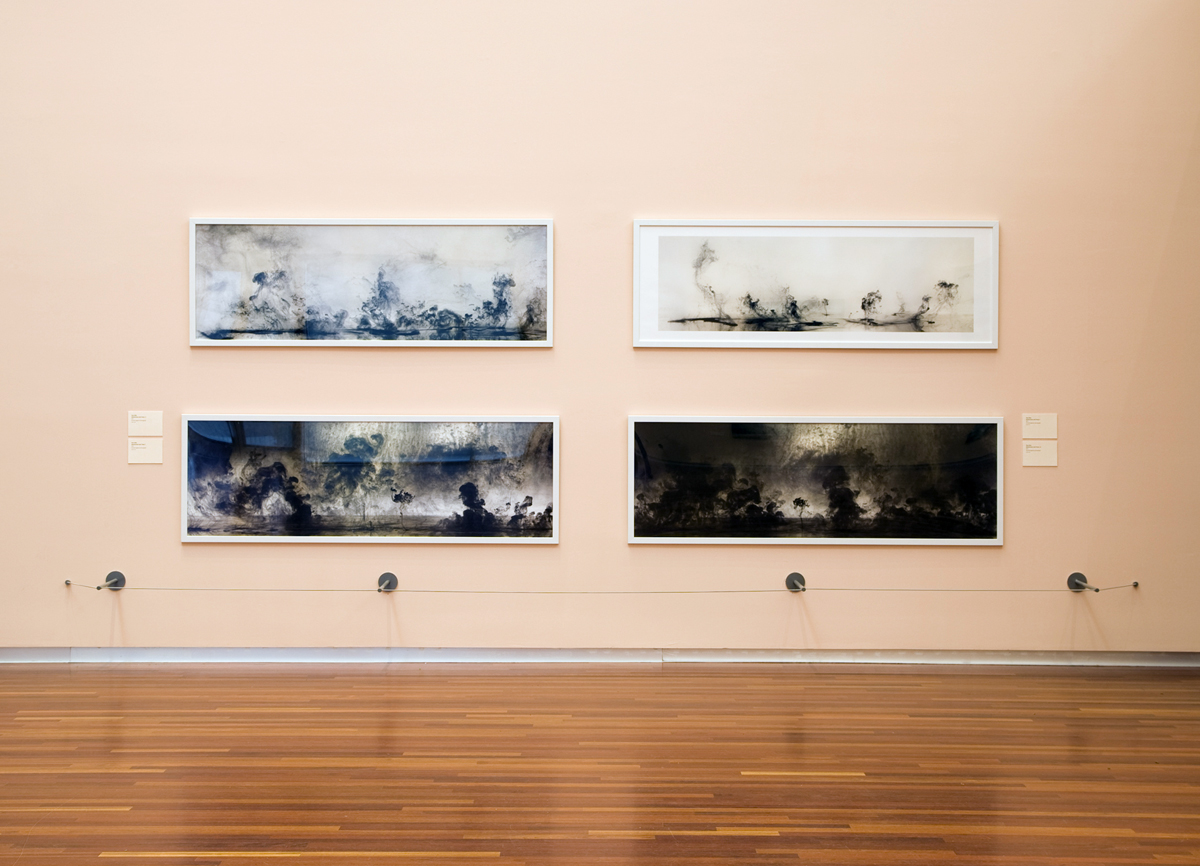 Five small works by Sylvia Ramachandran Skeen explore a biological frailty associated with the marine world.|9| Dripping with a watery, translucent blue glaze, the porcelain material mirrors the substance of a shell.|10| Here, we encounter whale mandibles and upturned crab shells encrusted with reptilian skins and bony ridges. Adorned with graduating teeth, detached fins and scales these creations become serving dishes, cages or indeed miniature water vessels for sea-faring folk. Some evoke the work of HR Geiger, the Swiss artist of Alien fame. Yet with the delicacy of lace, they are far more fragile – and whimsical. 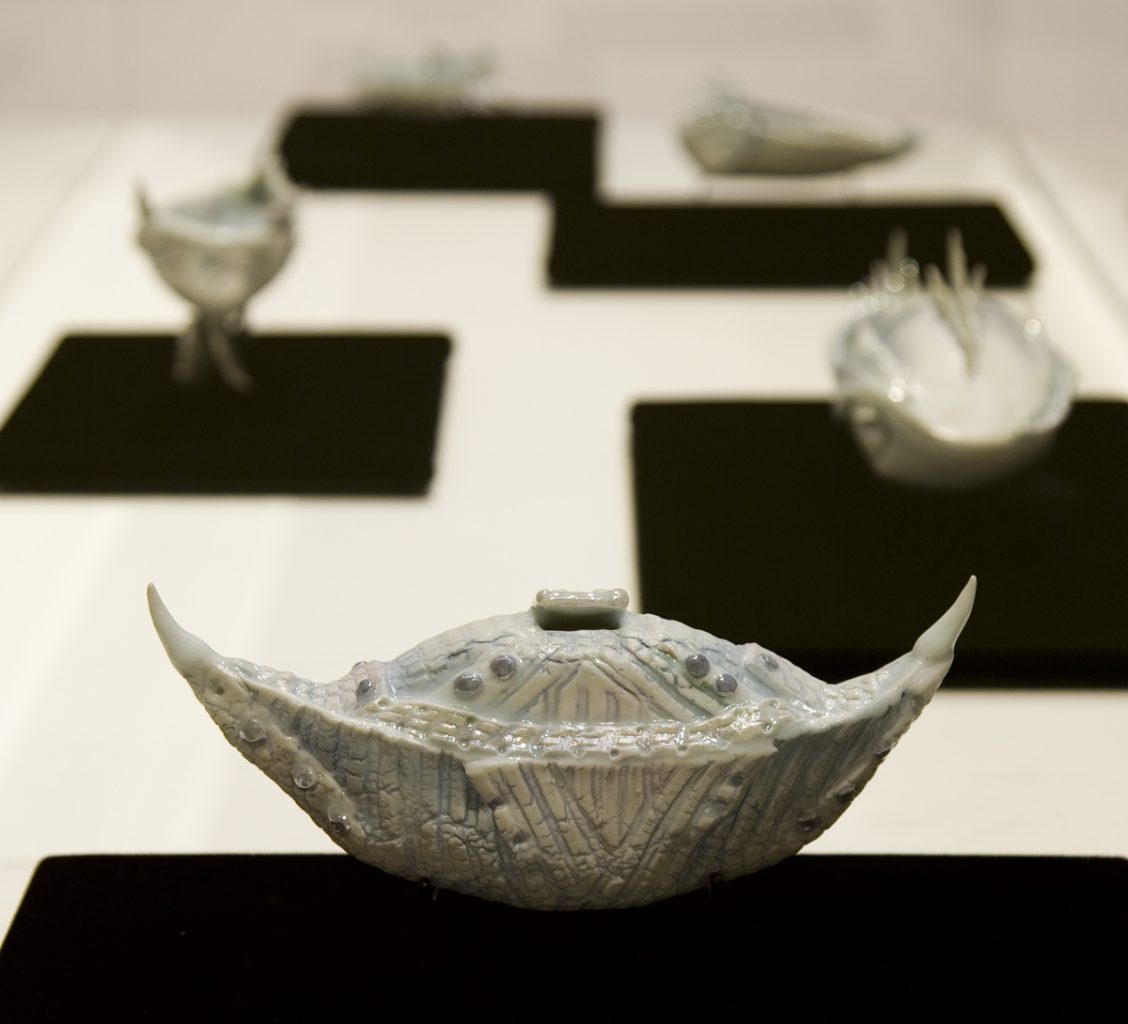 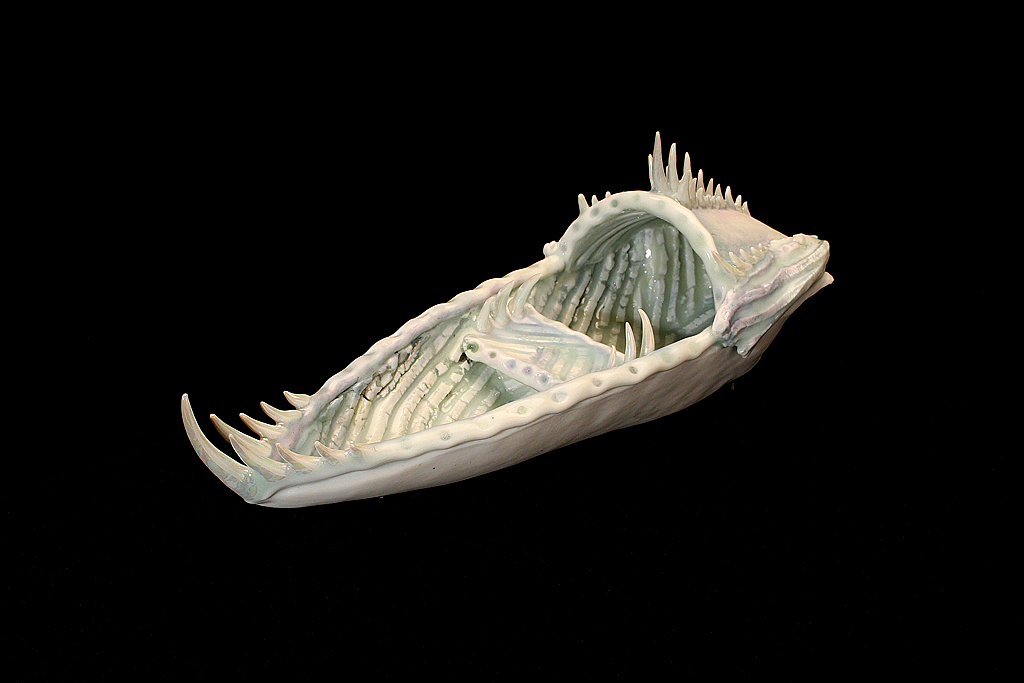 In contrast to these ethereal works, Beth Krensky’s sculpture is heavy and earthbound. Its poignancy leads the viewer to lament the loss of many things: childhood, alchemy, nature, home. A collection of “Keys for Houses that are no More” displays three rows of keys, all with symbolic emblems in goldleaf. Separated from their domiciles, they lead us to wonder what worlds have been lost, and are now beyond our reach. Meanwhile, a dead meadowlark lays inside a gilded tray atop “Portable Altar,” which doubles as a gurney, the bird rests inside a gilded tray. While the gurney’s legs have been replaced with branches, they retain their wheels, a poor substitute for the loss of flight.

This is the subject of “Requiem for Flight,” a vitrine containing nine bronze birds. Each is rendered lovingly, adopting unique positions that literally freeze the animal in flight. As such, the birds twist and turn in uncanny contortions, they are caught in a mercurial plasticity, yet weighed down by their burdensome (bronze) substance. Birds are often symbols of our (soaring) souls – think of representations of the Holy Ghost – yet here are wounded and grounded. Nearby, four more lay in “Metaphysical Handcart” and are accompanied by a collection of little bells, which alert us to an irrevocable loss. Begging to be held, nurtured and redeemed, these birds have also been denied the delicacy of their feathers, and are roughly hewn as if molded in playdough. They lie like relics, helpless in their vitrines, yet I can’t help wondering if they might better reside outside the brick-and-glass museum, on a concrete sidewalk, or a window’s ledge?

Beth Krensky, Keys for Houses that are no More, photo courtesy of the UMFA, University of Utah 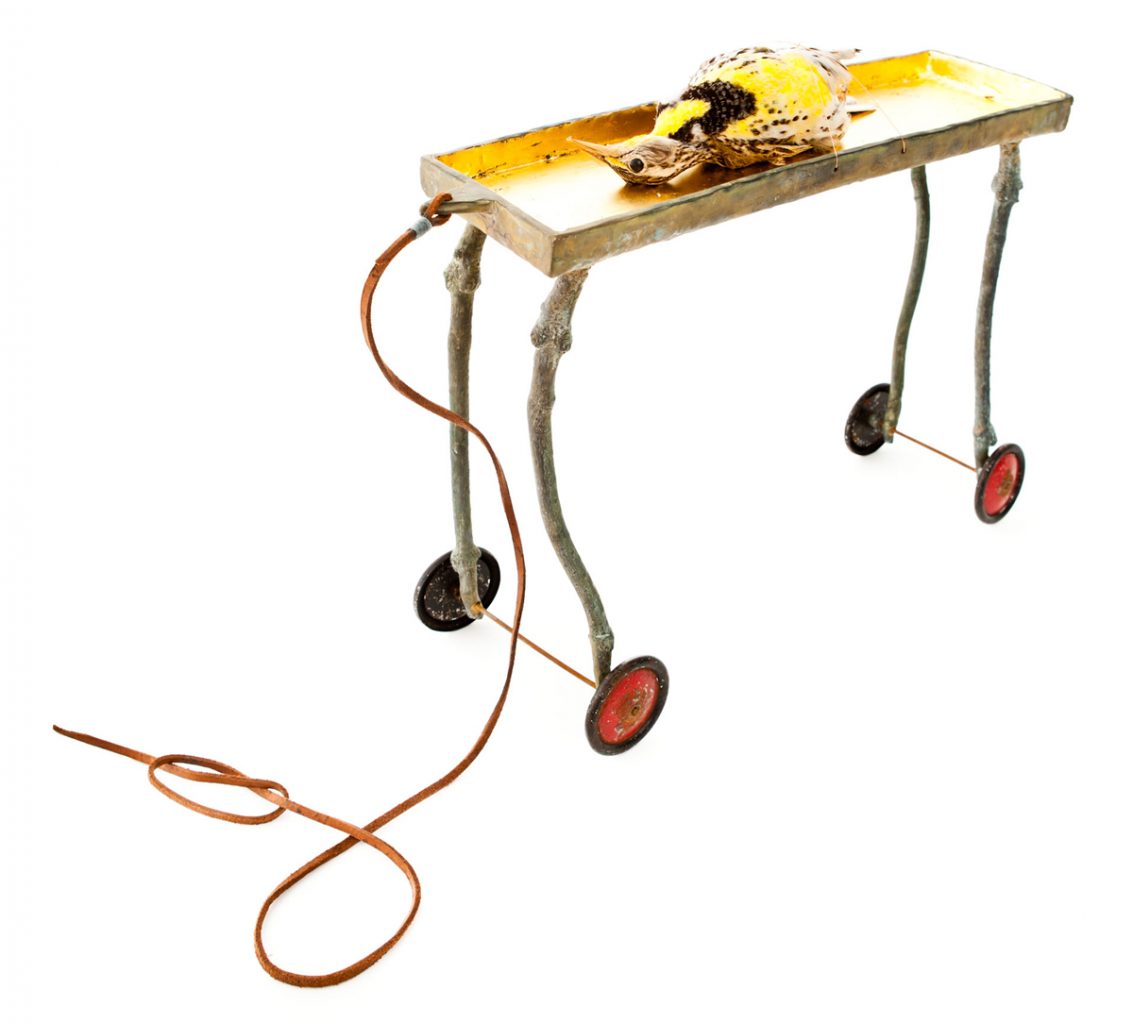 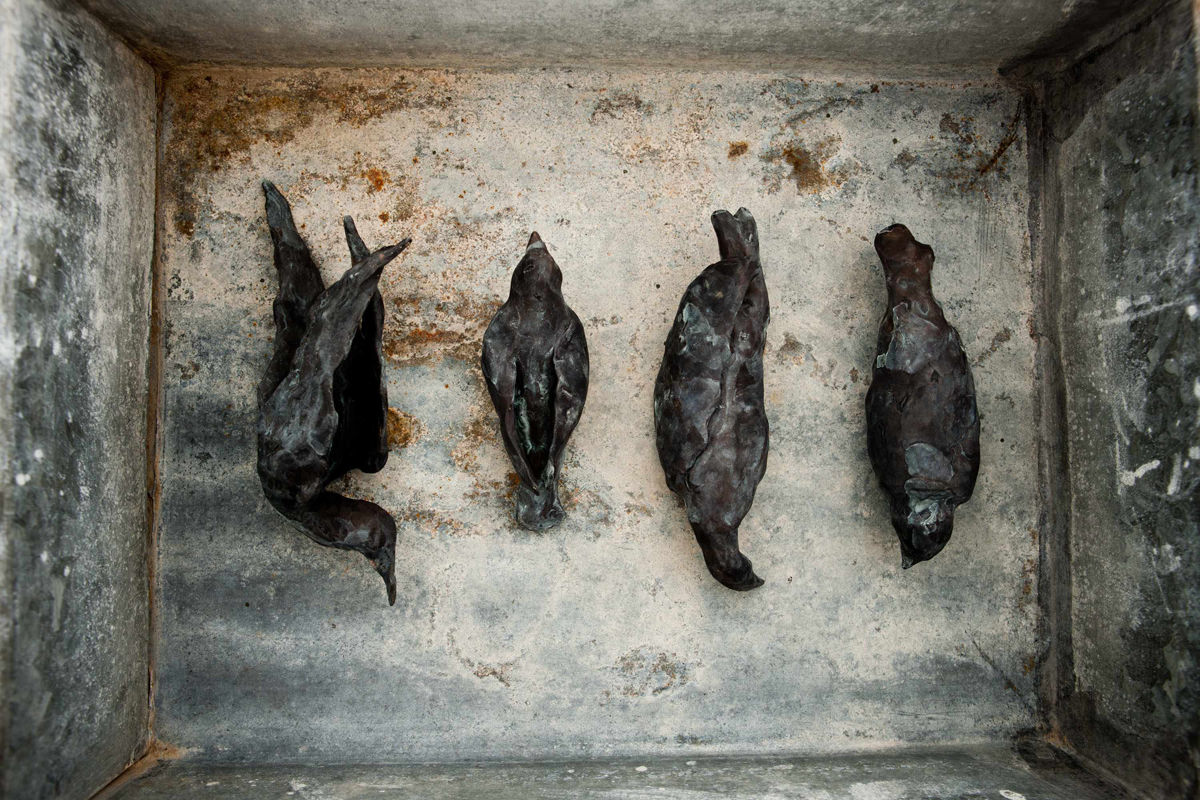 Jolting us back to the present, Holly K Johnson’s multi-media installation “Single Serve Nation: Drive Thru” confronts us with the automated world which we all occupy. Two videos are juxtaposed, one projected on the wall, the other on a laptop surrounded by cast disposable containers. The routine repetition of the processing of the masses – in subways and streets – is juxtaposed with the automated handling of chickens, from poultry farm to conveyor belt. Both scenes are busy, and synchronized such that their tempo, however exaggerated, has an almost hypnotic effect. A soundtrack provides a monotone ticking, which both soothes and irritates. 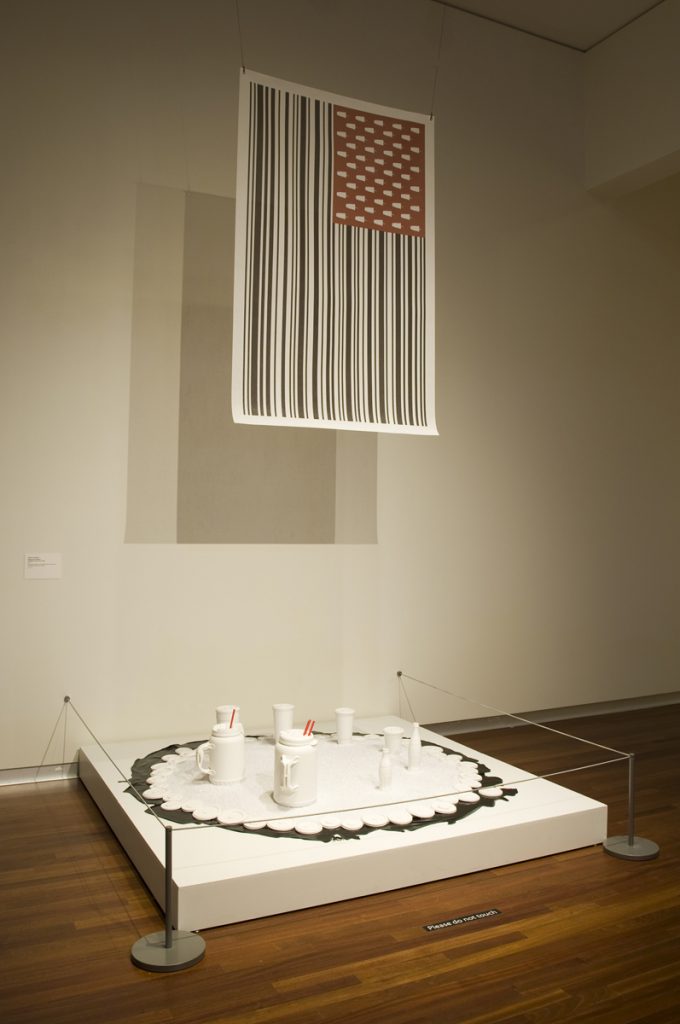 With few exceptions, the works on view at the UMFA reassure us of an active and vibrant Department of Art at the University of Utah. The Faculty Show is on view until May 6th.