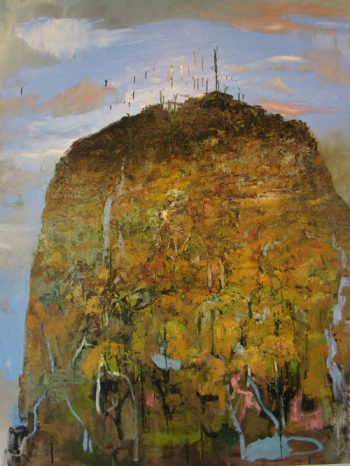 “Monument to Koolau” by Fidalis Buehler

Draw an X from corner to corner across Utah (something the Democratic Party did years ago) and right where the two diagonals meet, in the geographic center of the State, Sanpete County nestles in the valley that shares its name. Like Shangri-la, this long, narrow rift, stretching from the ruins of Thistle in the north to Salina in the south, is so isolated that, when they hear it mentioned, folks on the Wasatch Front usually ask where it is. Where it is to 30,000 citizens, almost every one of whom can recite his or her descent from the pioneers whose remains lie scattered across it, is home: Zion.

It should come as no surprise, then, that Sanpete County’s dominant artistic bent is towards traditional subjects and styles of representation. As a community, its aesthetic heart lies with the pioneer painter C.C.A. Christensen, celebrated more for the conviction of his faith than the skill of his image making. Christensen died in Sanpete County, and perhaps a dozen well known artists can be found at work today within a ten-mile radius of his log cabin studio. But traditionalists are not alone in feeling that their history gives them a right to be here. Abstract painting and sculpture, photography, video, computers, and pretty much the gamut of non-traditional media are found here as well. Competition between the garde and the avant, each backed by a coterie of unabashed partisans, became so acute a few years ago that for its annual juried exhibit the Central Utah Art Center in Ephraim was forced to look beyond the mountains for a mediator who wasn’t related by blood or marriage to either contending party. 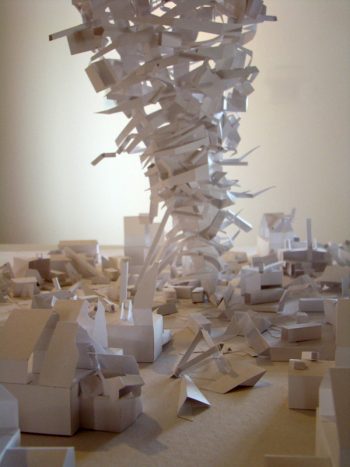 Suburbs with Tornado by Lenka Konopasek

Last year, CUAC director Jared Latimer found such a juror in Los Angeles. This year, he went to New York to find Shane McAdams, assistant director of Caren Golden Fine Art. Together, the seventeen artists that McAdams chose from among those who applied weave a nonconventional tapestry whose elements are historical and traditional—landscape, marriage, family, faith, death—but whose treatment challenges the easy conviction that if we but focus on what’s near, those unsettling sounds in the distance will eventually fade away.


Pride of place for its sheer size and energy goes to Fidalis Buehler’s seven and a half-foot tall “Monument to Koolau,” a thickly slathered distillation in oil of the steep and verdant ramparts that remain of the vast volcano that built the island of Oahu. The Pacific islands may seem an odd place to seek a connection with this landlocked desert, but beyond geological similarities to the Wasatch Front and the red rock country lie far more powerful allegories—felt strongly in front of the canvas—between this invocation of historical processes and our own brief but living snapshot of history stretching out behind and beyond us. The single volcanic vent that has produced a chain of islands as the sea floor slowly moved over it is akin to the singular vision that set so many in motion to Utah and has found so many visible and invisible ways to penetrate its space, each eruption a unique expression that, despite local variation, remains indelibly part of the larger phenomenon, like a musical echo in which the original tune can still be heard. Besides, the island peoples who have come here in large numbers make a substantial contribution to our population: one whose vitality cannot fail to alter our cultural horizons. 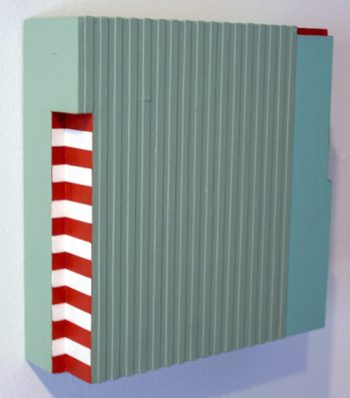 Each year it becomes more difficult, while admiring the grandeur of Utah’s scenery, to ignore the clutter of cookie-cutter homes accumulating like talus at the base—and often across the top—of monument and precipice. In “Suburbs With Tornado,” Lenka Konopasek uses cut paper and repeating parts to capture the environmental blight of these economically graded and segregated communities while acknowledging the risks taken by those who place little besides waferboard between themselves and nature. Compared to the way the wind wrecks havoc with these would-be homesteads, Sunny Belliston‘s wall-mounted sculptures—like music, essentially mental constructs occasionally realized in physical matter—seem remarkably solid. Showing these two artists’ works close together suggests what may be most disturbing about suburbia: its lack of adherence to any value more lasting than the exigent greed of those who sprawl it.

A suggestion of stitching, or possibly beading, animates the static, nervously circling surface of Roland Thompson’s “Molten Mandala.”|2| Circular, concentric forms also make up the more dramatic tubes of Elizabeth Morisette‘s organic “Villia Trio.”|3| Both works make use of wax, a medium that only began to be adequately explored late in the last century. Acrylic, the medium that was supposed to replace all the others, allows Annie Boyer to make veils of color act spontaneously in “Becoming,” while Lia Kim Farnsworth mixes acrylics with graphite to produce much earthier landscapes. Nothing but graphite and paper, along with countless hours of meticulous hatching, went into Al Denyer’s “Flow III”: huge, dark, jewel-like as a skeletal leaf but as detailed and complex as the blood vessels of the brain, it is, despite the ease with which it can be completely overlooked, my candidate for the piece I’m least likely to ever tire of looking at.

There are also two boxes in Utah Ties. In “This Train is Bound for Glory (This train is solid black),” Colin Nesbit (whose deliciously morbid “Well, What Did You Expect?” floats on a nearby pedestal) uses a cigar box as a catafalque to support a coffin carved from pure white salt, from within which a disembodied voice endlessly repeats the title song. Erosion of the salt coffin gives it a feeling of age while suggesting that the rituals surrounding death mean more to the living than the dead. In “Lew’s Homestead Box,” on the other hand, Jayna Quinn argues that the constituents of a place—its creatures, artifacts, produce, its soil and toil—become part of those who inhabit, husband, and come to identify themselves with it. 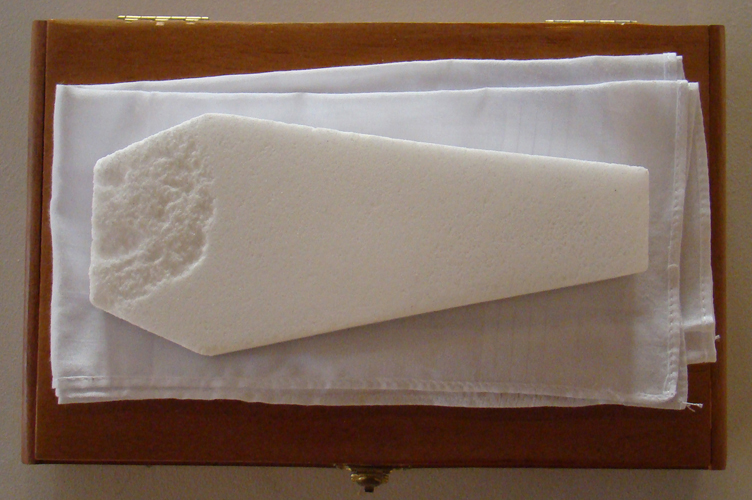 Another otherwise unrelated pair of works is each made of glass. On the wall, Ryan Neely spells out the phrase “Up and Out the Chimney” in subtle, easily missed variations of texture in broken glass shards. The use of glass underscores the possible reference to the Holocaust: Kristallnacht is frequently translated as “the night of broken glass.” But the contrast between what slips out of material being like smoke and the clinkers that are left behind is always with us. A contrasting use of transparent stone animates “99 Names,” Andrew Kosorok’s monolithic cube of glass, within which the Arabic art of calligraphy, which means to celebrate God rather than to mock his creation, reflects itself in sequential permutations that lead into interior space until they become pure light. In forty years of contemplating glass, I have rarely seen such precisely enunciated or restrained eloquence.

It’s reassuring to see how often McAdams’ independent eye reinforces local opinion. Holly Duong and Kelly Brooks drawings, vastly differing in approach but each breaking new ground, took awards last year, while Matthew Choberka filled the gallery only last month. In the week or so remaining it would be worth spending a few hours here and seeing, the economy not withstanding, how wealthy Utah remains when measured on the scale of imagination. 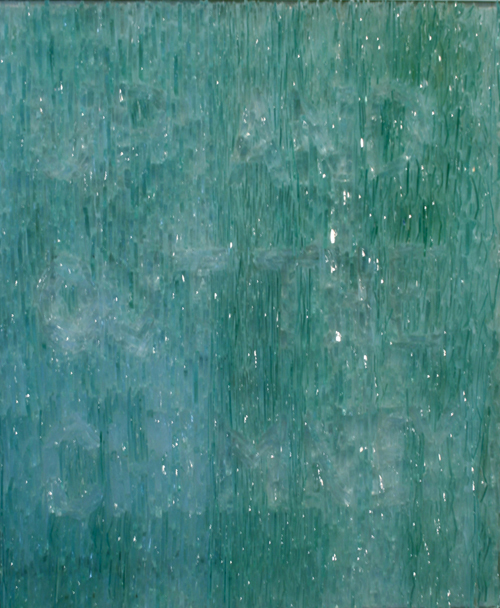 Up and Out the Chimney by Ryan Neely