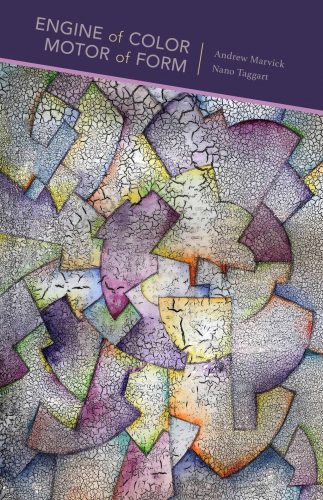 When I picked up this slim chapbook my first impression was how pretty it is to look at. The cover art resembles a map. Not the newfangled digital kind that talks you over a cliff as soon as you let down your guard–an old-fashioned paper map with carefully drawn cartography like an atlas or the road maps I pore over to fantasize about places I might go. This map has regions outlined in jewel tones with ombré edges. Up close the “roads” look like mud cracks or crackle glaze on pottery. Where is this imaginary place? Artist Andrew Marvick calls his painting, “The World’s Dark Centers Stumbled Upon,” after a line in a poem by Nano Taggart.

Taggart’s “Mojave, Dirge” is a far darker poem than I anticipated from the lovely cover art. It addresses post-apocalyptic Las Vegas:

In 1987, the U.S. Congress designated a high-level radioactive waste storage site at Yucca Mountain, Nevada. The site lies just 80 miles from Las Vegas within an area that was used for nuclear testing in the past. If radioactive waste is ever stored there (so far public protest has prevented it) it would be dangerous to human beings for at least 10,000 years. Scientists have not yet figured out a reliable way to warn people of the deep future about the buried hazard. As Taggart writes,

This will be the greatest ghost town
The world has ever seen.

The association between words and image caused a shift in my first impression that Marvick’s artwork is merely pretty. With the poem in mind I became aware of how the ombré fades to black like the charred edges of burnt paper, how the irregular pieces and cracked texture are like broken sherds of porcelain that still retain an afterimage of their former utilitarian shape.

“Mojave, Dirge” is subtitled, “a companion to Andrew Marvick/John Foxx.” Taggart’s poem and Marvick’s painting not only go together, the reference to the Ultravox singer is backed up by a punk(ish) soundtrack you can download. The poems and paintings in the chapbook also draw on the spirit of Utah poet May Swenson (1913-1989) — the title of the book comes from her poem “At the Museum of Modern Art.”

In this collaborative work, Marvick’s art can be viewed as a series of maps to Taggart’s poetic space. His interpretation is abstract, but still literal enough to make the titles (all taken from poems) pleasingly appropriate. Brilliant colors leak through the cracks of a drab landscape in “A Next World’s Leaking Catastrophe.” The painting, “A Map to the Blood Engine” includes red valentines that shift toward a macabre idea of blood-irrigated fields seen from the air. “Shadows of Coming Pasts (That Foretell an Empty Oasis Belonging to No One)” takes the form of a radial scatterplot–perhaps it is the pattern of radioactive dust carried on the wind from a point of impact.

Through the words of Taggart’s poetry, Marvick’s artistic maps expand in time. They are, like all maps, a scaled projection of landscape. At one level they conceal the fine detail that exists in the actual place they represent. On another level they record one specific point in time, a past that will become the foundation of whatever exists in the future. Seven poems and 10 images explore these themes of place and impermanence. As Taggart writes in “Urban Design: The City of Zion Plat,”

This chapbook serves as an exhibition catalog for a collaborative exhibit that was shown at Art Works Gallery in Cedar City, where both reside. (Engine of Color / Motor of Form, 12/1/2017 – 1/31/2018). An article in 15 Bytes tells the backstory of how the two artists met after Taggart sent Marvick some poems he had written after seeing an exhibit of Marvick’s work. However, the chapbook is also a work of art in its own right, a small, exquisite object that you can hold in your hands and ponder. The pieces of it all fit together like the rainbow jigsaw landscape in Marvick’s painting “Absolution Turns Toward Listening.”

You can read “Mojave, Dirge,” first published in The American Journal of Poetry, here: http://theamericanjournalofpoetry.com/v4-taggart.html

Andrew Marvick is an art historian and abstract painter. He has been Southern Utah University’s professor of art history since 2005. http://www.andrewmarvick.com/
Nano Taggart is a founding editor of the poetry journal Sugar House Review and works as director of annual giving and special campaigns at the Utah Shakespeare Festival.  Their chapbook is available from Art Works Gallery.