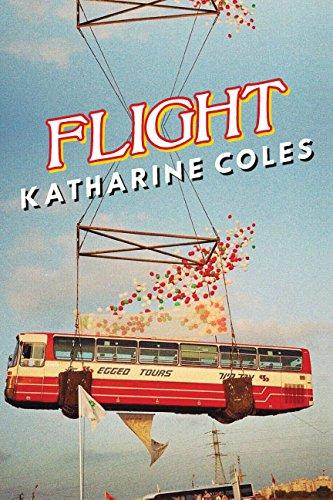 Katharine Coles’ writing style is pared-down and precise. The former Utah Poet Laureate (2006-2012) often uses punctuation in order to minimize verbiage, and favors “erasures” to create new poems by eliminating words from an existing text. The effect can seem a bit chilly, though it set the perfect tone for her marvelous The Earth is Not Flat (Red Hen Press, 2013 ) (reviewed in 15 Bytes here), which was written during a journey to Antarctica. In Flight, her sixth collection, the poet is visiting sunnier climates, touring Italy and Turkey, and the opening poem, “Hotel Mercure,” finds her lodging in an oddly circular hotel,

… Every hall
Curving out of sight, into
Geometry’s continuous now.

Soon we are tagging along on a tour of historic art and architecture, visiting museums, photographing Hagia Sofia, admiring the floors at the Basilica di San Marco in Venice, evading the tour guide at Pompeii and, in the poem “Metaphysical,” pondering the homey details in the frescoes at Herculaneum:

… What
They found beautiful, I find beautiful.
A wet nose. A singing frog. A glass
Round enough to let the grape breathe.

The “Glass House” that provides a title for the first half of the book is a greenhouse full of exotic plants, a “museum of the impossible” where the poet observes her companion slipping through the branches and wonders, “Should I turn around? Should I follow?”

The poems are compelling, but at first reading it seemed to me that there was something missing. Surely there was more to motivate this poetic flight than a summer vacation . . . A note in the acknowledgements indicates that, “most of the poems in this manuscript arose directly or indirectly from a project, ‘Natural Curiosities,’ in my ongoing collaboration with visual artist Maureen O’Hara Ure.”

Although Coles’ poems and Ure’s artwork are both strong enough to stand alone, they resonate even more strongly together. For the curious, some of Coles’ poetry was shown with Ure’s artwork at an exhibit, Here Be Monsters (Reviewed in 15 Bytes, October 2012 ); likewise, the poem “Swoon” previously appeared in a collaborative artists’ book, Swoon: From the Italy Sketchbooks (Hand in Glove Press, 2002), with Ure’s drawings illustrating the fanciful imagery,

Time won’t end
nor what we can picture:

A sky assembled, a pelican
Gone to sea, a dog turned demon pitched across
Limits we imagine.
Anything
Winged may fly—a lion, the dead.

It would have been nice to have a few notes to help match Coles’ poetry with Ure’s artwork, though perhaps to have them separately is a kind of intentional erasure. Ure’s website says that the two artists are collaborating on a bestiary of image and text in response to the Byzantine mosaics of Venice, Ravenna, and Istanbul, and I hope this project is still in the works.

The second half of Flight is titled “Found Objects,” named after a poem labled, “in the mood of Atget,” a 19th-century French photographer famous for taking extraordinary pictures of the everyday Paris where he lived. Coles’ tribute to Atget is a curiosity cabinet in rhyme:

In contrast to the exotica contained in the glass house museums, these found objects tend to be domestic and close at hand–a vase of flowers, a hike in the mountains, a house finch, a haircut — though in “The Body is no Scientist” the poet still revels in intensity over indulgent domestic coziness.

My body runs itself to euphoria and beyond, will run until its knees fray and buckle and its muscles feed on themselves.

And yet, when she’s writing about dogs and their wet noses, Coles becomes sweetly sentimental. “Cleo at Fourteen” is a sonnet for an aging running companion,

Later when I drink my second coffee
She lies on her air conditioning vent. Oh, dog.
In her sleep, she wags and wags and wags.

That perfectly expressive and tender “Oh, dog,” says everything about Coles’ poetic finesse. Two words in italics, and any dog lover is moved to tears.

Flight strikes me as an addition to Coles’ previous work, rather than a new direction, but still, it made me want to delve into her previous work to rediscover one of Utah’s best working poets.