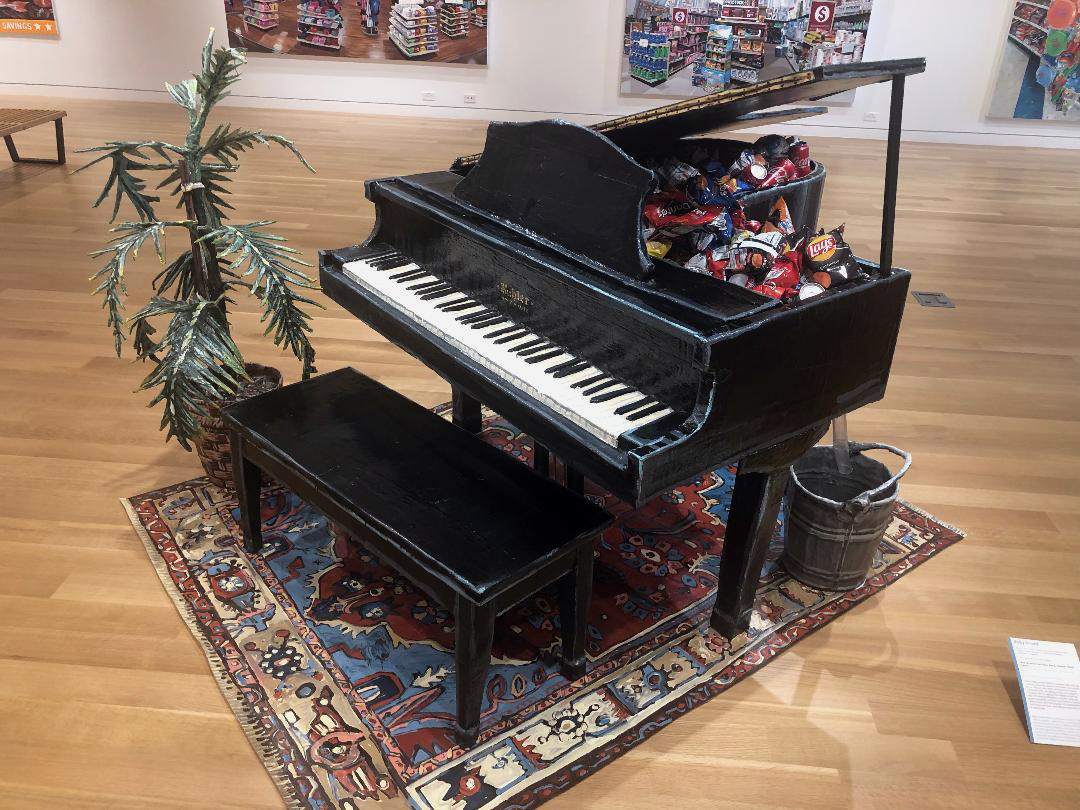 Not every artist gets to see herself become the solo subject of a television documentary, let alone one that takes a retrospective look over her art and its critical reception by one of the nation’s best-known and most-cited journalist-critics. But then Jean Lowe is not just any artist, and when one of the hardest-working women in art realized that television was unlikely to come for her, she took matters into her own competent hands and made a program about her, for herself. “Art and About with Bill Macelry,” the TV special she created along with its fictitious host-critic, easily beats out all those art programs that seek to translate timeless artworks into something they never were: video performances. And it bests them by being an actual, original work of art, in which she flawlessly depicts and captures the subtle and not-so-subtle ways male critics denigrate women in art, while also showing the critic to be as naked as the folklore emperor.

Thanks to its recently completed, three-year remodel and expansion, the Nora Eccles Harrison Museum of Art on the campus of USU in Logan, already one of the finest art venues in Utah, is able to accommodate “Art and About with Bill Macelry” in a small, stylishly decorated living-room like space that emits a widely audible soundtrack to Your Place in the Multiverse, a sprawling look into and beyond the specific installations by Jean Lowe that she chose to include in what is not, but might be labeled, a “mocumentary.”

Whether it was Bernini’s ensembles in Rome or Wagner’s concept of opera as the “total art work” (gesamtkunstwerk), the dream of many an artist has been to make work that creates its own complete environment. That ambitious goal is one end of the spectrum of art that Lowe includes in her own inclusive universe of art. The other end, though, begins with the smallest detail. The potted plants and Persian rugs that lend class to her various installations, which fit so well into the environment they might easily be overlooked, were sculpted and painted by her as parts of what might be called the “texture of taste:” the almost Pavlovian stimulus that is widely thought necessary in signifying that, Yes, this is art, and it should be approached with appropriately somber and unquestioning reverence. 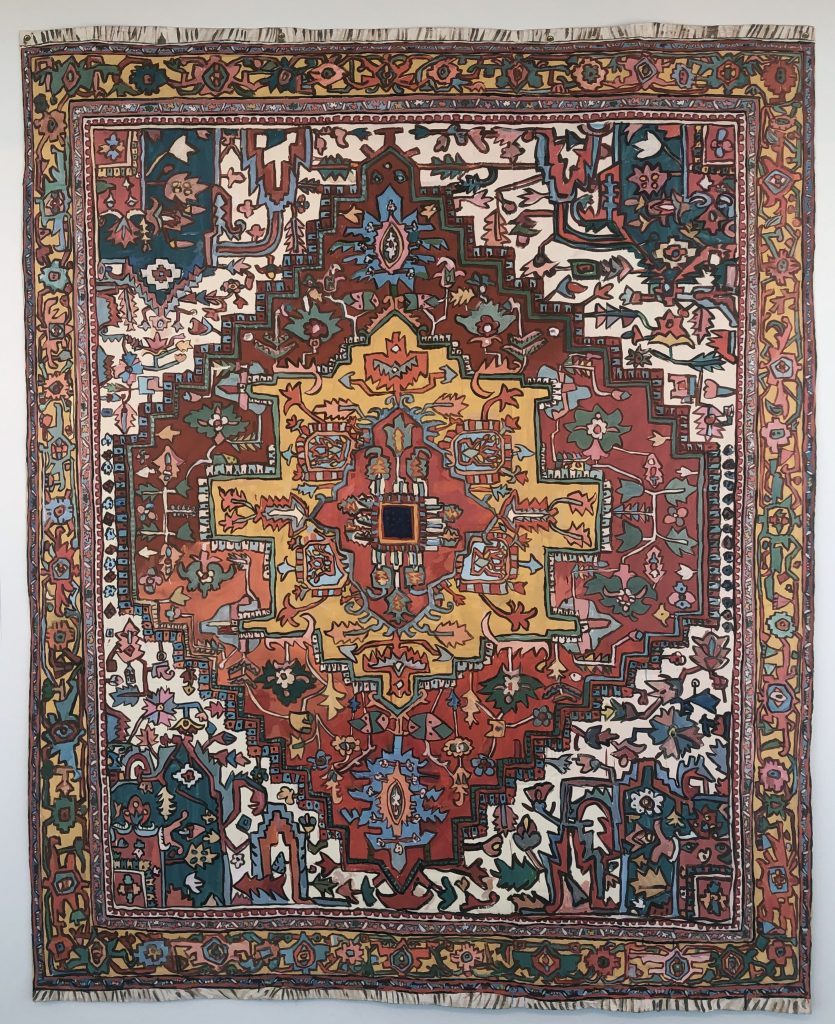 But before arriving at the theater where “Art and About” plays continuously, viewers will pass evidence that no object is too small to play a part in the totality that is Lowe’s Multiverse. The “Discount Barn,” a replica of one of those junk merchandising outlets where everything is “marked down” from prices that can’t be confirmed, or even believed, features hundreds of pieces of merchandise, each of which was individually and laboriously sculpted and painted. In a world where almost everything is mass manufactured, rarely touched by human hands, and where the term “artisanal” has become a mere marketing tool, the hand-crafted fact of what is seen here, stacked in the center and lining shelves on the surrounding walls, generates an almost gravitational distortion; it’s the art that initially looks like cheap crap and may well generate a desire on the part of the viewer to see some “quality” merch, like the identical, tissue thin, silk-screen printed aluminum cans of chemical soup labeled “beer” and selling for less than a dollar a can these craft works mock so well.

If the “beer” succeeds in inverting value, the rest of the merch inverts something far greater. In the history of marketing, the brand was perhaps the only stable element. Brands identified the consumer’s options, allowed shoppers to know what was being offered. But with the imposition of so-called personal brands, your brand vs mine, purchasing the proper name became an essential part of knowing and showing who we are. Lowe’s “Nutritainment” display blends implied substance with aimless diversion, while a shelf of self-help books announces “Because You’re Worth It!” Irony that can almost be tasted comes with products labeled “AS-IS—Unconditional Lifetime Guarantee,” or “Trust and Accountability — 70% off.” Even the walls of the Discount Barn are part of the substitute reality: elaborate Rococo moldings and mirrors that give back the shopper’s image cover the walls, creating an illusion of class as thin as the wallpaper it’s all drawn on. That a popular store that styles itself a “barn” simultaneously affects the decor of money and status dares to approach the shameless audacity of modern capitalism. 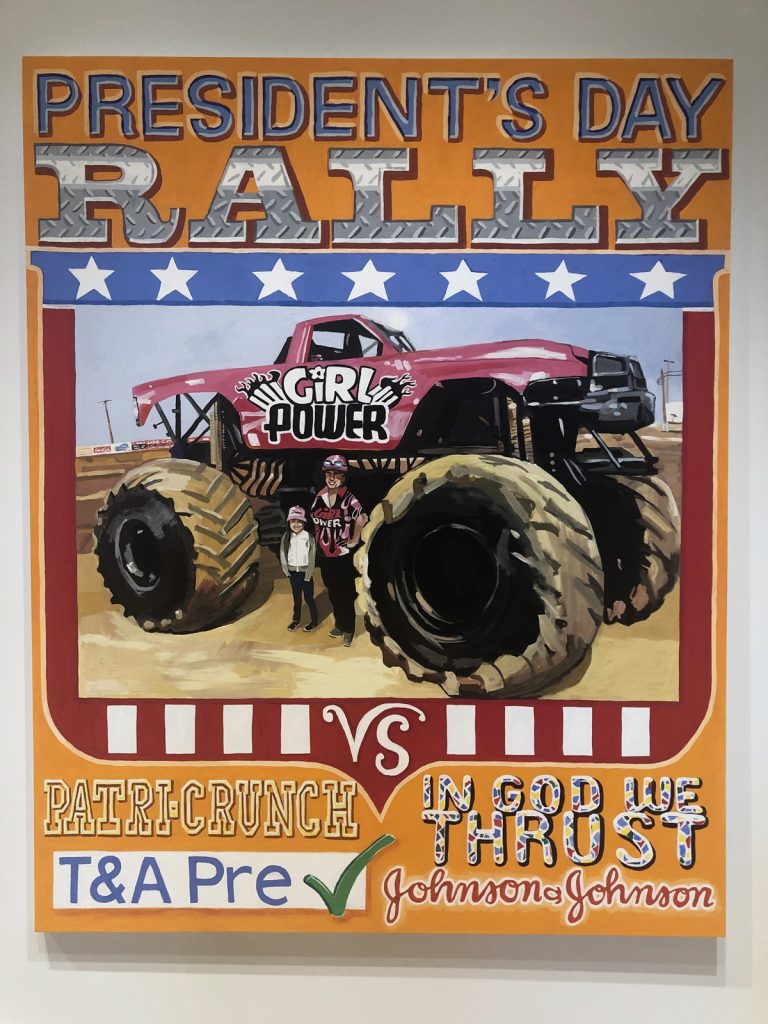 In writing about her work, Lowe has placed emphasis “particularly (on) our relationship with other species and the environment, and how gender plays into that equation.” A more pointed example of how she views the complexity of gender status than the sexist products in the Bargain Barn can be found in the gallery next door, where “POW!” does something similar for the commercial enterprise that is mainstream art today. Standing for Portraits of Women, “POW!” features ten of the most revered, yet most negative images of women, painted by some of the most celebrated male artists of the 20th century. It will be immediately apparent to the audience that these are copies, painted with Lowe’s characteristic loose brush and summary of details, but it’s only a close inspection — as is usually reserved for appreciating the originals — that will reveal that these copies, including their frames and even the shadows cast by the implied museum-caliber lighting, were painted directly on the gallery walls, with a skill that affirms that Lowe’s usual manner is her choice, not her only option. In fact, in a place where DO NOT TOUCH is a sacramental principle, these paintings almost require touching to be sure they’re not real. 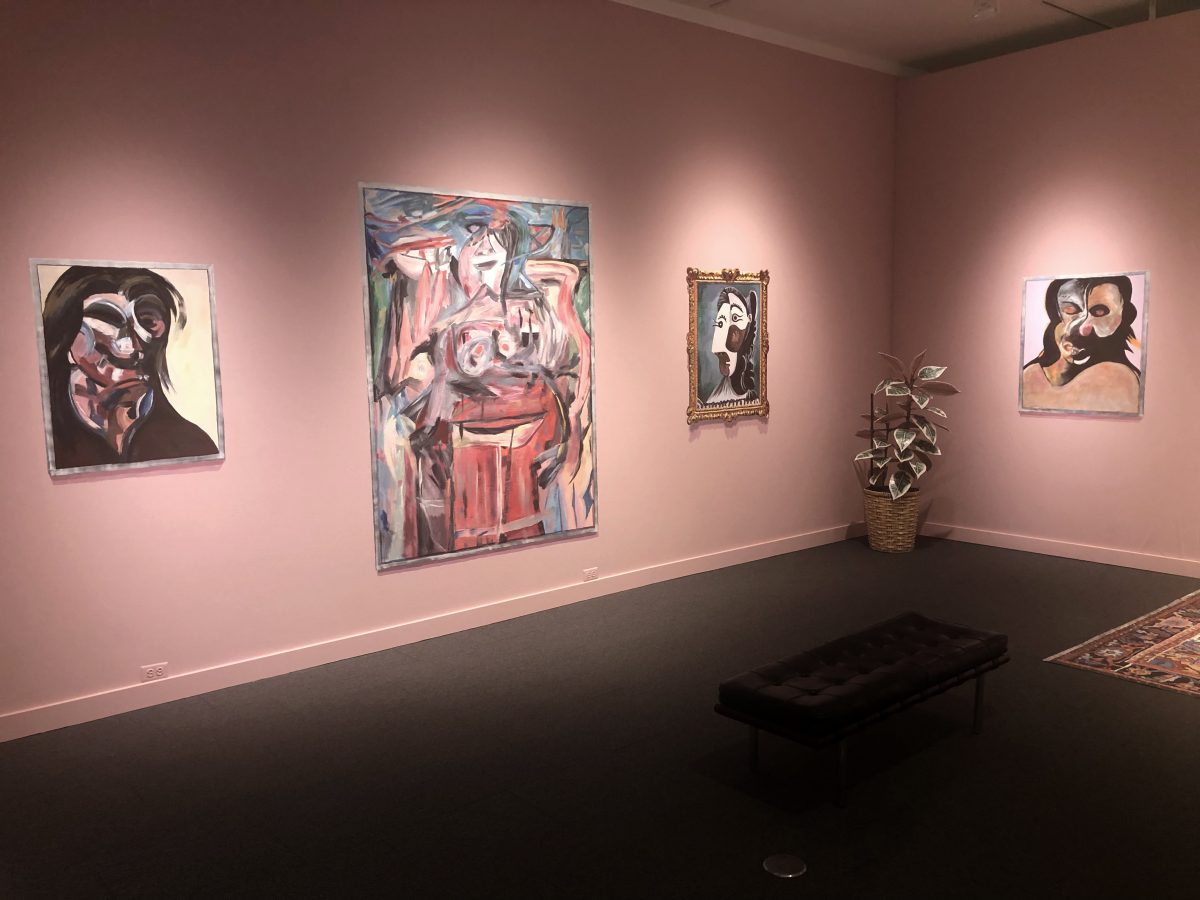 The originals of these works, by Picasso, de Kooning, and other exemplars of Modernism, sell for millions of dollars on the rare occasion when they come to market, and it can be safely assumed that if those masterpieces had been painted on walls, in the manner of Leonardo’s “Last Supper,” for example, those walls would be set aside in perpetuity as invaluable. In the gallery, on the other hand, they will presumably be scraped off or painted over for succeeding shows, thereby suggesting a clear distinction between the idea or image of the painting and its actual, physical manifestation. Lowe’s art always works on these two levels, being at once playful and inviting, even as it forthrightly criticizes the social structures and institutions it invokes. She calls this a “pragmatic choice,” adding “I use the visual language of the home to critique its inhabitants.” 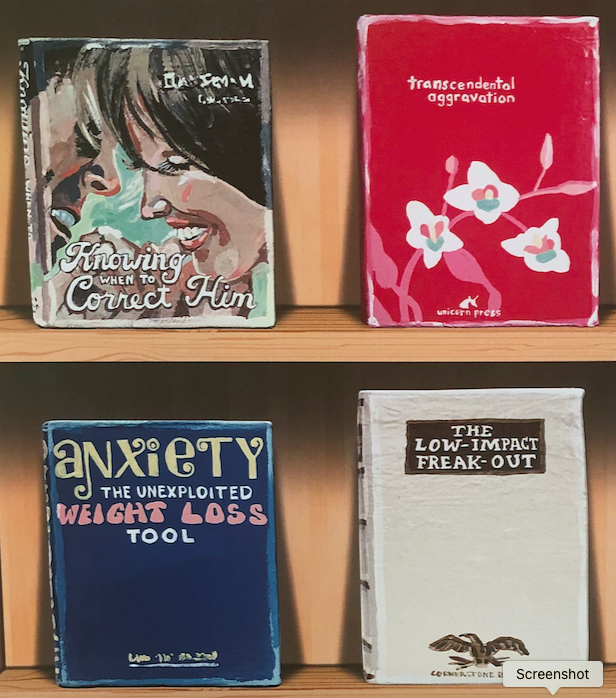 Despite the large scale on which she works, Lowe has no desire to overwhelm her viewers. Some of the installations here, especially in the large gallery, are quite large and generate a physical sense of vast space, which the generously scaled and light-filled room fully supports. These photographically-sourced collages, typically featuring invented scenes taking place inside elaborately ornamental, even wedding cake-inspired interiors, can be taken in quickly, then examined for as long as it suits the viewer. In a corner near them can be found some scholarly materials — photo collages, studies, and smaller, independent examples, that illustrate how she works her way to such effective results. Nearby, a set of bookshelves recalls the virtual ones Apple uses to present digital books, but all of it made real. Well, almost real: these books defy the cliché that you can’t judge a book by its cover, in that the cover is all you get. Their clever titles and catchy illustrations offer their maker, otherwise given to elaborate, labor-intensive expositions, a chance at the artistic equivalent of a humor-writer’s aphoristic punchlines. Some specifically address art issues, while others take on more general topics: most twist ideas or images one might see in any commercial bookstore. A cottage almost concealed behind an elaborate picket fence and flower garden adorns the cover of “Fortress America,” while the folksy title “Rural America” identifies a field of giant, agricultural chemical tanks. These is a kind of “take no prisoners” quality to these one-liners as well. “The Spread of Hope and Democracy” boasts a cover image of an urban riot, while the abstract image on ‘The Latino Experience,’ initially suggesting a de Stijl painting, can be read just as well as prison bars. This building up of deeper meanings leads to ‘Foundations of String Theory,’ on which the unscientific cover shows a torso in a string bikini, perhaps recalling that modern science was generally the work of ambitious, often casually sexist males.

There are ten separate installations recollected in Your Place In The Multiverse, which while only a sample of her exhibitions, does give a representative idea of her themes and variations. Somewhat of a stranger to Utah, Lowe took her degrees in Berkeley and San Diego. Her work has been shown extensively in New York and Los Angeles, but rarely in between. Your Place in the Multiverse came about due in large part to the efforts of George Wanlass, a nephew of Nora Eccles Treadwell Harrison who has worked with the museum she established since its founding in 1982. Wanlass has purchased over 1,000 works for the museum’s truly remarkable collection, always keeping in mind its original goal of collecting works that might otherwise fall by the wayside. He purchased Jean Lowe’s “Empire Style (Burger King)” for the Harrison in 2003, followed by “Overstock” in 2009. These extensive installations are so large that the Museum, before its current extension, had only been able to show them once, a plight that led to the discovery that Lowe had never been given a proper solo show by any museum. To see so much of her work here, now, in spaces that could have been conceived and built to complement her work and vice versa, and in a state uniquely qualified by a history of independent-mindedness to appreciate her, may make this the first great art Utah art event since the Millennium and the Olympics. 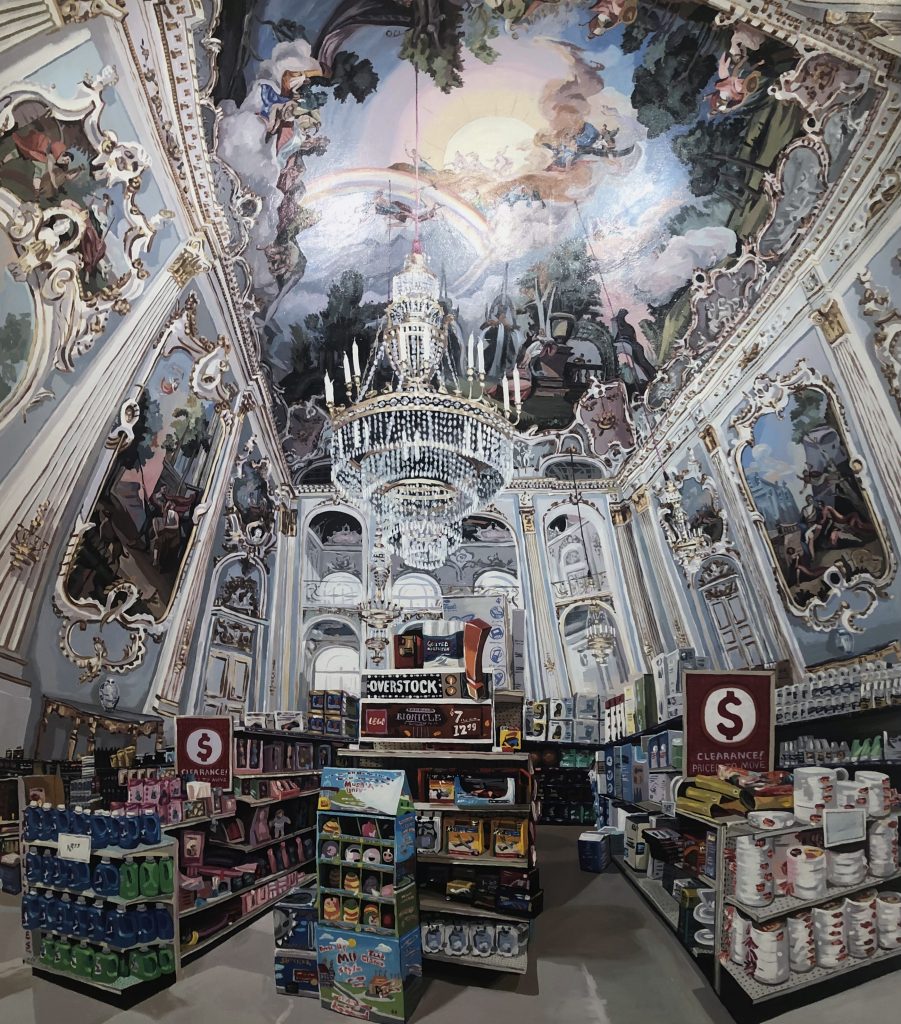 Your Place in the Multiverse: Jean Lowe, Nora Eccles Harrison Museum of Art, Logan, through December 12. 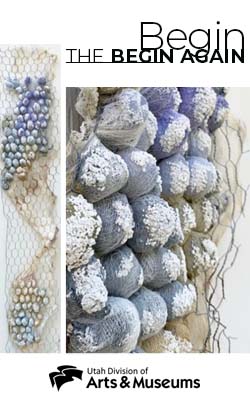 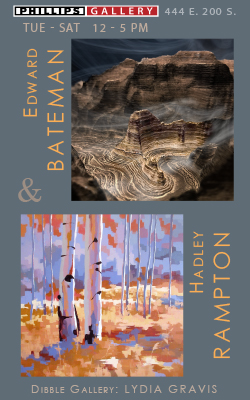 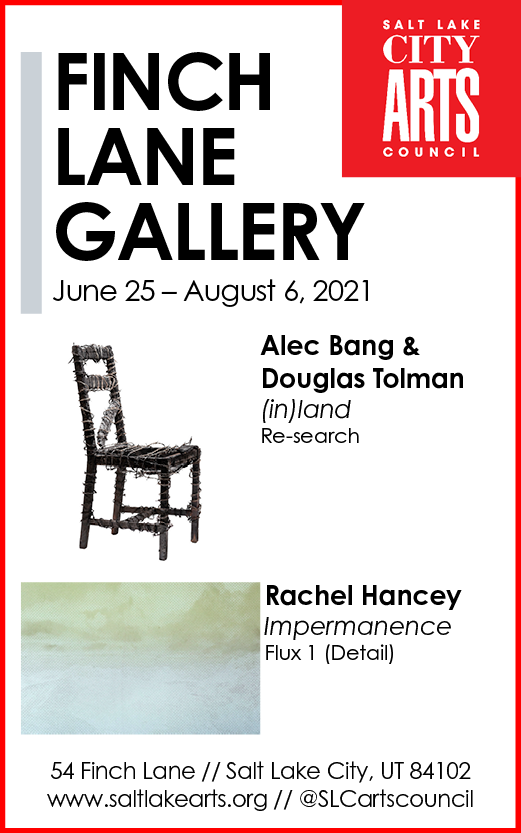