The Perfect Medium: Photography and the Occult 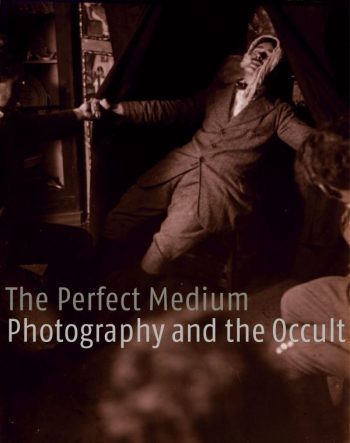 October is the time for spooks and ghosts and this book, produced in conjunction with a 2005 show at the Metropolitan Museum of Art in New York, is the prefect Halloween treat. The Perfect Medium: Photography and the Occult

is a collection of images of ghosts, spirits, and otherworldly manifestations. The majority of these images date from between 1870 and 1930, but there are a few as late as the 1970s. Rounding out the book is a collection of essays, which give a good background on the photographs, the people involved, and the beliefs of the times.

The authors take an historical approach to their subject matter but admit to being influenced by the esthetics of the photos in question. Indeed, many of the images have qualities that will appeal to a contemporary viewer. Although some of the images were originally created as proof of paranormal happenings, the authors go to lengths to state that “no defense or criticism of the occult will be found here.” However, history alone condemns many of the people examined in this book.

With such a broad range of photographs represented, the authors organize their subject into three (admittedly) overlapping categories: Photographs of Spirits, Photographs of Fluids, and Photographs of Mediums. In the section on spirits, the ghosts were not visible to the participants but revealed through the properties of the camera and sensitized surface. Fluids recounts the history of depicting the souls and emanations of the living imprinted directly onto the film without the use of the camera. In the final category, Mediums made the spirit realm manifest and photographs were used to document – and hopefully validate – the phenomena the mediums were able to conjure up.

Photographs of Spirits
Soon after photography was introduced to the United States, a system of beliefs broadly called spiritualism swept the country. The essence of these beliefs was that spirits existed and could communicate and interact with the world of the living. Though popular, this view was considered quite radical and was opposed by both mainstream religion and the scientific community; perhaps the last time these two institutions would agree to join forces.

Although ghostly images were reported in photographs as early as the 1850s, the use of the camera to regularly depict spirits didn’t begin strongly until the 1860s in the U.S. and the 1870s in Europe. It seems no coincidence that an interest in souls surviving death increases after wars.

From our contemporary vantage point, it is hard to imagine that these photographs were convincing. The sitter would go to the photographer and spirits, invisible at the time, would be revealed when the photograph was developed. This book presents a large collection of these images including Mrs. Lincoln and the spirit of her husband, the slain President, as well as many, many others. Nearly all of these photographs have a crude, amateurish quality. However, they often take on a touching aspect because we know that the sitters in these images had powerful hopes to make one last contact with their loved ones. Often the sitters would insist on the genuineness of the photograph in the face of overwhelming evidence to the contrary. The history of spirit photography is a poignant mixture of hope and fraud.

The Perfect Medium also shows the work of some photographers who openly admitted the techniques in creating their photographs in hopes of revealing the deceptions of others. By the late 1880s, faking photographs of spirits was considered part of the repertoire of tricks that an interested amateur could indulge in. Especially fun is a contrived ghost photograph by a young Jacques Henri Lartigue.

Photographs of Fluids
This chapter has some of the most abstract and formally beautiful images in the book and many would not be out of place in a contemporary photo exhibit. These images were conceived of as scientific in origin and sprang from a belief in “animal magnetism.” Originally, this was though to be a kind of fluid that animated life, much like an electromagnetic field. The discovery of X-Rays gave credence to the possibility of capturing undiscovered energies on film. Researchers using photography were soon crediting anomalies as depictions of the souls of the living. Thoughtography, as demonstrated by Ted Serios, was the ability of the human mind to imprint image directly onto film. 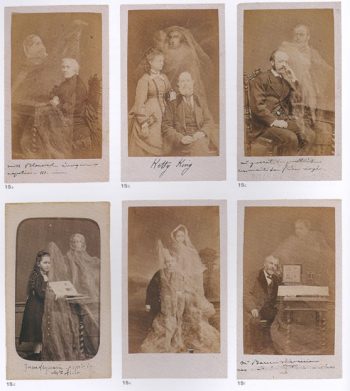 Photographs of Mediums
Mediums were alleged to have specific powers to bridge the gap between the world of spirits and the everyday, ordinary world. The photographs of mediums differ from those of spirits or fluids primarily in that they record the visible rather than the invisible. These images were used to document the mediums special powers and were used as (hopefully) compelling evidence. Here are photographs of levitations, transfigurations, and mysteriously produced objects and substances.

One of the strangest (and best documented) phenomena of this period was ectoplasm: a strange material “exuded” by various mediums. It is reported that during a séance, the medium would go into a trance and begin to produce “materializations.” These were described as beginning as “cloud – or vapor-like shapes” that evolved into “extremely fine, membranous veils” and later into pseudopods occasionally revealing human forms. Albert von Schrenck-Notzin, one of the researchers of the day, felt that mediumistic activity was akin to the process of artistic creation. It is hard to imagine that the ability to regurgitate fabric would have such a powerful effect on people. Although filled with numerous examples, the cover of the book has a particularly wonderful instance. A gentleman in a bow tie leans back in a seeming state of ecstasy with what looks like a wrinkled rag draped around his head and tucked into the corned of his mouth.

It is surprising that when the possibility of fraud seemed likely, that true believers (often noted scientists) would go to great lengths to contrive convoluted rationales justifying the validity of the phenomenon. An example is when the noted medium that went by the name Eva C. was photographed with a cut out from a magazine clearly showing the title of the publication. The apologists claimed it was a manifestation of a magazine that the medium had previously seen and was projecting into physical form. 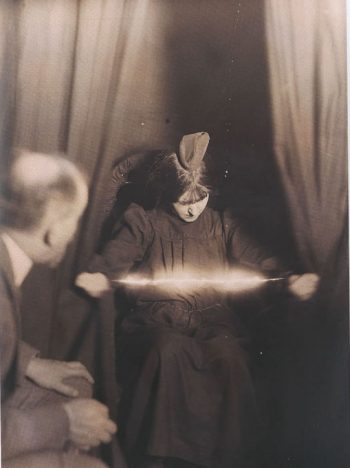 From a purely visual stand point, the images are tremendous. Some of my favorites are the ones depicting levitation. They have a spontaneous, unposed quality that seems unique for the time. This lends them a dynamic and believable feeling. They have a drama that comes from the seriousness of the creators in the face of the (seemingly) impossible.

No one is likely to have their beliefs in life after death challenged by this book – that is not its intention. But it is a great reminder of that spooky feeling that comes with telling ghost stories and the approach of Halloween. It is a reminder of how strongly we want our beliefs and hopes validated. And a reminder that right from the beginning, photography was seen as a plastic medium that has always tread the line between objective truth and visual imagination. I believe that any photograph is made better with the passing of time. And although photos can be faked, they are always historical documents and part of their power derives from that. The magic comes in their ability to create wonder and occasionally, a little shiver.