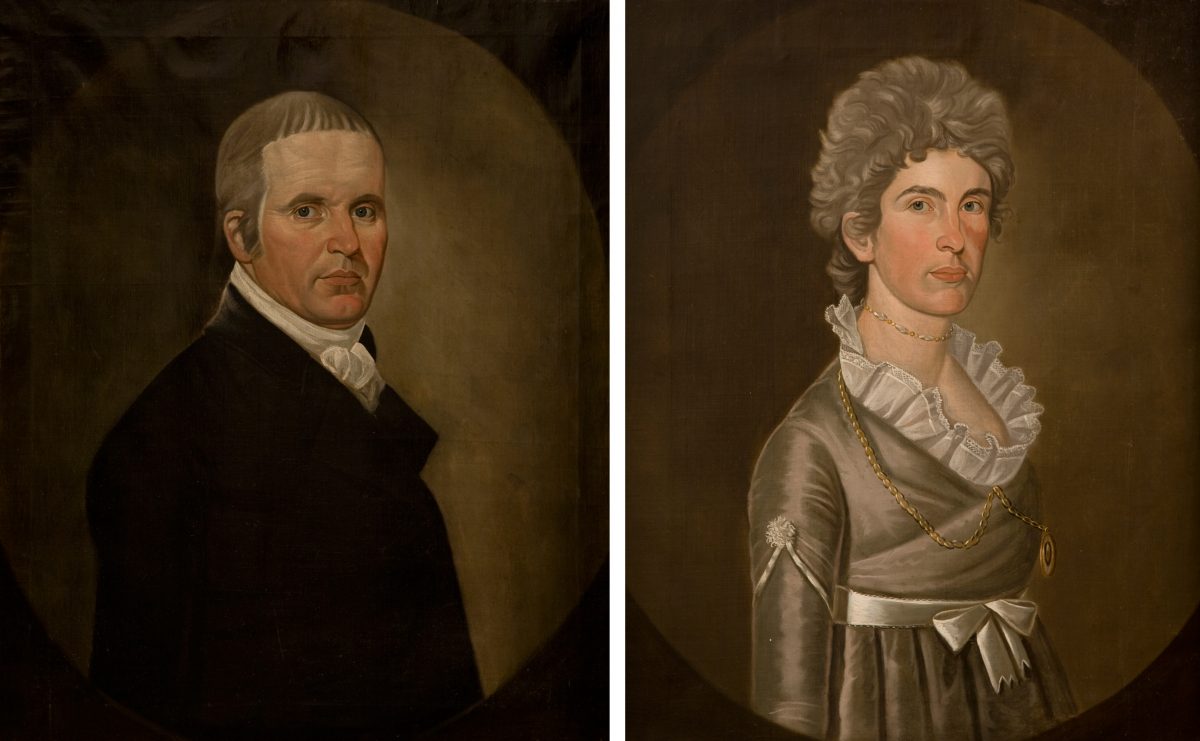 The moniker “power couples” implies two individuals who, while successful in their own right, bring even greater meaning or influence when considered in the context of each other. When applied to art, this expression is even more intriguing: what might an object in the context of another bring to the table outside of conveying meaning on its own? How might this bring new insights, not only to formal artistic elements, but perhaps historical and social elements as well? On view until December 8, Power Couples: The Pendant Format in Art, curated by Leslie Anderson, highlights the UMFA’s collection of pairs, ranging from aristocratic and bourgeois couples, to gothic churches, landscapes, animals and more.

Pendants are two reciprocal works of art intentionally conceived as a pair, working in tandem to imply their own meaning to their viewer. The form originates from ancient Rome, where the diptych was used to allow two distinct visual spaces to exist within the same narrative. Throughout the history of art, the diptych, and forms that have developed from the it — such as the pendant — have been used in different settings and for different reasons. Wendy Ikemoto, associate curator of American art at the New York Historical Society, and keynote speaker of the UMFA’s upcoming Power Couples Symposium in October, has written extensively on the pendent format in art, saying the duo of works “hang visually and conceptually upon one another,” and depend heavily on the space they occupy and the space between the works to ascribe meaning and prompt curiosity in the viewer by way of imagination. While Power Couples stimulates the question of time and space, it more forwardly explores social status, gender, and, as Anderson puts it, analogies, antitheses, and complements.

The exhibition space is siloed into two rooms: one containing the pendent in its traditional form, while the other features nontraditional pairs. Oil portraits of couples dominate the former, joined by one three-dimensional contemporary object of a self-portrait in the Flemish style and one pair of neoclassical portrait busts. Regardless of medium, all pairs in the first room are figurative, conceived in the context of formal portraiture, be they romantic or platonic couples, or characters of fictional or historical origin. Each pair of works poses questions to its viewers, from the compositional and anatomical accuracies to questions of gender and sexuality.

Samuel Lovett Waldo’s “Mr. David Austen” and “Mrs. Davis Austen,” for example, portray an early 19th-century couple while also questioning compositional and anatomical accuracies. Mr. Austen’s hand appears to be disjointed, as if it were extremely foreshortened. What might this tell us about the painting as a whole? What does this inaccuracy do to change the view of the work entirely? How might Mrs. David Austen’s anatomy compare? And what might that contribute to the formalities and understandings of 19th-century painting more broadly? These questions arise in the context of the dialogue created by exhibiting the portraits together.

Situated not far from Waldo’s works, William Jennys’ “Mr. Chandler of Vermont” and “Mrs. Chandler of Vermont” were completed in the same time period as Waldo’s but the style is noticeably different — the artist appears to imply a looser hand with more sculpted features of the figures. More important than issues of style, however, are the suggestions posed by this pairing. Mrs. Chandler’s features appear very similar to her counterpart, suggesting the portrait of a cross-dressed man. While by itself, the portrait of Mr. Chandler may appear mundane, in the context of its counterpart, questions of social normativities and gender anxieties of 19th-century America are brought to the forefront. 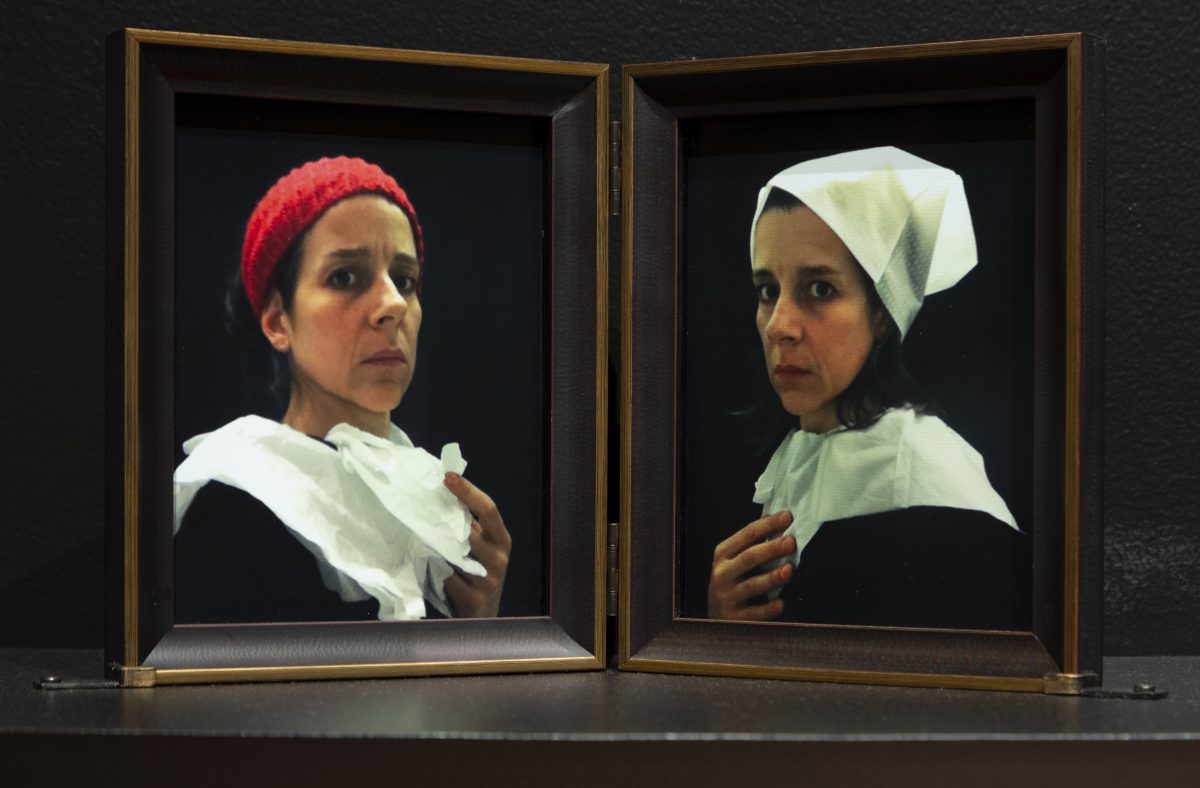 While these sorts of interpretations may arise from contemporary viewers and curators examining historical works in updated contexts, some contemporary artists purposely exploit the historical format to their own ends. For example, Nina Katchadourian’s “Lavatory Self Portrait in the Flemish Style #20 and #21” combine the pendant format with contemporary mediums. Hinged and portable, this diptych mimics Dutch portraiture of the 15th century using only materials found in airplane bathrooms to create traditional Netherlandish clothing. The mixing of chromogenic print with traditional diptych style, all while being adorned with toilet paper makes for a humorous approach to a style that has been associated with eternal commemoration and the divine.

In the second half of the exhibition, traditional portraiture is left behind. From still lives, to sculpture, to film, video and photography, all the works in the second room interact in pairs in traditional and unconventional ways. Some of these works are simply one composition divided into two parts, such as Tony Rasmussen’s landscape of southern Utah. In other cases, curatorial decisions have played a more important role. While it is difficult to parse whether or not some of these works were meant to be on display together, the objects in each pairing were done by the same artist. For example, while Gabriel de Saint-Aubin specialized in visual allegory, it is not certain that he intended “Allegory of Vigilance, Justice, and Law” and “Allegory of Fidelity and Discretion” to be displayed together. Nevertheless, artistic liberties are embraced more here, as mediums are mixed and the subject matter remains nontraditional.

Not tethered to a chronology, the works in these rooms instead confront the viewer with more conceptual issues. Daniel Everett’s “Plinth” duo, with its juxtaposition of a three-dimensional sculptural work of stacked boxes and their photographed counterpart, brings into question not only time and space, but materiality and light. Everett’s video piece, “Ascension II/AscensionIII,” does something similar, sending the viewer down a never-ending airport hall. 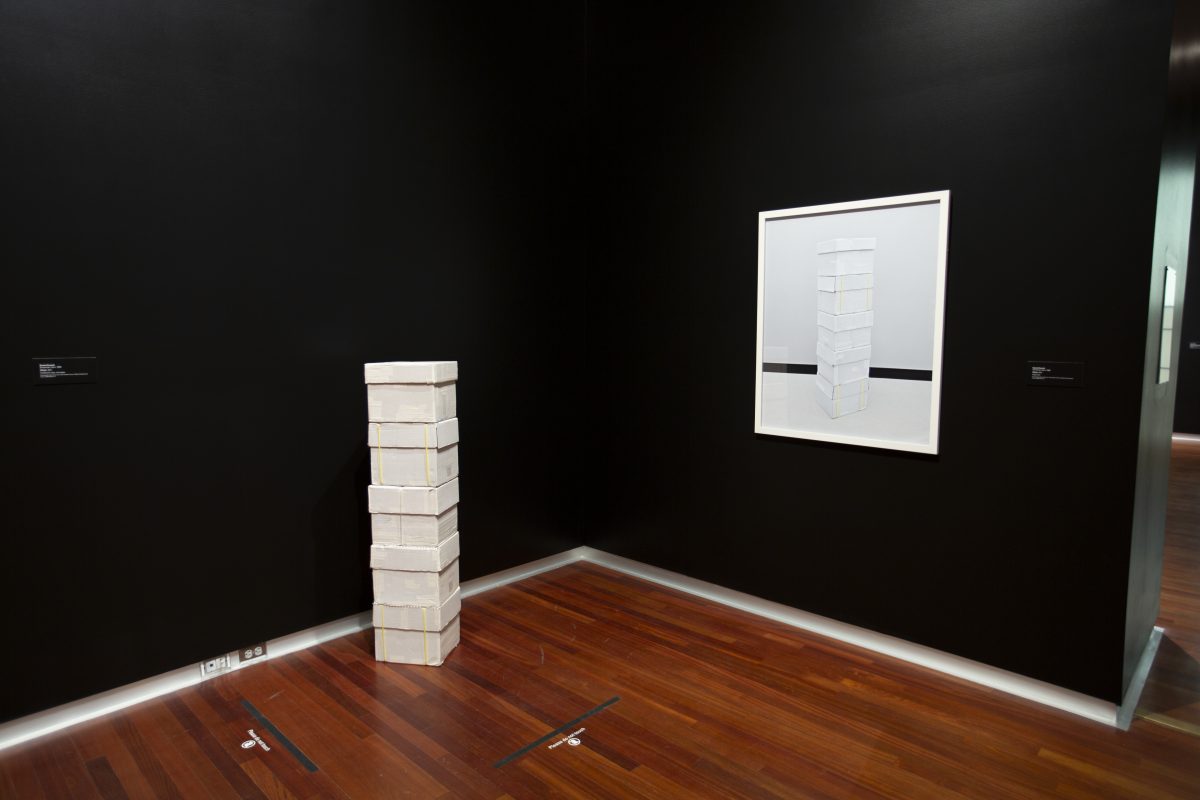 In the rear gallery, curatorial decisions play a more important role. How might viewing Alfred-Arthur Brunel de Neuville’s chromolithographic kitten genre scenes prior to Everett’s work elicit new ideas? What might come from a close looking at something so trivial as Nina Katchadourian’s “untitled [Salt and Pepper Shakers]. And while only 5 inches wide and 6 inches long, Peeter Neefs the Elder’s “Interior of a Gothic Church by Day” and “Interior of a Gothic Church by Night” invite an extremely intimate looking experience, one in which time could only reveal the smallest of detail changes between the two works.

Power Couples is one of the UMFA’s intriguing exhibitions in recent memory, and it is worth noting too that iterations of the duo format echo in the permanent gallery spaces. Peter Voulkos’ “Stoneware Form (Bowl)” and “Plate” of 1973 are on display in the modern and contemporary gallery, while two of James T. Harwood’s male nudes are on display in the European gallery. Even conceptual pairings, such as Spencer Finch’s “Great Salt Lake and Vicinity” and the Great Salt Lake itself can exist as a couple in the viewer’s mind. Interaction between this temporary exhibition and the permanent galleries brings cohesion to the museum. Ideas and questions evoked from Power Couples are the continuous thread that pulls viewers through the other galleries, and makes for a compelling museum experience.

To learn more about the pendent format and related research, be sure to attend the Power Couples: The Pendant Format in Art symposium on Friday, October 4, 9 am – 5 pm.