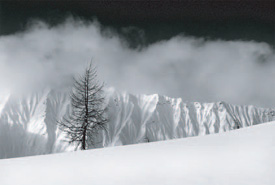 Newcomer Carolyn Guild, an already-accomplished photographer who, with part of an inheritance from her late father, purchased her first professional equipment only four years ago, shows 30 images in Kimball’s Badami Gallery. Inspired by her love of nature and by memories of her photo-hobbyist father, the outdoorswoman photographs areas of North and Central America that are not casually accessible. Her photo sites include some of Utah ‘s best-known areas such as Bryce Canyon and Balanced Rock in Arches National Park as well as other locations from the Bugaboo Mountains in British Columbia, Canada to the beaches of Baja, Mexico. Calling color “distracting,” Guild creates mostly black-and-white landscapes of these locales, both by converting her all-digital data from color, and, when possible, by allowing the stark contrasts of nature to limit the hues.

Terzian Galleries, too, displays work in several media, including oils, glass, ceramic, and wood. “A lot of people don’t know that we have not only paintings, but a lot of glass,” says gallery manager Emily Chaney. Pieces from diverse artists such as the Pacific Northwest’s Callahan Glass |1| and from Magan Stevens of RKS Glass in Readin, Pennsylvania make up the gallery’s glass collection.

For early January, paint will take Terzian’s spotlight. Artist Deborah Hake Brinckerhoff’s bright and lively images|2|, created with a palette knife vibrantly swept across her canvases, will be featured until Sundance begins. During the festival, a wide array of Terzian’s staple artists’ work in several media will be on display. These works, says Chaney, are “mostly local.” The gallery will feature multiple Utahns including Nate Ronniger, David Maestas, and James Baker. Whether paintings of representational simplicity, bold abstract works, or aggressive mixed-media pieces, “everything has a contemporary spin on it,” says Chaney.

Connecting cotemporary and old-world styles, the multimedia pieces of Michelle Samerjan |2| cast a modern light on Eastern tradition. They can be viewed through January 20 at Thomas Anthony Gallery.

Three-dimensional work is currently on display at CODA Galleryas well. Dolls of Salt Lake City’s Kim Brown, who has been sculpting her creations for 14 years, are featured in January. Brown, who also teaches nursing at Salt Lake’s Westminster College uses multiple media, such as paper clay, wood, and fabric to fashion her works. These dolls can be viewed beside CODA’s other early January feature: paintings of Tracey Lane, ethereal acrylics nuanced by emotions and memory. Beginning January 11th at CODA, a show featuring the bovine portraits of Utah artist Charley Snow |4| and the whimsical, figurative oil portraits of Utah artist Cassandra Barney can be viewed.

The broad diversity of Park City’s visual arts and the geographic concentration of its many galleries create an ideal setting for art-lovers. Member galleries are located on Main Street and nearby Iron Horse with one additional gallery located in Kimball Junction. On the last Friday of each month, the Park City Gallery association offers a three-hour stroll which runs from 6:00-9:00 p.m. Attendees begin the evening at the Kimball Art Center located at 638 Park Avenue. An enticing atmosphere, complete with live music, hors d’oeuvres, and prize drawings further enriches the viewing experience. Each month, strollers are treated to interactions with multiple featured artists at the various galleries. A map and ticket may be purchased at the Kimball Art Center for $5.