Phillips Gallery takes exceptional care of its artists. From putting the perfect background color on the walls to creating the ideal partnership in a two-person show — they know the right juxtaposition can result in a sale that benefits everyone.


Gallery director Meri Ploetz DeCaria does the juxtaposition part particularly well. Last year, canvases of Carolyn Coalson’s impressionist color on the walls combined with Dorothy Bearnson’s opalescent pottery made for a show I won’t soon forget. Did I say that was more than a year ago?

This latest pairing of Mark Knudsen’s paintings of the new West and Malen Pierson’s remarkable animal assemblages represents an intriguing new twist. DeCaria explained that every time the gallery makes the schedule for the year “we decide who is ready for a show, who needs a boost to get their career going.” Because Knudsen previously had shown only in the downstairs Dibble Gallery, he needed a partner to show upstairs. A big opening on Gallery Stroll night is expensive — the color postcards, the wines, the cheeses, the necessary hustle on the part of all the staff. DeCaria knew Knudsen had one of Pierson’s smaller horse assemblages in his own collection so couldn’t foresee an objection.

“Because Mark’s work is so linear and so different from anyone else we represent, we thought that given the dryness of Malen’s work it would be a good fit.” (Knudsen, in fact, sold quite well.) 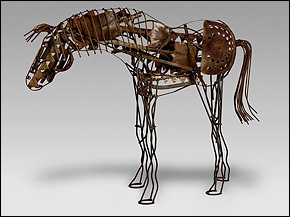 “Out to Pasture Horse” by Malen Pierson

Among the pieces Pierson included are an “Out to Pasture Horse,” 6’high, 8’long, 3′ wide made of old tools, abandoned metals, farm equipment and more.| His “Mangy” shares the same dimensions. “Two Great Blue Heron” (which are striking sitting before Knudsen’s “Three Islands at the Great Salt Lake”) are 10′ high and 3′ in diameter. A sculpture I called “Nessie” of the Great Salt Lake, because I never saw the actual title (and it was more fun not to) was a sort of sea serpent stretched out along the gallery’s west wall. I was too intrigued by the show to examine Pierson’s charming critters carefully and plan to return just to view the hardware, all of which is recycled material.

Among his many collectors, Pierson lists Robert Redford and Martha Stewart (would that be in alphabetical order?). Knudsen looked to see if he was on the list. Sadly, not yet. But he’s headed in the right direction.

Gallery co-owner Bonnie Phillips said, “Mark’s work is quite dramatic because of the lights to darks, and the distance is very important to each piece because it creates that striking expanse of the western desert.”

“First Light at the Devil’s Thumb” by Mark Knudsen

Knudsen explained his work this way: “A man came into my studio on a Gallery Stroll evening last year and commented, ‘You really like to paint dirt, don’t you?’ The only answer that would have been worse than ‘no’ would have been ‘yes’. Nothing is simple.” With Knudsen, nothing is. That gives his work the intellectual depth that sets it apart.

“The stretches of badlands that people ignore as they drive by on their way to somewhere grand are often my subject,” he said. “Discovering, then pointing out through the act of painting, the beauty that lies hidden just below the surface of the subtle film that covers our eyes, is what engages me.” He has painted lonely stretches of highway with gas stations and trucks. Cows and freeway overpasses. All to emphasize the beauty he finds in the West of today. He pointed to the painting of “Island in the Sky,” purchased by a neighbor, and said there had been a fire that day so the sky was smoky instead of the pristine blue depicted on other canvases. “Does she know that?” Hmmm. Maybe he should tell her. “People like to know special things about their paintings,” Knudsen said.

After graduating from the University of Utah in fine art, Knudsen went to work for The Salt Lake Tribune where he would spend the early 1970s to 2004. He was head of design for Features for most of that time, known for drawing birds with Audubon-like precision for a popular weekly column. He also wrote environmental, arts and humor pieces for the paper, did set design for Repertory Dance Theater and cartooning for the National Lampoon.

A short example of his nature writing, just a paragraph about time spent in the Confusion Mountains, gives a sense of the mind behind the brush: “That night, I sit outside my tent. The air is charged and warm. An electrical storm moves onto the valley from the south. No rain falls but relentless lightning fluoresces the cliffs and towers of stone in purple and living yellow. The shapes flash then fade like forgotten gods being summoned from hidden places in the desert.”

Knudsen’s new West painting career really took off when he received an invitation to show in the Charles M. Russell Auction in Great Falls, Mont. in 2006. His work sold well and he was invited back in 2007 and 2008.

Knudsen had two works accepted into “Out West, The Great American Landscape Tour of China.” He received an e-mail from the Hong Kong bureau chief of the Wall Street Journal asking to buy the paintings, but customs wouldn’t allow it. The pictures first had to be shipped back to this country and the newsman and his wife came to Utah to get them.

“They bought those and more,” Knudsen said, laughing. “It turned out she was from Tremonton. Expats are my best customers. Everyone wants a little reminder of home.”

The show closes on July 11. Given the holiday that’s not a lot of time to get there, but get there you should. 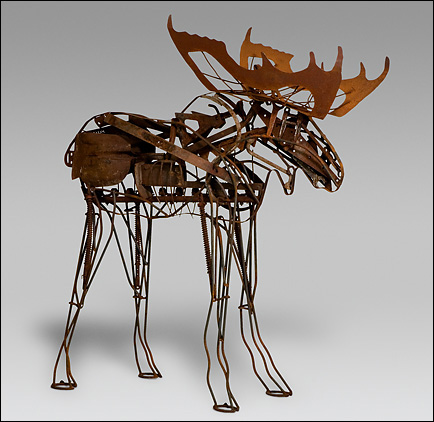 Mark Knudsen’s paintings and Malen Pierson’s sculptures are on exhibit at Philips Gallery through July 11. To view more of their work visit the gallery’s website at: http://www.phillips-gallery.com.