The Mitch Show at RDT 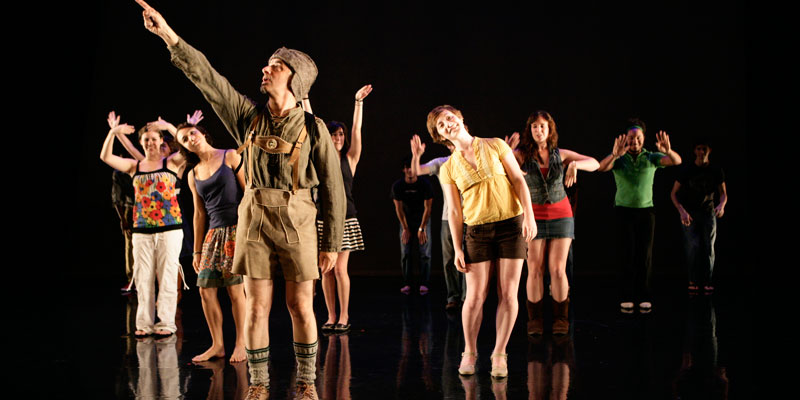 Amongst the many dance events this weekend, The Mitch Show was an anomaly involving prescribed dance performance pieces enacted by unsuspecting audience members as well as screenings of some of Mitchell Rose’s short films. This is not the first time that Repertory Dance Theater has lured Rose to Salt Lake City, but usually it has been to choreograph dance works for the company. This time Rose returned, eschewing the label of choreographer in favor of his current occupation as a mostly comedic filmmaker who frequently works with dancers. His compositional aesthetic seems to be influenced by his former choreographic style. He is probably most well known for his film collaborations with Body Vox, a Portland based dance company with a lineage including people from Pilobolus and Momix.

The Mitch Show began with Rose’s voice on the theater’s speakers telling the audience to take out their phones, call one another, and leave a loud and complimentary message for their friend. It was a grandiose exercise in getting an audience to be accountable for their part in the show and to get people to turn off their phones after “getting it out of their systems.” The show proceeded with Rose revealing himself onstage as the trope of a reliable talk show host, a little desperate for validation, but reassuring in the fact that he had done this many times and knew where we might have confusion as audience members.

He had everyone stand up while he read out demographic information; we were directed to sit down after hearing something that applied to us. He chose to highlight differences based on whether or not we used aquafresh toothpaste or went ice-skating last winter. These things at first seemed pretty benign and funny to think about, but eventually some more basic demographic qualities began to emerge with statements like, “sit down if you rode TRAX today” or “sit down if you got a tattoo within the last year.” I can’t really remember who sat down when, but I got a sense of there being general differences in the audience that I sometimes take for granted. It was interesting to realize that everyone wanted to stay standing at first, but the longer one stood, the more they wanted to sit down with the rest of us. It wasn’t a huge surprise that a young boy was the last one standing having had fewer life experiences and less inhibition about being singled out. The show continued with these kinds of participation pieces that brought out the exhibitionist/performer in many people; however, Rose carefully controlled the activities to keep himself in the lime-light and to prevent indulgent tangents on behalf of the audience participants. A lot of his jokes felt heavy-handed when coupled with campy projections to prompt the audience and an audience who was encouraged to ham it up for the sake of the show.

Rose interspersed the live pieces with screenings of some of his short films. It became clear that, although Rose seems enthusiastic about his performance in The Mitch Show, his charismatic charm is much more evident in the cinematic choices that he’s made. Many of his works are playful, but are imbued with a keen sense of the capacities of the human heart. There was a romantic duet between a man and a giant excavator, a sarcastic film called “Learn to Speak Body,” and a charming film about people with sleep disorders that don’t actually exist. After attending his screening of “Globe Trot,” I was reminded of the meticulous work that filmmaking entails. It is interesting to think that most art forms deal with similar compositional ideas—how a piece is framed, proximity, line, texture, and flow—but limitations vary with the art form and the medium being used. Rose touched on this when he discussed his excitement about Advance. The film is simply a man and a woman swiftly walking away while also dancing, but their location changes every couple of seconds. Rose said that it would be difficult to get an audience to see this perspective unless you had them swiftly walk behind the dancers, which could be interesting, but not very accessible for all.

I appreciated the inspirational nature of “Globe Trot” – a dance film choreographed by Bebe Miller and produced by Mitchell Rose along with many filmmakers from around the world. Each videographer was instructed to teach two seconds of sophisticated choreography to strangers and film them completing the task in public places. The process involved headache-inducing coordination about how to film each person in order to make the dance look cohesive. The film ends with everyone gleefully turning in a circle with their arms above their heads. Each person was separated into a little screen, creating a grid of people, unified by movement. This particular part was uplifting in a similar way that a commercial for a cell phone company is uplifting because they both highlight human connectivity in a world where many groups are at odds with one another. This commercial aesthetic was apparent in a few of Rose’s films creating a sense of artifice because those techniques are also used in schemes aimed at selling something. Mitchell Rose is also selling his ideas and worldviews in exchange for recognition and online followers, not necessarily for monetary gain. His work is conventionally inspirational, but commendable for his perseverance and willingness to play.

The Mitch Show was at Repertory Dance Theatre November 21-22. You can watch many of the films screened at www.mitchellrose.com.