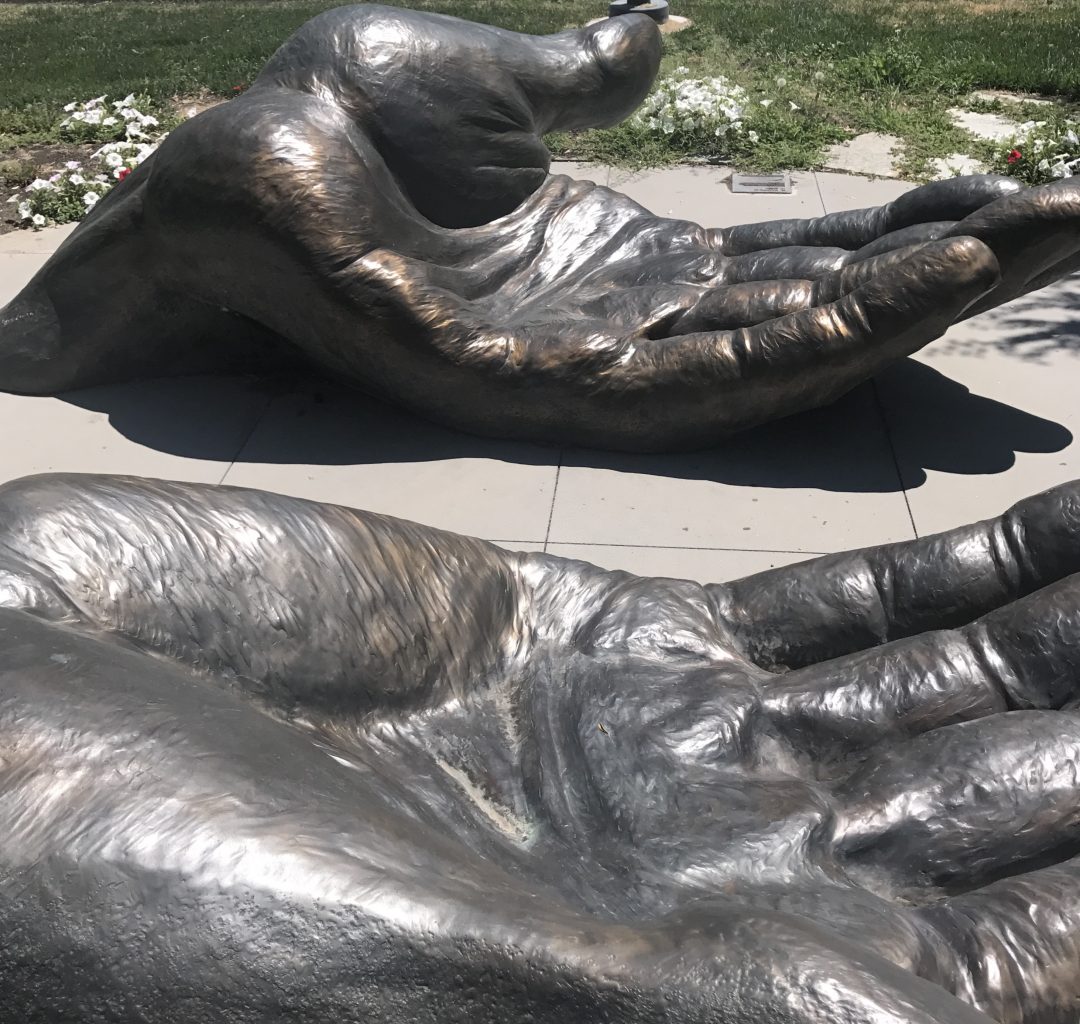 Aside from Greg Ragland’s many outdoor installations in several states is a series of intimate, hyperrealistic portraits of animals, many but not all of them birds. He depicts them among highly abstracted fragments of their natural environments that may initially appear as gestural, almost calligraphic swirls of rich color that convey their active lives. The thing about them is that the popular, public artist doesn’t deny their environmental niches or their autonomous existence, but he locates them more pressingly in our human imaginations, which is an increasingly necessary part of their survival and ability to thrive, the way being adorable helps ensure the survival of children in an adult world. It’s also a suitable metaphor for a number of large, colorful, works of public sculpture that, like the animals he paints, he slots into the human environment so smoothly that, rather than call attention to themselves like so many monuments, they lodge more in the viewer’s unconscious sense of the places they enhance. “Serve,” the huge pair of delicately detailed bronze hands in front of Salt Lake City’s Public Safety Building, which measures 20 feet by 20 feet but stands only three feet high, palms held out to form the sign language word for “Serve,” is a superb example. It also depicts the Muslim equivalent of the way Christians fold their hands in prayer.

Three of his works found their way from their original location in Salt Lake City’s People’s Portable Garden into public gardens and parks: “No Salt, Just Pepper” comprises giant, brightly colored cross sections cut from bell peppers; “Three Peas in a Pod” invites individuals to unite; “Starters” depicts red cherry tomatoes on giant toothpicks. In Jordan Meadows Park, “Happy Go Lucky” brings to life seven-foot-tall four leaf clovers that seem to dance across the lawn. Other works line Salt Lake City’s streets: “Feathers in the Wind” and “Expression” — the former just what it says, the latter a telephone pole-sized paint brush trailing bright red paint — are among the ever-changing works that encourage us all to look up when downtown. 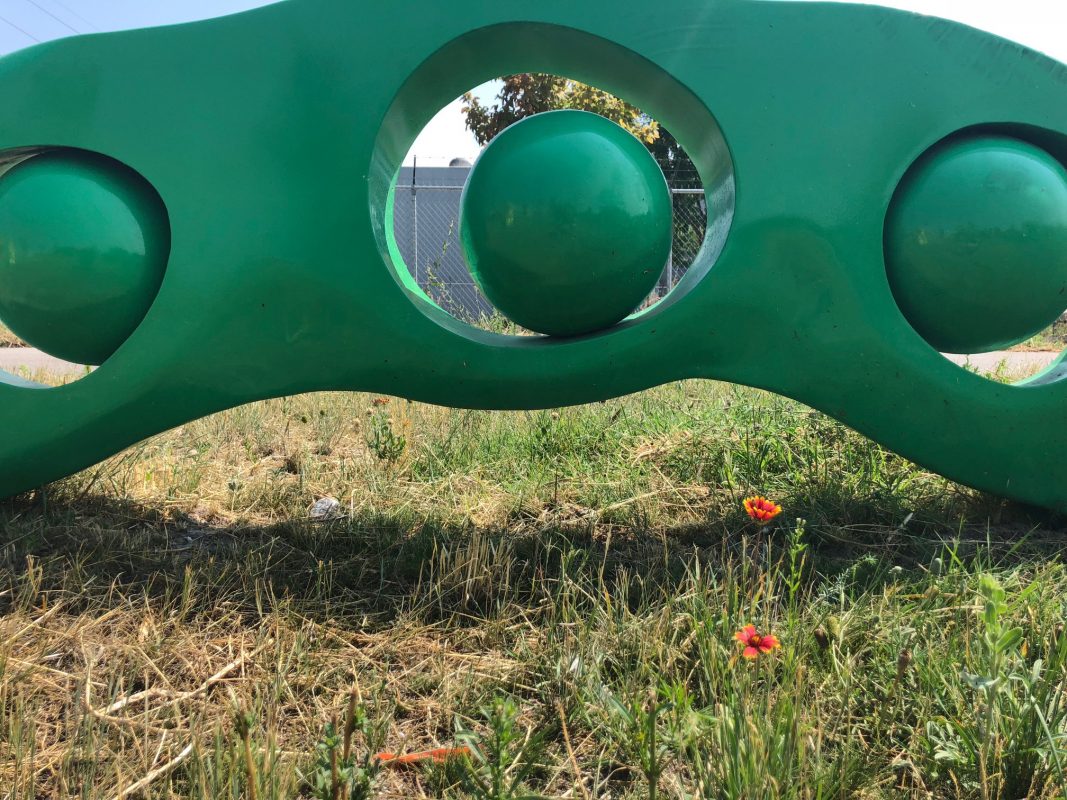 “Three Peas in a Pod”

Like many artists with such a bold, public presence, Ragland must also retire to his studio to make more personal works. In fact, he credits his studio works with inspiring some of his more extroverted efforts. The exhibition currently at Julie Nester Gallery in Park City, then, provides a chance to see the more intimate side of the artist. The paintings he calls “Parallel Layers” are painted on large sheets of clear plexiglass, primarily in acrylic (plastic) paints that he appears to squeegee onto both the fronts and backs, so that neither coat of paint covers its side entirely. Instead, as the eye travels back and forth over the panel, the mind discovers how the various painterly gestures interact in an expansive-but-inaccessible space. Ragland calls the eye-dazzling results “fractals,” and he shares with a generation of painters, including Gerhard Richter, another protean artist whose creativity overflows the boundaries of genre or style, the discovery that capturing a body of paint between a flat blade and a smooth surface can produce a seemingly infinite variety of marks — more evocative than representational, not abstracted from nature but bursting forth with nature’s raw creative power. 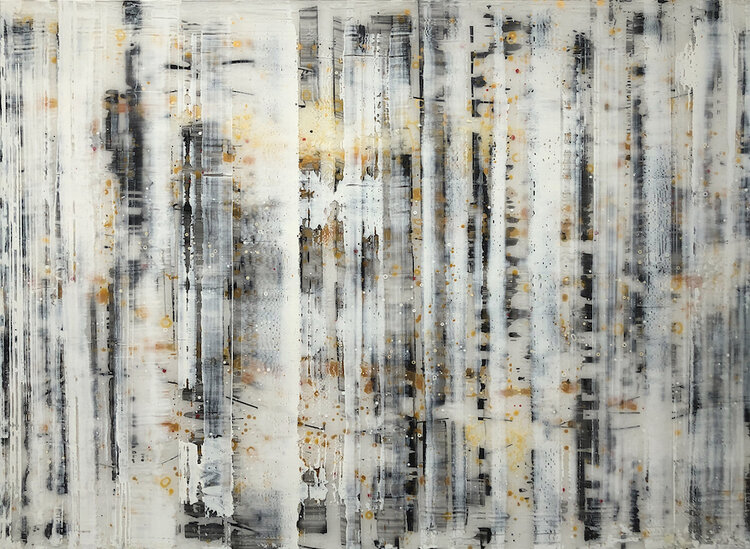 Most recently, Ragland has found a new way to present the patterns of color and visual texture that fill his paintings — a way of ambiguously inserting them into the weathered remains of an earlier time that they then seem to emerge from, uncovered like the results of archeological excavations or the accidents by which ancient languages and technologies become reborn as new art elements. It’s a radically new, unprecedented way of painting, in which patterns of paint appear as the secret inner mechanisms of weathered timbers, revealed as the vegetable parts of our world break down, or like those discoveries that are made of ancient things so fragile that they fade before the eyes that discover them.

Counterintuitively, when an artist makes such a discovery, it comes not as a few hints that come together gradually, but already complete and powerful. Think of Jackson Pollock’s decision to stop touching the panel with his tools, but to use them to fling paint onto the surface instead. Suddenly it was there, he had it. The first handful of splintered wooden posts that Ragland set up in their trompe l’oeil brackets in one of Julie Nester’s side rooms, with their elaborately detailed inner layers inexplicably showing through where the wood had been broken away, struck the eye and mind in a way that was both mysterious and yet made perfect sense. 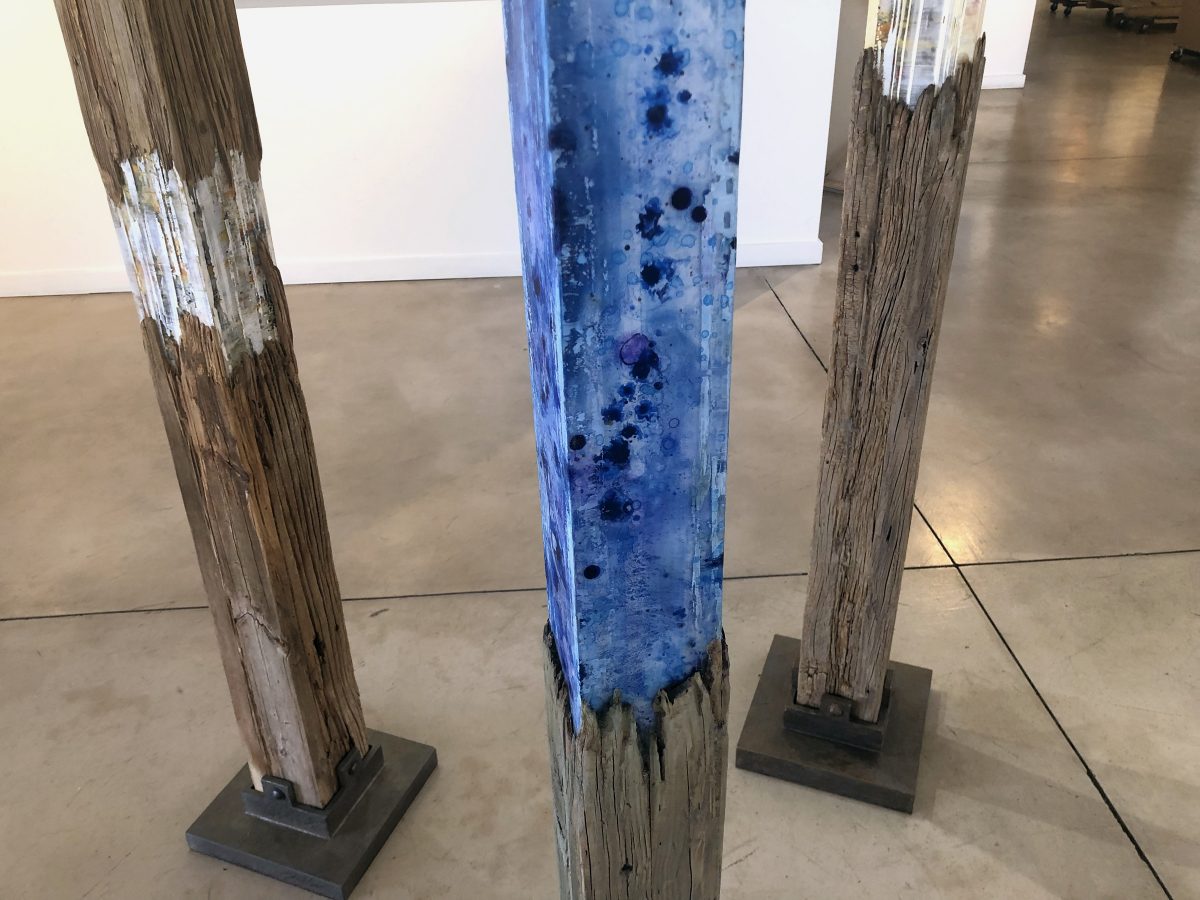 Clearly, the mind of Greg Ragland finds its way into the world by two separate paths. On the one hand, there are his public works, each with its meaning written accessibly, right on the surface, there for anyone to see at once. These are proof that there is nothing inherently wrong with the accessible, with “superficial” meanings. Then there are these new works, which carry unconscious meanings that reverberate deep in the mind, on the level of sensory impressions and feelings, before they acquire something that can be translated into words. For Ragland, then, burying these glyphs, these pre-verbal marks, in old timbers is the best metaphor for where he finds them — buried in the timbers of the psyche, where they grew.

Greg Ragland’s works track the history of his peregrinations, from the high mountain, Aspen forests of Colorado where he was born, to New York, where he lived among tall, geometric simulacra, to the Red Rock spires and chasms of Utah, where he lives today, and from whose sands he literally exhumed the weathered timbers in which, for now, his spectacular visual invention has climaxed. Each of these can be found here or there in his art, and he has added that, while “My comfort zone is painting, my passion is sculpture.” Clearly some artists can serve two muses, and the counteracting appeals of two- and three-dimensions can renew exponentially the life force that powers art. 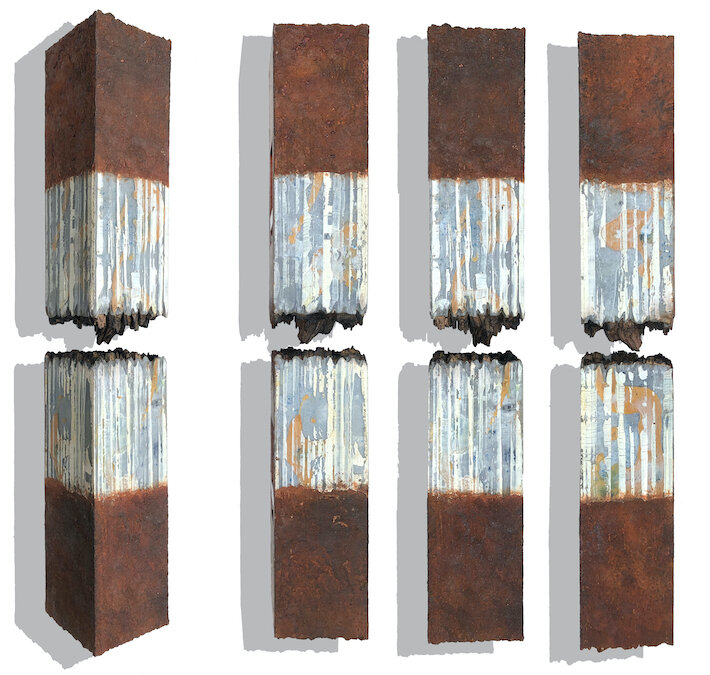