The Kimball’s Wonderland: More a Nightmare than a Dream 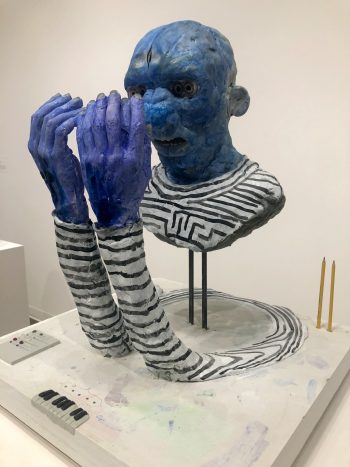 When a living cell divides in half, first it duplicates its DNA and the strands move to opposite ends of the interior. Then it pinches itself between them until it separates into two new cells, each containing one complete set of genes. The new cells are called “daughters,” because reproduction without a male participant is a female prerogative. David Altmejd faced a different challenge when he set out to capture the universal experience of being, as he describes it, “mesmerized by something weird,” such as feeling oneself to be divided somehow. It’s one of a series of bodily transformations he has sculpted, this time in a series of twelve figures titled “Enlightenment of the Witch.” What he came up with, rather than splitting a figure in two like a single cell, is far more elaborate, and perhaps for that reason more disturbing. In “Splitting Smurf” he depicts all of the salient features of one individual doubling in place. Each eye becomes two eyes, each hand grows another set of five fingers from its palms. Finally, the forehead splits open in something that recalls the “third eye” seen in some spiritual representations.

To anchor “Splitting Smurf,” “Ghost Realization,” and “Transcendence” more fully in reality, Altmejd surrounds them with technological clues drawn a little from science, but mostly from the arts: here a rack of pencils, there a keyboard, and in the most wonderfully convoluted instance, a key to the materials actually underlying the visual illusions that confront his viewers. Thus he opens two simultaneous tracks, one the biography of the creature represented and the other the history of the representation, leaving the viewer both believing the illusion and knowing the truth simultaneously. In other works not present at the Kimball, but available on the artist’s website, he evokes far more disturbing physiological ruptures that viewers may feel in their own bodies the way a sneeze or yawn makes witnesses feel an itch or an urge.

There are four artists included in Wonderland, the companion exhibition to Jennifer Angus’s Eat Me, Drink Me, at the Kimball Art Center in Park City. The overall appeal to Lewis Carroll’s Alice books is not as far off as such references often are; Carroll’s Wonderland is a menacing place that assaults reason, logic, and sense, more a nightmare than a dream, and so are these four sets of imaginary, often surreal creatures. From a local perspective, it might have been more helpful to bypass Alice and go straight to Dorothy, paraphrasing her famous remark about Kansas to “I have a feeling we’re not in Utah anymore.” 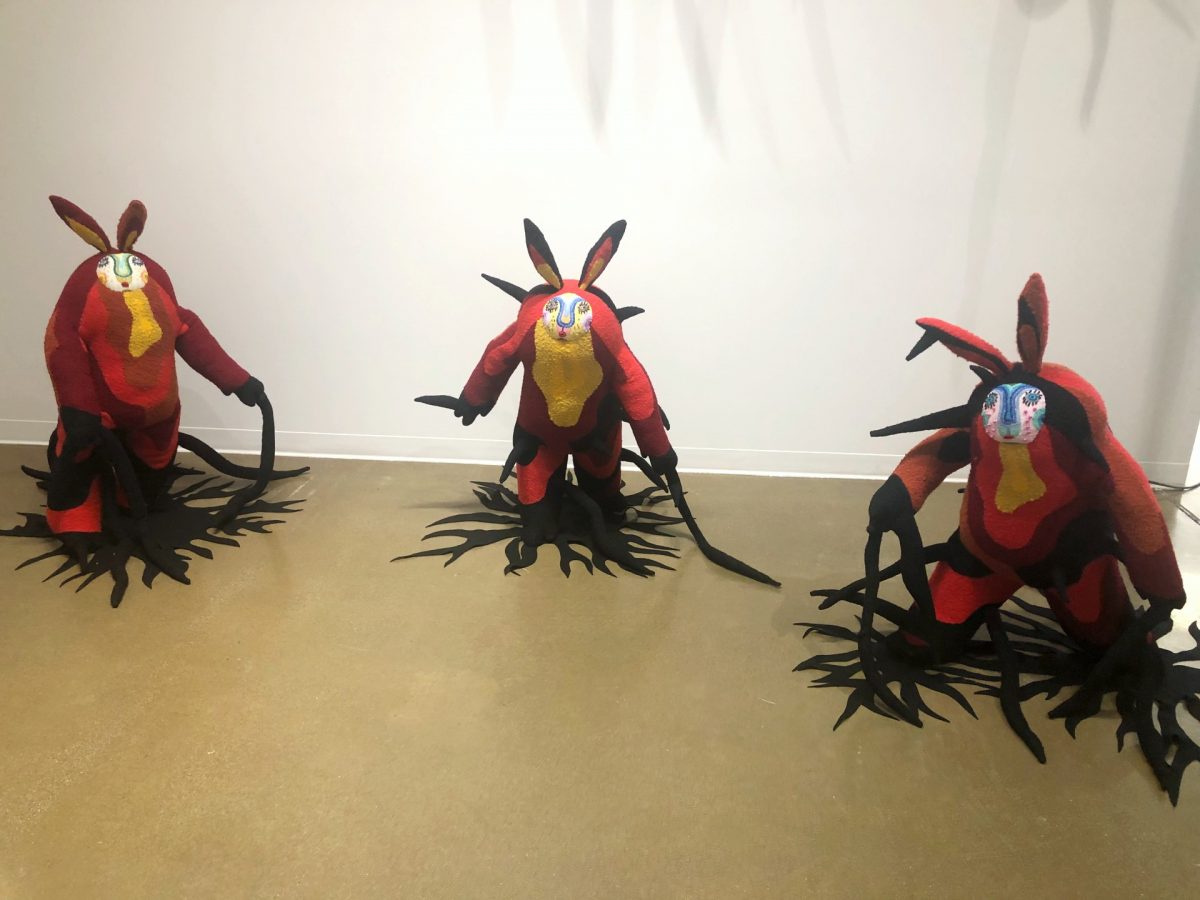 We’re not. The most readily accessible of the four artists is Uta Bekaia, who was born in Georgia — not the Southern American state, but the former Soviet republic — and delivers a folkloric installation based not in the familiar world of Beatrix Potter’s Peter Rabbit, but in European folk mythology and theater design, Georgian Dada, and the Italian Baroque. He calls his installation, which despite its strangeness is popular with children — no doubt a testament to their ability to find something for themselves in even the least welcoming environments — “My Fragile Little Rabbit,” and the use of the singular is no accident. What appears to be perhaps half a dozen rabbity creatures is actually one, who emerges through a wall near the gallery’s entrance and grows shorter as it gradually sinks through the floor. In other words, the room has become an underground burrow through which this fragile little rabbit passes in stop-motion style. Its textile body is cuddly, but its face owes more than a little to the “Nowhere Man” in the movie version of Yellow Submarine. 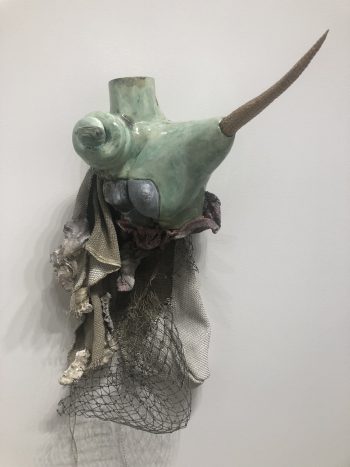 Altmejd’s and Bekaia’s worlds, however strange, are identifiable, even comprehensible. What follows is less so. Catalina Ouyang titles her sculptures with poems, like this:

doubt I (the wreck and not the story of the wreck
at the floor of the flood
primordial lovers
groaning dreadfully
What have we done so wrong.)

which defeats the primary role of titles, which is to tag the art for ready reference. Presumably this one will be called “doubt I.” That said, the actual piece eventually yields some hints of what is abstracted in it, like a torso, an upraised and gesturing arm that ends in a spike, what might be breasts, and a skirt of several contrasting parts. In works not present here Ouyang deconstructs sex and gender matters, of which processes this is likely a result. In her other piece — “It bears the traces if not the stigmata of its ancestry (Oriental Jane Doe)” — she makes reference to a theme also important to Bekaia, which is the role of genetics in perpetuating human characteristics and behavior. The way bones protrude and other, glandular-looking parts interact suggest an anatomical metaphor for human resistance to making the progress our large brains might have helped produce.

Despite the horse’s hoof that forms one of the three tripod legs of her “Urethane Flower on Steel Stem Clad with Foam,” Yasue Maetake is the least figurative of these four artists. Or maybe her figures are the most abstract. Frequently standing up is their most figurative characteristic. Photographs aren’t as helpful as knowing that her ideal dimension is eight feet in every direction. “Lineal Fetishism I,” which includes its own floor and a pedestal within its complete sculptural form, looks like it could be the result of a million years of erosion on a Greek architectural frieze, still expressing the original artist’s intended energy and balance after the surface pretense is long gone. There is, of course, a point where the last vestiges of representation fall away and abstraction becomes pure creation, though in Maetake’s case her use of bones and other found objects will always impose on her work a sense of designer-less design, on loan from the work of natural evolution, however subtle, undergirding the design she imparts. 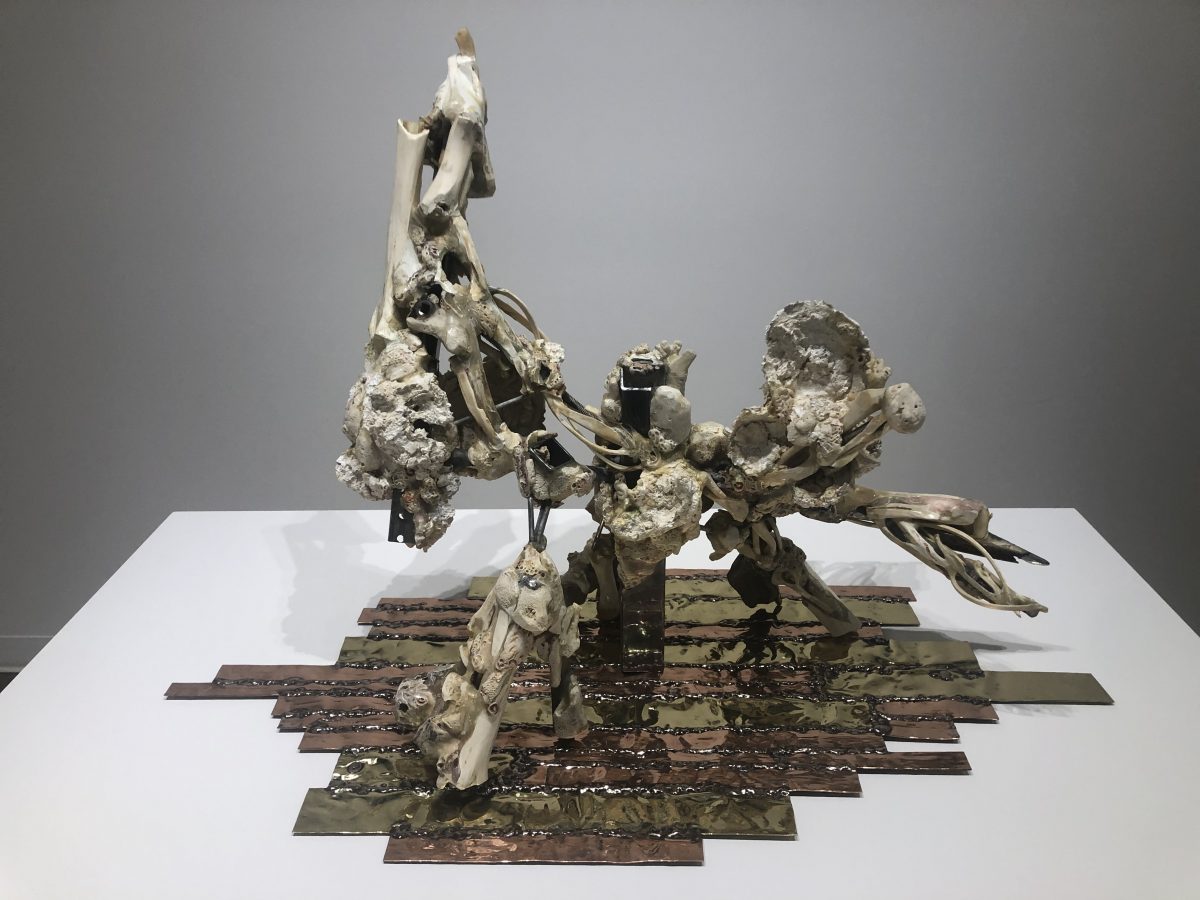