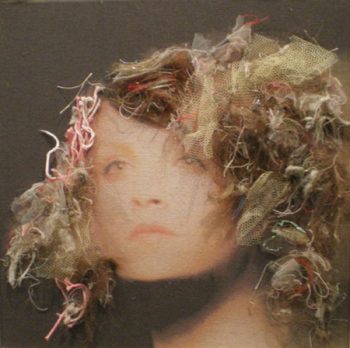 “Off the Top of My Head” by Downy Doxey

It’s one of the ironies of our time that, while most novels and poems are bought and read by women and most self-proclaimed professional artists are women, men in these fields continue to get a free promotion in significance and importance, and stating that ones art is rooted in being female still permits it to be trivialized, if not dismissed outright. So Amy Adams, Downy Doxey, and by association Shilo Jackson are all to be commended for the exhibit of mixed media about to close at Art Access, a venue not known for worrying about its status among small minds and egos.

Adams and Doxey, who reportedly had never met before they decided to show together, chose to stress not female vision, or female experience, but female vernacular. Vernacular is not simply language. Vernacular, which the Catholic Church fought for centuries to keep its rites and texts from being translated into, is the everyday speech that turns our individual ideas and experiences into the medium that we immerse ourselves in together. Unlike language, vernacular is never precisely written down. Capturing its qualities, what it feels like dwelling within it — like the water we swim in or the air we breathe — is accordingly suitable labor for an artist to undertake. 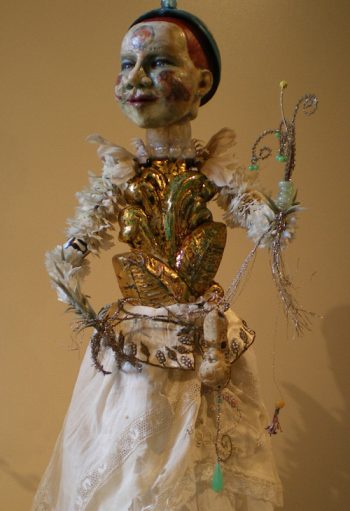 Those who resist the idea that the sexes will have separate ways of speaking are not all men, of course, and plenty of women will find something in the gallery stranger than the men’s work they’re used to seeing. That’s partly a measure of how deeply the hegemony of the male view penetrates, and may also represent the difficulty, even for women, in hearing each other accurately. Several viewers said they found Amy Adams’s sculptural figures disturbing. I heard “creepy” a couple of times, but “uncanny” is probably closer to the mark. What makes them so eerie, and effective, is the way the artist has miniaturized and abstracted her figures, essentially rendering them impossibly lifelike. How their heads are made is not a secret, but the explanation should follow seeing them, not precede and possibly undermine the full effect. Their vivid eyes and convincing flesh contrasts distressingly with their bodies, made from hanks of textile, scrap materials, and found objects with the clever imagination children use in creating their toys. Perhaps what makes each come alive in the mind’s eye is the fanatical attention to detail that each of these imaginary women has apparently lavished on her appearance, striving to express her unique individuality and, at the same time, exercise one of the few forms of power she may possess. Whether it’s the dried leather harness of “Girl in Shackles” or the lacy white linens, ornaments, and feathers of “How the Tiger and the Leopard Came to Me,” the choices are intuitive and beyond question.

Adams says, “I see these pieces as female figures afforded the spiritual room they need.” It may be that the gallery is the only place they can find it. As Auden said of poetry, art makes nothing happen, so any change in the condition of women — or men — will require that a new vernacular seep into the world it describes. Just as what Adams means to be beautiful may sometimes prove unsettling, she raises issues she may not intend. The unease felt by some viewers, to the degree that it isn’t just the result of a confrontation with the unfamiliar, speaks among other things to the difficulty in drawing a line between sovereignty and power. The Vodoun “helper dolls” Adams invokes are not the only spooky human effigies. Still, power limits itself when it chooses to tell only part of the story. If Amy Adams wants to speak the whole truth, and not just a part of it, she will enlarge her inventive populace to include the full cast of the human comedy. 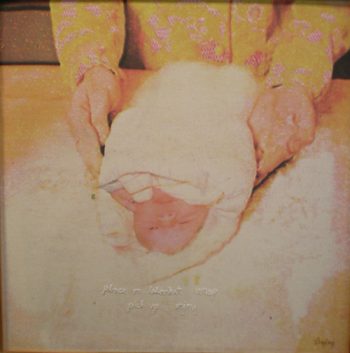 Downy Doxey plays with her medium as much as Adams does, but draws her subjects from more familiar territory so her works appear superficially less unconventional. Unafraid to employ marginal methods, like foil and tissue painting, she usually deploys more than one visible layer of representational technique in each canvas. In an extreme example, the sixteen individual images ganged four by four in “Off the Top of My Head” began as magazine — style headshots made to sell beauty and allure like they were just more consumer products. Each square combines two separate images, one drawn photographically from the original portrait, the other a three-dimensional array of found, consumer-oriented materials arranged to form an independent bas-relief that covers the portrait’s hair. Although the two read together, it is possible (and worthwhile) to rotate the panel in the mind until the “hair” sits on a conventional surface like a tabletop. Only then can the independence of the two combined treatments be appreciated. 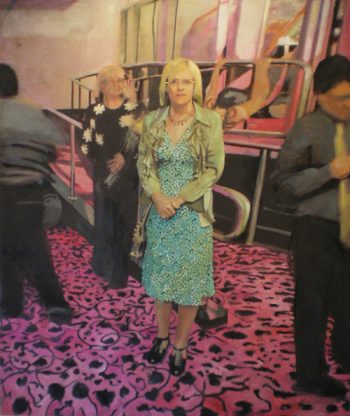 Other works began with photographs of mundane scenes transferred to canvas and then defamiliarized by further rendering. Perhaps the allegory that best demonstrates and sums up Doxey’s point shows up in “Making Bread and Babies.” In this series of nine images of a kitchen work surface, what begins as a how — to sequence on bread — making ends by producing a swaddled baby. Throughout, instructions are sewn into the surface in pale, but richly textured thread lettering. To be sure, if photography, printing, and oil painting can serve the same visual content simultaneously, then a kitchen that serves as the source of meals is also the source of those who consume them. And while the juxtaposition of something edible and a helpless infant may be unsettling, the effect ultimately invokes a mood of wry realism, like Rosalie Sorrel’s song, “This is the day we give babies away with a half a pound of tea …” Knowing that this witty response to the trials of parenting may have begun as an advertising jingle for tea only further illuminates the layering Doxey reminds us underlies it all.

Doxey’s point is a good one, while her luscious palette and identifiable situations keep the work approachable. She wants to be subversive, though her borderline — impressionist brushwork at times takes some of the edge off. It’s a fine line between universality and anonymity, and one that, when she finds it, makes for paintings that don’t just make music: they sing.

Note to Self: Trompe L’oeil Paintings by Shilo Jackson 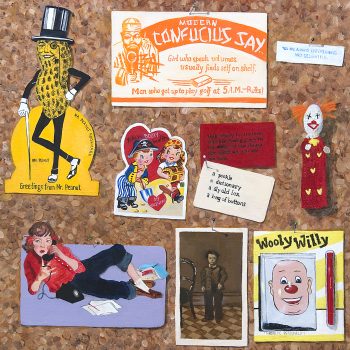 There is a strong tradition of trompe l’oeil painting in America, one that Shilo Jackson invokes in the gallery adjacent to Female Vernacular. While Americans didn’t invent the use of the letter rack, a pre-pushpin bulletin board which, with its collection of mail held by ribbons, appears in European examples, they did take a particular interest in the illusionistic painting of paper ephemera — stamps, postcards, notes, sketches — that Jackson makes her primary subject here. Each of her convincingly illusionistic corkboards represents an imaginary archive, not unlike a backup of a computer’s contents on a specific day, of the visual touchstones that might hang on the wall in a creative person’s workspace.

Most of Jackson’s boards look like aestheticized versions of introspective states projected into public view, while others are clearly spurious. An example of the latter is “Enjoy,” which balances a greeting-card copy of Munch’s “The Scream” with a handwritten reminder to “Pick up mom’s Prozac,” both above a list of prospective band names that include “Emotionally Unavailable.” All have in common an interest in the manifold ways of reproducing appearances, juxtaposing and leveling mechanical reproductions, manufactured originals, and handmade originals. They differ from some classic trompe l’oeils in not setting the goal of duplicating the “natural” feel of things stumbled upon in real life, where placement of the elements would be more haphazard, their alignments less careful, with more overlaps and things hung out of plumb. This is a more deliberate, less naive illusionism. 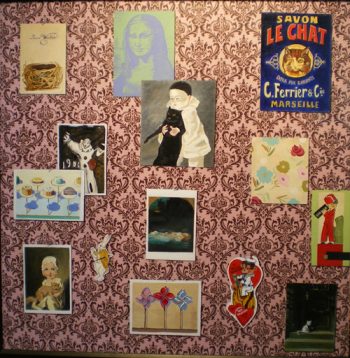 “I Try to Be Refined” by Shilo Jackson

Jackson’s rhetorical purposes can be found in titles that draw on, but modify, words that appear in the paintings. The slip of paper from a fortune cookie says, “You are admired for your adventurous ways,” but “Adventurous Women,” the painting in which it appears, applies the adjective to a vignette created by placing a cutout of Frieda Kahlo next to a postcard of a woman whose portrait Kahlo then appears to be painting. The difference between Jackson and earlier illusionists becomes clear in a complex work titled “They Call It Art.” What appears to be a piece of upholstery fabric hangs, unframed, in a horizontal format wide enough to allow mounting two smaller works on it, side-by-side. One is a copy of van Gogh’s “Bedroom in Arles,” left unfinished to show that it is actually a paint-by-number panel. The other is a trompe l’oeil frame enclosing an entire scenic segment of the tapestry, turning it into a stand-alone picture. A small part of this has been manipulated to suggest that it, too, was painted by the numbers. An earlier artist might have faked the entire tapestry, as Jackson fakes the frame, in receding layers of fakery meant to show that when we thought we had seen through to the real, there was only one more illusion. Their pleasure was in the wink and the nod: in being in the know. Jackson argues that we view authenticity as a matter of degree, not of kind. Since pretty much everything preexists in our cultural imagination, there are few genuinely original experiences to be had.

Since the 1980s the vernacular has increasing come to be viewed in opposition to the dominant language. The contrast between this counterculture and low speech and that of the reigning culture and its official language even has a name: diglossia. But as Adams, Doxey, and Jackson show, visual language offers an immediacy of access that can undermine the forces of division and breakdown the barriers to dialogue and mutual understanding.

The Female Vernacular and Note to Self will be on exhibit at Art Access through August 8.