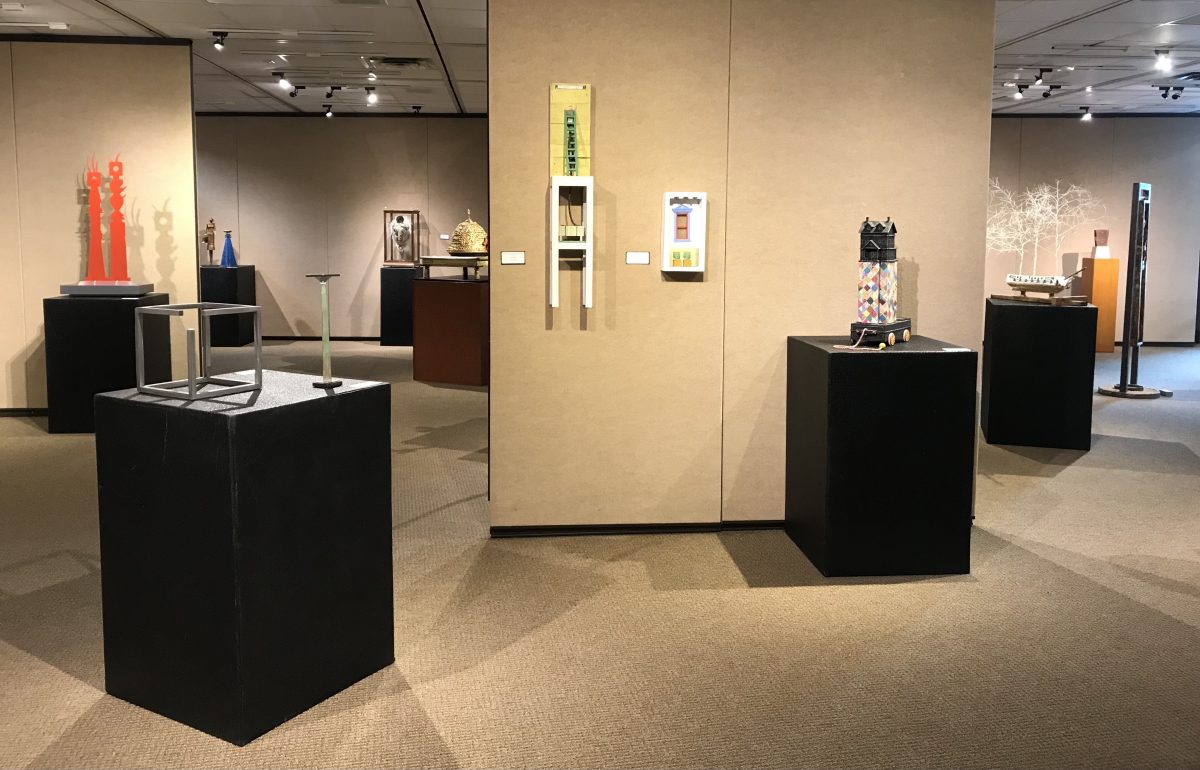 Sixteen months ago, art galleries were among the social venues that shut down in the face of the Covid pandemic. Now they’re successfully reopening, primarily for small or solo shows. More challenging is a survey, like Face of Utah Sculpture, now in its 17th edition, which presents logistic challenges and demands on the many artists who participate. In the past, as many as 50 sculptors have taken part; this year there are 33. 15 Bytes wanted to know how their art has fared after almost a year and a half of isolation.

Suzanne Larson submitted two underwater landscape glass assemblages, which she hand-carried into the Utah Cultural Celebration Center where the show takes place. “Clea on the Cruise,” an ornamental, bird’s eye maple box with a brass-bound, porthole view window, dates for her back to the time when, as an imaginative child, she learned that a Coelacanth ( pronounced SEE-luh-kanth ), a night-feeding fish thought to have been extinct for millions of years, had been found alive in the ocean. Later, after she began to put diaphanous paper wasp nests in all of her works, she found that a pair of these tiny, communal homes could masquerade as aquatic beasts among the pairs of sculpted fish that surround her Coelacanth. No doubt there are other personal stories she could tell about “Cleo on the Cruise,” but her sophisticated glass crafting conjures underwater life just as well for those who haven’t had the pleasure of meeting her. 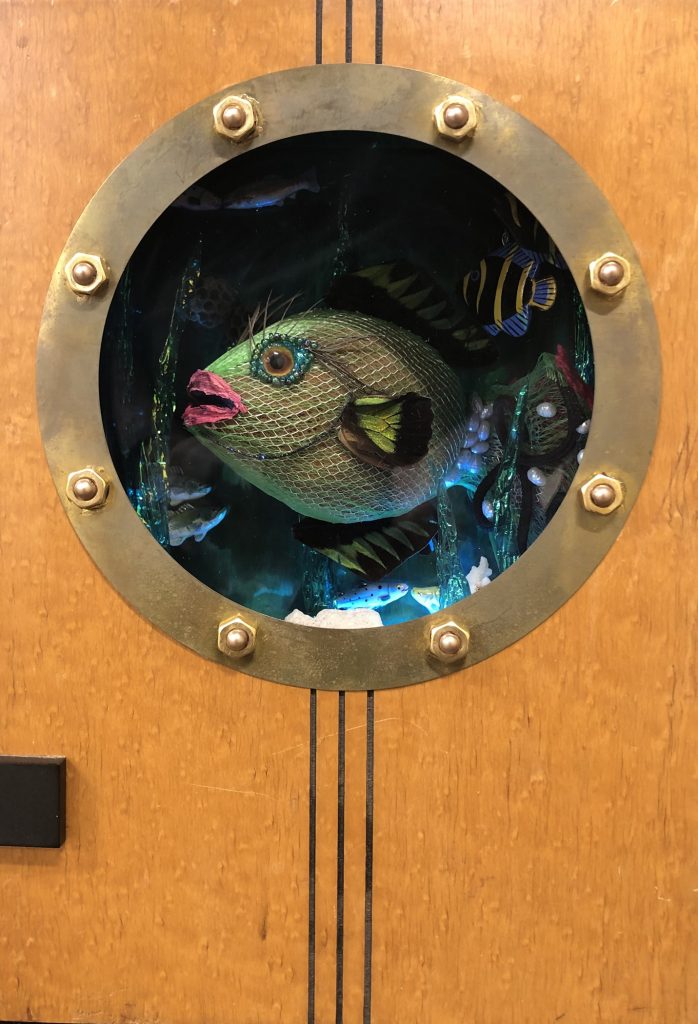 “Clea on the Cruise” by Suzanne Larson

Another sculptor whose work has always leaned towards autobiography is Brad Taggert, a Utah native and BYU graduate who teaches various 3-D and Earth Art-related classes at Snow College. Early on, metal boxes represented the members of his family. While these geometric abstractions pleased the eye, they didn’t reveal as much about family reality as does “A Confluence of Fates,” a tall, narrow relief model, close in size to a human body, of a river that follows a winding, coiled course, not unlike that of a blood vessel, through a classic Utah desert. At first, it appears that two streams flow together into one river. On closer examination, it can be seen that four small streams flow together in pairs to form the two that merge in the center. Small, faint letters name these streams, one of which is “Taggart.” Clearly, this is a family history, shown with converging tributaries instead of tree branches. So instead of branches unnaturally producing a trunk, “Confluence” shows how biological families combine forces as they come together. On the back of the map, held in an open frame, antique photos in sepia fill in what is modeled on the front. 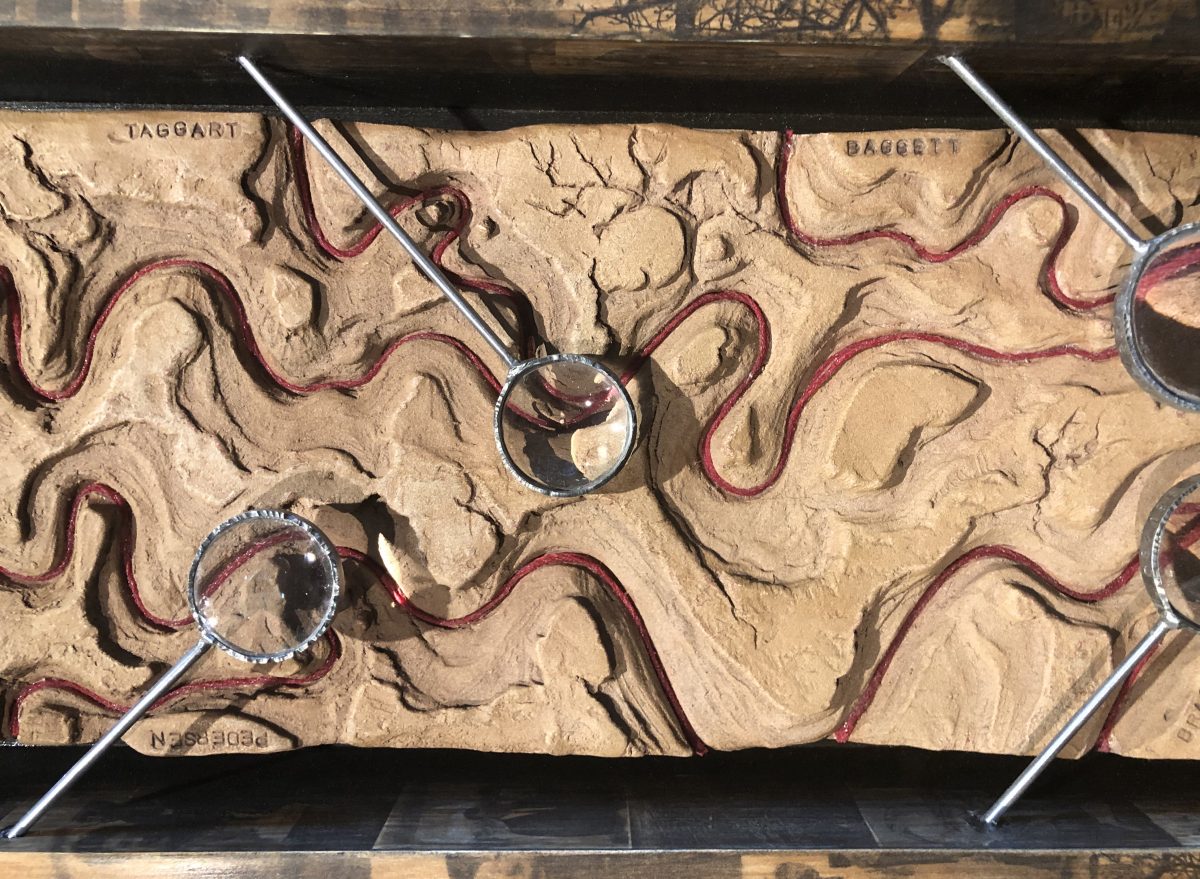 Detail from Brad Taggart’s “A Confluence of Fates”

There are 51 works of sculpture in Faces of Utah Sculpture XVII. They run the gamut, beginning with hyperrealistic works one can still call “statues.” Mike Call’s “Guardian,” a soldier’s image recognizable from today’s news, and “Thunder Chief,” a Native American who might have battled with a previous era’s soldier, are idealized icons. Mark Degraffenreid’s necessarily fictional portrait of Joseph Smith, “Brother Joseph,” and his nude “Mother & Child” at play leave the conventional imagery sold in LDS bookstores far behind. Sculpture can be just this realistic and yet have a metaphorical meaning, like Neil Hadlock’s pair of stones jointed together, perhaps symbolizing the union of marriage. 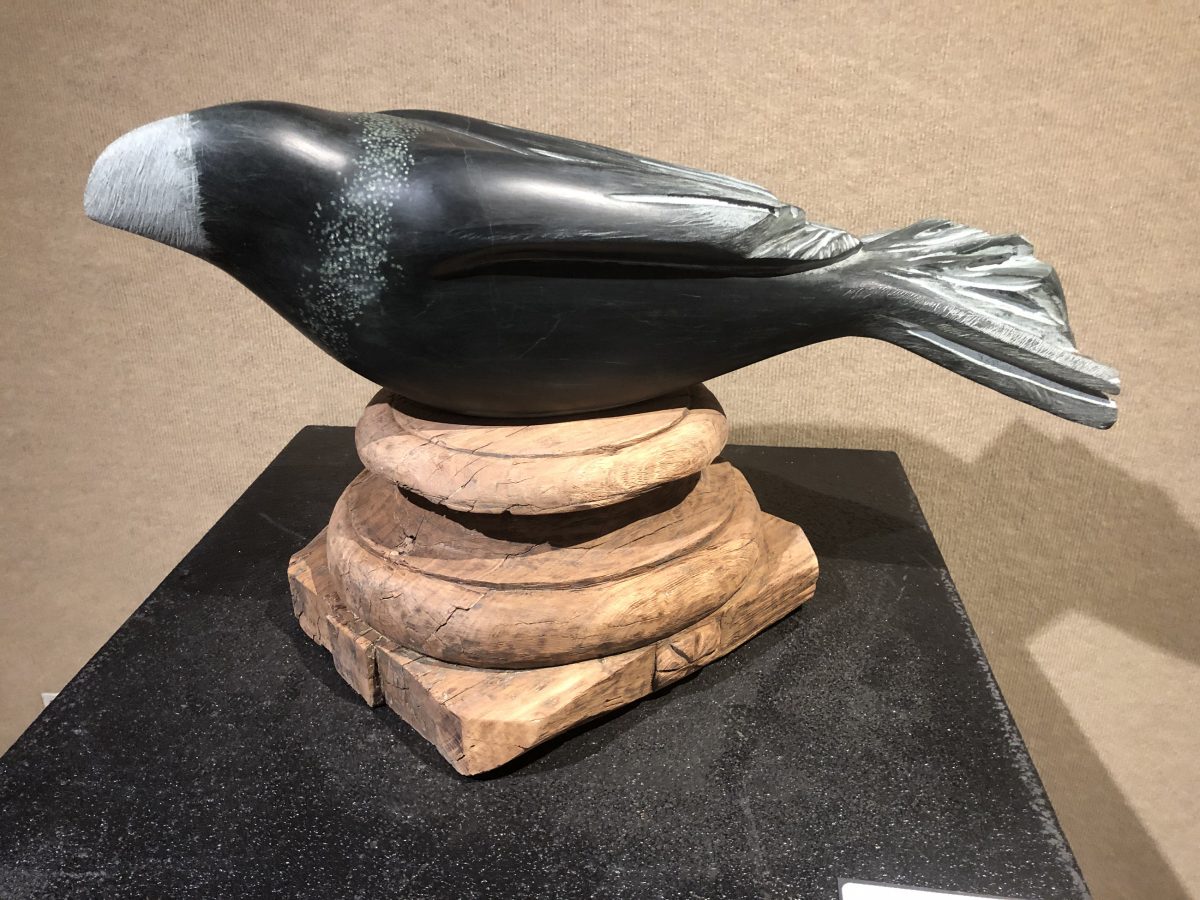 “Of Currents and Clouds” by Dahrl Thomson

At the other extreme are pure abstractions: 3-D representations of ideas, feelings, and mental states. Weston Lambert’s “Fern Ridge” and “Little Bird,” impressive hybrids of petrified wood or agate with glass are visually eloquent, while recalling that so much of the Earth’s mass is silica, an infinitely variable, widely employed, but still underused material. Ryoichi Suzuki’s “Duet” and Nev Pulotu’s “Manaia” are mainstream examples, using stone as a durable, physical manifestation of metaphorical principles. Meanwhile Dahrl Thomson’s symbolically rich birds, the ghostly “Snowy Spector” and the compact “Of Currents and Clouds,” along with Jonna Ramey’s strong female figures, “Source of Power” and “Vulture Eyes the Portland Protest,” self-consciously collaborate with nature by preserving some of the original surface of their stones, much like Japanese woodworking that includes bark and cracks otherwise considered flaws. “Vulture Eyes the Portland Protest,” a personal response to someone who briefly calmed a city full of violence with her vulnerably naked body, shows how the power of sculpture comes from its close connection to objects in the real world.

To celebrate the participation of a class of artists — women, for example — or a medium, like glass, is to marginalize them and scant their contributions. Nobody looking at Amber Egbert’s “Ares Composition” would assume it was made by a woman, but it’s worth pointing out that the influence of the recently re-discovered Jay deFeo is present in Susan Klinker’s “Silver Linings in the Storm,” or that the elaborate surface ornaments of Jeannine Young’s 3-D fashion plates, “The Shopper and Enchanted,” are only part of her command of bronze and stainless steel. Andrew Kosorok’s lantern, “The Starlings Return,” and Kerry Transtrum’s “Head, Heart, Hands” use glass as an indispensable exclamation point in work made largely of traditional metals. On the other hand, Dan Cummings, who founded The Face of Utah 17 years ago, shows what glass alone can do in the hands of a master. “Don’t Forget to Breathe,” his glass version of mokume-gane, in which laminated metals are sculpted and ground flat again to produce patterned colors, which Cummings uses here to represent the turbulence of breath, may be the one truly new glass-working technique of Studio Glass.

The exhibition of art in Utah might look very different if it weren’t for Frank McEntire, who calls on friends, calls in favors, and connects artists, galleries, and writers, and then, when he ought to be exhausted, hauls in his often massive and weighty (in both senses) art to fill out the resulting shows, which (like this one) he helps curate and design, usually without credit. His “Stupahive” combines Utah’s foremost symbol, the beehive, with an Asian world view, two subjects anchored in history but looking to be influential in the future, should humanity have one. “Carriage” reflects on two uses for that word: baby carriage and gun carriage. 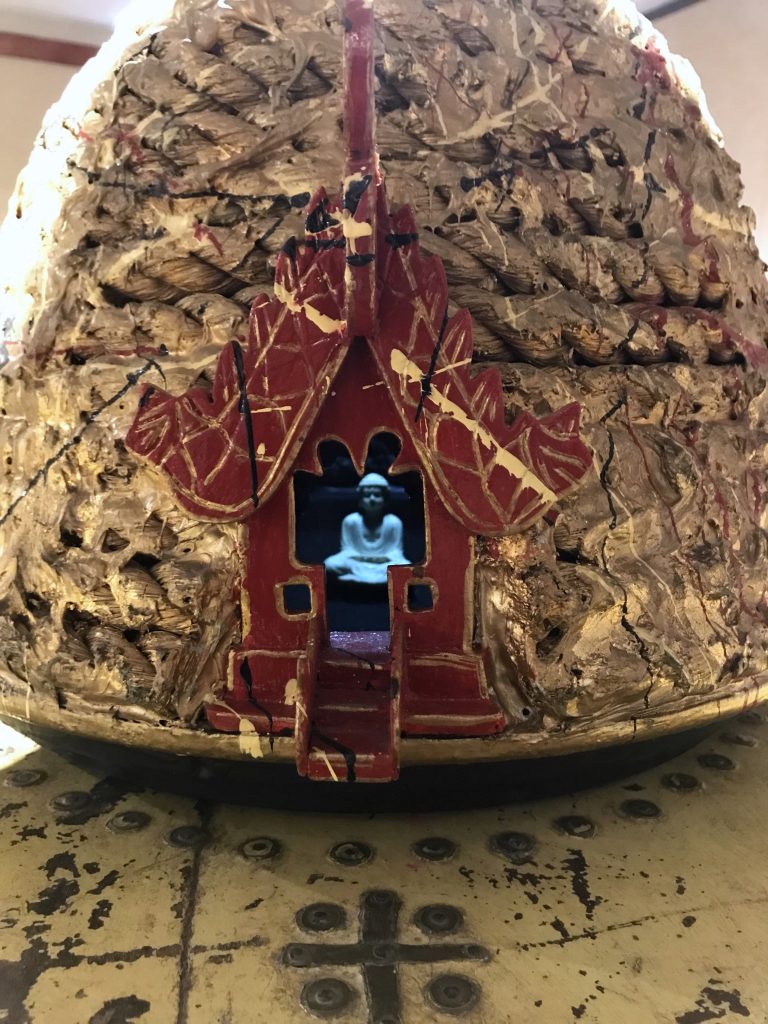 Detail of “Stupahive” by Frank McEntire

Some people read the cards posted next to the art and some don’t. On those cards in Face of Utah Sculpture, “mixed media” appears at least seven times, and again with “construction” tacked on. “Assemblage” appears four times and “repurposed” once. No other technique appears so often. Frank McEntire, who has been called the Grandfather of Utah Assemblage, works in many media, but it’s the new uses he finds for discarded tools and machines that stand out and connect him to a large ‘”school” that includes Zane Anderson (“Adolescent Requiem”), Steve Dayton (“We do Construction but We’re Better with Mustard Plaster” and “Just About, Nearly, More or Less, Practically, Well-Nigh, Can’t Get Over This”), Jason Lanegan (“Primary Structure XVII: House of Living Water” and “Play House”), Adam Larsen (“Irreconcilable Detachment and Drydock Reliquary”), and Vincent Mattina (“A Parrot for a Cyborg Cornwall” and “Covenant”). These artists combine high humor and deep seriousness, oftentimes with an interest in domestic life, at others, topics of general, historical, or environmental interest, so their often quite complex works reward close inspection and long contemplation. They’re also all men, which may be related to the Surrealistic effect of combining finished goods from unrelated sources. 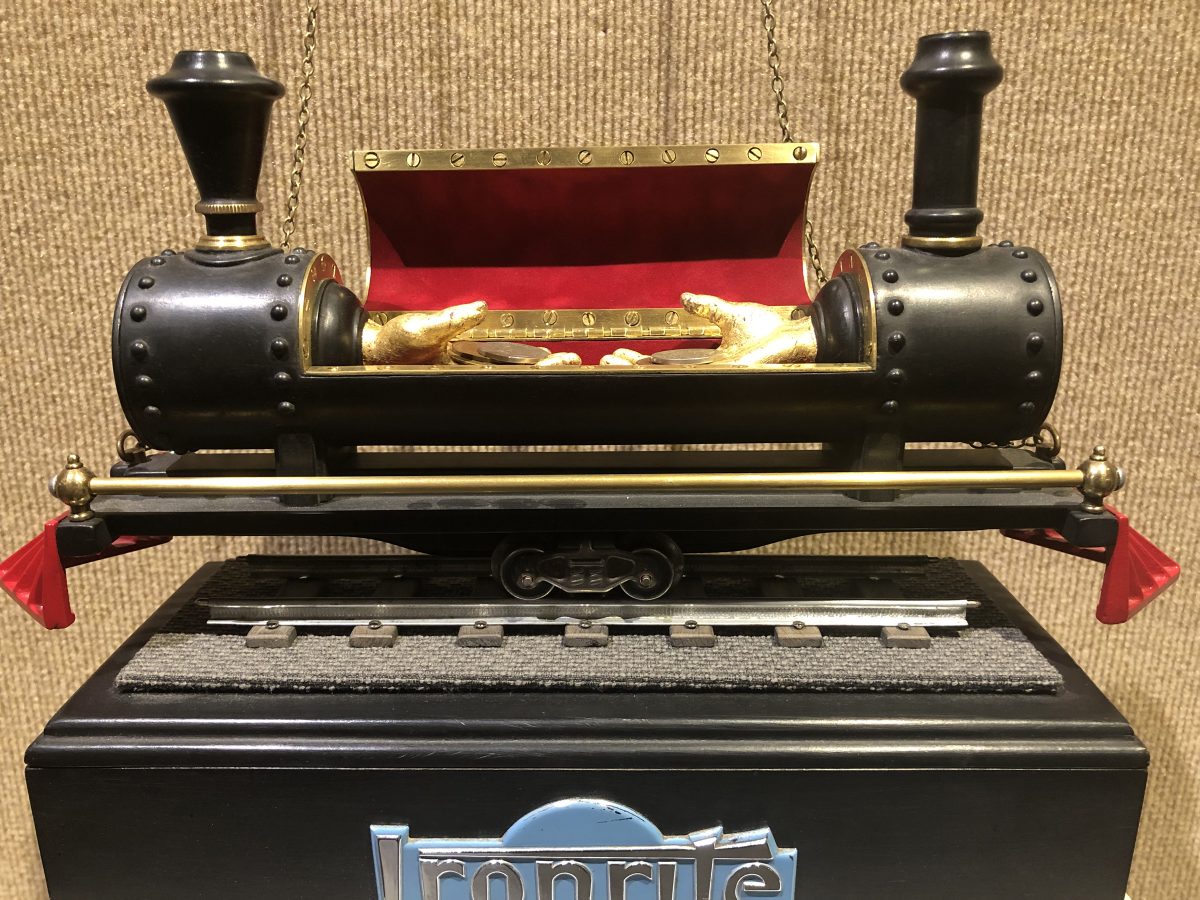 Big movements in Modernism account for quite a few works. Deliberate Surrealism is an essential element in Michael Melik’s irresistible symbioses of plant forms and dream imagery, “Surreal Ivory” and “Dark Thoughts.” The same goes for Rick Prazen’s giant clock, “Window in Time.” Brian Christensen’s “Cretaceous [to] Anthropocene” connects various things, including the Surreal to the Contemporary. Cubism plays a part in Gary Anderson’s “Three Towers” and rust-tinted “Moon Rise.” Darl Thomas invokes architectural detailing in “Tapered Column Green” and the optical illusions of M.C. Escher in “Open Corner,” while in “Blessed by Two Spirits,” David Holz plays with geometry and silhouettes.

The mid-20th century crafts revival is invoked by John Hess’ architectural weaving, “Rondalay,” in Kristena Eden’s clay evocations of the Ancient Ones, “Heart and Home,” and Adam Rees’s amazing “Jumper,” a polymer clay rabbit that could easily play a god in a computer-animated movie. The 21st century announces its presence in Dana Kuglin’s “Wet Dreams . . . the Drive to Recycle,” in which the bronze casings of discarded municipal water meters become fish which, in turn, become a self-portrait of the artist, used pipe standing in for his eyeglasses and the fish becoming his eyebrows.

Due to the Covid-19 shutdown, many artists who might have did not make it to Face of Utah Sculpture XVII, but one who went missing had nothing to do with Covid. Marcee Blackerby’s family suffered a cascade of tragedy last year, beginning with her sudden death. If nothing else, then, this show marks the return of her husband, Ric, not only to exhibiting his unique metal insects (“Watch Me”) and amusing period decor, but accompanying his voice on guitar during the opening party. His recovery marks as heart-warming a turning point as any plague has ever had. With the sculpture survey Face of Utah Sculpture XVII, art declares it has not only survived, but come back as strong as ever.