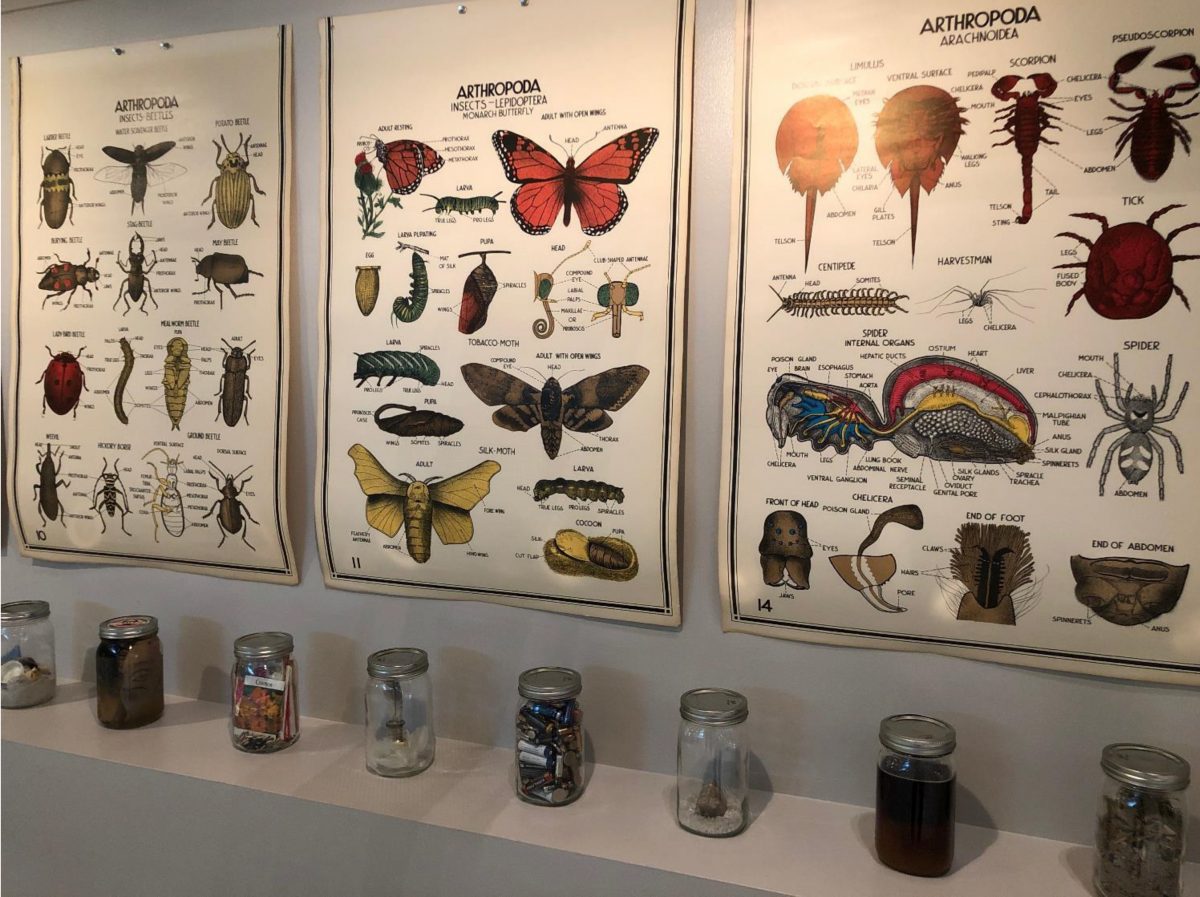 Half a century ago, the children of Frank McEntire’s generation studied science in classrooms that self-consciously resembled laboratories: microscopes stood on tables and gas jets protruded from black, plastic-topped counters. On the walls hung graphic summations of fundamental scientific knowledge: evidence of taxonomy, the original business of sorting, categorizing, and naming the identifiable parts of the natural world. These named facts — which scientists believed in then and still do, despite the way society has lost its way and, seemingly deliberately, fallen back into darkness and confusion — were displayed in posters that sometimes showed surface features, at other times labeled cutaway sections, and sometimes presented both together, training the apprentice scientists’ eyes to read superficial features as clues to what lies beneath.

Twenty eight of these posters form the boundary of Silent Spring and the Anthropocene, showing now until October 9 in the Harris Fine Arts Center Atrium Gallery at BYU. They line the walls, set in niches behind an array of canning jars: familiar Utah icons that double here as lab glassware. Art is expected to transform such mundane objects — to unify the posters’ many specimen images into a grand statement about the unbearable beauty of the natural world. McEntire accomplishes this, but first he recognized how half a century of social and cultural evolution has elevated these once-dry factual statements into something greater. Prior to that, science and art were as distinct as the content and the form of an image. Here and now, McEntire shows us that the inquisitive and expressive spirits are the two faces of human nature, and can readily coexist, just as form and content do, in the very same human works. What concerns him here, as it should every one of us, is how that same human labor has more recently done so much to rend and ruin the unitary fabric of nature, on which we depend.

The jars that run along the lower edges of the posters were each contributed by an invited volunteer. A text explains:

These jars were provided by scientists, artists, philosophers, historians, writers, and others as expressions of their passion for nature and threats to it, such as pollution, rising sea levels, loss of biodiversity, climate change, and radiation and plastics embedded into the geological record.

A couple of the makers have contributed brief statements elaborating the thoughts that went into their jars, but most are left to speak for themselves. It’s to be expected that the majority express their makers’ common anxiety on being faced by a developing reality that, at some point, must inevitably become unsustainable. Others celebrate a halcyon, ideal world that recalls or proposes an alternative option: one that stands in opposition to such environmental threats as rising sea levels and rampant, permanent warfare. If politicians and corporate masters choose to ignore the universe of reaction to environmental danger, it’s clear from the evidence in these jars that many have chosen to think seriously about it.

Frank McEntire is a recognized name and prolific artist, but inexplicable resistance among institutional collections to a permanent display of his work has prevented an audience familiar with his evolution coalescing around it and him. There are ways of art making here that will be familiar to those who have followed him, and which reveal how much his concerns have always centered on the welfare of his fellow humanity. One early and continuing body of work focuses on themes and objects drawn from religious traditions, offering subtle critiques meant to guide viewers away from distractions and back toward original goals, often spiritual, but social as well. These works are energized by his belief that regardless the cultural tradition in which they arose, all forms of worship share similar essential ideals. 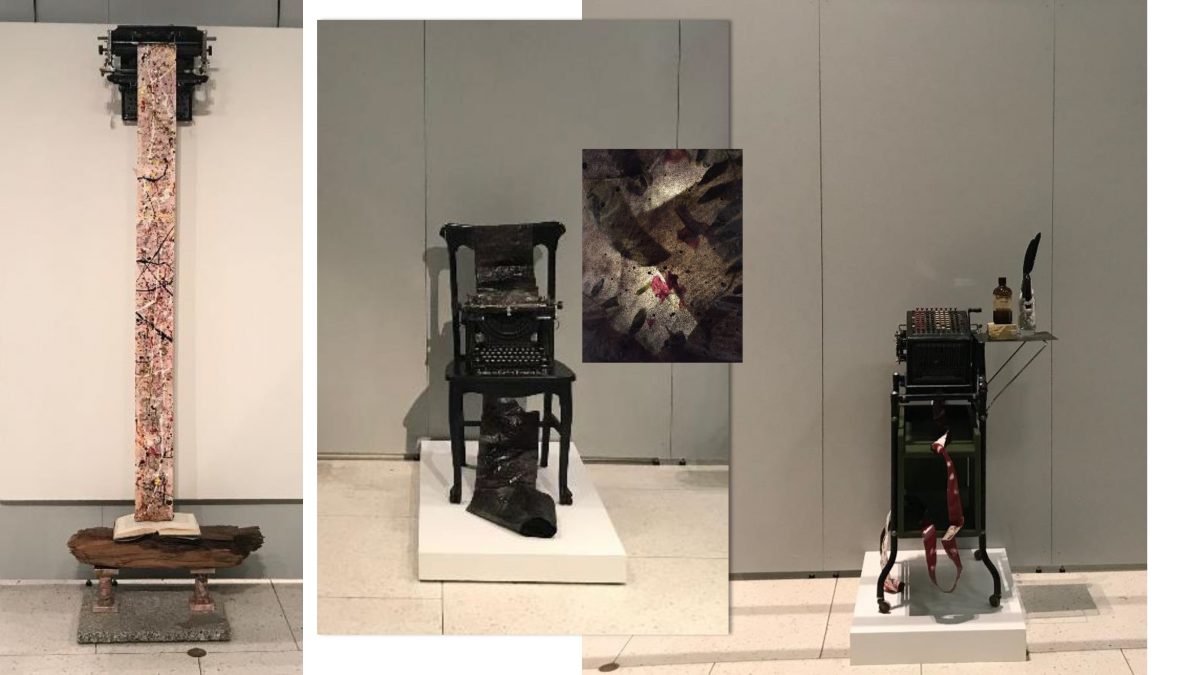 A good example of how his preoccupations have shaped not only the content, but the form of his sculptures and installations is his strong interest in First Response, whether in such spectacular circumstances as the 9/11 attacks, the eighteenth anniversary of which was observed even as this show was opening, or in the equally important, quotidian efforts of firemen, medics, and others who enable society at large to endure and recover from catastrophes, whether natural or human-caused. In this body of work, instead of drawing his initial materials from the world at large, he worked specifically with castoffs from the subject disciplines: protective body armor, breathing apparatuses, and tools designed to destroy any and all impediments to the saving of lives.

In retrospect, it’s clear that throughout these bodies of work, the artist and his approach were evolving. The sardonic humor that many viewers saw in his earlier work, whether it was really there or was an artifact of an artist’s search for an appropriate visual language, has seemingly evaporated, replaced by a somber and more powerful eloquence. Objects such as the canning jars, or the weathered and fragile farming equipment, which once presumably made reference to the Utah milieu, can now be seen to refer to more universal subjects, like the passing of time and the durability of natural facts that, as the saying goes, are the things that even if one doesn’t believe in them, nevertheless remain facts. Two works that, between them, divide the Harris Center’s atrium make this point succinctly. 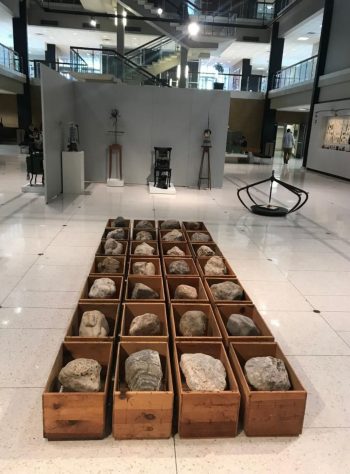 In the center of the space, 28 rough wooden boxes, of the sort that might otherwise contain fruit being harvested from an orchard, each contains and is filled by a large, heavy stone that, in spite of its massiveness, appears to float within it. Arranged in four files of seven each, they invoke the fundamentals of the calendar: seven days in a week, four weeks in a month, even as they repeat the numerical value of the four sets of seven categories of living things set up by the posters surrounding them. Their obdurate, stony natures, living wood surrounding and enclosing bedrock, bring to mind the folkloric observation recalled by Saul Bellow: A fool can throw a stone in a pond that 100 wise men cannot get out. It’s a succinct and appropriate recapitulation of the deliberate, yet unthinking, indeed quite careless way humanity has proceeded in the encounter with nature. The distinction between surmise and reality cannot be stated more clearly than it is by this grid-like field of boxed stones.

Centrally placed on the two long walls, echoing each other and dividing the space into northern and southern hemispheres, the installation’s newest works reach back to one of McEntire’s oldest tropes, the crucifix, here presented precisely life-size. This pair of vertical, wall-hung structures are each formed from a metal litter, an emergency stretcher meant either to lower or to elevate an incapacitated person: one suspended from above. Each is pierced by a utilitarian wooden yoke, fitted with a rude iron hook that belies the promise of aid as it crudely penetrates a global model of the earth. These globes’ oceans are shown in black that, in context, argues for mortality. That the litters are shaped to contain a human body enables them to precisely locate these globes in place of their implied hearts. What could possibly be more important, they ask — and yet the seas, and the planet they enable to live, are surely dying, in danger of extinction.

Essential to a fuller understanding of McEntire’s concerns are the books of Rachel Carson, one of a number of influential nature writers, but the one who, in her best known work, Silent Spring (1962), offered one of the earliest and most eloquent predictions of the coming environmental catastrophe. Some of her books can be found in the installation, while whole chapters have been cut up and used like ashes in so many reliquaries. Carson, who died prematurely in 1964, constitutes for this artist one bookend, so to speak, of a conversation that may also be coming to a premature end, with the arrival of the Anthropocene Era. This latest measure of geologic time acknowledges that humanity has finally come to leave, embedded as if fossilized in the earth’s crust, durable evidence of its presence. If it’s true, then like the dinosaurs, the end of the human era may also be recorded by the silence that follows us in the geologic record, the way the disappearance of the dinosaurs marks a worldwide line as precise as a scalpel’s cut.

It may be trivial to say that, in this historically brief span of time, from the ’60s to the present, Frank McEntire has found his true subject. If the scientific evidence and aesthetic voice he presents are even close to being accurate, it’s not only his art that resonates here, but the fate of the world that has always been, and remains, at the core of his art. 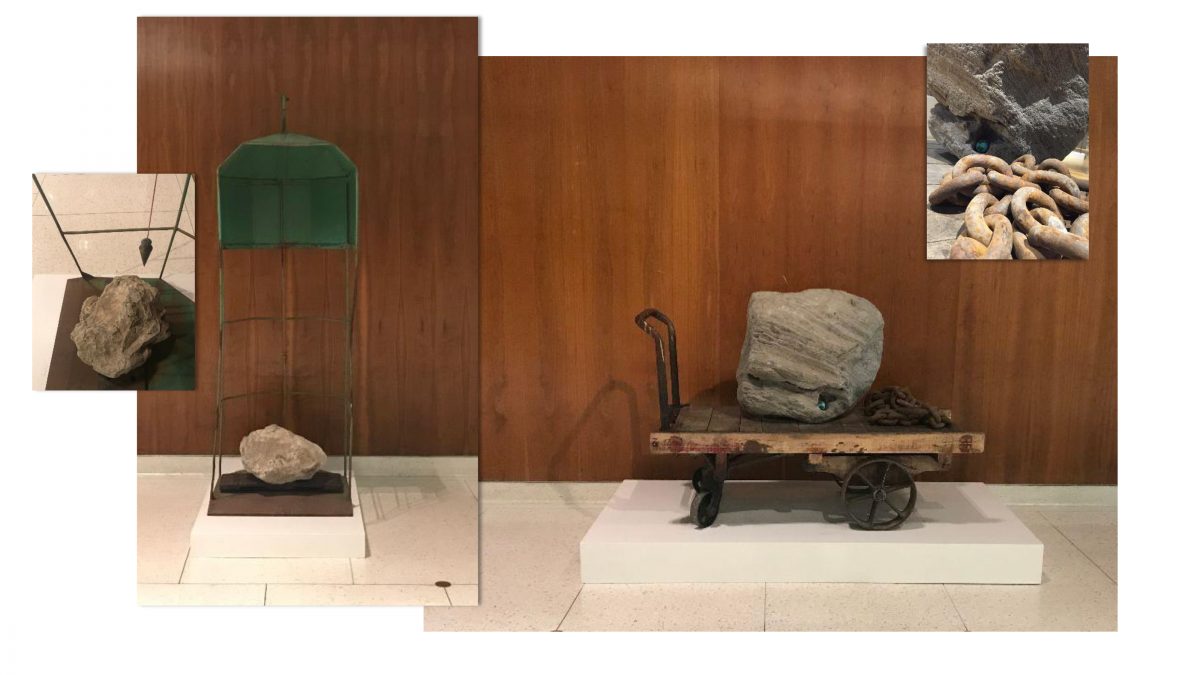